Iran seizes another tank in Straits of Hormuz

May 12: Four vessels – two Saudi, one Norwegian and one Emirati – were attacked in the Gulf of Oman as part of a ‘sophisticated and co-ordinated operation’.

It came as tensions were rising between the US and Iran – who were suspected to have carried out the attacks.

The USS Abraham Lincoln carrier strike group, consisting of the carrier and its carrier air wing, along with one cruiser and four destroyers, had been dispatched to the region earlier that month. 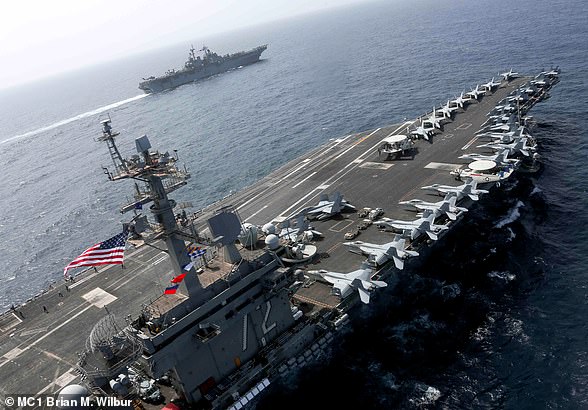 June 13: Two oil tankers were attacked near the Strait of Hormuz, leaving one ablaze and adrift. President Trump blamed Iran for the incidents, which saw 44 sailors evacuated from both vessels. Iran denied involvement. 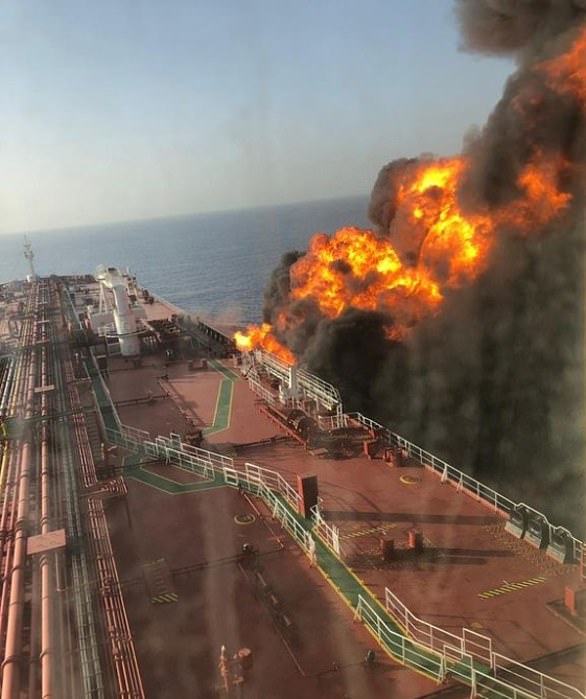 Inferno: A fire rages on board the oil tanker MT Front Altair after it was hit by an explosion in the Gulf of Oman

June 20: A $100million (£78million) US military drone was shot down by Iran. President Hassan Rouhani said the drone had violated the country’s airspace.

President Trump cancelled retaliatory military strikes at the last minute after he was told as many as 150 people could die. 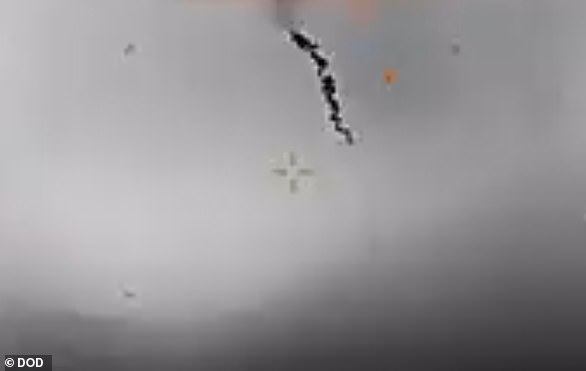 July 4: Britain seizes an Iranian oil tanker the Grace 1 near Gibraltar, accusing it of violating sanctions on Syria.

Royal Marines from 42 Commando boarded the ship by descending on ropes from a Wildcat helicopter and by using rigid inflatable boats, seizing the supertanker, which was suspected of carrying oil destined for Bashar Assad’s Syrian regime.

Iran’s revolutionary guard warned that a British oil tanker could be seized in response. 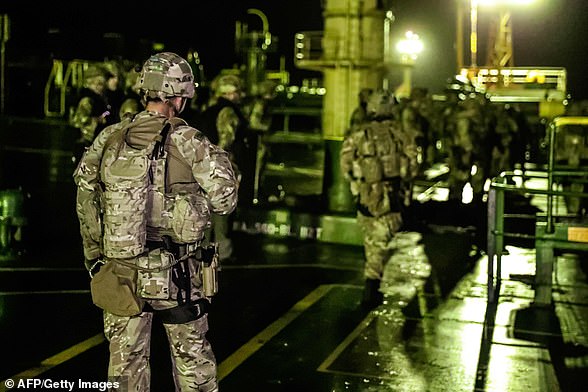 Royal Marines taking part in the seizure of an Iranian oil tanker, Grace 1 in the early hours of July 4, 2019 off the Gibraltar strait

July 10: HMS Montrose, a Royal Navy frigate, fended off three Iranian vessels that tried to stop British Heritage, a commercial tanker that is understood to have been passing through the Strait of Hormuz when it was approached by Iranian vessels.

HMS Montrose came between the vessels, and the Iranian ships turned back after warnings were given. No shots were fired. 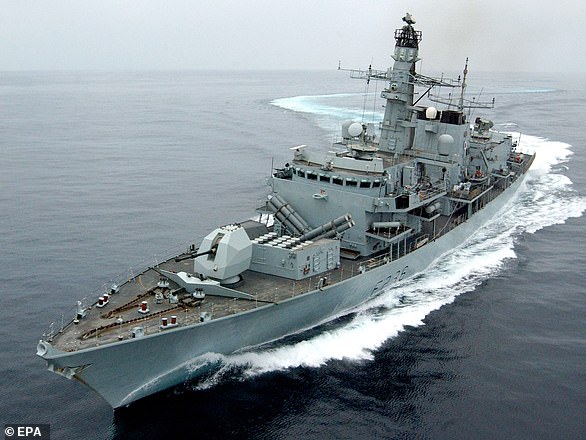 July 11: Gibraltar police revealed they arrested the captain and chief officer of Grace 1 in relation to suspected violations of EU sanctions on Syria.

July 12: HMS Duncan, a Type 45 destroyer, is sent to the Gulf to replace Montrose. 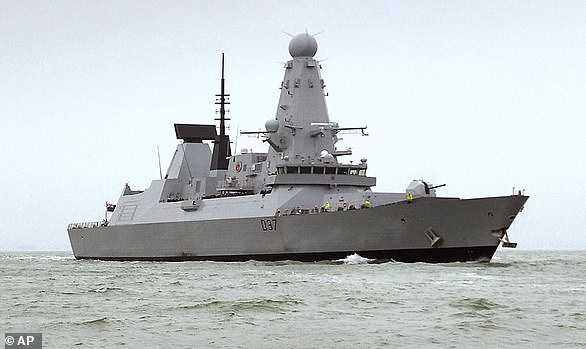 July 17: US officials said cast blame on Iran for seizing a Panamanian-flagged oil tanker from the United Arab Emirates travelling through the Strait of Hormuz.

July 18: Iran confirms it seized the MT Riah, a UAE-based vessel, and claims it was ‘smuggling one million litres of fuel’. The ship had sent a distress call.

US President Donald Trump said the USS Boxer warship had downed an Iranian drone that ignored calls to stand down when it came within 1,000 yards of the vessel.

Iran denied losing one of its drones in the Strait of Hormuz. 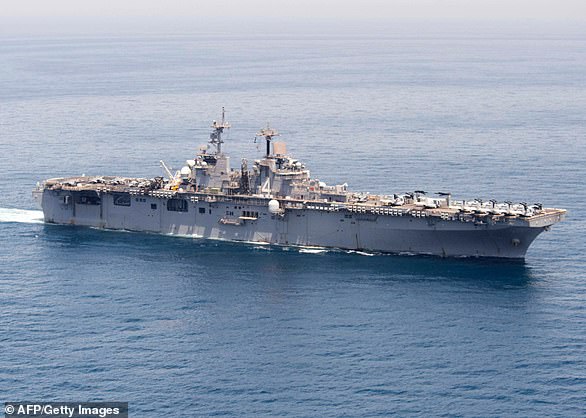 US President Donald Trump said the USS Boxer warship (pictured)had downed an Iranian drone that ignored calls to stand down when it came within 1,000 yards of the vessel

HMS Montrose, which was patrolling the Persian Gulf, was forced to do a U-turn when it received orders to assist the UK-flagged Stena Impero, which had been seized by the Iranian Revolutionary Guard in the Strait of Hormuz.

The Stena Impero was still in Omani waters when the orders were sent, but by the time HMS Montrose arrived the vessel had been taken and redirected into Iranian territorial waters. It’s claimed the Iranians were ready to ‘engage’ the Type 23 frigate. 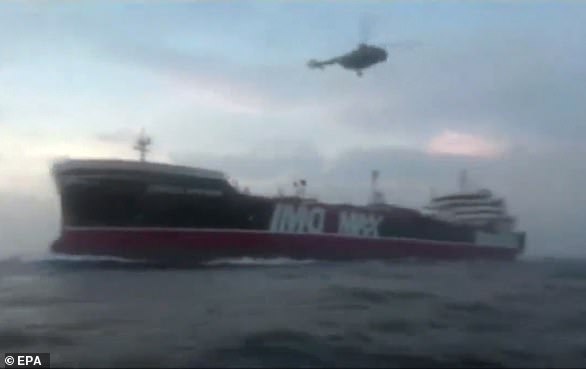 Iran’s seizure of the British ships was a deliberate act of provocation because the ships were in international waters.

It’s thought Iranian authorities seized the British ships in retaliation for the detention of an Iranian vessel by the UK the previous week.

July 21: Iran hoists its flag over the Stena Impero a day after Britain reported Iran to the United Nations. 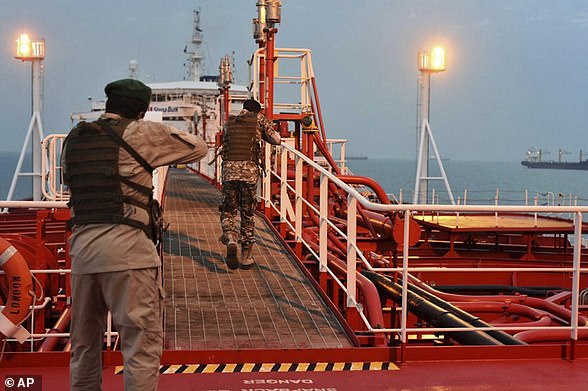 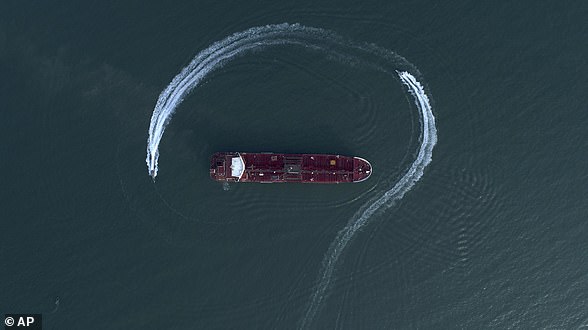 July 28: British destroyer HMS Duncan arrives in the Gulf to replace HMS Montrose. The ship had spent the past 28 days on patrol.

July 29: Iran’s President Rouhani pens an open letter to Boris Johnson, saying he hopes the countries’ diplomatic ties will be stronger under his leadership.

August 4: An Iraqi tanker is intercepted by Iran near Farsi Island and escorted to the south west coastal city of Bushehr. It was accused of smuggling 700,000 litres of fuel.

August 11: Iran’s Revolutionary Guard shared a video in which they claimed to be pursuing a Royal Navy destroyer, but experts reveal it was most likely a UAE vessel. 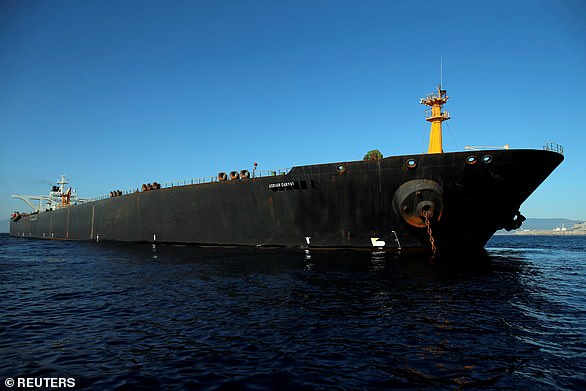 August 12: Type-23 frigate HMS Kent leaves Portsmouth Naval Base to take over duties in the Strait of Hormuz from Type 45 defender HMS Duncan.

August 15: US tries to block the release of the Grace 1 but Gibraltar lets it go on written assurances from Tehran that it would not travel to Syria.

August 17: Iran changes the name of its tanker Grace 1 to Adrian Darya as it prepares to leave Gibraltar the next day. 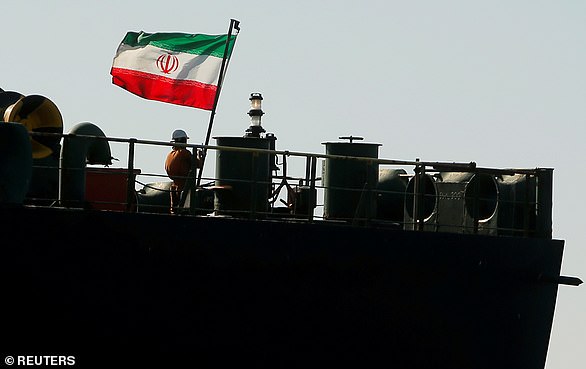