Iran threatens to ‘reverse’ its nuclear deal to ‘pre-deal situation’

Iran has threatened to ‘reverse’ its landmark nuclear pact to a pre-deal situation, after the US urged its European allies to take a tougher stance against the country.

Iran’s atomic energy agency said Monday it could reverse its nuclear programme to its status before limitations were imposed under a 2015 agreement with world powers.

‘If the Europeans and the Americans don’t want to carry out their duties… we will decrease our commitments and… reverse the conditions to four years ago,’ agency spokesman Behrouz Kamalvandi said, quoted by IRNA state news agency.

‘These actions are not out of obstinacy. It is to give diplomacy a chance so that the other side come to their senses and carry out their duties,’ he added.

The threat comes after US ambassador to the EU Gordon Sondland urged European countries to bring Iran ‘back to the table’, and join the US in condemning the country’s actions.

EU foreign leaders have today gathered in Brussels to try to salvage the 2015 deal, which Jeremy Hunt (pictured) insists is ‘not dead yet’ 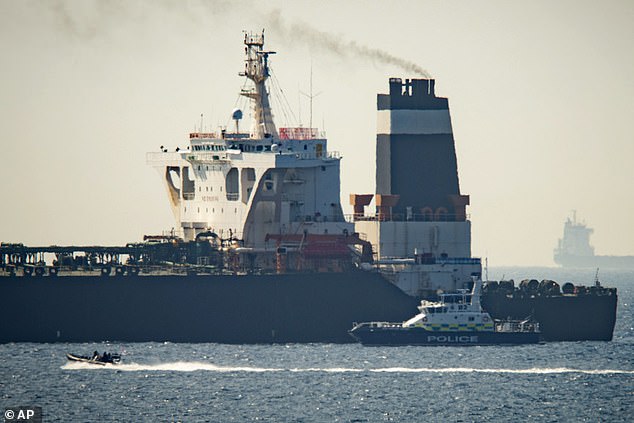 Iran has threatened to ‘reverse’ the Nuclear Deal to a pre-deal situation, after the US urged its European allies to take a tougher stance against the country (Pictured: Seized oil supertanker Grace 1)

EU foreign leaders have today gathered in Brussels to try to salvage the 2015 deal, which Jeremy Hunt insists is ‘not dead yet’.

Iran urged Europe on Monday to take ‘effective’ steps to save the nuclear deal, telling those involved to ‘to take practical, effective and responsible decisions’ to save the landmark agreement.

‘We stress that the continued voluntary and goodwill based actions by the Islamic Republic of Iran are rooted in the principle of reciprocity of rights and duties’ in the nuclear deal, the foreign ministry said in a statement.

The deal promised economic benefits and sanctions relief to Iran, but US President Donald Trump withdrew from the accord in May 2018 and reimposed tough punitive measures against the Islamic republic.

Angered that its beleaguered economy is not receiving sanctions relief it believes it was promised under the deal, Iran has intensified sensitive uranium enrichment work. 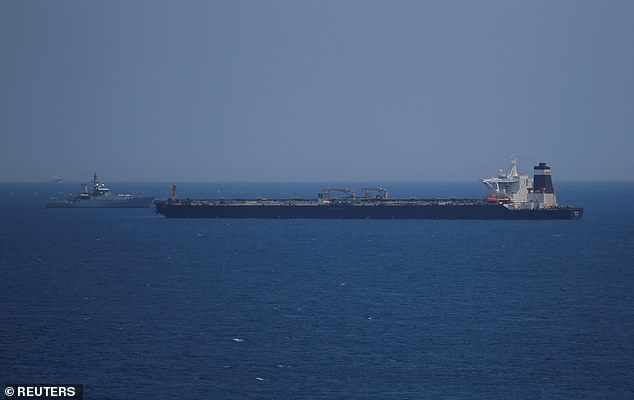 Tensions have been high following the seizure of the Grace 1 Iranian supertanker off the coast of Gibraltar (Pictured: A British Royal Navy patrol vessel guards seized oil supertanker Grace 1)

Tensions have been high following the seizure of the Grace 1 Iranian supertanker off the coast of Gibraltar. The vessel was detained on suspicion of breaching EU sanctions against Syria.

In apparent retaliation, Iranian paramilitary vessels later tried to impede the passage of a British oil tanker through the Strait of Hormuz last week.

Britain has since accelerated the dispatch of the destroyer HMS Duncan to relieve the HMS Montrose, the frigate operating in the Persian Gulf that warned away the Iranian vessels.

Gordon Sondland, the US ambassador to the EU, said: ‘I think that the time for reflection is over.

‘I think it’s time to act, and by acting, I mean that our European friends should join the US in unequivocally condemning Iran’s actions with respect to their malign activities, not just in the Strait of Hormuz but throughout the world, and bring them back to the table to discuss a comprehensive negotiation over all of their activities including currently being the world’s lead state sponsor of terror, plotting attacks in Europe, their missile development programme and their general Middle East aggression.’

On BBC Radio 4’s Today programme he dismissed as ‘complete nonsense’ an assessment by Sir Kim Darroch that Donald Trump decided to pull out of the Iran nuclear deal in an act of spite because it was agreed by his predecessor Barack Obama. 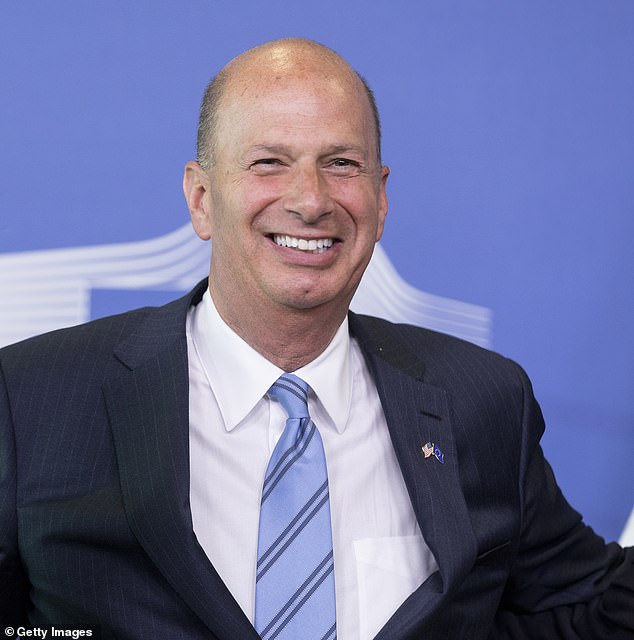 US ambassador to the EU Gordon Sondland (pictured) urged EU countries to bring Iran back to the negotiating table, saying: ”I think it’s time to act, and by acting, I mean that our European friends should join the US in unequivocally condemning Iran’s actions with respect to their malign activities’

Sir Kim resigned as UK ambassador to Washington after his sensitive diplomatic dispatches were leaked and Mr Sondland said Mr Trump’s approach to the Iran deal had been ‘very, very thoughtful’.

Foreign Secretary Jeremy Hunt said on Twitter he wanted to reduce tensions over the seizure of the Grace 1 supertanker, but hinted that Iran would face consequences if it did not abide by the terms of the nuclear deal.

He said: ‘Heading to Brussels for urgent talks on how to reduce tensions with Iran.

‘Their approach to Mid East has been profoundly destabilising but we want to reduce not raise tensions over Grace 1 and avoid a nuclearised region.

In a statement released on Sunday, Britain, France and Germany reiterated their commitment to the Joint Comprehensive Plan of Action (JCPOA).