Iran vows to destroy any country that attacks the Islamic Republic

The commander of Iran’s Revolutionary Guards has warned that any country that attacks the Islamic republic will see its territory turn into the conflict’s ‘main battlefield’.

Guards commander Hossein Salami told a news conference in Tehran: ‘Whoever wants their land to become the main battlefield, go ahead.

‘We will never allow any war to encroach upon Iran’s territory.

Guards commander Hossein Salami told a news conference in Tehran: ‘Whoever wants their land to become the main battlefield, go ahead’ (file)

‘We hope that they don’t make a strategic mistake’ as they have before, Salami said, before listing past US military ‘adventures’ against Iran.

Salami was speaking at Tehran’s Islamic Revolution and Holy Defence museum during the unveiling of an exhibition of what Iran says are US and other drones captured in its territory.

His threats come after attacks on Saudi oil sites, which Riyadh and US officials blamed on Tehran.

The US said yesterday it is sending more American troops to Saudi Arabia and the United Arab Emirates to protect oil infrastructure.

The Pentagon said the deployment would involve a moderate number of troops and would be primarily defensive in nature. 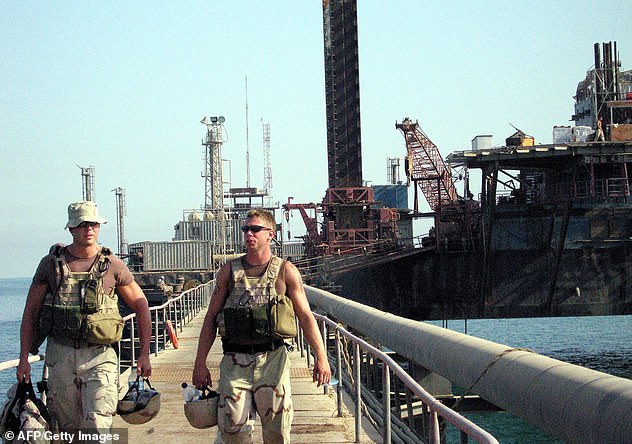 Picture taken 11 October 2005 shows two US seamen, part of the 30-strong US Navy detachment positioned atop the Khor Al-Amaya Oil Terminal. The US announced a new increase in troop deployments to the region on Friday amid tensions with Iran 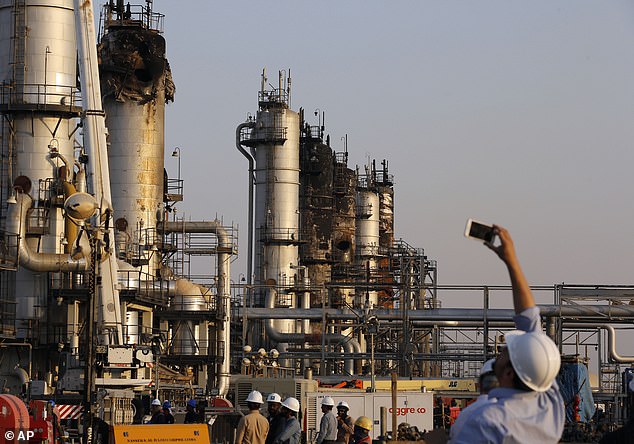 Damage is seen on Friday to Aramco’s oil processing facility after the recent September 14 attack in Abqaiq, near Dammam in the Kingdom’s Eastern Province 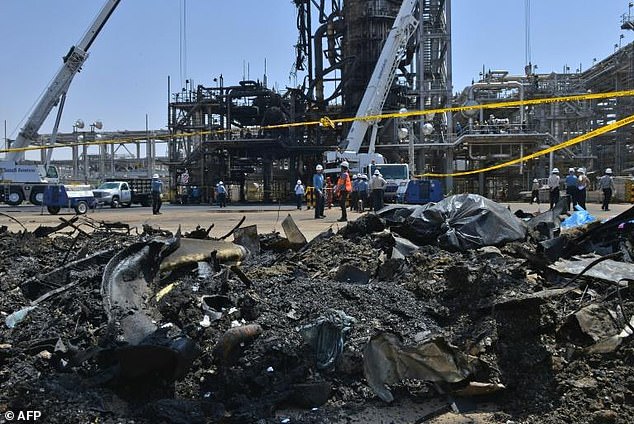 Saudi engineers use cranes to remove the mangled wreckage of production machinery at the Khurais oilfield, one of two facilities hit by dramatic drone and missile strikes last Saturday

But Salami warned: ‘Be careful, a limited aggression will not remain limited. We will pursue any aggressor.

‘We are after punishment and we will continue until the full destruction of any aggressor.’

Iran denies involvement in the attacks, which were claimed by Yemen’s Houthi movement, a group aligned with Iran and currently fighting a Saudi-led alliance in Yemen’s civil war.

Iran’s foreign minister earlier denounced renewed US sanctions against its central bank following the Saudi attacks on September 14 as an attempt to deny ordinary Iranians access to food and medicine, and said the move was a sign of US desperation.

The US on Friday imposed a new round of sanctions on Iran, some aimed at its central bank and sovereign wealth fund.

Foreign Minister Mohammad Javad Zarif said on state television: ‘This is a sign of US desperation … When they repeatedly sanction the same institution, this means their attempt at bringing the Iranian nation to its knees under ‘maximum pressure’ has failed.

‘But this is dangerous and unacceptable as an attempt at blocking … the Iranian people’s access to food and medicine,’ Zarif said, speaking after arriving in New York for the annual UN General Assembly next week.

The deployment of US troops is a first step, Defence Secretary Mark Esper said, and would not rule out additional moves down the road. 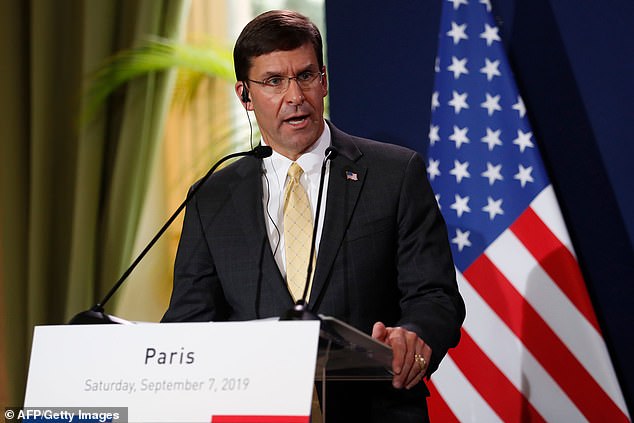 Defence Secretary Mark Esper (file photo) said the new deployment is a first step, and would not rule out additional moves down the road

He said it is a response to requests from the Saudis and the UAE to help improve their air and missile defences.

Other officials said the US deployment would likely be in the hundreds and the defensive equipment heading to the Middle East would probably include Patriot missile batteries and possibly enhanced radars.

Houthi rebels in Yemen claimed responsibility for the attack, but Saudi blamed Iran, which supports the Shiite Houthis against the Saudi-backed Sunni elements in Yemen’s ongoing civil war.

Washington has also pointed the finger at Tehran, condemning an ‘act of war’ which knocked out half of Saudi Arabia’s oil production and sent global oil prices soaring.

Iran has denied involvement and warned the US any attack will spark an ‘all-out war’ with immediate retaliation from Tehran. 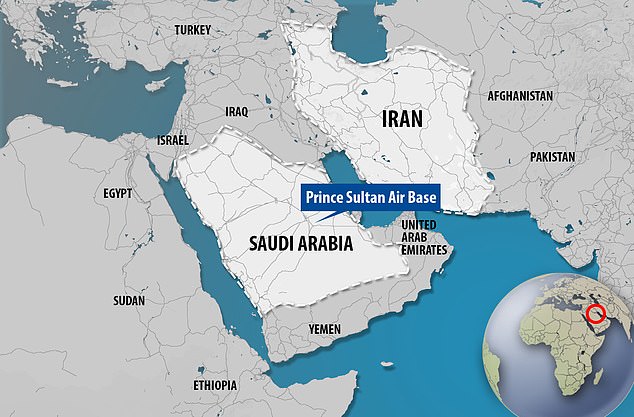 Meanwhile, there were reports on social media that a number of Iranian servers and websites – including those of some petrochemical firms – were under a cyber-attack.

There was no immediate official comment, and the websites of the main state oil company NIOC appeared to be functioning normally.

History of US troop deployments to Saudi Arabia

Saudi Arabia is the nexus of Sunni Muslim power in the Middle East, and is unofficially allied with Israel against their mutual rival, the Shiite Muslim powerhouse Iran.

Beginning during Operation Desert Shield in August 1990, while preparing for the Gulf War, the U.S. sent a large troop contingent to Saudi Arabia.

At one time, Prince Sultan Air Base housed as many as 60,000 U.S. troops, supported by an all-American array of creature comforts like fast-food restaurants and swimming pools.

Following the Gulf War, thousands of U.S. troops remained in Saudi Arabia, many of them supporting the enforcement of no-fly zones over Iraq.

The presence of U.S. troops in Saudi Arabia, which is home to the holiest sites in Islam, provoked vicious objections from Sunni fundamentalists, and was the main stated motivation behind the 9/11 attacks.

U.S. troops remained in Saudi to support the invasion of Iraq in 2003, but following the end of major operations at the outset of the Iraq War the forces in Saudi were quickly withdrawn.

Since 2003, Prince Sultan Air Base has been abandoned, and the only U.S. troops in Saudi Arabia have been a handful of technical and training personnel housed on Saudi-owned bases.

NetBlocks, an organisation that monitors internet connectivity, said its data showed ‘intermittent disruptions’ to some internet services in Iran starting on Friday evening.

But the group said the impact was limited, affecting only specific providers, and the cause was unclear.

‘Data are consistent with a cyber-attack or unplanned technical incident on affected networks as opposed to a purposeful withdrawal or shutdown incident,’ it said in a tweet.

This began when the first reports emerged and ended shortly later, Toker said. The networks have been stable since.

He said the affected networks were all relatively small and only one is a consumer service provider, so there was no massive nationwide impact.

But it is notable that these networks are usually stable, he said.

The fresh sanctions target the Central Bank of Iran, which was already under other US sanctions, the National Development Fund of Iran – the country’s sovereign wealth fund – and an Iranian company that US officials say is used to conceal financial transfers for Iranian military purchases.

Zarif said he would on Wednesday meet foreign ministers of the remaining signatories to the 2015 nuclear accord, which was agreed with Britain, France, Germany, China and Russia as well as the United States.

‘As we have said before, the United States can only attend if it returns to the (nuclear accord) … and ends its economic war against Iran,’ Zarif said.

The United States withdrew from the accord last year and re-imposed unilateral sanctions on Iran.

‘I hope the US government realises that they are no longer the only economic superpower in the world and that there are many countries that want to benefit from the Iranian market,’ Foreign Ministry spokesman Abbas Mousavi said, according to state media.