Iran has warned the US and Israel to expect a ‘devastating’ response after accusing them of being involved in a deadly attack on a military parade in the country.

Funerals have taken place after gunmen killed 25 people, including 12 members of Iran’s elite Revolutionary guards, and wounded 60 at a parade in the southwestern Iranian city of Ahvaz.

But Senior commanders of the Islamic Revolutionary Guards Corps (IRGC) have said the Ahvaz attack was carried out by militants trained by Gulf states and Israel, and backed by America.

‘You have seen our revenge before … You will see that our response will be crushing and devastating and you will regret what you have done,’ deputy IRGC head Hossein Salami said in a speech before the funeral of the victims in Ahvaz, broadcast live on the state television.

Nikki Haley, the US Ambassador to the United Nations, dismissed Iran’s assertion that Washington and its Gulf allies were to blame for a deadly parade attack and said Tehran should look closer to home.

Iranian President Hassan Rouhani also claimed that US backed states in the Persian Gulf were responsible for the assault.

He said:  ‘America wants to cause chaos and unrest in our country so that it can return to this country, but these are unreal fantasies and they will never achieve their goals’.

Responding to Rouhani’s remarks, Haley told CNN: ‘He’s got the Iranian people protesting, every ounce of money that goes into Iran goes into his military, he has oppressed his people for a long time and he needs to look at his own base to figure out where that’s coming from’.

‘He can blame us all he wants. The thing he’s got to do is look at the mirror’.

Haley was asked about comments made on Saturday night after the attack by President Donald Trump’s personal lawyer, Rudy Giuliani.

Today Iran’s supreme leader, Ayatollah Ali Khamenei, also said the attackers were paid by Saudi Arabia and the United Arab Emirates, and that Iran would ‘severely punish’ those behind the attack.

‘Based on reports, this cowardly act was done by people who the Americans come to help when they are trapped in Syria and Iraq, and are paid by Saudi Arabia and the UAE,’ Khamenei was quoted as saying on his official website. 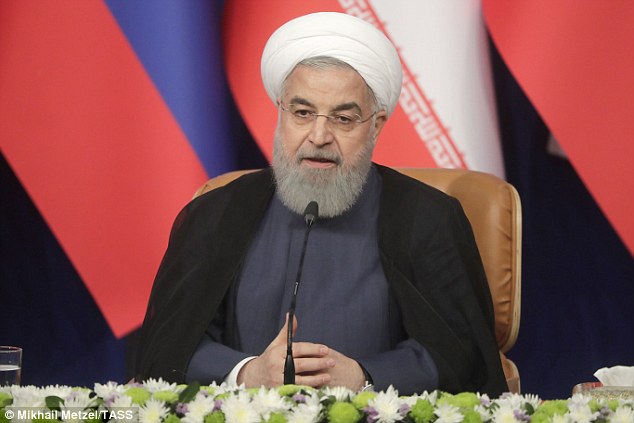 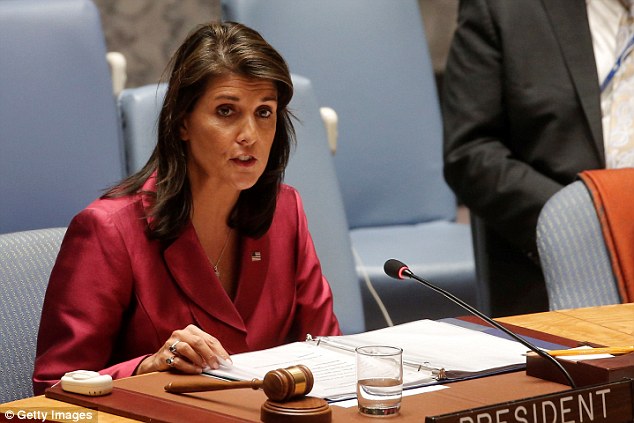 The former New York Mayor told an Iranian opposition group that US sanctions on Iran are leading to economic pain that could lead to a ‘successful revolution’.

Giuliani has made similar comments before on Iran and the State Department has said he does not speak for the administration.

The UN ambassador, without mentioning Giuliani, said: ‘The United States is not looking to do regime change in Iran’.

Trump administration policy does not seek a change of government in Iran even though it is reimposing sanctions that are crippling the country’s economy after Trump pulled out of the 2015 Iran nuclear agreement.

Meanwhile, thousands of people packed the streets of the southwestern Iranian city of Ahvaz to mourn the victims of Saturday’s assault. 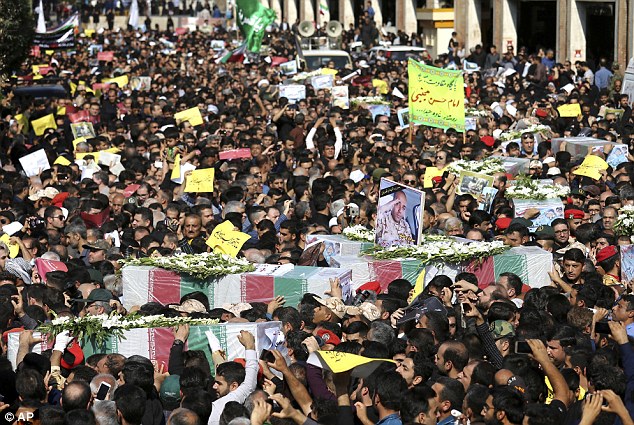 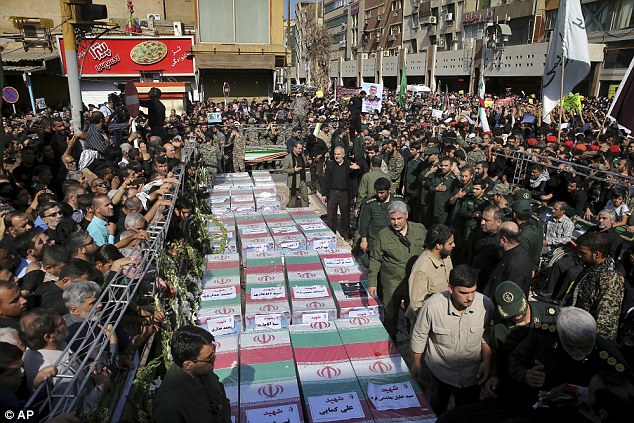 Caskets of those who died in the attack are displayed in Ahvaz, Iran, this morning as thousands gathered for funerals

Others, mainly young people wearing ethnic clothes of the region’s Arab minority, held large photographs of those slain at Saturday’s parade in Ahvaz, the Khuzestan provincial capital, where militants disguised as soldiers had opened fire at marching troops and onlookers.

Of the 25 people killed, 12 were from Ahvaz and the rest from elsewhere in Khuzestan.

The procession walked down the Naderi and Zand Streets, many weeping and beating their chests, a traditional way of showing grief. Mourners played drums, cymbals and horns, according to local Arabic custom.

Cries and wails erupted when the casket of a local Ahvaz hero, 54-year-old Hossein Monjazi, a disabled war veteran and Revolutionary Guard member who had lost a leg and a hand in the Iraq-Iran war of the 1980s, was brought out.

Monjazi was in the wheelchair watching the parade when the gunshots erupted and was unable to find shelter from the hail of bullets.

The attack, one of the worst against the most powerful military force of the Islamic Republic, struck a blow at its security establishment at a time when the United States and its Gulf allies are working to isolate Tehran.

Iran’s intelligence minister, Mahmoud Alavi, said a large network of suspects had already been arrested in connection with the attack, the judiciary’s news agency Mizan reported.