Iran will restart uranium enrichment programme and roll back on key parts of nuclear pact with Britain and other nations unless it is protected from US sanctions, President Rouhani says

By Reuters and Ap

Iran has threatened to resume high-level uranium enrichment within weeks if world powers do not offer new terms in their controversial nuclear deal.

Washington restored the punitive measures last year after Donald Trump pulled the U.S. out of the 2015 pact.

Iran wants help from Europe to bypass the sanctions but said today it would ramp up enrichment if such help did not materialise.

Its threat today sparked a backlash from Israel, where Benjamin Netanyahu warned he would ‘not allow Iran to obtain nuclear weapons’.

Hassan Rouhani, President of Iran, has threatened to roll back on key parts of the nuclear pact still in effect with the UK, Russia, China, Germany and France following US sanctions 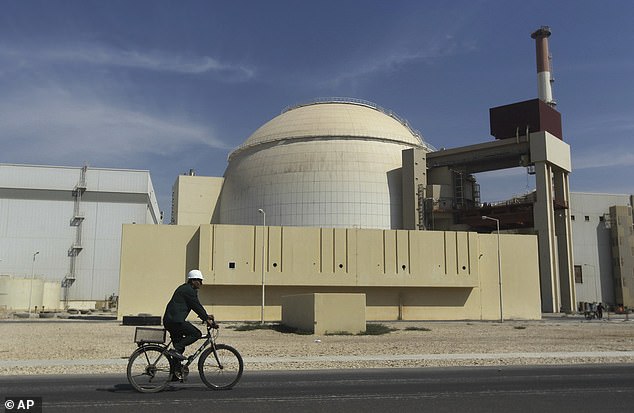 Netanyahu, who has accused Iran of breaching the deal, said Israel ‘will continue to fight those who seek to take our lives’.

Meanwhile Russia blamed ‘irresponsible behaviour’ by the U.S. for the breakdown of the nuclear deal.

President Vladimir Putin has repeatedly warned there would be consequences for ‘ill-advised’ steps taken by the U.S. against Iran.

France’s defence minister said she wanted to keep the nuclear deal alive and warned Iran it could face more sanctions if it did not honour its part of the deal.

‘Today nothing would be worse than Iran, itself, leaving this agreement,’ Florence Parly told BFM TV.

Rouhani’s address to the nation came on the anniversary of President Donald Trump’s decision to withdraw the US from the atomic accord.

The Islamic Republic’s leader said Iran wanted to negotiate new terms with remaining partners in the deal, but acknowledged that the situation was dire.

‘This surgery is to save the (deal), not destroy it,’ he said.

The 2015 deal saw sanctions on Iran lifted in exchange for limits on its nuclear programme. After the US withdrew from the accord it restored crippling sanctions on Iran, exacerbating a severe economic crisis.

‘If the five countries join negotiations and help Iran to reach its benefits in the field of oil and banking, Iran will return to its commitments according to the nuclear deal,’ Rouhani said. 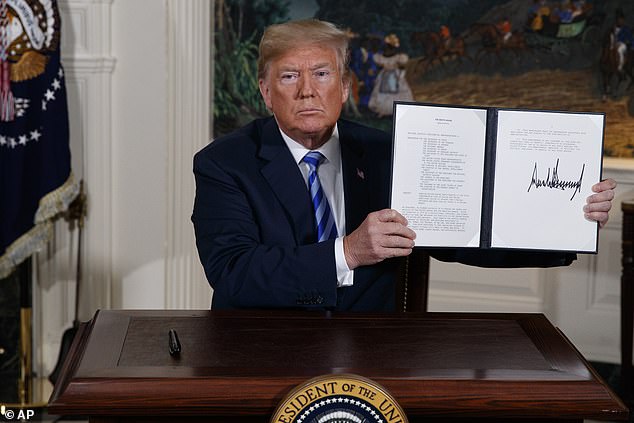 Rouhani spoke out on the one-year anniversary of Donald Trump tearing up the Iran nuclear deal, which was a signature policy of his predecessor Barack Obama

There was no immediate response from the US. The White House said on Sunday that it would dispatch an aircraft carrier and a bomber wing to the Persian Gulf over what it described as a new threat from Tehran.

The US last week ended deals allowing Iran to exchange its enriched uranium for unrefined yellowcake uranium with Russia, as well as it being able to sell its heavy water to Oman.

Currently, the accord limits Iran to enriching uranium to 3.67 per cent, which can fuel a commercial nuclear power plant.

Weapons-grade uranium needs to be enriched to around 90 per cent. However, once a country enriches uranium to around 20 per cent, scientists say the time needed to reach 90 per cent is halved.

Iran has previously enriched to 20 per cent.