An Iranian woman is feared to have become the first migrant to die crossing the channel after she fell overboard on Friday – amid reports migrants are being forced into overcrowded small boats at gunpoint.

More than 1,2000 people are thought to have attempted to make the dangerous crossing this year, often on small overcrowded boats.

The woman is missing and presumed drowned after a boat carrying 20 migrants, including some children, ran into trouble in poor weather conditions.

More than 1,2000 people are thought to have attempted to make the dangerous crossing this year, often on small overcrowded boats. Pictured is a file photo of Dover

A search and rescue operation involving British and Belgian boats and helicopters was mounted on Friday but was called off on Saturday afternoon.

The 19 surviving migrants were made up of 14 Iranians and five Iraqis. Four children were on the boat.

An immigration source told the Times that the woman’s family said was ‘a bright, intelligent woman with a PhD who wanted to start a new life’.

Many of the migrants who are crossing the channel in unsafe vessels are forced onto the boats at gunpoint, the Times reported.

Authorities in France and the UK are searching for the people smugglers involved, who are thought to have made tens of thousands from the fatal journey.

Trying to enter the UK in small boats crossing the channel is a more expensive route of illegal migration and is often used by Iraqis and Iranians, who tend to be more affluent than other migrants.

Organised criminal groups have tried to take over channel crossings as they are seen as money makers, with people smuggling gangs from Albania and Iraqi Kurdistan identified as key players. 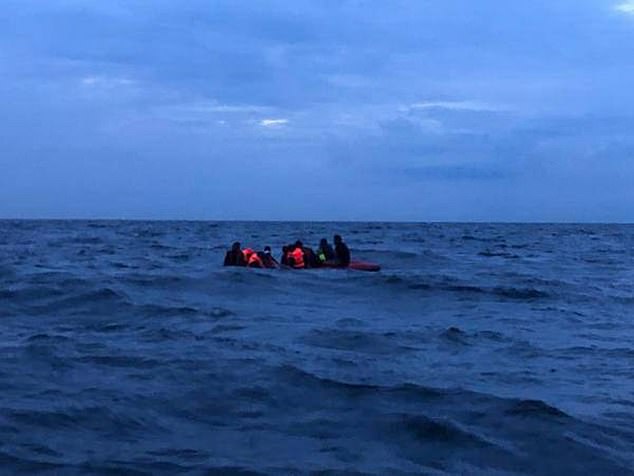 An Iranian man was jailed for two years in France earlier this summer for selling boats to people smugglers.

A law enforcement source told The Times: ‘We have heard stories of coercion and gun threats and there is no doubt that people-smuggling gangs are involved.

‘But we also have to be wary that some people may have been coached about what to say when they arrive in the UK.’

Guns and knives have been used to force migrants, who can pay up to £15,000 for the journey, onto dangerous boats.

A Home Office spokesman said: ‘Our thoughts are with the family and friends of this woman at this terrible time.

‘The Home Office will continue to liaise with other agencies as the investigation into this incident continues.

‘Crossing the Channel in a small boat is a huge risk. The criminal gangs who perpetuate this are ruthless and do not care about loss of life.

‘We thank all the agencies at home and abroad who led the rescue attempt.’