Iran’s supreme leader Ayatollah Ali Khamenei has called for countries in the region to bolster ties to overcome turbulence caused by the presence of the US and its allies.

On Sunday he tweeted: ‘The current situation… demands – more than ever before – strengthening of relations between countries in the region as well as avoiding influence of foreigners.’

His olive branch to Iran’s neighbours in the Middle East was a retaliation to Donald Trump warning the regime against killing protesters who have risen up over the country’s Revolutionary Guards’ downing of a civilian airliner, which killed 176.

The US President tweeted: ‘To the leaders of Iran – DO NOT KILL YOUR PROTESTERS. Thousands have already been killed or imprisoned by you, and the World is watching.

‘More importantly, the USA is watching. Turn your internet back on and let reporters roam free! Stop the killing of your great Iranian people!’ 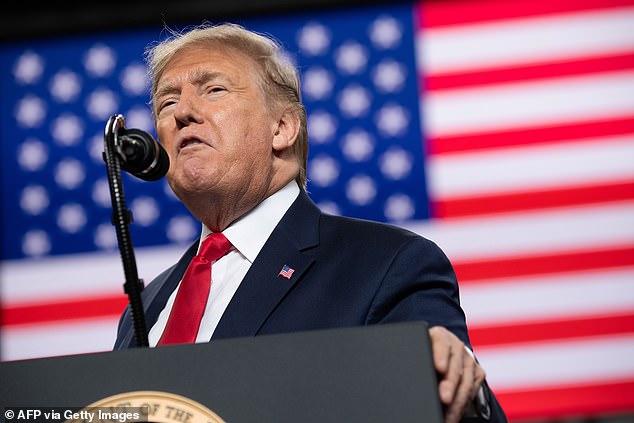 Donald Trump today urged Iran against killing protesters who have risen up over the country’s Revolutionary Guards’ downing of a civilian airliner, which killed 176 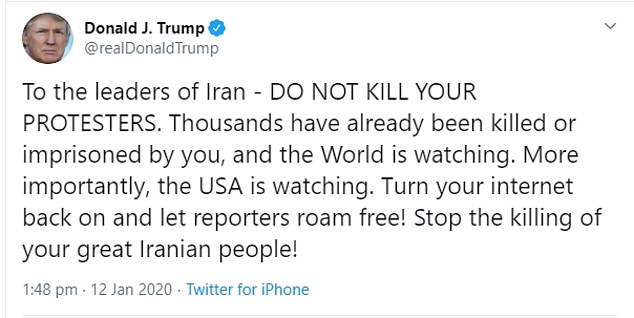 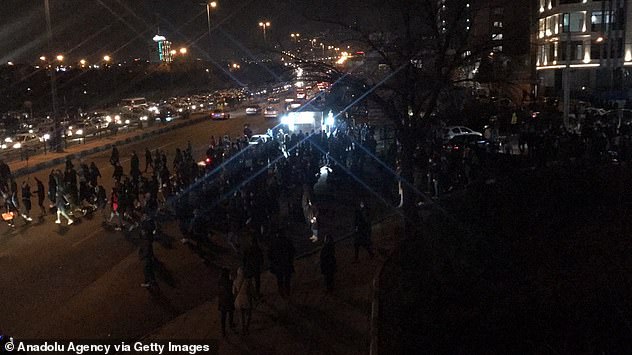 In an interview with CBS’s ‘Face the Nation’ just before the tweet, US Defense Secretary Mark Esper said Trump was still willing to hold talks with Iran’s leaders.

‘We’re willing to sit down and discuss without precondition a new way forward, a series of steps by which Iran becomes a more normal country,’ Defense Secretary Mark Esper said on CBS’s ‘Face the Nation’.

And if something happened to the protesters? Esper replied: ‘The president has drawn no preconditions other than to say we’re willing to meet with the Iranian government.’

Long-standing US-Iran tensions have soared since January 3 when missiles fired from a US drone killed a top Iranian commander, Qassem Soleimani, near Baghdad’s airport.

Iran responded with a barrage of missiles at two US bases in Iraq, inflicting no casualties in what was seen as an attempt to prevent a spiral of escalation.

But hours later, an Iranian Revolutionary Guard unit shot down a Ukrainian passenger jet shortly after takeoff from Tehran.

The death of all 176 people aboard and Iran’s belated admission its forces mistook the plane for a cruise missile has set off angry protests against the regime.

The British ambassador to Iran was briefly arrested Saturday after attending a memorial service for the victims at Tehran’s Amir Kabir University. 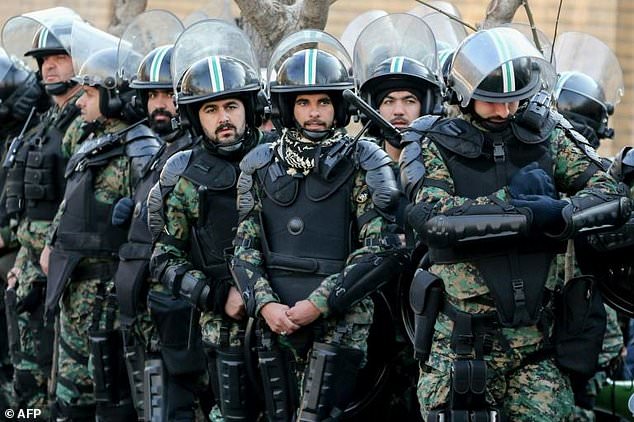 ‘I just think you see a very corrupt regime that the Iranian people are finally standing up and trying to hold them accountable,’ Esper said.

‘They are reeling from their incompetence in this situation. And the people of Iran are just fed up with it,’ he said on ABC’s ‘This Week’.

‘Iran is being choked off, and Iran is going to have no other choice but to come to the table.’

Trump late Sunday slapped O’Brien down, saying, ‘Actually, I couldn’t care less if they negotiate. Will be totally up to them.’

Meanwhile, said Esper, the US believes it has disrupted the plots that it says precipitated Soleimani’s killing, and expects no further Iranian retaliation.

Esper and O’Brien defended the intelligence that led the administration to claim Soleimani was plotting imminent attacks on US troops and diplomats in the region.

But other than in the case of the US embassy in Baghdad, Esper would not confirm Trump’s claim that four US embassies in the region were among Soleimani’s targets.

Asked if there was specific evidence in the intelligence to support the claim, Esper said, ‘I didn’t see one with regard to four embassies.’ 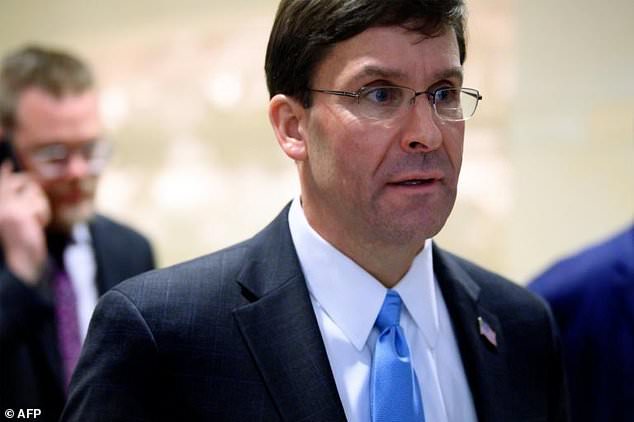 The administration has come under fire from Democrats — and at least two Republican senators — for refusing to share the intelligence with members of Congress.

Senior congressional leaders — the so-called Gang of Eight — were briefed January 8 as skepticism mounted about the administration’s rationale for a killing that raised the risk of war with Iran.

‘We had exquisite intelligence and the intelligence showed that they were looking at US facilities throughout the region,’ O’Brien said on NBC’s ‘Meet the Press’. ‘The threat was imminent.’

Adam Schiff, chair of the House Intelligence Committee, said there was no discussion in the briefing given to the Gang of Eight about plots against four embassies.

‘In the view of the briefers, there was plotting, there was an effort to escalate, a big plan, but they didn’t have specificity,’ he said.

‘So when you hear the president out there on Fox, he is fudging intelligence,’ he said on ‘Face the Nation’.

House Speaker Nancy Pelosi said the congressional leadership should have been informed of the strike against Soleimani in advance.

‘I don’t think the administration has been straight with the Congress of the United States,’ she said on ‘Meet the Press’.