Iran’s president has called for a ‘decisive’ crackdown on the mass protests that have sent the Islamic theocracy reeling over the past week after the death in custody of a woman detained by the Islamic Republic’s morality police.

The call for harsh measures come as the country’s ayatollahs scramble to get to grips with violent countrywide demonstrations that have seen at least 50 killed in more than 80 cities and hundreds arrested, according to a report by an Iranian human rights group.

The protests broke out in north-western Iran a week ago at the funeral of Mahsa Amini, a 22-year-old Kurdish woman who died after falling into a coma following her detention by morality police enforcing hijab rules on women’s dress.

State media quoted President Ebrahim Raisi on Saturday as saying Iran must ‘deal decisively with those who oppose the country’s security and tranquillity’.

Raisi was speaking by telephone to the family of a member of the Basij volunteer force killed while taking part in the crackdown on unrest in the north-eastern city of Mashhad.

The president ‘stressed the necessity to distinguish between protest and disturbing public order and security, and called the events … a riot,’ state media reported.

Iranian state television put the number dead at 35 during the weeklong demonstrations, with protest spreading to most of the country’s 31 provinces.

On Friday, state-organised rallies took place in several Iranian cities to counter the anti-government protests, with marchers calling for the execution of rioters and bearing posters with the phrase ‘We are obedient to the leader.’ 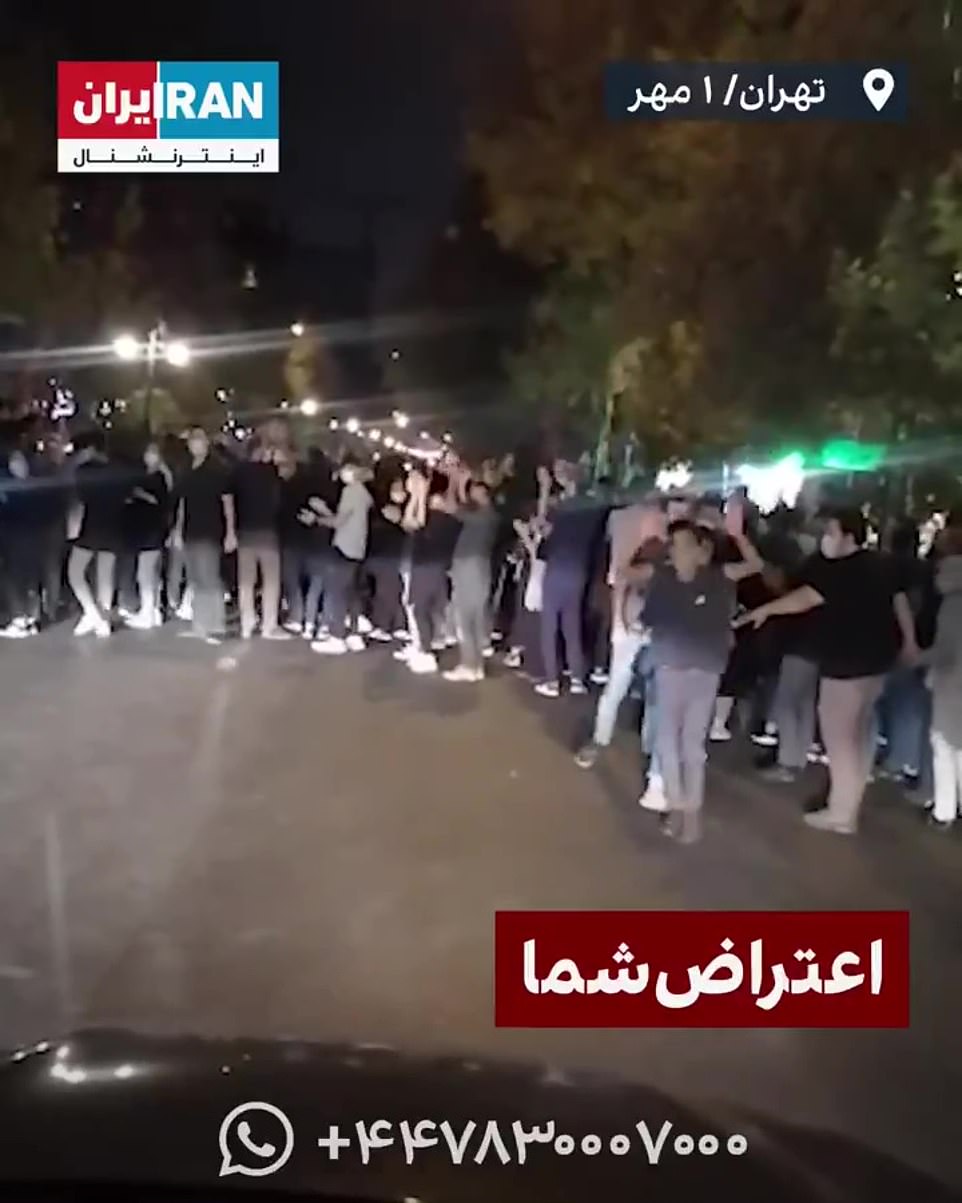 Trouble has flared all over Iran, being recorded in every single province. The capital of Tehran, home to nearly 9 million people, has seen some of the most intense riots 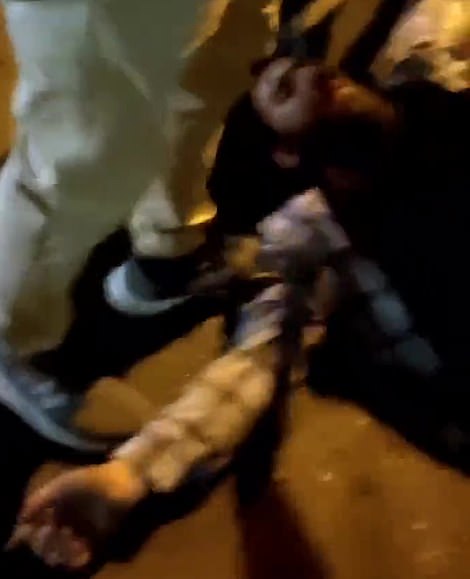 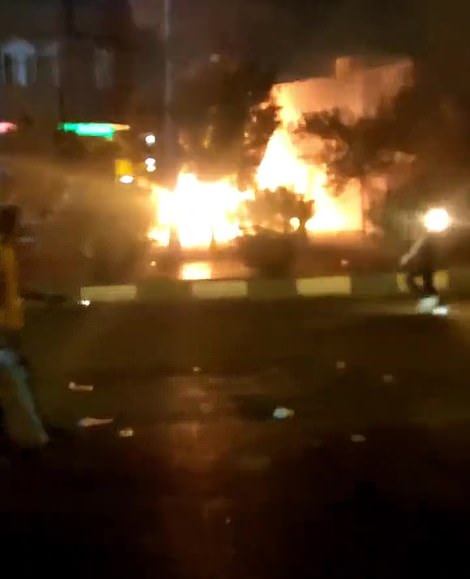 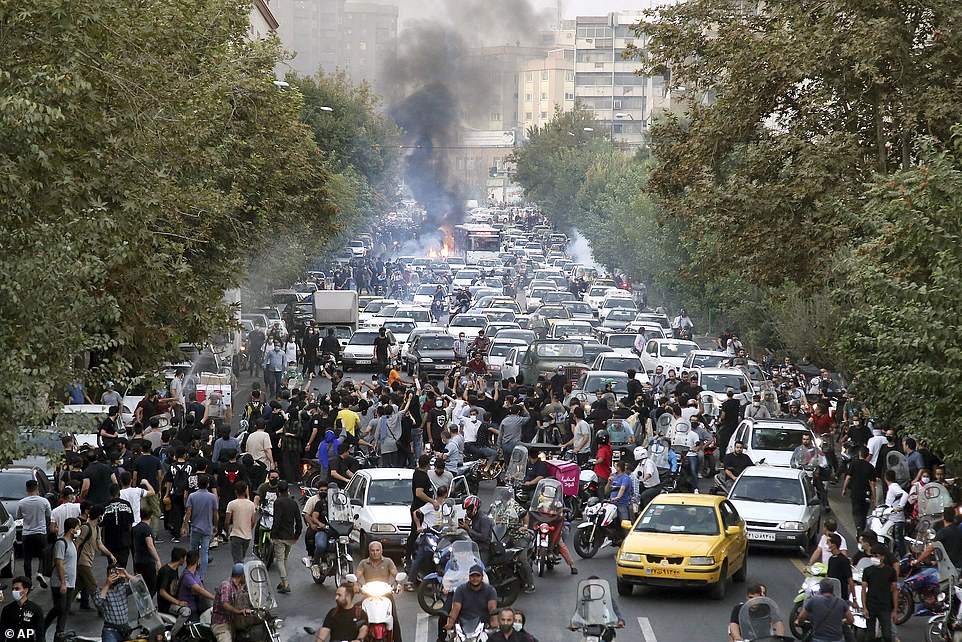 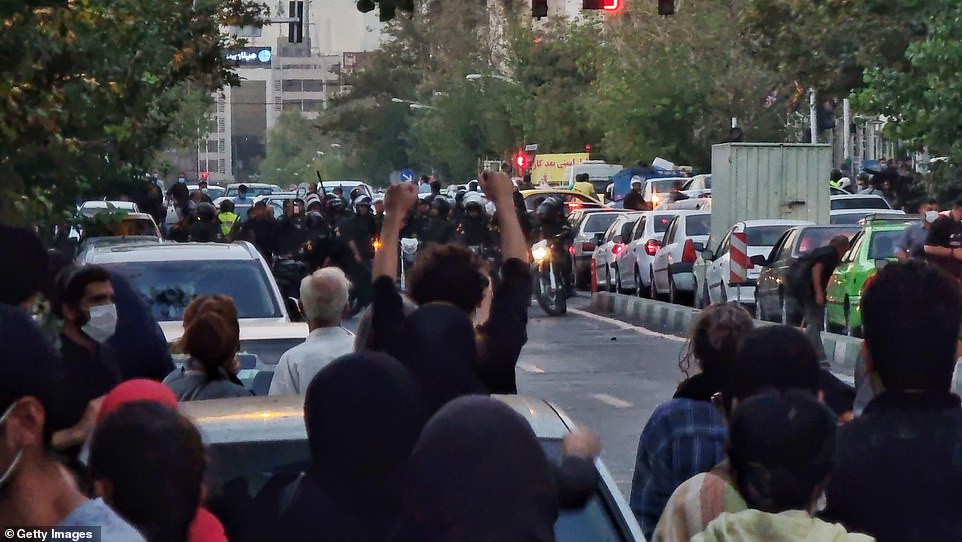 People have been clashing with police as they gather in the streets to voice their anger over the death of Mahsa Amini, 22, who died after allegedly being beaten by state morality police 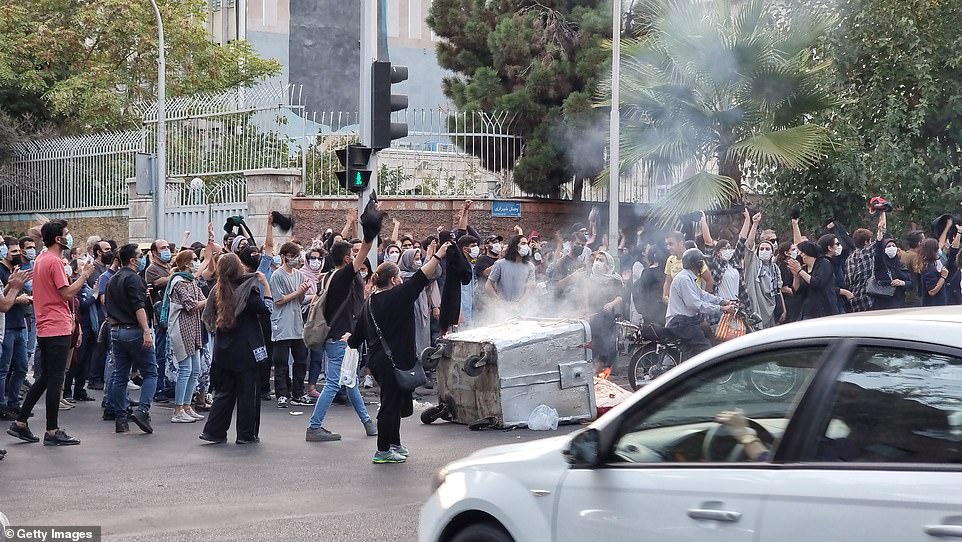 The most recent report indicates that at least 50 people have been killed during the uprising, with many videos on social media appearing to show security forces firing at protesters 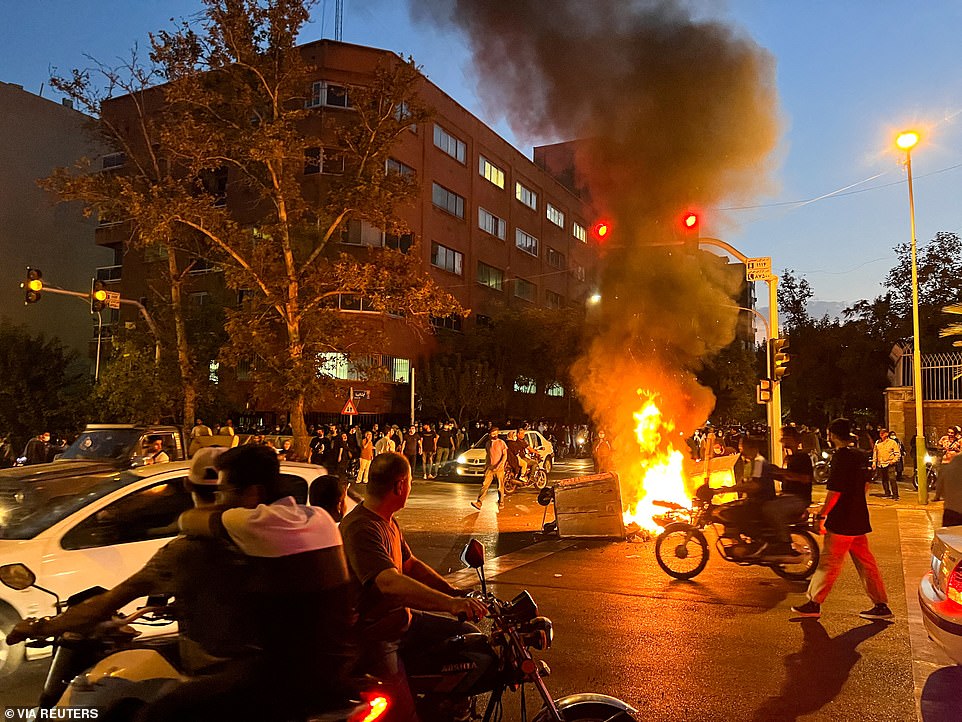 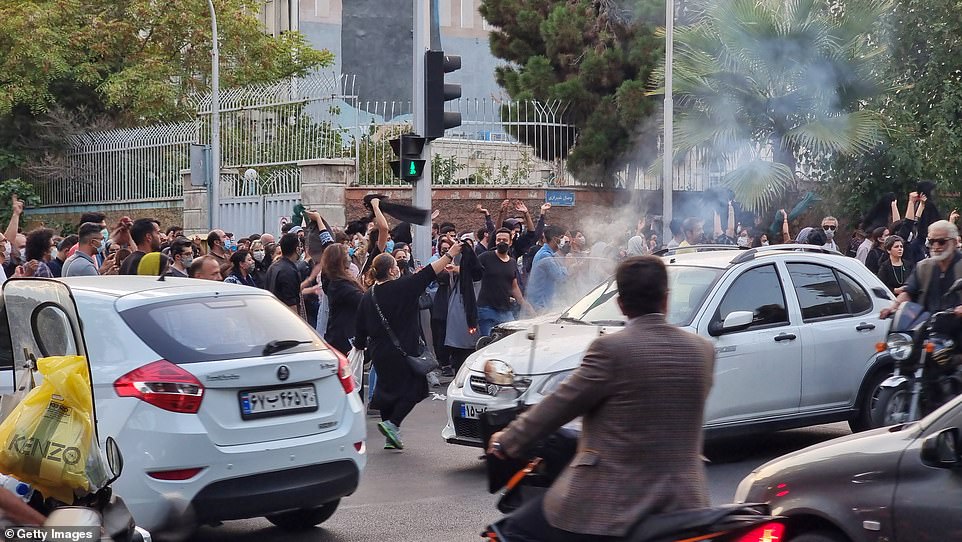 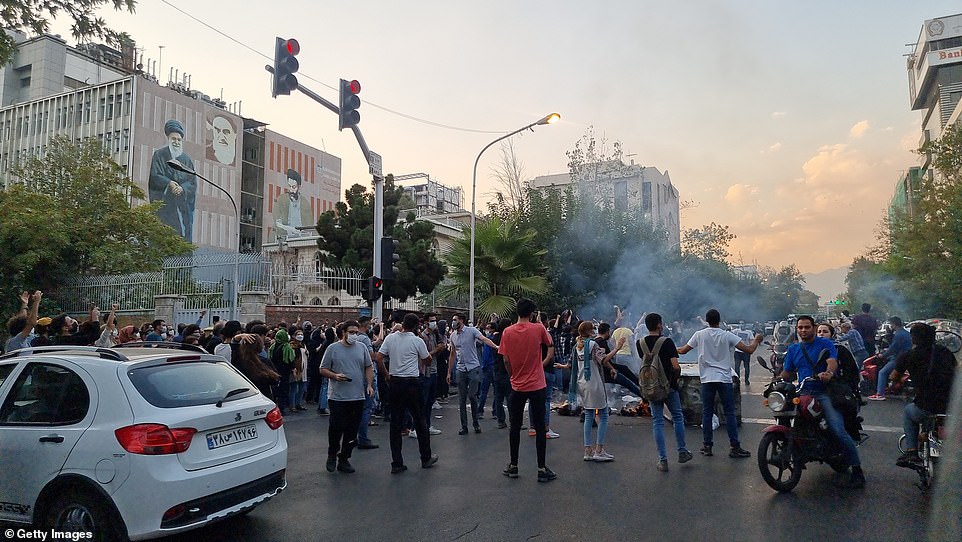 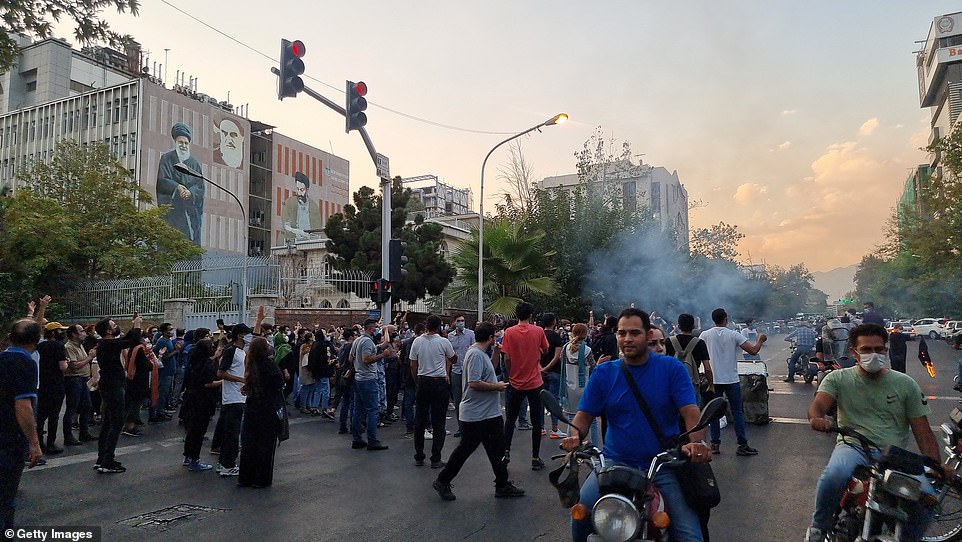 The police say she died of a heart attack and was not mistreated, but her family has cast doubt on that account 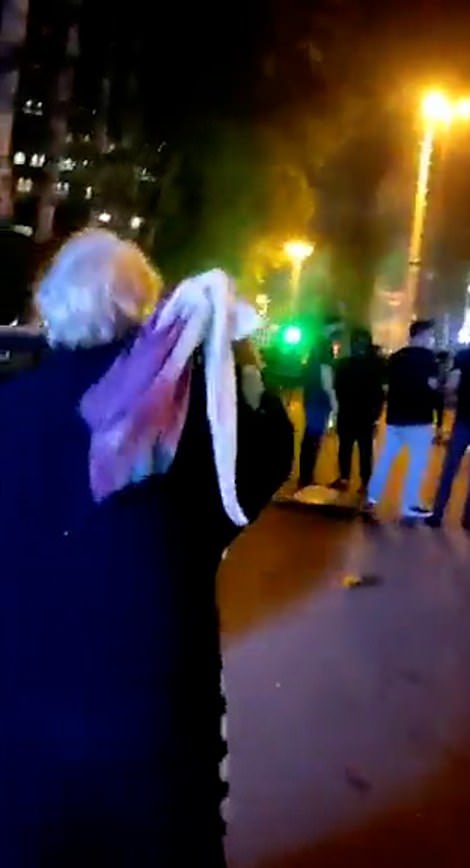 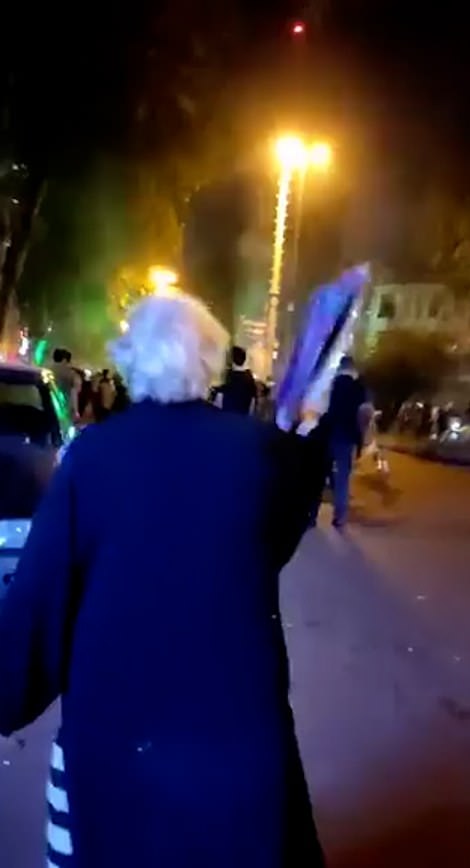 The army warned on Friday that it would ‘confront the enemies’ to ensure security and peace in the country said ‘these desperate actions are part of the evil strategy of the enemy to weaken the Islamic regime’.

Cities within Iran have been likened to a ‘warzone’ since the protests kicked off, with tires burning, petrol bombs being launched and cars being destroyed. There have even been claims that some cities, such as Oshnavieh, Sanandaj and Rudsar have been partially or totally occupied by protesters.

Babol, Amol and Rezvan Shahr which are all situated in the north of Iran, have the most reported killings by security forces, according to Iran Human Rights (IHRNGO).

The group report, via an informed source, that ‘at least six people were killed as a result of direct bullet fired by security forces on Thursday night,’ including a father of two.

Iran Human Rights (IHRNGO) Director Mahmood Amiry-Moghaddam said Thursday: ‘The Iranian people have come to the streets for their fundamental rights and human dignity, taken away by Islamic Republic leaders for more than four decades. Their peaceful protests are met with bullets from the authorities.’

Huge crowds marched through Tehran last night chanting and beeping horns, the eighth night of protests. A resident of the capital told MailOnline: ‘It was like a war zone in several parts of the city last night. People were throwing stones at the police and police was firing rubber bullets and tear gas directly at people, I heard gunshots too but I guess they just fired into air.

‘Last night the crowd started to gather at around 7pm and the clashes continued after mid night,’ he added.

‘It was more chaotic last night than previous nights and I heard more gunshots. People burned a tyre in the middle of the road.

The internet is filled with videos of riots and protests across the city, despite a government shut down of local internet services.

In one video from Tehran, amid a cacophony of gunfire, a voice can be heard saying: ‘They are shooting at people! Oh my God they’re killing people!’

Another resident of the capital told MailOnline that he had seen armed men with no uniforms on roofs of people’s houses in a neighbourhood in Tehran.

‘I noticed them last night. I have not seen them shooting but they were just checking who goes where. Probably to come and arrest them later,’ he said.

‘Local people are closing their shops early these days,’ he added. 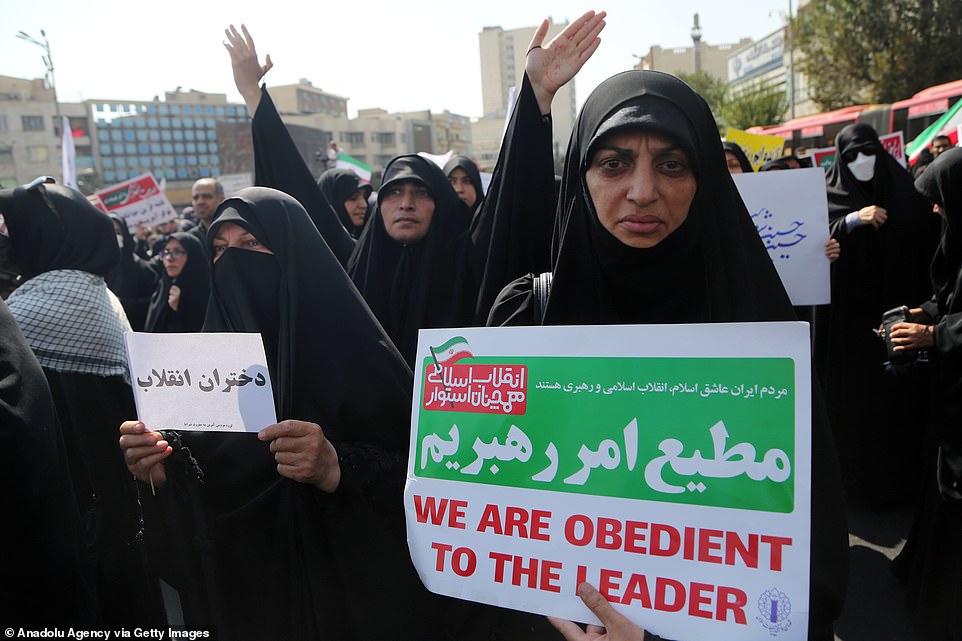 The Iranian government organised counter protests on Friday, where hijab-wearing women carried signs reading: ‘We are obedient to the leader’ 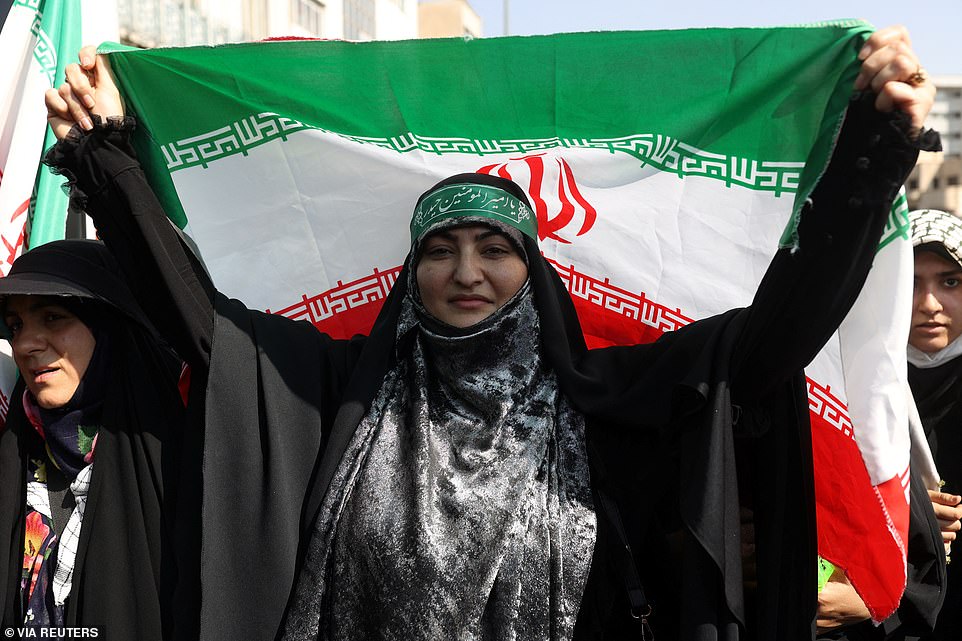 An Iranian pro-government woman holds the Iranian flag during a rally against the recent protest gatherings in Iran, after the Friday prayer ceremony in Tehran, Iran September 23 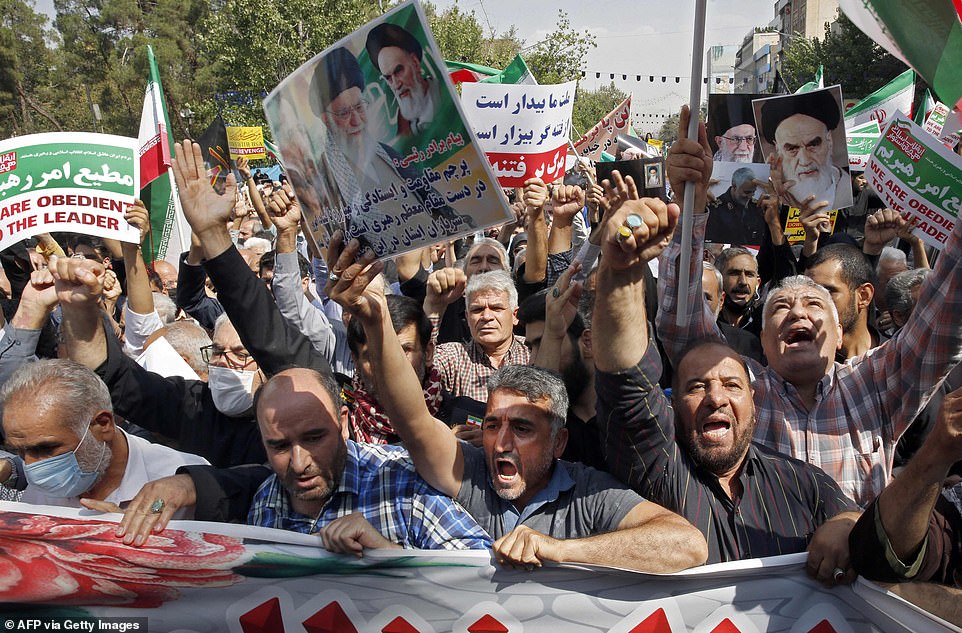 Thousands of people marched through Iran’s capital during a pro-hijab rally Friday, paying tribute to security forces who have moved to quell a week of protests by what media called ‘conspirators’ 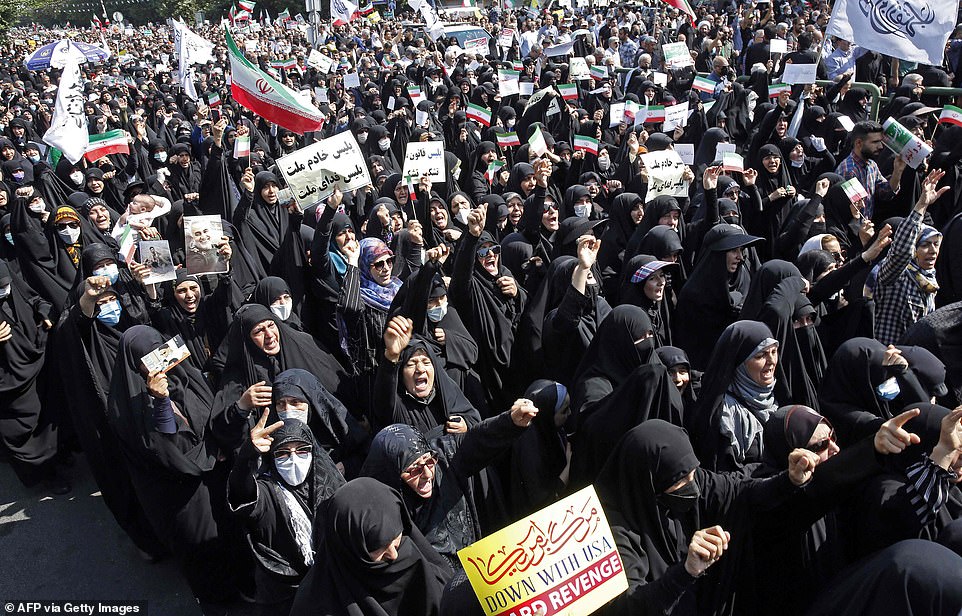 Iranian women march in their hijabs and abayas during a pro-hijab rally in the capital Tehran on September 23, 2022 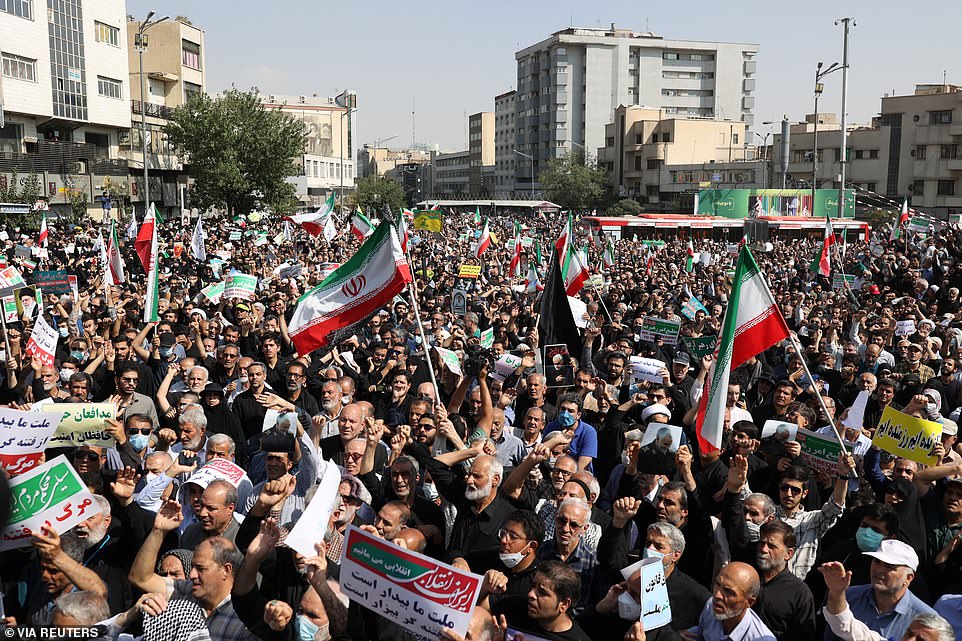 On Friday, state-organised rallies took place in several Iranian cities to counter the anti-government protests, with marchers calling for the execution of rioters, and the army threatened violence against the protestors 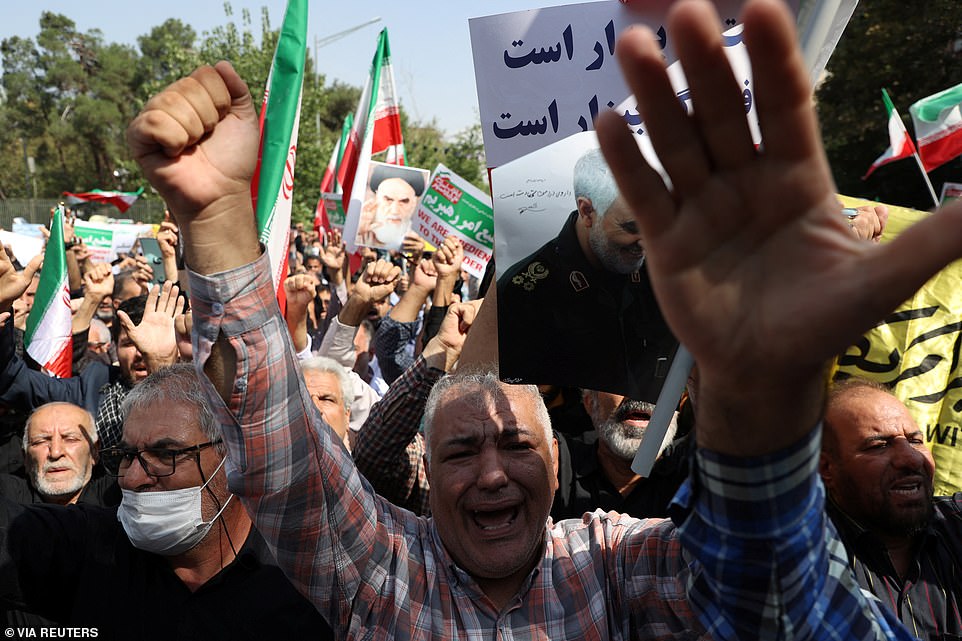 Even in Qom in central Iran, known as the country’s religious powerhouse, protestors have stormed the streets armed with Molotov cocktails.

Meanwhile, the authorities shut off access to popular social media services such as Instagram and Whatsapp and even LinkedIn, according to internet traffic monitor Netblocks.

There have also been reports that Elon Musk’s satellite internet service Starlink has been removed from the app store Google Play.

The death of Mahsa Amini has reignited anger over issues including restrictions on personal freedoms in Iran, the strict dress codes for women, the oppressive nature of the Islamic theocracy and an economy reeling from sanctions.

Police claims that Amini had a heart attack have been dismissed as yet more lies from the authorities after an eyewitness claimed to have seen Amini beaten in a custody van before falling into a coma. Her distraught family are fighting for the truth as they say she had no underlying health issues and saw bruises on her body.

Furious women in the country have been seen burning their hijabs and headscarves in the street, as well as filming themselves cutting their hair.

Women have played a prominent role in the protests, waving and burning their veils. Some have publicly cut their hair as furious crowds called for the fall of Supreme Leader Ayatollah Ali Khamenei.

The protests are the largest to sweep the country since demonstrations over fuel prices in 2019, when Reuters reported 1,500 people were killed in a crackdown on protesters. It was the bloodiest confrontation in the Islamic Republic’s history.

Iranian news agencies reported on Saturday that 739 protesters had been arrested in the northern province of Gilan, on the Caspian Sea.

The activist Twitter account 1500tasvir, which has 125,000 followers, said communication channels with the northwestern town of Oshnavieh had been cut off, and landlines were down.

Oshnavieh was one of several towns in northwest Iran, where most of the country’s 10 million Kurds live, that held a strike on Friday. Kurdish rights group Hengaw posted a video it said showed protesters in control of parts of the town on Friday.