Iran’s Revolutionary Guard call for arrest of ‘Asian Maradona’ footballer Ali Karimi over his support for protesters taking to the streets after woman, 22, was beaten to death for not wearing her hijab properly

Karimi has posted a series of anti-government slogans and advice for those trying to circumvent the government’s web censorship to his more than 11 million Instagram followers. 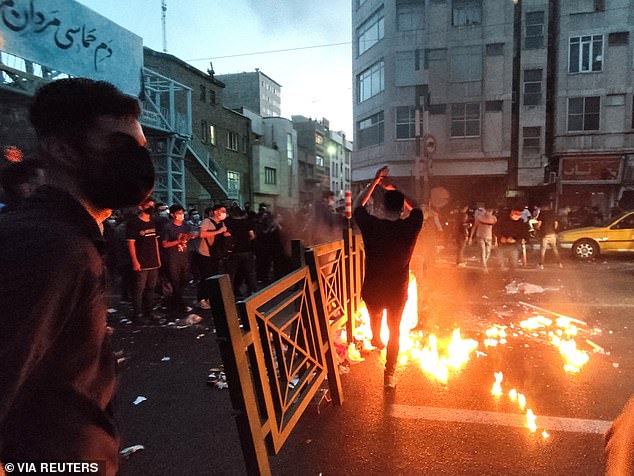 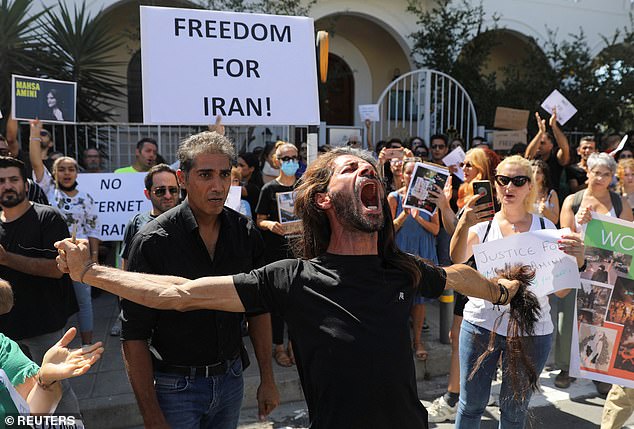 An impassioned protestor cuts his hair outside the Iranian Embassy in Nicosia, Cyprus today 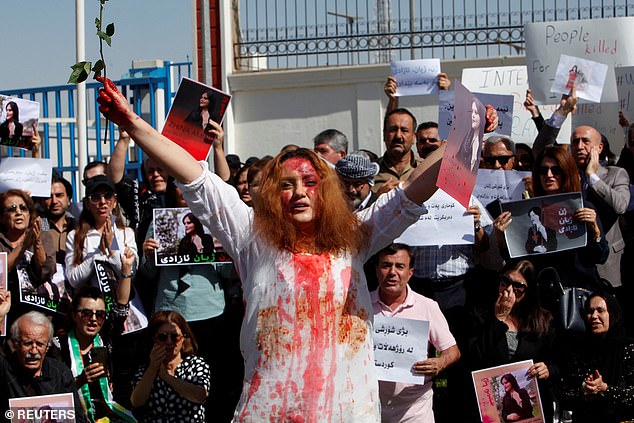 Demonstrators pour fake blood on themselves outside a UN outpost in Erbil, Iran yesterday

Ex-national team captain Karimi, 43, made 127 caps in a glittering 18-year career that also saw ‘The Magician’ win the Bundesliga with Bayern Munich.

He was named Asian Footballer of the Year in 2004. 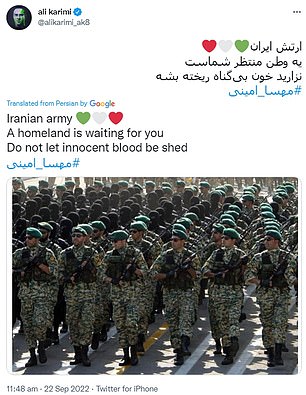 Karimi has since become an unlikely influential voice amid nationwide outcry following the death of 22-year-old Mahsa Amini in police custody last Friday.

She is thought to have been detained and severely beaten by police for ‘not wearing the veil correctly’.

Karimi addressed his nation’s army in a tweet to more than 400,000 followers on Thursday: ‘A homeland is waiting for you. Do not let innocent blood be shed.’

He also wrote of high-ranking officials on Instagram last week: ‘Their children leave [the country]; our children die.’ 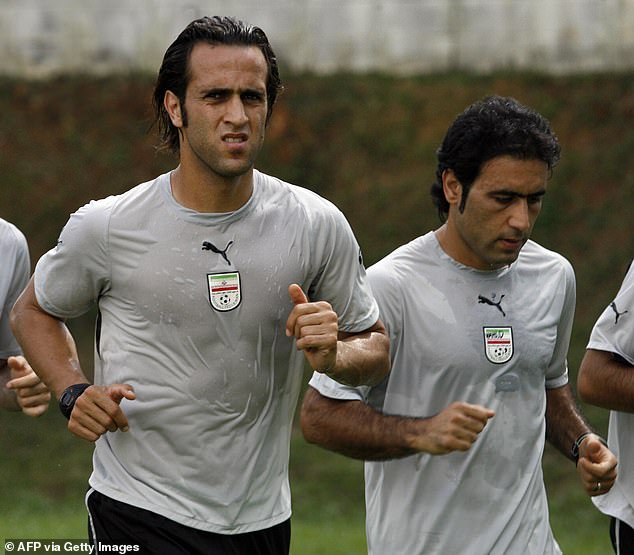 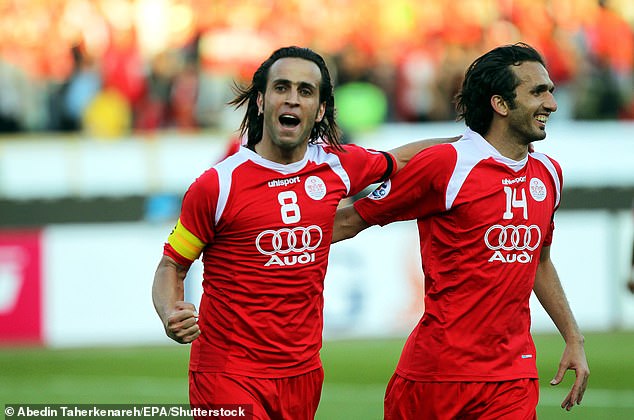 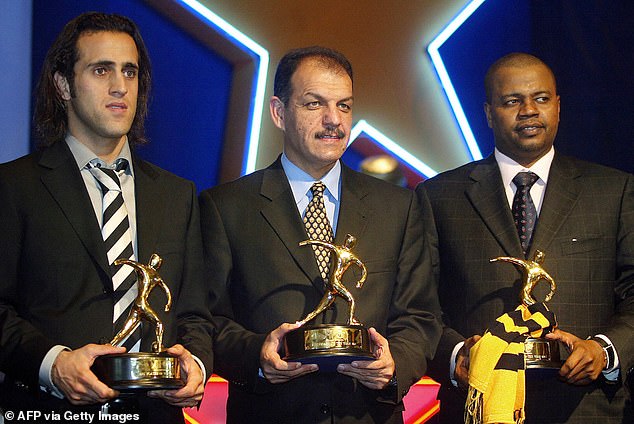 London-based Iranian football club founder Ben Charedi told The Telegraph: ‘Karimi’s massive popularity among Iran’s youths is more to do with his political views, rather than his outstanding sportsmanship.

‘He has never bowed to the regime.’

President Ebrahim Raisi said yesterday Iran must ‘deal decisively with those who oppose the country’s security and tranquility’.

Residents in Tehran have compared protest scenes to ‘a war zone’, while celebrities including Games of Thrones actress Sophie Turner, Sharon Stone and Hailey Bieber have joined in the outrage. 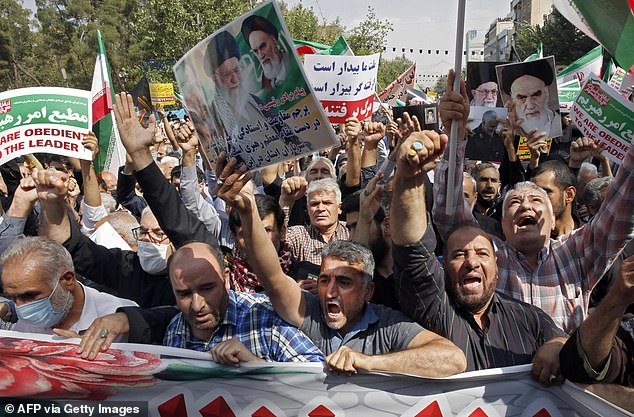 Thousands marched through Iran’s capital during a pro-hijab rally on Friday, paying tribute to security forces who have moved to quell a week of protests by supposed ‘conspirators’

Police say Mahsa had a heart attack, but an eyewitness claims she was beaten in a custody van before falling into a coma.

Her distraught family are fighting for the truth as they say she had no underlying health issues and saw bruises on her body.

Women in the country have been seen burning their hijabs and headscarves in the street, as well as filming themselves cutting their hair.

Around the world, people are also voicing their support for women’s rights, with radical feminist activist group Femen staging a semi-naked protest in front of the Iranian embassy in Madrid, Spain. 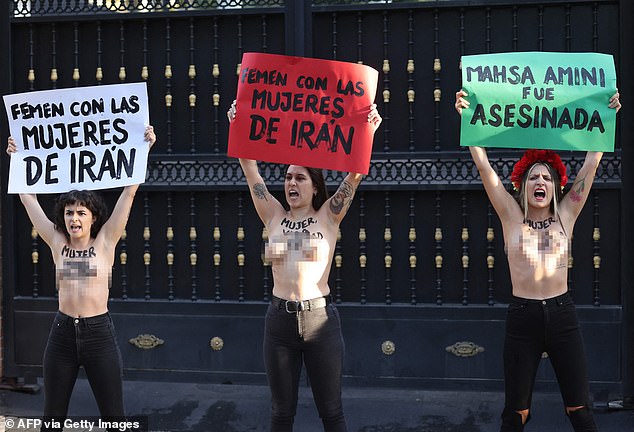 Activists Femen staging a semi-naked protest in front of the Iranian embassy in Madrid, Spain