Iraq veteran is jailed for driving into pensioner, 71, in stolen car after ‘self medicating’

An Iraq veteran has been jailed for deliberately driving into a 71-year-old pensioner when he approached he to exchange insurance details after a crash.

Jennifer Day, 39, caused around £1,000 damage to the victim’s vehicle in a car park in Cramlington, Northumberland, then left him with soft tissue injuries when she hit him with the stolen Vauxhall Polo she was driving on April 25.

Newcastle Crown Court heard the Polo had taken from the owner’s driveway earlier that day and although Day was not involved in the theft of it, she ended up behind the wheel.

When the pensioner approached her vehicle afterwards, Day, who suffers from post traumatic stress disorder as a result of her army service in Iraq, said she drove at him through ‘great fear’.

Day, of no fixed address, admitted aggravated vehicle taking, dangerous driving, assault, driving while disqualified and having no licence or insurance.

Judge Tim Gittins sentenced her to ten months behind bars with a three year and one month road ban.

Iraq veteran Jennifer Day, 39, pictured, has been jailed for deliberately driving into a 71-year-old pensioner when he approached he to exchange insurance details after a crash in Cramlington, Northumberland in April 25

The judge said Day has difficulties coping as a result of her experiences while serving the country and her struggles are confirmed by medics who prepared reports on her.

But the judge said a large inheritance meant Day, who has nine convictions on her record, was able to ‘self medicate to the extreme’ and has led to her committing offences.

Judge Gittins told her: ‘On this particular occasion you came into possession of a Vauxhall Polo, a vehicle you should not have been diving because you were disqualified.

‘When you collided with the complainant’s car in the car park you caused something in the order of £1,000 damage.

‘When he approached to engage you for your insurance details your anger and symptoms kicked in and it would seem you deliberately drove at him.’

Judge Gittins said it was ‘fortunate’ the victim’s injuries were limited to soft tissue damage but said he accepted the attack was linked to Day’s mental health difficulties. 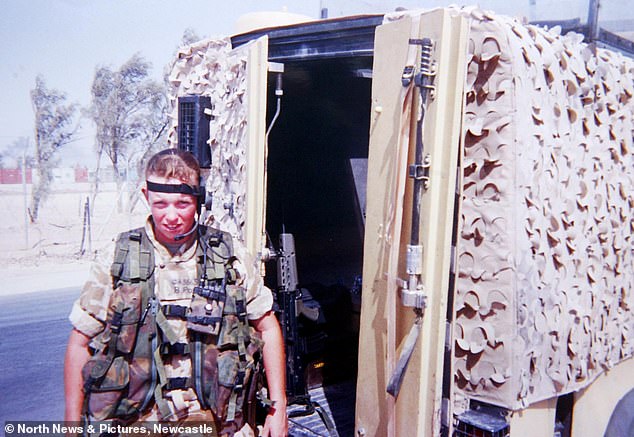 Day, of no fixed address, admitted aggravated vehicle taking, dangerous driving, assault, driving while disqualified and having no licence or insurance. Judge Tim Gittins sentenced Day (pictured) to ten months behind bars with a three year and one month road ban

Penny Hall, defending, said in 2012, after leaving the armed forces, Day undertook training to become a showjumping coach and had been trying to improve her life.

Miss Hall said Day has been ‘struggling’ with her mental health but hopes to rebuild her life, with assistance, after her release.

Day, who served with the Royal Engineers, was thrown through the windscreen of the vehicle she was travelling in when a roadside bomb exploded close to her in Basra in 2004.

She was left with post traumatic stress disorder, suffered severe headaches and was unable to hold down a job after her ordeal.

She said in an interview in 2012, when she spoke about her hopes for a showjumping coaching career: ‘My narrow escape in Iraq was just one of several close shaves as I also lived under the daily threat of suicide bombers and non-stop gunfire.

‘Rewards were also being offered by the local militia of up to $270 for the capture of any female soldier.’

After leaving the army, she found an office job but was diagnosed with post-traumatic stress disorder after three years and was forced to give up her post in 2008 due to ill health.

She said: ‘After I came back from Iraq, things were never the same.

‘I did initially find a job in Newcastle, but due to my diagnosis, I found myself and my life going downhill, which ended with me having to leave my job.’