The shocking moment an irate Australian driver repeatedly rammed his car into a roadside speed camera has been captured on dashcam footage.

Dramatic vision showed the battered grey vehicle slam into the mobile speed camera at least three times – sending a thick exhaust haze into the air as they revved their engine.

The driver blocked traffic as they backed up between each attempt, with a line of other bemused motorists watching on during the bizarre act of road rage.

After ramming into the camera for a final time, the angry motorist sent even more exhaust fumes into the air as they pushed down on the accelerator.

‘Australians… we know how to deal with speed cameras,’ one person wrote as they shared the footage online.

Other viewers expressed their admiration for the driver for standing up to road authorities, with one calling for them to be awarded Australian of the Year.

Another joked about the car’s battered appearance, and wondered whether the driver had deliberately used a run-down vehicle to take on the speed camera.

‘What a way to use demolition derby vehicles, should be more of it!,’ a third person said. 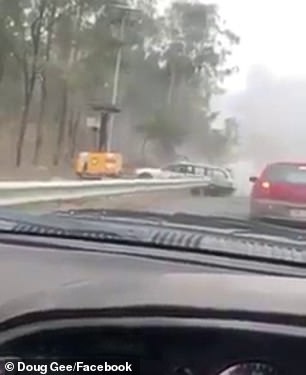