‘Why don’t you ask Southgate?’: Irate Iran boss Carlos Queiroz confronts journalist after she had quizzed striker Mehdi Taremi on the protests back in his homeland… with the former Manchester United assistant referencing UK’s role in Afghanistan

Iran manager Carlos Queiroz confronted a BBC journalist who asked about the protests in the country – and demanded to know why she didn’t ask Gareth Southgate about British policy in Afghanistan.

Queiroz was incensed that BBC Persia reporter Shaimaa Khalil asked striker Mehdi Taremi about the protests sparked by the death of young woman Mahsa Amini in the country, at a press conference before the national team’s match against Wales on Saturday.

Former Manchester United No 2 Queiroz approached Khalil after the press conference and said: ‘I’m asking you one thing now. Why don’t you ask questions to other coaches about other cultures? That’s only fair.

‘Why don’t you ask Southgate: ‘What do you think about England and the United States that left Afghanistan and all the women alone?’

A scrum of journalists gathered, as Khalil defended her right to ask these questions, before Queiroz eventually left the room.

The episode demonstrated that the protests are affecting the manager and the team, who refused to sing the national anthem before losing 6-2 to England, in an act of solidarity with the protestors. 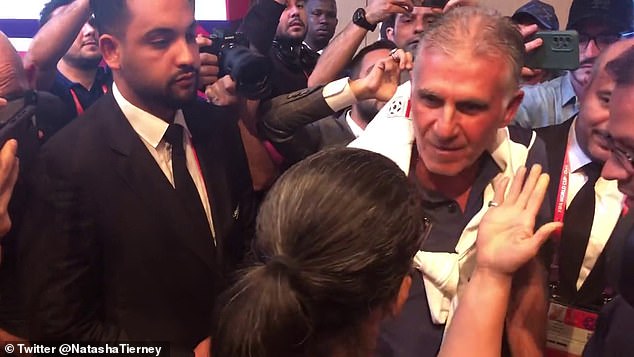 Taremi, who came under criticism after celebrating a goal in a pre-tournament warm-up game against Uruguay, had twice said he would not say more on the protests, when Khalil asked him: ‘Your fans have been here cheering for you.

‘Your fans are back home cheering for you. There are also people on the street. What’s your message for the protestors on the street back in Iran?’

He replied: ‘We are not under any pressure and the fact is we have come here to play football – not only us but all the players who are present here is Qatar. You do your work as a journalist.

‘We have all kinds of journalists here and I think in this space, when it’s a space for sport and football, sports journalists can be present here – so fans can enjoy the football. What is in the sidelines doesn’t disturb this. I can’t change it. Thousands of people like me can’t change it.’

Queiroz had spoken impressively before he lost his cool. When a journalist suggested that it was not fair that western journalists were being allowed to challenge the Iranian regime, he said: It’s not a question of being fair or not.