If you have yet to experience the stunning beauty of Ireland, it is worth moving to the top of your list of holiday destinations as it’s tipped to join the green list of countries we might travel to after May 17.

Here you’ll discover a wealth of holiday packages on offer – and better still, you can reach Ireland by ferry or fly there in about 90 minutes.

Take to the road to explore the scenic 1,500 miles of Ireland’s Wild Atlantic Way. Pictured is part of the route in County Clare

The scenic 1,500 miles of Ireland’s west coast Wild Atlantic Way makes a fantastic self-drive holiday, packaged with good accommodation and excursions on one of Kuoni’s first forays into holidays in Ireland.

Take your own car on the ferry and drive from County Cork to Clare, staying in guest houses and hotels along the way.

Included are a four-hour food tour around the fishing village of Kinsale, an hour’s seaweed forage in Kerry, and a guided walking tour of the karst landscape of The Burren.

Eight days, with B&B and tours, costs from £1,250pp from May to September (kuoni.co.uk). Ferry crossings are extra.

A warm bubble in the dark forest

Star-gaze from your four-poster in a giant bubble dome in Finn Lough Resort in Fermanagh, near the border with Donegal.

There’s no wi-fi or television to distract, but there is a power shower, underfloor heating and a vintage record player, as well as a telescope to spot the constellations.

During the day, visit the forest spa on the lough shore, including a floating cabin, open-air hot tub and traditional Finnish sauna with safe access into Lough Erne. The resort is also home to cottages, lodges and a restaurant.

The trip to float your boat 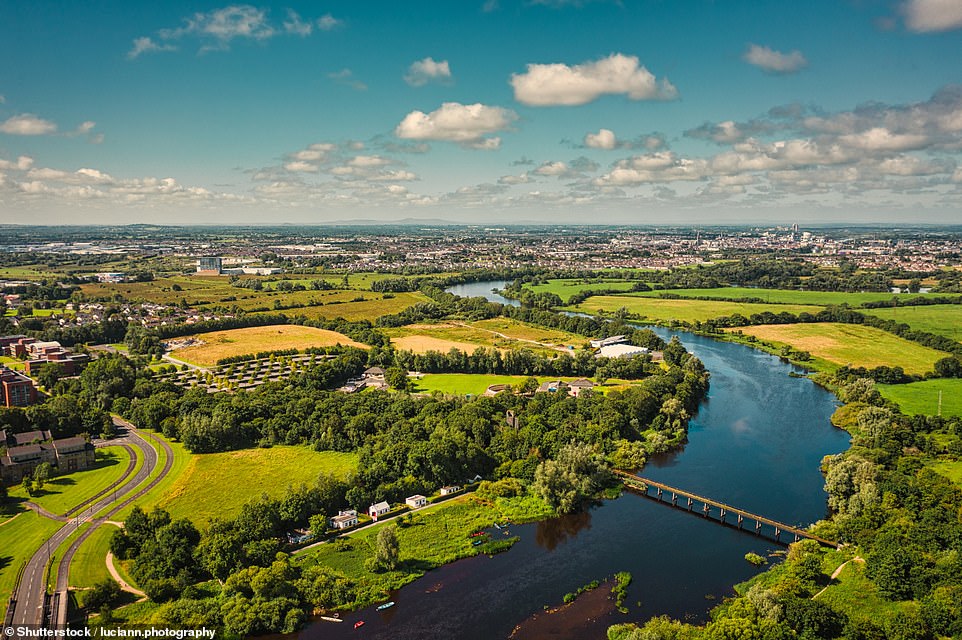 An aerial view of the Shannon River. It is surrounded by lakes and quaint villages with medieval churches

Putter along the Shannon River and its surrounding lakes, stopping off in quaint villages with medieval churches, visiting golf courses and even doing a spot of fishing.

There’s no need for any boating experience to take to the water with one of Le Boat’s nicely done-out vessels, sleeping four to 12. The season lasts until November 1.

A week in October costs from £1,939 for nine people (leboat.co.uk). The base at Portumna in Galway is less than three hours from the ferry port in Rosslare.

Snap up a photography break 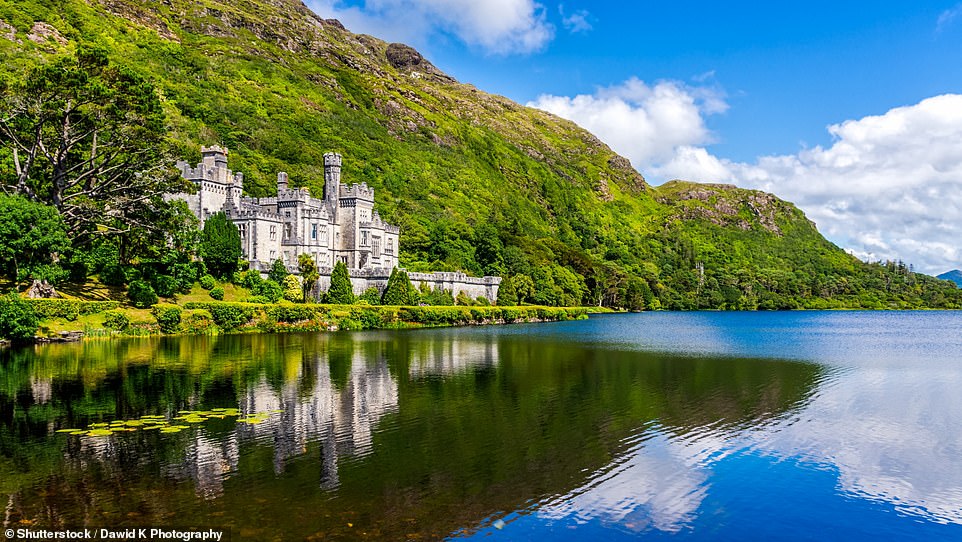 You can visit Connemara on an 11-day tour with photographer Paul Harris. Pictured is Connemara’s Kylemore Abbey

The culture and ancient landscape of Connemara has long attracted writers and artists and is now starting to lure photographers.

Visit it along with Galway and County Mayo on an 11-day tour with photographer Paul Harris, taking in the coastal landscapes as well as a visit to Ballinasloe Horse Fair in Galway and Inishbofin island. This year’s tour is fully booked, but you can bag an early place for 2022.

Eleven days’ full-board, with meals and transfers but not flights to Knock, costs from £2,850pp, departing September 29 2022. No single supplement (responsibletravel.com). 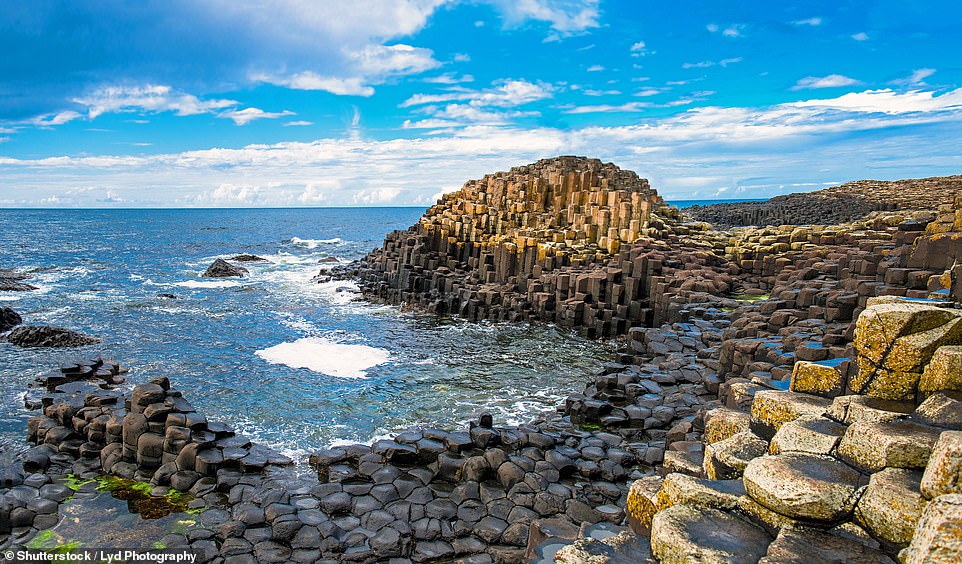 Backing on to the sandy beach of Ballycastle in County Antrim is the Marine Hotel, which can book guests in for surfing lessons in Portrush, an hour’s drive along the coast.

A week for a family of five with continental breakfast starts at £1,120 in August (marinehotelballycastle.com). Three days of surf tuition (two hours a day) is £140pp, plus equipment rental. 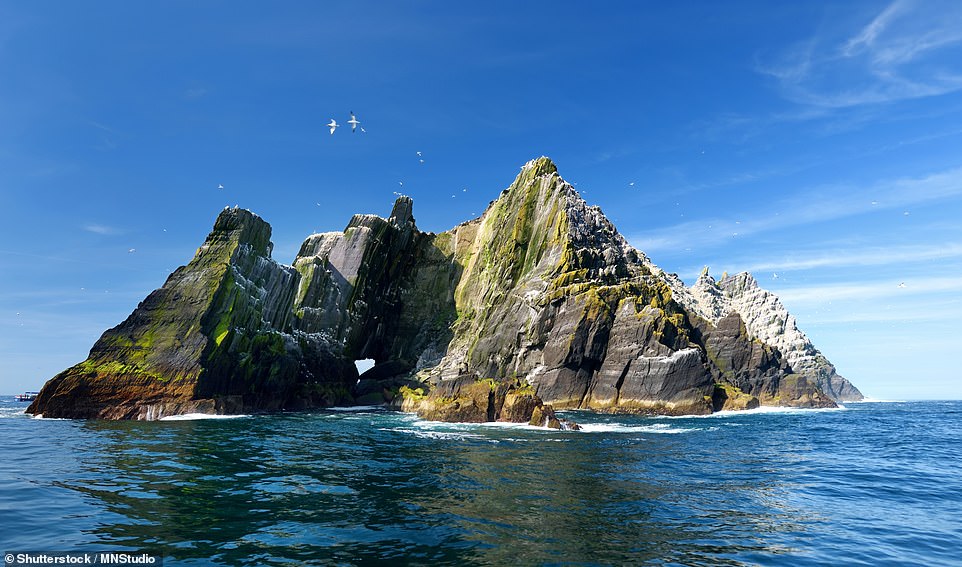 On a self-guided cycle tour of south-west Ireland’s Ring of Kerry, you can see the Skellig Islands, pictured, of Star Wars fame

South-west Ireland’s Ring of Kerry incorporates mountains, loughs and rivers as well as scenic beaches and bays. See them all on this stunning self-guided cycle tour taking in the Skellig Islands, of Star Wars fame, as well as castles and the glaciated valley known as the Gap of Dunloe.

The route covers up to 34 miles a day and luggage is transferred between B&Bs and one historic hotel.

Book your own castle 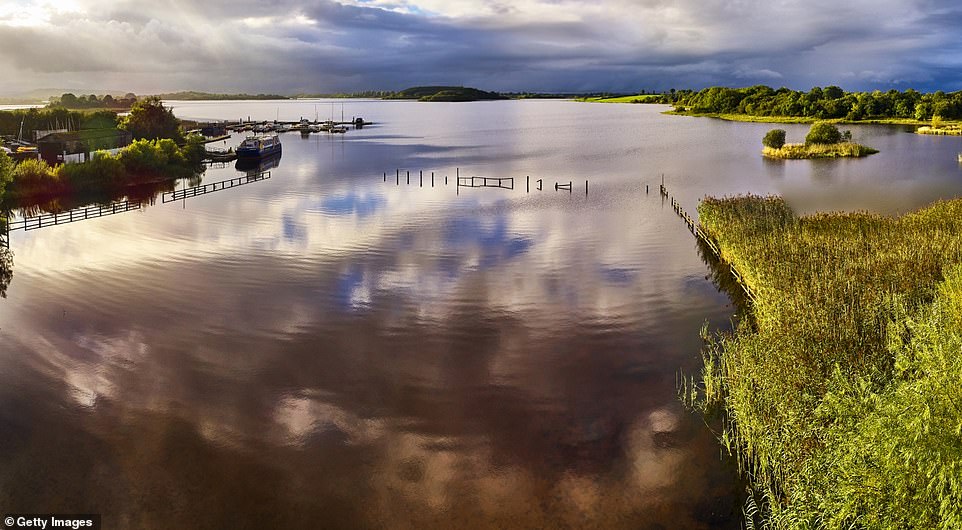 The waters of Lough Erne, pictured, are rich in pike, bream and trout, among other species

Spread over eight islands, the 400-acre Belle Isle Estate is surrounded by the waters of Lough Erne, which are rich in pike, bream and trout, among other species. It’s perfect for an angling break that mixes game and coarse fishing, with boats, equipment and guides available to hire.

You’ll find plenty of walks on the estate, as well as clay pigeon shooting and archery. There are cottages and apartments, or you can stay in the 17th Century Belle Isle Castle, but you’ll need to book all 13 rooms, which makes for a brilliant family get-together.

Road trip for the foodie fanatic 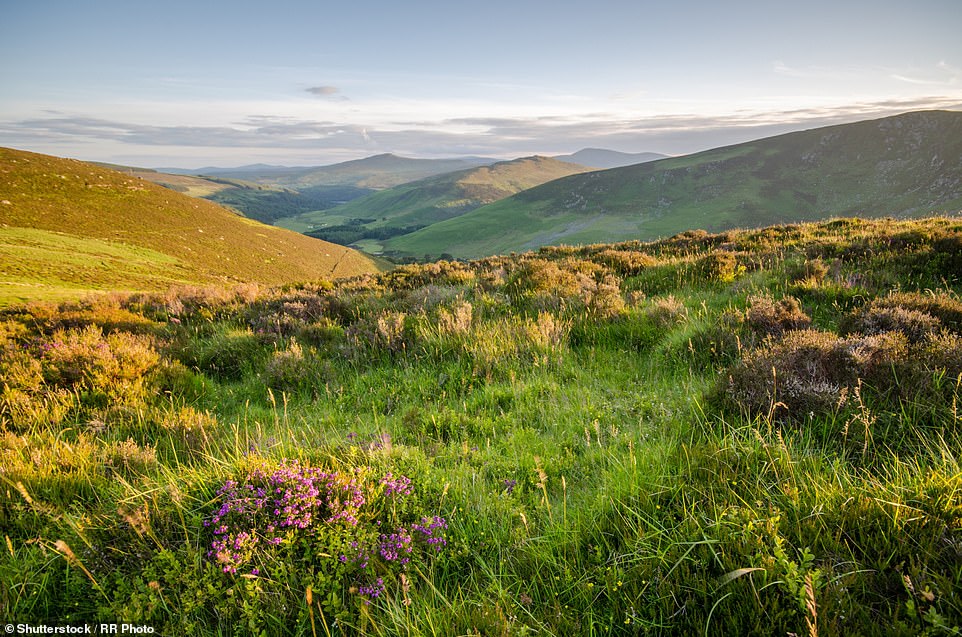 The beautiful Wicklow Mountains National Park. You can explore the area while staying at The Cliff at Lyons in Kildare

Explore the coast from Dublin to Ardmore in Waterford at your own pace on this relaxed road trip taking in three fantastic foodie hotels. The Cliff at Lyons in Kildare, with a two-Michelin-star restaurant, makes a great base to explore the Wicklow Mountains National Park.

Then it’s an easy drive down the coast with its glacial valleys, mountain passes and dramatic vistas to the sleepy fishing village of Ardmore Bay. Here, the Cliff House Hotel has 39 sea-facing rooms as well as a spa, water activities and a Michelin-star restaurant. Return to Dublin’s restaurant with rooms, the Cliff Townhouse.

Rooms from €249 at the Cliff at Lyons and Cliff House Hotel, and €205 at Cliff Townhouse (cliffhousehotel.ie).

Your door into Narnia 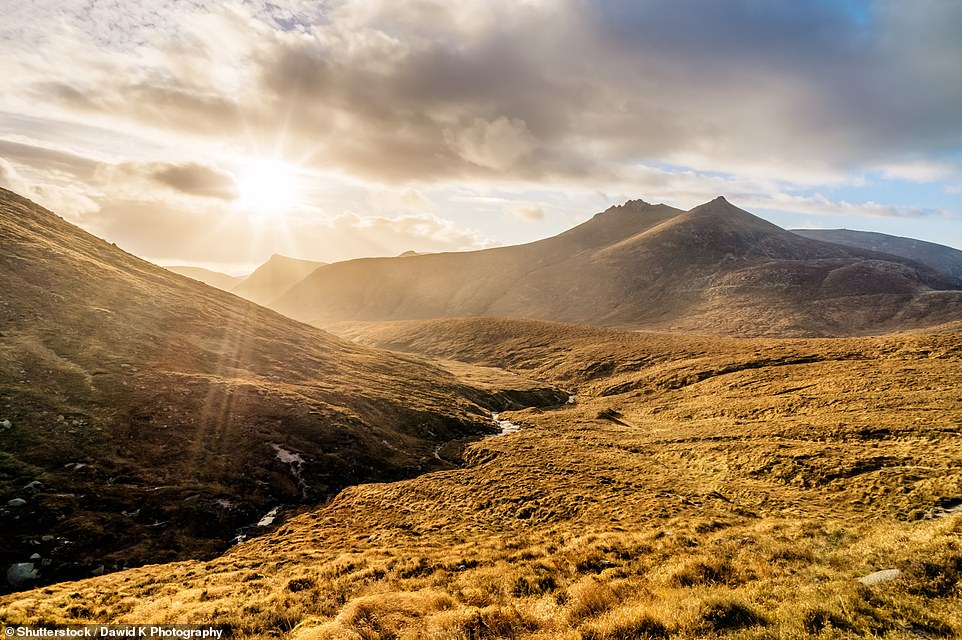 Northern Ireland’s Mourne Mountains, which are an hour from Belfast and became entrenched in author C.S. Lewis’s imagination as Narnia

It’s easy to see how the conifer-clad mounds and craggy, tor-topped peaks of the Mourne Mountains became entrenched in C. S. Lewis’s imagination as Narnia.

Just an hour from Belfast, you can make frequent forays into the magical land by opening the door of one of five whitewashed cottages, done out in rustic-chic style. 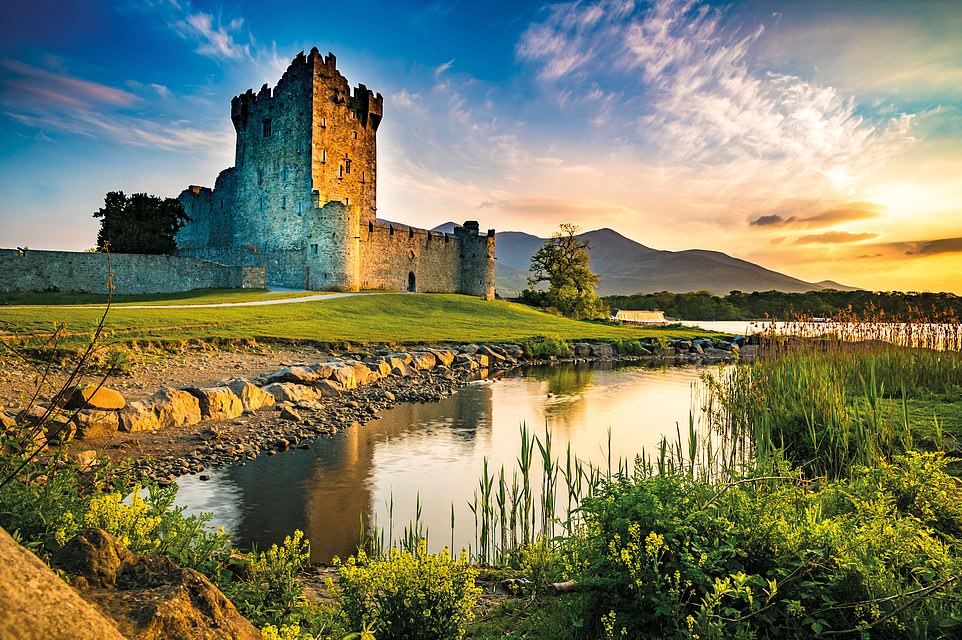 On a guided trip of three national parks – the Wicklow Mountains, Connemara and Killarney – you can explore Ross Castle in Kerry, pictured

There are hidden glens to explore, as well as Glendalough monastery, Ross Castle in Kerry and cosy pubs to kick back in at the end of the day. Walks are between three and ten miles.

Six nights’ B&B from September 18 costs from €1,695pp with daily lunches, two dinners, transfers and the services of a guide. Transport to Dublin not included (wildernessireland.com). 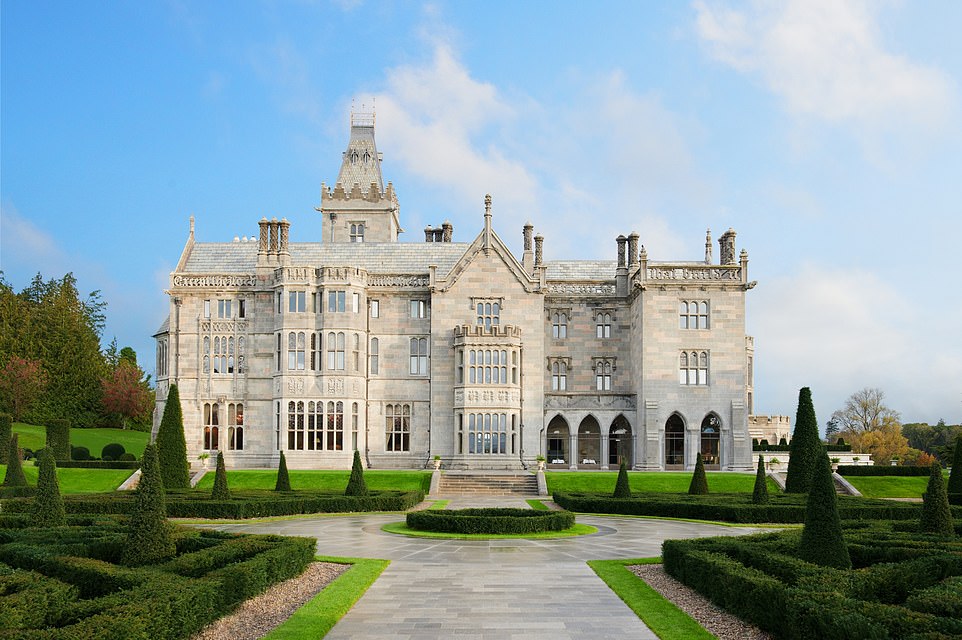 The imposing 19th-century Adare Manor in County Limerick, which will be hosting the Ryder Cup in 2026

There’s everything from cookery to clay pigeon shooting and fishing to falconry at Adare Manor in County Limerick. There’s also a spa and some golf – the manor’s course will be hosting the Ryder Cup in 2026 – plus 840 acres of parkland to explore on foot, by bike or by horse-drawn carriage.

The magnificent 19th Century manor, all gargoyles, decorative stone and wood carvings, has a Michelin-starred restaurant.

B&B doubles from €700 in summer (adaremanor.com). The nearest airport is Shannon.

Eco cabins for a clean break 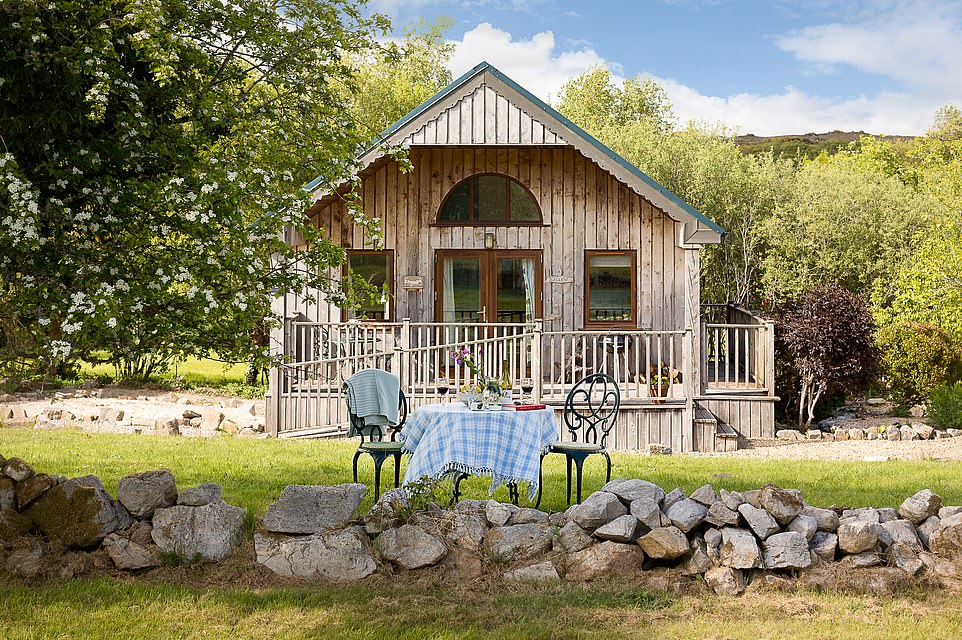 One of the three cabins at the Ard Nahoo Eco Retreat in County Leitrim. All are beautifully constructed with timber and hemp insulation

There are just three cabins at the Ard Nahoo Eco Retreat in County Leitrim, about an hour from Knock Airport. All are beautifully constructed with timber and hemp insulation and are powered by wind turbine and pellet stoves.

Relax in the hot tub or by the pond, follow walks from the door, or book one of the yoga classes on offer. Cycling, riding and kayaking are available nearby. 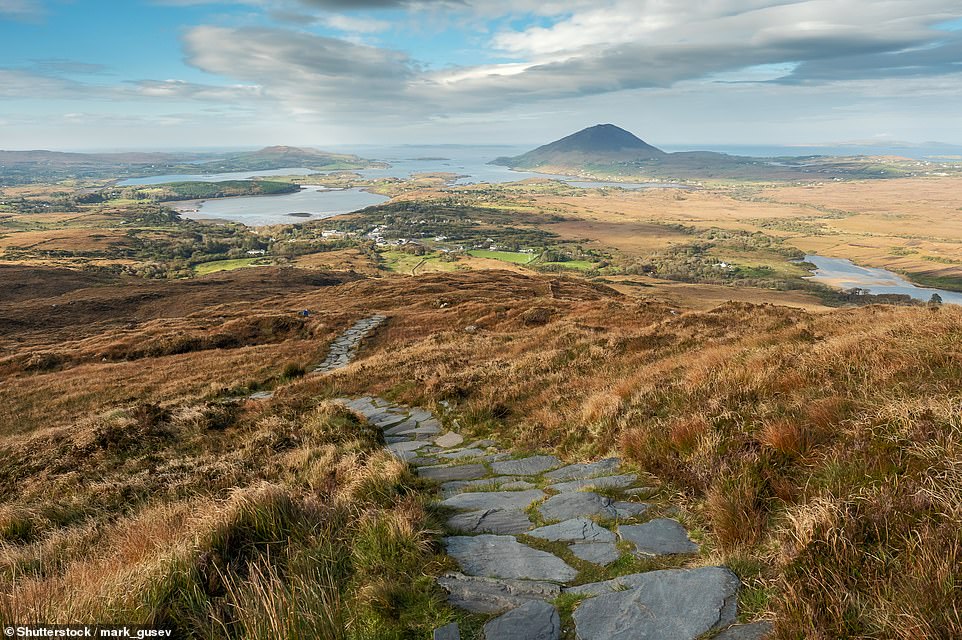 You can either hike, bike or do both on a self-guided tour of Connemara, which takes in Connemara National Park, pictured

Hike, bike or do both on this six-day self-guided tour of Connemara’s lesser-known spots.

One day you could be walking through Connemara National Park, spotting falcons, mountain goats and red deer, and the next choosing a cycling route to Leenane on Killary Harbour before relaxing in a seaweed bath. 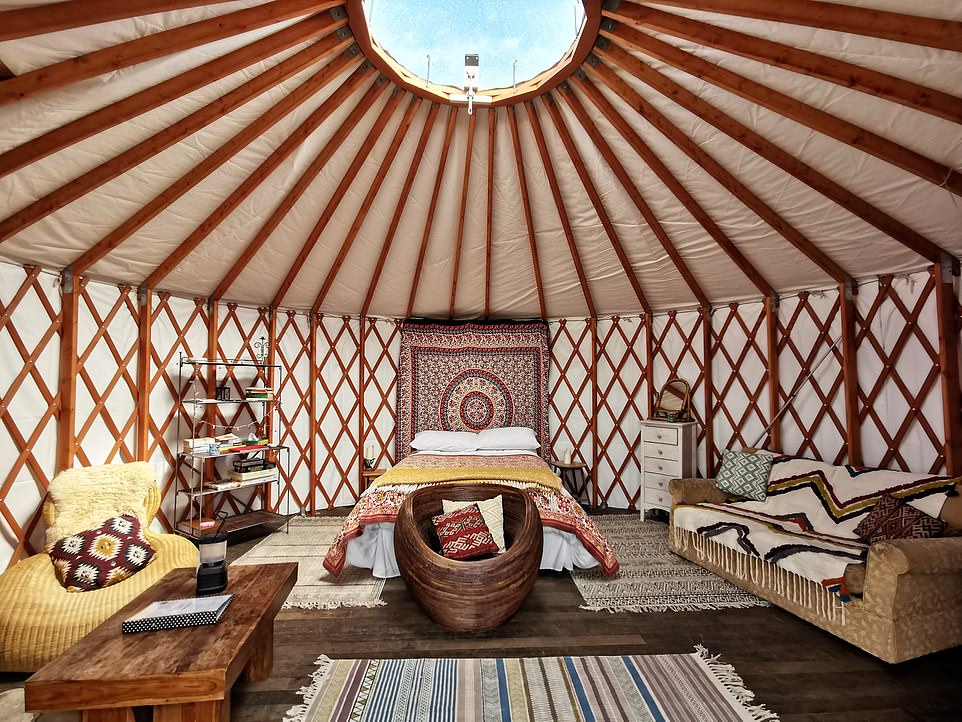 One of the yurts at Lough Mardal Lodge in County Donegal. They come with kingsize beds and a wood burner

Go back to nature and stay in one of five luxury yurts on a lakeside setting on 90 acres of private land with wildflower meadows, heather-covered hills and views of Donegal Bay.

Although the yurts at Lough Mardal Lodge don’t have electricity, there’s no roughing it as they come with super-kingsize beds and a wood burner, as well as a skylight for viewing the night sky. There’s a communal lodge with exposed beams, a kitchen and washrooms, and guests can order food packs.

Splash out on watersports 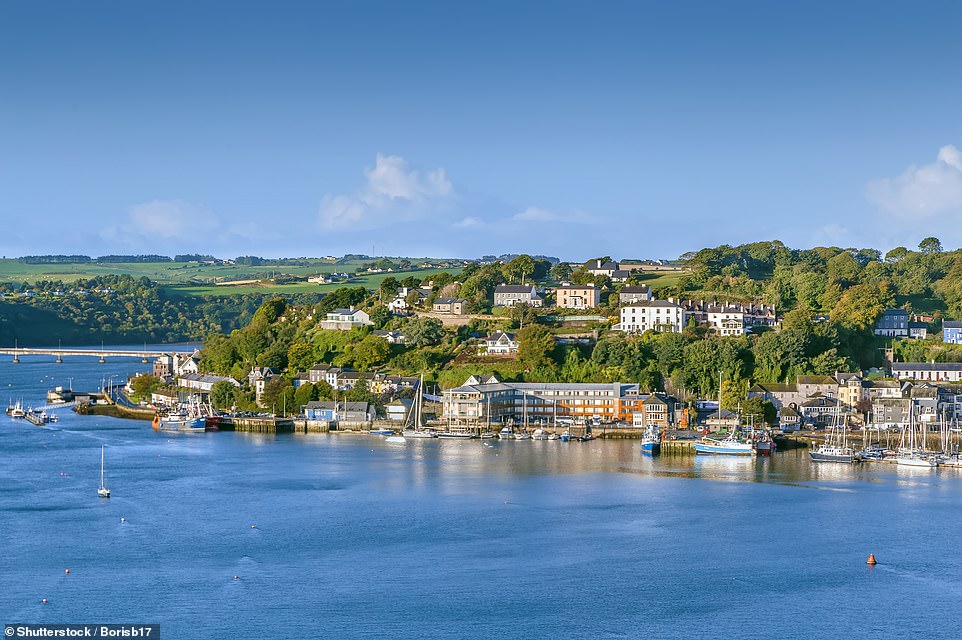 The fishing town of Kinsale, near Cork, where several firms offer kayak, windsurfing and paddle-board hire as well as yacht charters

Head out on the water at the fishing town of Kinsale, near Cork, where several firms offer kayak, windsurfing and paddle-board hire, as well as sailing tuition and yacht charter. The less adventurous can explore the boutiques, art galleries and historic buildings in Kinsale’s maze of narrow streets.

An hour’s hire of a windsurfer costs €20 (oysterhaven.com). Sovereign Sailing (sovereignsailing.com) has half-day family sailing trips from €195 or a week’s yacht charter in summer from €2,765 for seven. For a berth on dry land, try Blue Haven Kinsale, with 16 nautical-style rooms from €225 B&B in August (bluehavenkinsale.com).

Cast off with knitting pros 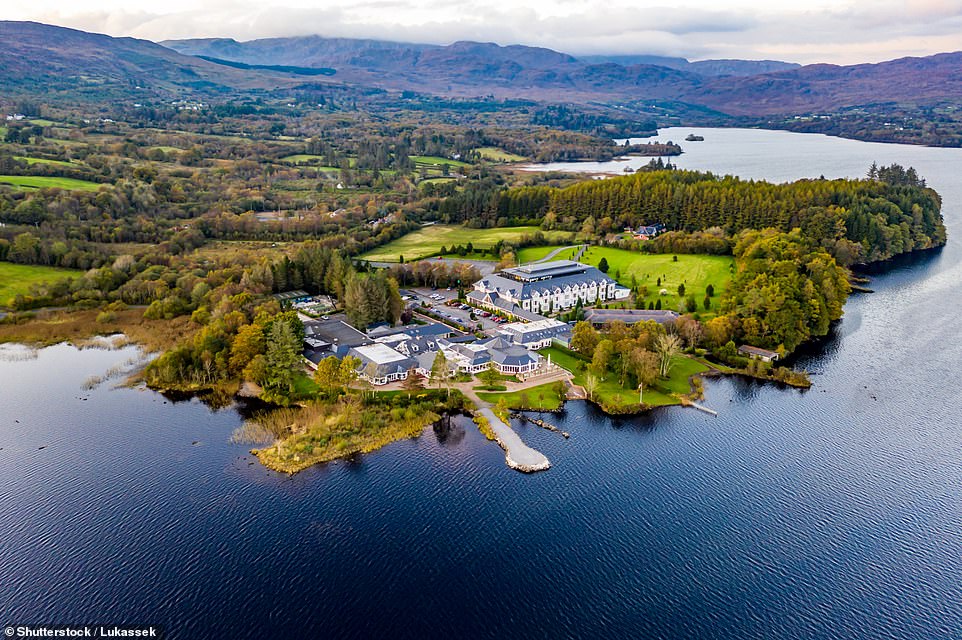 Harvey’s Point Hotel on the shores of Lough Eske, where a ‘knitting tour of Ireland’ workshop takes place

Indulge your inner knitter on this trip to northwest Ireland, with workshops led by specialists and local instructors.

It’s not all knit one, purl one: the holiday includes a visit to Carrickmacross Lace to see the fine work produced there since the early 1800s, and weaving, spinning and dyeing demonstrations.

Starting in Dublin, home to the Constant Knitter yarn shop, you will transfer to Harvey’s Point Hotel on the shores of Lough Eske for the workshop.