Dublin of decades gone by: Colour photos reveal traditional Irish life with horse-drawn carriages on the street in the 1960s and 1970s

The traditional lifestyle of Ireland in the 1950s, 1960s and 1970s is revealed in colour in this collection of nostalgic images.

In the fascinating pictures boys play on a barge on a Dublin canal, men enjoy pints of stout at a pub, and a fishing trawler returns to the shore of Fingal with fresh supplies.

The transition from traditional to modern life is also on display, with one picture showing a horse-drawn carriage parked on a Dublin street in front of a bus to the city’s expanding airport.

Other images show specific moments in Irish history, such as the bombing of Nelson’s Pillar, a monument to the English military hero which became a target for Irish republicans and was attacked in 1966.

The photographs bring back memories of a very different Ireland – a far cry from the more liberal nation it has become today.

In 2015 the country became the first in the world to legalise gay marriage based on the result of a referendum – something that would have been unthinkable 50 years ago.

Old and new: A horse-drawn carriage is parked on Store Street in Dublin as a woman carries a small child inside, in front of an Aer Lingus-branded bus taking passengers to Dublin Airport, in 1961. The airport expanded rapidly during the 1960s 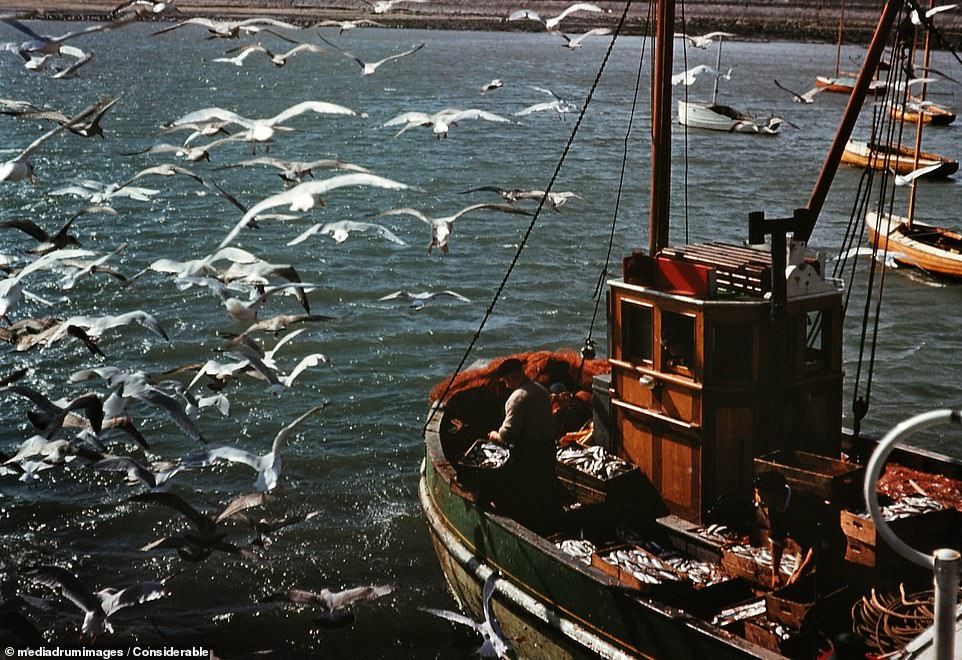 On the open water: A fishing trawler is surrounded by seagulls as it returns to shore, with fresh stocks of fish piled up on the boat. The picture was taken around 1960 in Skerries, a town in what was then County Dublin but is now part of County Fingal 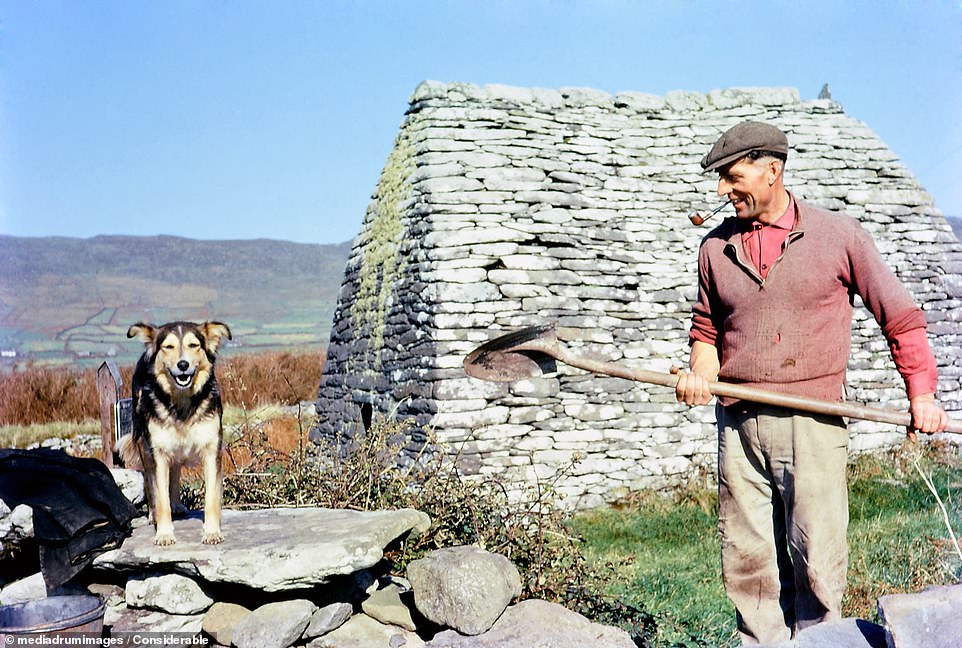 Hard at work: Seamus Johnson – wearing a flat cap and smoking a pipe – holds a spade and laughs with his dog outside the Gallarus Oratory, a stone church of uncertain origin on the Dingle Peninsula in County Kerry, in a picture taken around 1960 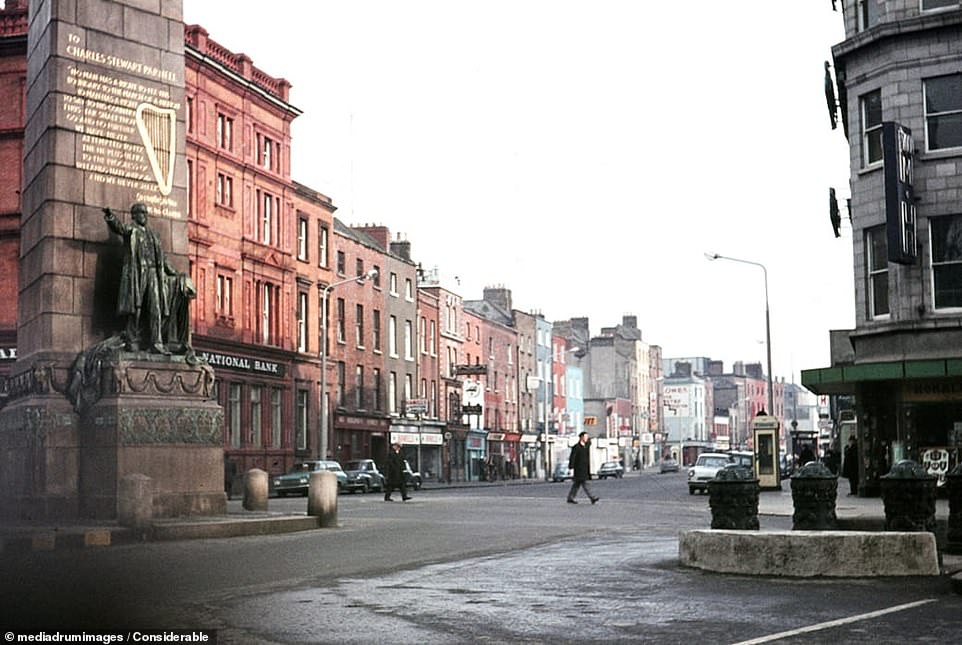 Lonely road: A view of O’Connell Street in Dublin, with few cars on the road and a statue of Charles Stewart Parnell – a leading Irish nationalist politician in the late 19th century – at the north end of the street. The monument was unveiled in 1911 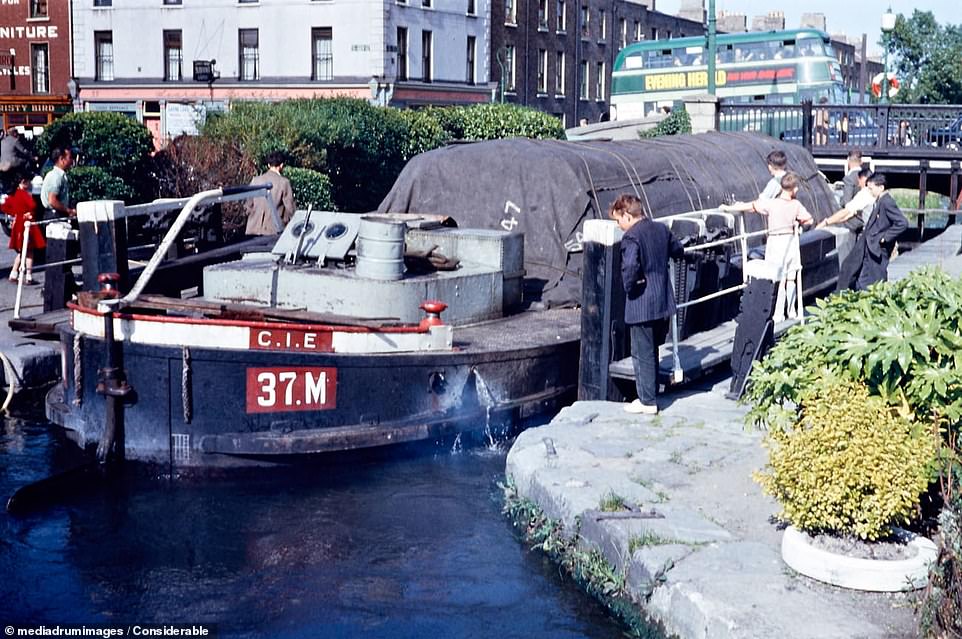 Calm on the water: Boys work at a barge at Portobello, Dublin, in 1959 with a bus in the background. The initials CIE, painted on the side of the barge, stand for Córas Iompair Éireann which runs public transport services in the Republic of Ireland 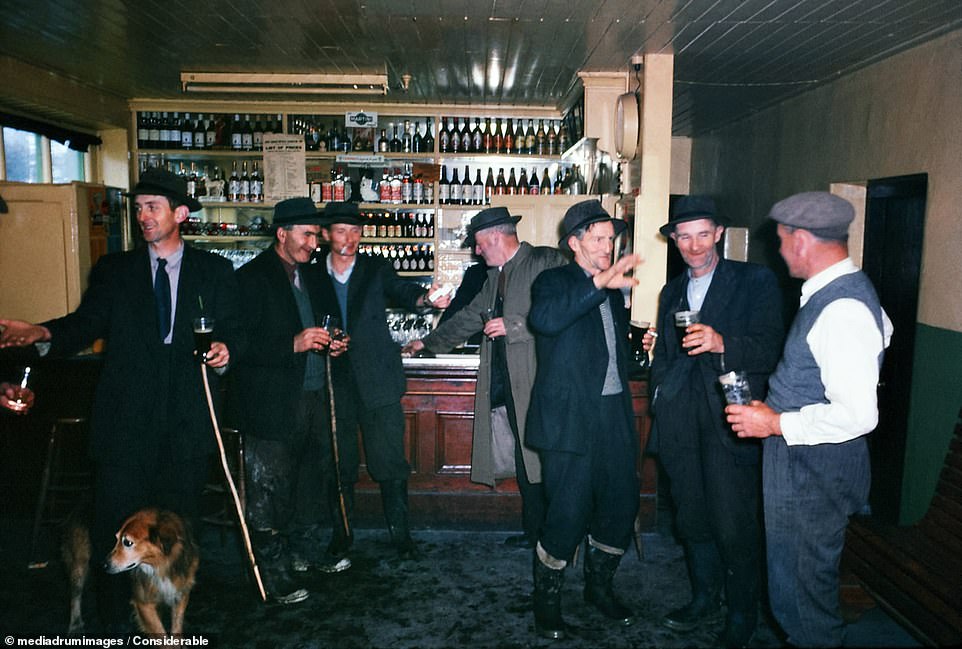 Costume clash: This picture taken around 1963 shows men dressed in work gear – many of them in matching hats and some in waistcoats – holding pints of stout at Patrick Sullivan’s pub with a well-stocked supply of drinks behind the bar 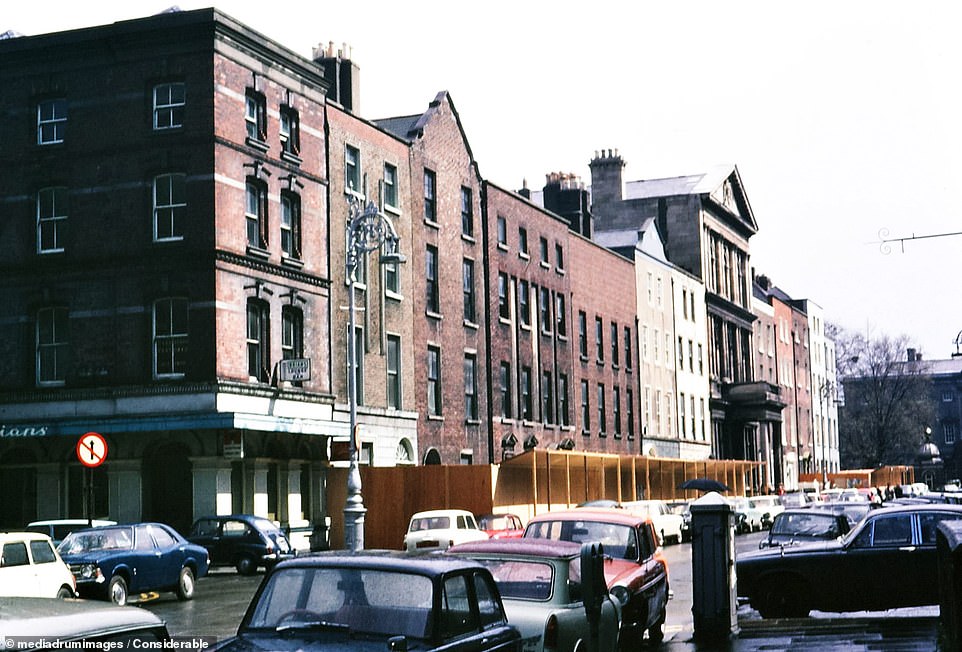 Cars and buildings on Molesworth Street in Dublin are pictured in this shot from 1972. The small road links Dublin’s Kildare Street with Dawson Street, and among the buildings on it is the library of the Grand Lodge of Freemasons in Ireland 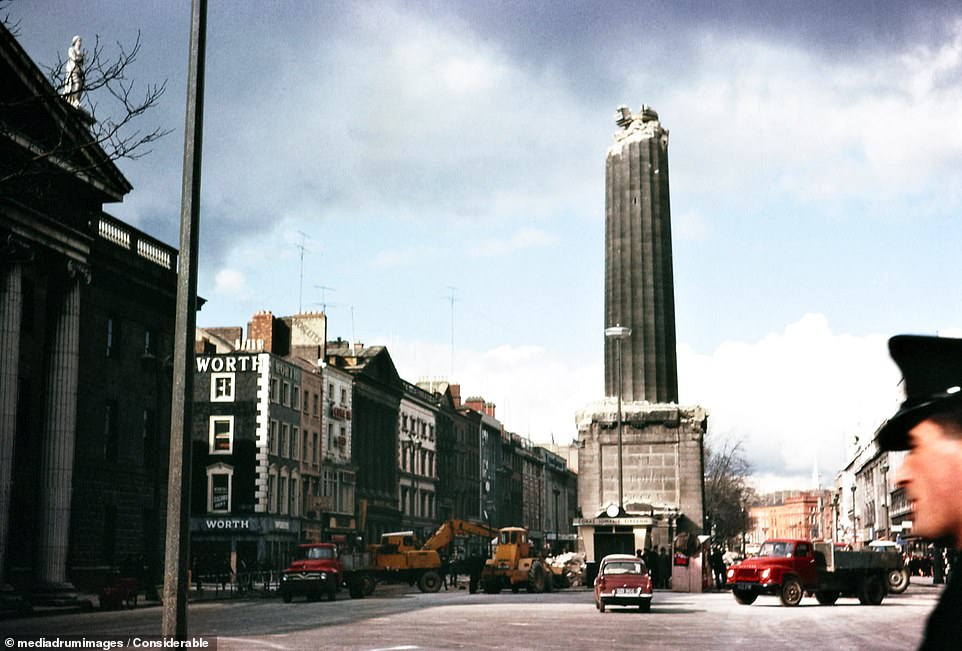 Halfway down: This picture taken on March 8, 1966, shows Nelson’s Pillar on O’Connell Street shortly after it was bombed by Irish republicans. The statue of Horatio Nelson incited anger in Ireland that an English military hero was on display there 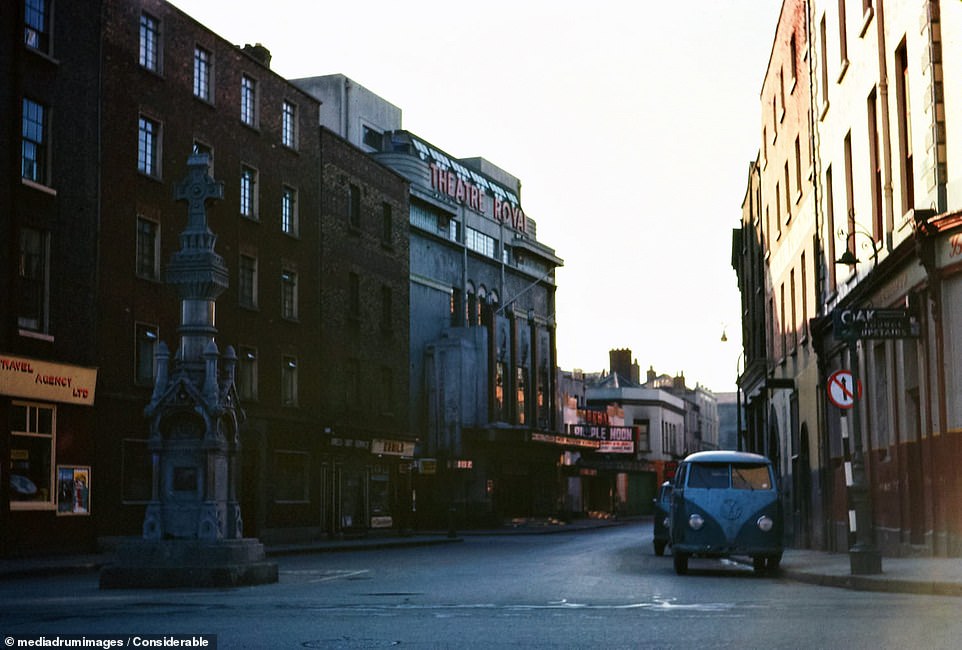 Last days: The old Theatre Royal on Hawkins Street in Dublin is pictured in April 1962, the year it closed due to lack of demand. An earlier theatre on the same spot had entertained crowds in the late 19th century but was destroyed by fire in 1880 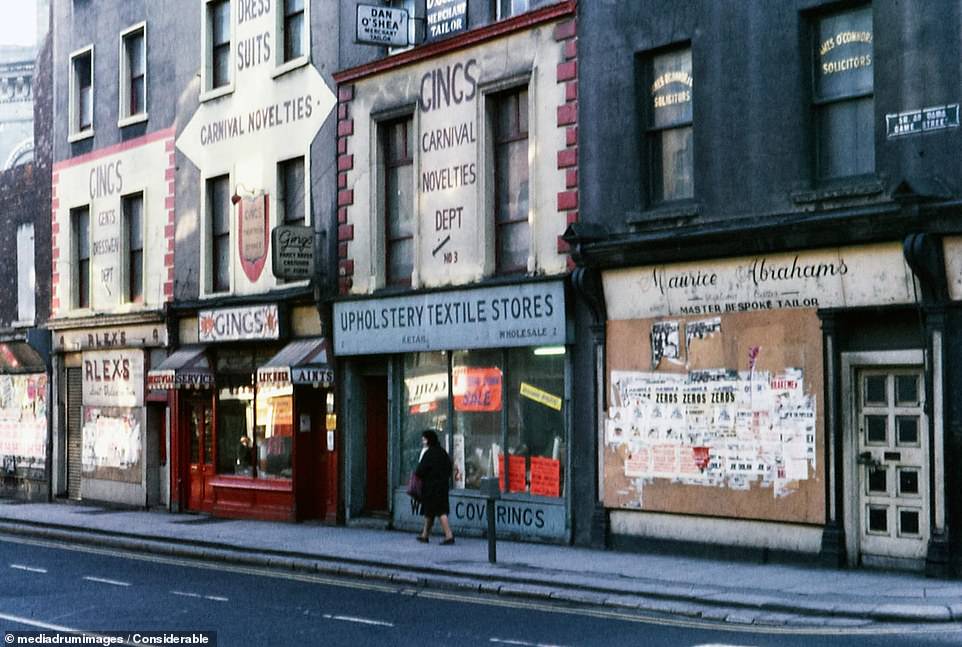 Shopping hub: A view of Dame Street in Dublin in the 1970s, featuring a range of traditional shops such as Maurice Abrahams, a ‘master bespoke tailor’; Gings theatre costume store; and the ‘upholstery textile stores’ the woman is walking past 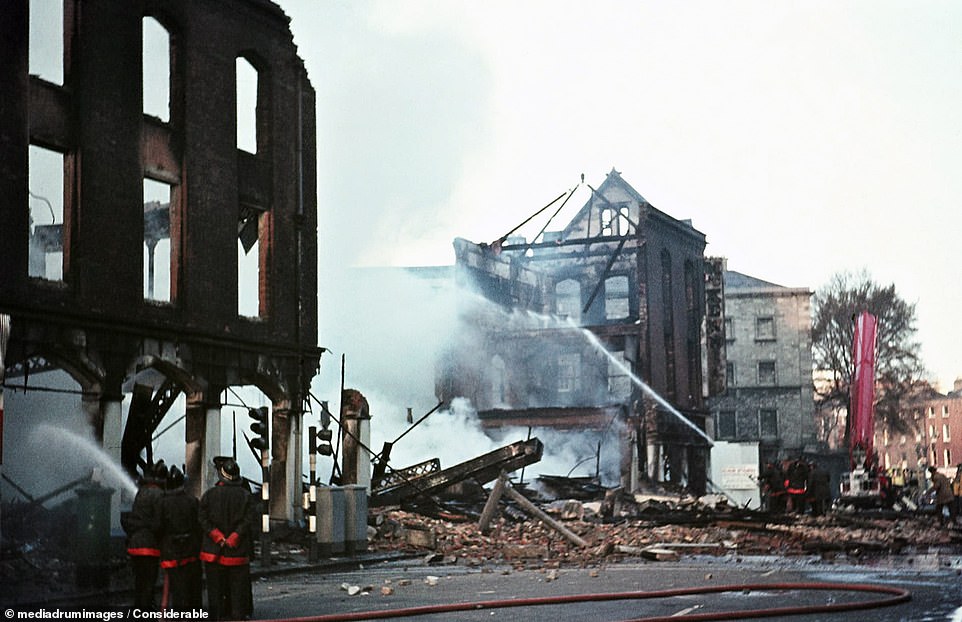 The clean-up begins: The aftermath of a huge fire at Thomas McKenzie & Sons Ltd, a warehouse on Pearse Street in Dublin which was destroyed by the blazed on April 9, 1970. It burned down despite sitting near the Tara Street fire station

Nun of that: A woman in religious habit walks along O’Connell Street in Dublin with a woman wearing a yellow dress, while a man carries a ladder and another woman holds an umbrella while a man cycles by, in a scene captured in June 1963