Leo Varadkar called for big companies to pay their taxes as he presented an award to the boss of Apple, which was granted a €13billion tax break by Ireland.

The Taoiseach welcomed Tim Cook to Dublin this morning where he handed the tech titan’s chief executive a special recognition gong for investment in Ireland.

He later insisted he had plugged the financial loopholes being exploited by multinationals.

But it fell on deaf ears because he is currently fighting a ruling from the European Commission that the Irish state had given undue tax benefits worth 13billion euros to Apple – illegal under EU state aid rules – and allowed Apple to pay substantially less tax than other businesses.

Leo Varadkar (second right) called for big companies to pay their taxes as he presented an award to the boss of Apple Tim Cook (second left), which the Irish premier gave a 13billion-euro tax break 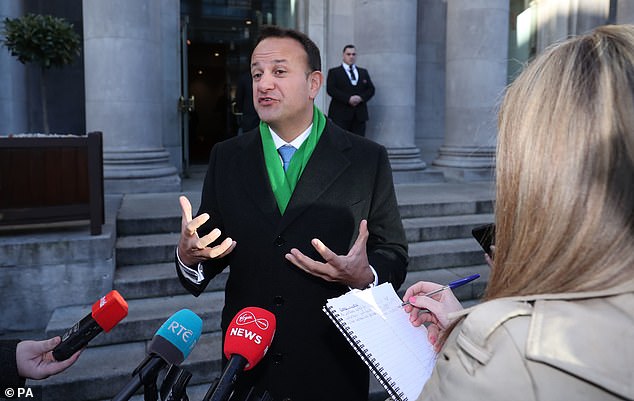 Ireland was ordered to recover the illegal aid, plus interest, however the state and Apple are currently appealing against the ruling.

Political rivals have claimed this shows Fine Gael’s dedication to corporations rather than the public.

Speaking to the media, Mr Varadkar was asked if he and Mr Cook discussed Apple’s much litigated tax bill, to which he replied: ‘Not today, we have in the past, but it is before the courts so the courts will decide on that.’

The Taoiseach added: ‘I’m a firm believer that big companies should pay their taxes and that’s why we’ve changed the rules, we got rid of double Irish (a tax avoidance technique), of stateless corporations, we got rid of a lot of the loopholes that allowed big companies to avoid tax, which is why we’re taking so much money in now in corporation tax that we have closed those loopholes.

‘Things are changing, there are going to be new international rules on corporation tax and we need to be part of shaping those rules, and we will be.

‘The likelihood is that will result in a fall-off in the amount we take in on corporation tax over the next couple of years, and we’ve factored that in to our financial plans. 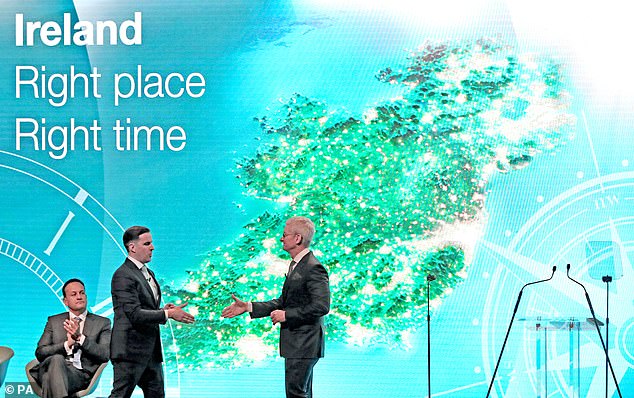 ‘Our financial plans are Brexit-proofed, and proofed against any drop in corporation tax in the next number of years, you’re not seeing that from the other parties, if they see a surplus, they want to spend it and we all know what happens when you do that, the surplus isn’t there when you need it, and that’s the reason why we shouldn’t trust them with this country.

‘I’m a big supporter of multinational investment, I know some people criticise FDI, the big companies that invest in Ireland, but I know the real story, that they create and sustain a quarter of a million jobs per year, contribute 8-10 billion a year in taxes, roughly the cost of running our education system, so we need more foreign direct investment.’

Apple established its first operation in Europe in Cork in 1980 and currently employs more than 6,000 people across the country, with over 104 nationalities represented.

Mr Cook said: ‘It is no exaggeration that Cork gave Apple the sure foundation that made us the company that we are today, those first 60 employees took a chance on an idea that seemed a little crazy in 1990, today we have nearly 6,000 employees across Ireland, and tell the story of Ireland’s welcoming and inclusive culture.’ 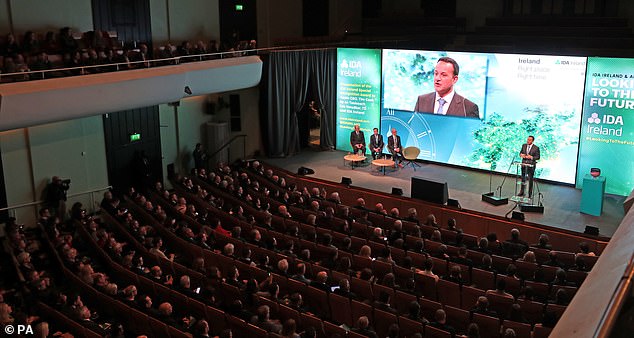 He added that Apple’s commitment to Ireland is ‘unshakeable’.

IDA Ireland chief executive Martin Shanahan said: ‘Apple’s Cork site is an example of what is possible when a great company finds an exceptional pool of talent.

‘Apple and its CEO have demonstrated continued commitment to Ireland over that 40 years – making Apple a very deserving recipient of this inaugural award.

‘The impact of Apple’s investment and innovation extends far beyond its own campus to the hundreds of companies and merchants of all sizes, across the country, who benefit from Apple’s presence in Ireland.’