Ten influencers living together in a TikTok house in Ireland have been forced to find a second property to live in after being ‘kicked out’ – just days after they posted a dance challenge clip that appeared to show a couple having sex in the background.

While many viewers suggested the video was ‘staged’ – something the housemates have denied – it now appears that posting the controversial clip may have led to them leaving the luxury Dublin property – complete with its own private chef – which they’ve been enjoying for six weeks.

In a post on the house’s Instagram account this morning @gohousedublin, a post simply read: ‘It was hard to say goodbye, but bigger and better things are around the corner…’ and accompanied a montage of the housemates’ best moments in the property.

Three of the Irish TikTok stars, influencers Andrea Camila, Shauna Davitt and Lauren Whelan, are seen dancing in the Dublin house where they’ve been living for six weeks but viewers were more than a little distracted by the raunchy antics going on in the background – today, it was revealed the housemates have now left the property 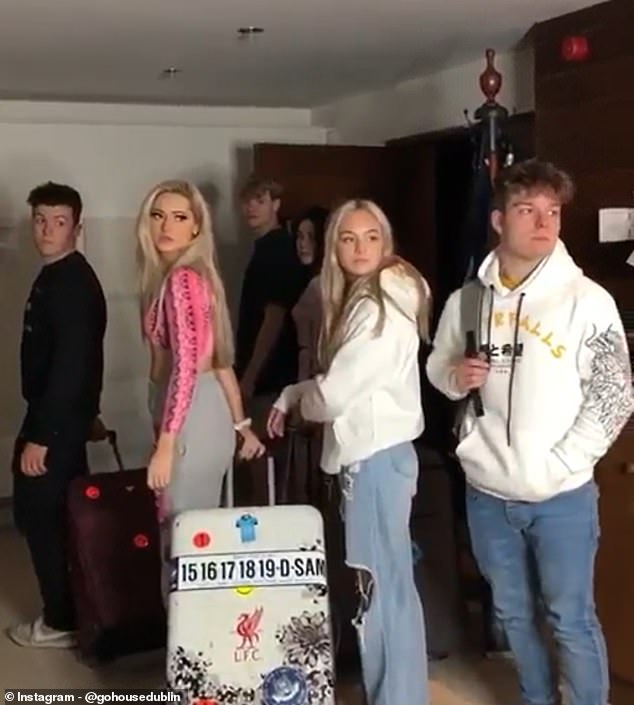 Off they go: The Irish influencers, who moved in together six weeks ago to raise their profiles on social media, are heading to a second ‘less nice’ house, they’ve revealed, saying they’d been ‘kicked out’

They nicknamed the property, the G.O.A.T. House (greatest of all time) but left the home yesterday after the house’s founder, Thomas Arnold, told his fellow housemates they had to go.

He said: ‘We basically have to move house. It’s a nice house but it’s still not this house. We’re being kicked out of the house. We’re moving there on Tuesday we have to leave here at 11am.’

Housemate Lauren Whelan responded to the news, saying: ‘I don’t really care like. As long as I’m part of the house, I don’t care like where the house is.’

In a video posted earlier this week, influencers Andrea Camila, Shauna Davitt and Lauren Whelan, were seen whipping their hair and dancing in the property’s trendy courtyard while completing a popular TikTok dance challenge. 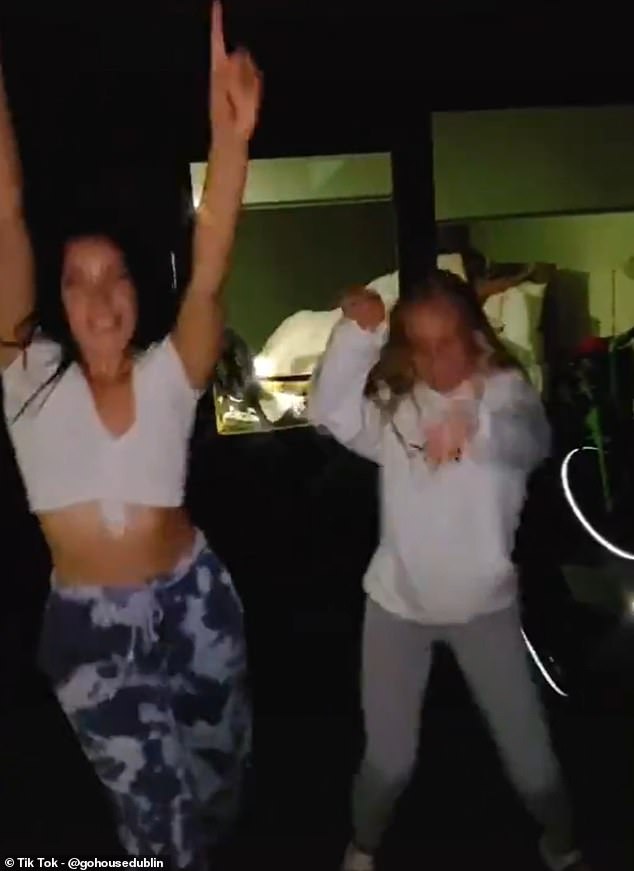 One you see it: The couple in the background are caught in a passionate embrace but the housemates have denied that it was set up to get more traffic 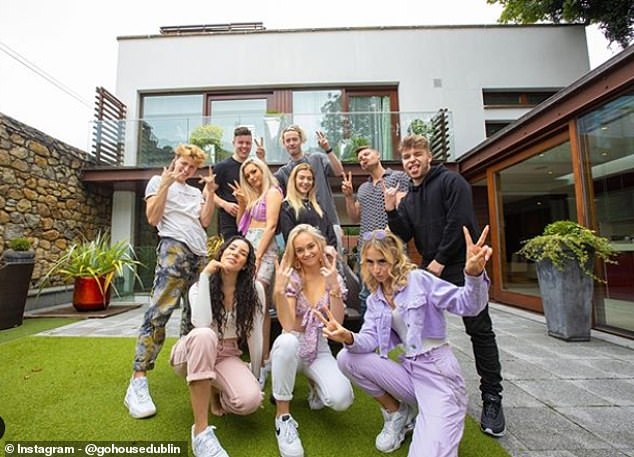 However, it quickly emerged as the camera followed their moves that there was a show-stealing scene going on in the background, a couple apparently having passionate sex in one of the bedrooms.

Despite many followers of the house on Twitter claiming the raunchy background antics were staged, a member of the house yesterday said it hadn’t been set up and they were still trying to find out exactly who had been caught on camera.

One viewer who was unconvinced was @stopdropandroII, who wrote: ‘Not sure I believe that this is real—who tries that hard to keep the blankets on all the way up to their necks? And the second dancer definitely saw this going on when she was facing the window for a good 20 seconds. Fake.’

@shakedowne wrote: ‘I’m one of the founders of this house. 1. It wasn’t planned 2. Nobody will admit who it was in the bed, we’re still trying to figure it out’

The housemates are now moving to a second property to continue their content production. 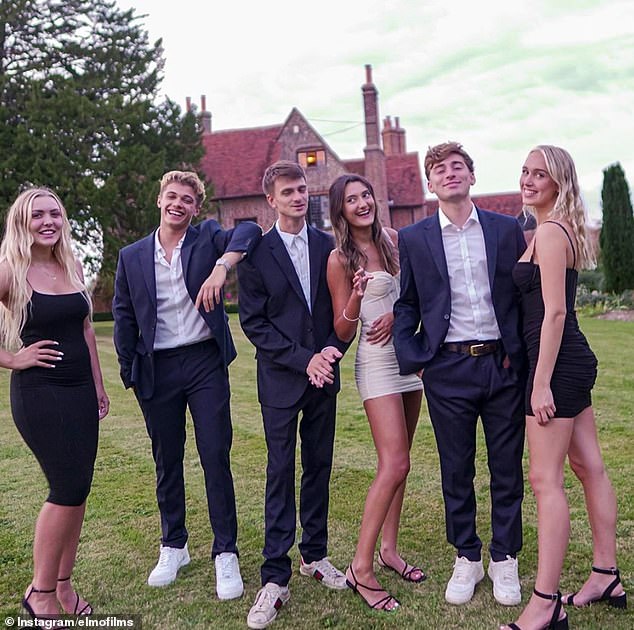 Over in England, six social media influencers (pictured)who have dubbed themselves ‘The Wave House’, have moved into a £5million mansion in the British countryside 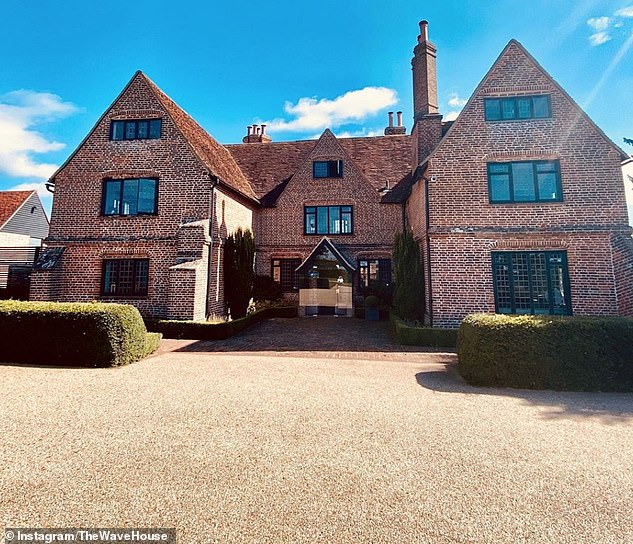 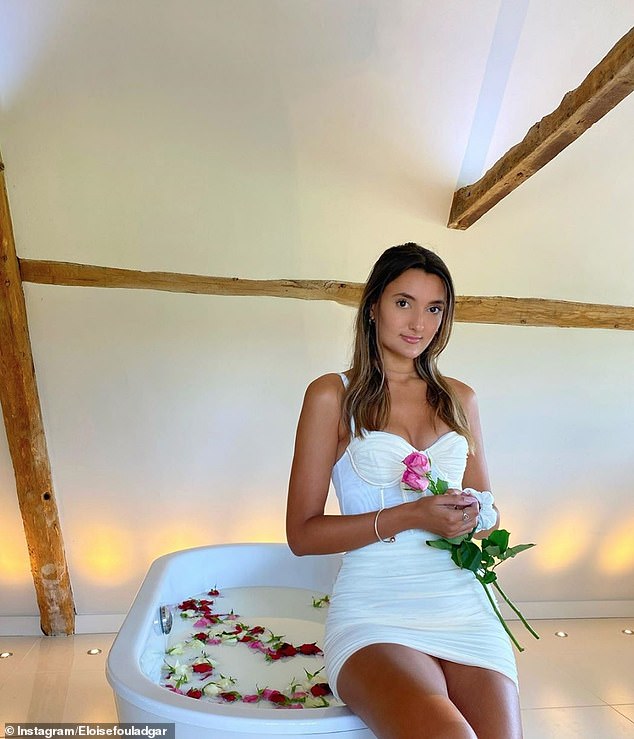 The first member of the Wave House is London-based influencer Eloise, 22, (pictured) who rose to fame making TikTok videos, and now boasts 2.4million followers and 62.7million likes on the platform

In September, it was revealed that a group of six British influencers in their early 20s who have dubbed themselves ‘The Wave House’, had moved into a £5million mansion in the British countryside,on the outskirts of London, where they will live together and create videos for the platform.

At the start of this month, the first video on the collective’s TikTok account appeared, promoting the influencers new luxury digs which includes 13-acres of land, a swimming pool, gym, spa and a 100-inch TV which cost almost £30,000.