Not dead yet: Dublin football club Ballybrack FC said Fernando Nuno La Fuente Saiz – who is alive and well in Galway – died in a crash

An amateur Irish football club has apologised for a ‘gross error of judgment’ after falsely reporting that one of its players had died in order to get a match cancelled this weekend.

Ballybrack FC, based in Dublin, told the Leinster Senior League that Fernando Nuno La Fuente Saiz, a Spanish native, had been killed in a traffic accident last Thursday.

The side’s game against Arklow Town on Saturday was postponed, while other teams in the league held a minute’s silence and wore black armbands in honour of the player.

The Leinster Senior League even posted a notice of his death in Irish newspaper The Herald – before it was discovered that Mr La Fuente Saiz was alive and well at his home in Galway.

Speaking to the Irish Daily Mail last night, Mr La Fuente Saiz said: ‘I have to call my wife in Spain before she hears the news.’

‘I haven’t played with Ballybrack FC since I moved to Galway  in September as it is too far away. I knew something dodgy was going on but I did not know to what extent.

‘I am only hearing now from news articles [about false claims of being dead]. I am trying to digest it.’

Ballybrack FC’s secretary resigned yesterday, after the club put out a statement on Facebook describing the incident as a ‘grave and unacceptable mistake’. 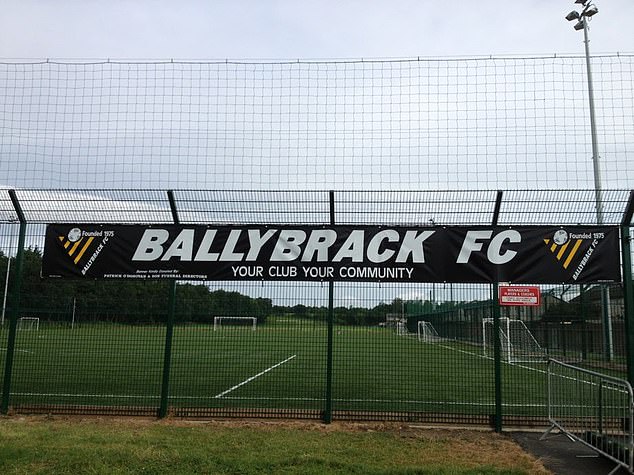 Extreme measures: Ballybrack FC have been accused of lying about the player’s death to the Leinster Senior League in order to get a game cancelled this weekend 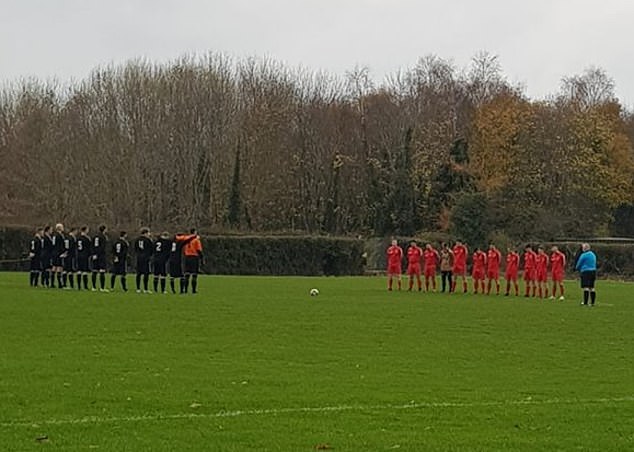 Mourning: Liffey Wanderers FC and another Leinster Senior League team are seen observing a minute’s silence at a game on Saturday, which saw them play wearing black armbands 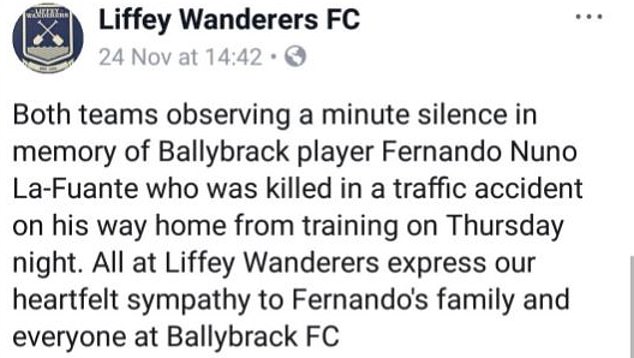 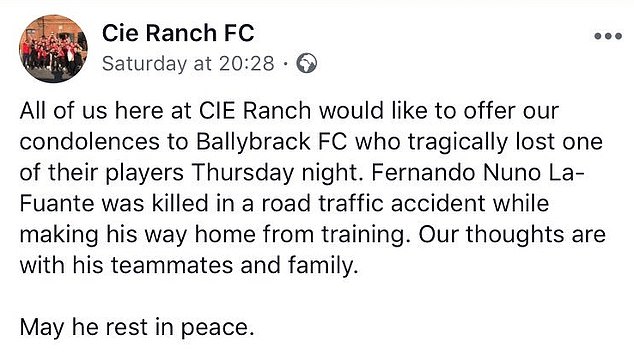 Condolences: Several teams in the same league offered their condolences on social media

‘It has come to the attention of both the club, senior players and the management team that a gross error of judgment has occurred emanating from correspondence sent from a member of the senior set up management team to the Leinster Senior League,’ the statement reads.

‘This grave and unacceptable mistake was completely out of character and was made by a person who has been experiencing severe personal difficulties unbeknownst to any other members of the club.’

It added: ‘At this stage we can only offer our sincere apologies to the Leinster Senior League, our opponents Arklow Town FC and the host of clubs and football people who made contact with us or offered messages of support in recent days.’

The club added that ‘the person in question has been relieved of all footballing duties’ following an emergency meeting. 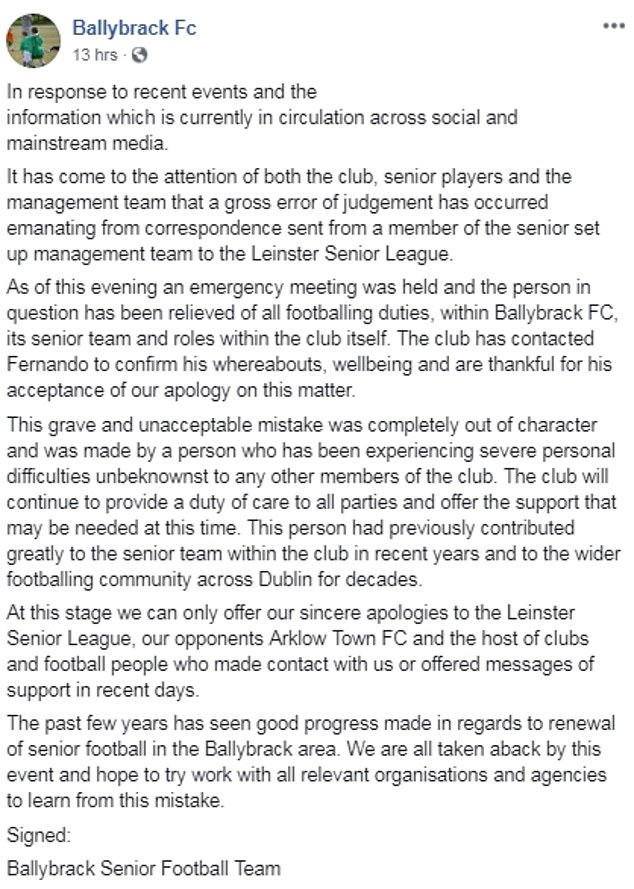 Statement: Ballybrack FC apologised for their behaviour on Facebook

Leinster Senior League chairman David Moran has blasted Ballybrack FC for its ‘disgraceful’ behaviour, saying it was shocking the club would stoop ‘that low for a game of ball’.

Mr Moran said the story ‘started to unravel’ after the league had enquired about offering support to the family.

‘We wanted to show our sympathies and go to the Mass and maybe meet the family and see what we could do to help in this horrible situation,’ he said.

‘And we were told [the body] was flown back to Spain on the Saturday. Straight away, that rang alarm bells for us.

‘We checked the hospitals, we checked everywhere. Nobody could find anything about this young fella.’

The league issued a statement saying that it had acted in ‘good faith’ after being informed of the death, but added: ‘The league would like to offer their sincerest apologies for any distress caused as a result of notifying clubs as to the demise of a valued player.’