Tears of joy have been spread across Ireland today as supporters of abortion reform have won a landslide victory in a historic referendum.

Voters cast their ballots yesterday on whether to overhaul the country’s Eight Amendment which makes abortions illegal except in cases where it endangers a mother’s life.

But today anti-abortion campaign leaders conceded defeat in the vote after exit polls predicted almost 70 per cent said Yes to repealing the amendment.

This morning Save the Eighth spokesman John McGuirk said it was clear the electorate had ‘come down on the other side’.

Speaking to RTE he added: ‘There is no prospect of the (abortion rights) legislation not being passed.’

The polling data, which suggests seven out of 10 voters backed reform, meant advocates for change were celebrating long before the first ballot boxes were opened at 9am today at count centres across the country.

One poll by national broadcaster RTE suggested around 70% of the electorate have voted to end the country’s all but blanket ban on terminations, with another, by The Irish Times, recording 68 per cent in favour of ditching the prohibition. 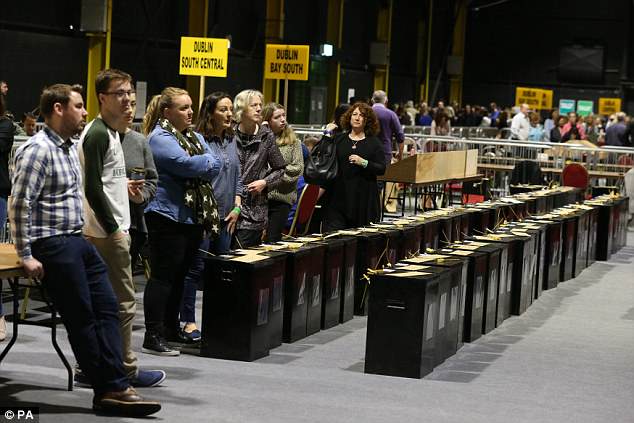 The polling data, which suggests seven out of 10 voters backed reform, meant advocates for change were celebrating long before the first ballot boxes were opened at 9am 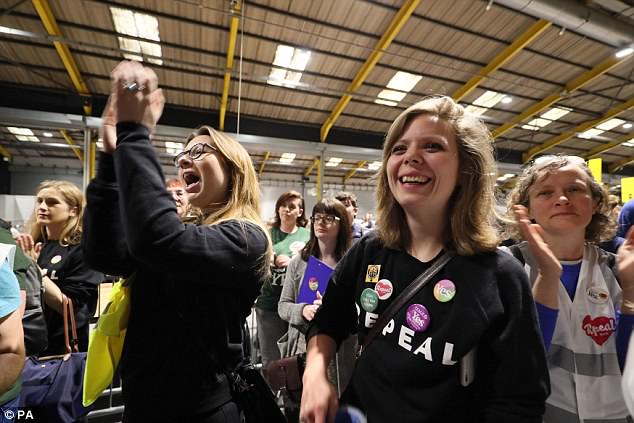 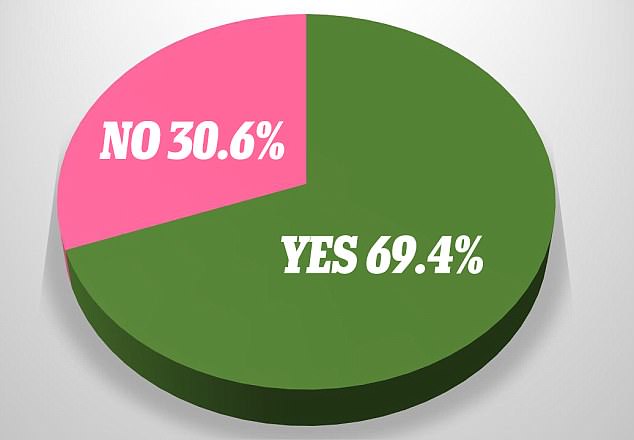 An exit poll by Irish broadcaster RTE predicted a Yes vote of 69.4 per cent in Ireland’s abortion referendum, while nn Ipsos/MRBI poll expected a similar 68 per cent result 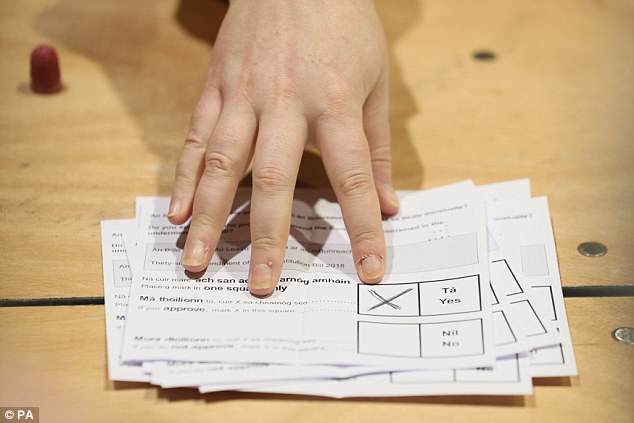 Pictured: Votes being counted in Dublin. A Save the Eighth spokesman said there was now ‘no prospect of abortion rights legislation not being passed’

While the official result is not due until later on Saturday, it appears Ireland is on the cusp of a defining moment in its social history.

Reacting to the exit polls on Friday night, Taoiseach Leo Varadkar, a vocal proponent of liberalisation, tweeted: ‘It’s looking like we will make history tomorrow.’

Thousands of Irish citizens living overseas travelled home in droves to exercise their democratic right on the emotive issue.

The vote saw citizens effectively opt to either retain or repeal the Eighth Amendment of the state’s constitution, which prohibits terminations unless a mother’s life is in danger.

The specific question people were asked was whether they wanted to see the Eighth Amendment replaced with wording in the constitution that would hand politicians the responsibility to set future laws on abortion, unhindered by constitutional strictures.

If the Yes vote is confirmed, the Irish Government intends to legislate by the end of the year to make it relatively easy for a woman to obtain the procedure in early pregnancy.

Ministers have promised to allow terminations within the first 12 weeks, subject to medical advice and a cooling-off period, and between 12 and 24 weeks in exceptional circumstances.

‘But those who voted No should take heart. Abortion on demand would deal Ireland a tragic blow but the pro-life movement will rise to any challenge it faces.’

The exit polls represent a remarkable turnaround in public opinion in little over a generation. In 1983, 67% citizens voted to insert the Eighth Amendment into the constitution.

The seismic reversal in opinion seems to have been delivered by the younger generations. 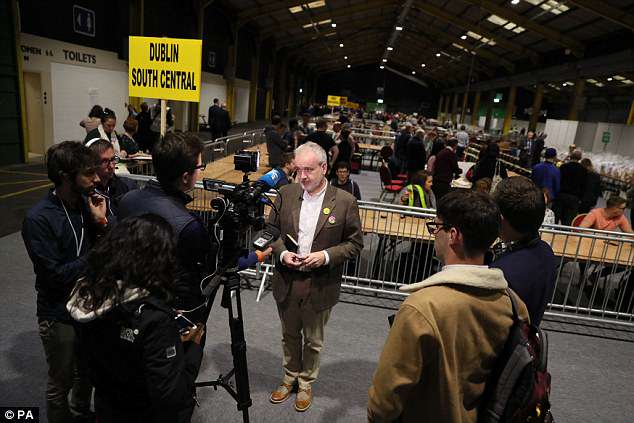 While the official result is not due until later on Saturday, it appears Ireland is on the cusp of a defining moment in its social history 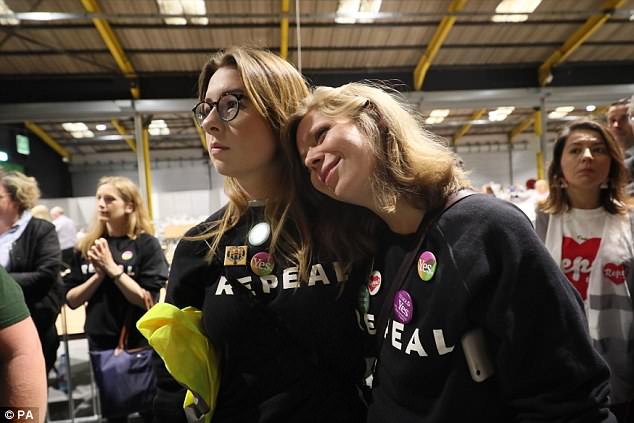 People under the age of 53 could not vote in 1983. On Friday, those age groups seem to have backed Yes in overwhelming fashion.

Almost 90% of voters under 25 appear to have voted Yes.

Those aged 35-49 endorsed repeal by around 73%, the exit polls indicate.

The only age group to vote No was the over 65s, indicating that those who backed the amendment in 1983 largely retain their opposition to abortion – they are now just outnumbered by younger generations committed to reform.

The Behaviour & Attitudes poll for RTE surveyed 3,800 people at 175 polling stations across the country.

The exit poll conducted for The Irish Times indicated a 68% to 32% Yes vote. 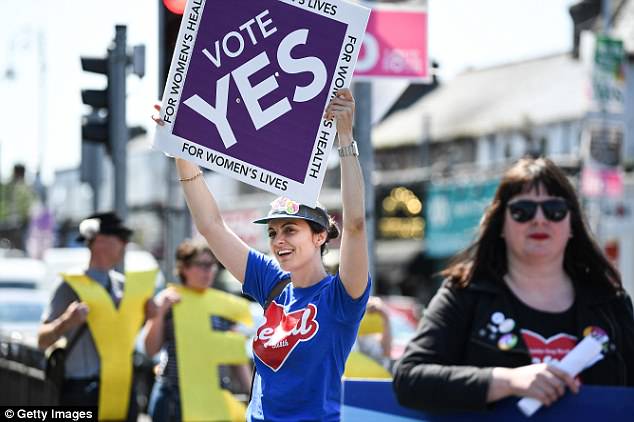 Yes voters argue that Ireland’s system has not stopped abortion happening, with an estimated 3,000 women going to the UK for a procedure each year 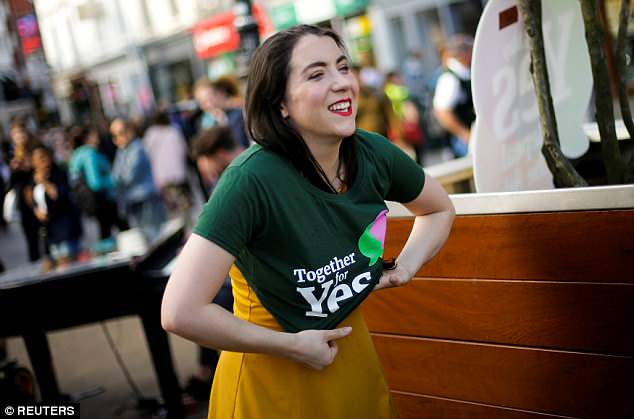 A Yes vote would mark another historic milestone for deeply Catholic Ireland which legalised contraception in 1979, divorce in 1995 and same-sex marriage in 2015 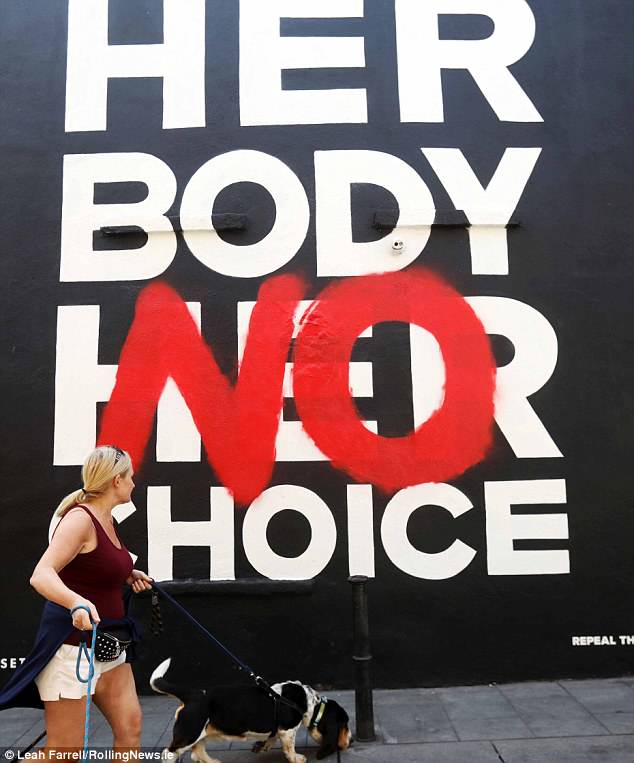 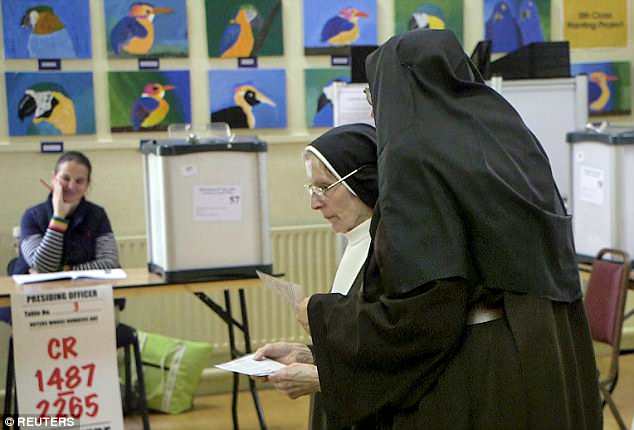 A pair of nuns prepare to cast their votes in the referendum. The Catholic Church has thrown its weight behind the No campaign

That poll, which has a margin of error is estimated at +/- 1.5%, saw 4,000 voters interviewed by Ipsos/MRBI as they left 160 polling stations on Friday.

As predicted, urban areas appear to have been more strongly in favour of repeal, at just over 70%.

But according to the polls, rural areas also voted Yes, with around 60 to 63% in favour.

A total of 3.3 million citizens were registered to vote in Friday’s referendum.

The Catholic Church was among influential voices calling for a No vote, arguing that the life of the unborn should be sacrosanct.

But the Yes camp, which portrayed itself as modernising and in step with international opinion, insisted repeal would demonstrate Ireland’s compassion for thousands of Irish women forced to travel to England for the procedure.

A decade after the Eighth Amendment was approved, women in Ireland were officially given the right to travel abroad, mostly to the UK, to obtain terminations. Pro-repeal campaigners say almost 170,000 have done so.

The liberalisation campaign gathered momentum in 2012 after an Indian dentist, Savita Halappanavar, died in hospital in Galway aged 31 when she was refused an abortion during a miscarriage.

In 2013, following an outcry over Mrs Halappanavar’s death, legislation was amended to allow terminations under certain tightly restricted circumstances.

That did not sate the demand of pro-choice advocates.

Under pressure from the UN about alleged degrading treatment of women who travelled to England for terminations, the Irish Government began exploring the possibility of further reform, culminating in the calling of Friday’s referendum and the promise to legislate.

A referendum on Friday will decide whether to overhaul Ireland’s strict abortion laws. Here is a timeline of the key events.

1861: Abortion is banned in Ireland under the Offences Against the Person Act.

1967: A private member’s bill brought by David Steel MP led to the UK’s Abortion Act 1967, which is still the law governing abortions in England, Scotland and Wales but not Northern Ireland.

Many other countries also liberalised rules governing the procedure.

1983: A referendum in Ireland led to the Eighth Amendment to the constitution recognising the right to life of the unborn child.

1986: The High Court ruled that the availability to women in Ireland of information on abortion outside Ireland breached the constitution as it undermined the child’s right to life.

1992: A teenage rape victim in Ireland who was suffering from suicidal thoughts was prevented by the courts from terminating her pregnancy in England.

It was dubbed the X Case and was the subject of a ruling from Ireland’s highest court, the Supreme Court, which overturned the decision.

Judges said a realistic threat of suicide constituted grounds for an abortion.

Two referendums were held and as a result the constitution was amended to ensure Irish women had the freedom to travel to other countries to seek terminations.

Medical practitioners still faced uncertainty over when the procedure could be carried out in Ireland.

2002: Another referendum was held to decide if the threat of suicide as a ground for legal abortion should be removed. It was rejected.

2010: The European Court of Human Rights ruled that Ireland had not provided clarity on the availability of abortion in cases where a mother’s life was at risk.

2012: Indian dentist Savita Halappanavar died in a hospital in Galway after being denied an abortion during a miscarriage.

Her husband Praveen Halappanavar claimed she requested a termination but was refused because the baby’s heart was still beating.

A midwife manager at Galway University Hospital has confirmed that she told Mrs Halappanavar a termination could not be carried out because Ireland was a ‘Catholic country’.

2013: Abortion law was amended to allow terminations under certain strictly-defined circumstances – the Protection of Life During Pregnancy Act.

For the first time, processes were set out to establish the circumstances in which there was a real and substantial risk to the life, not the health, of a woman, and where the only treatment that would avert that risk was an abortion.

It also introduced a maximum penalty of 14 years’ imprisonment for having or assisting in an unlawful abortion.

The law meant the state had finally legislated on the 1992 Supreme Court X Case.

2015: The UN Committee on Economic, Social and Cultural Rights expressed concern at Ireland’s ‘highly restrictive’ legislation on abortion and called for another referendum.

2016: The UN found that Amanda Mellet, who had been carrying a foetus with a fatal abnormality, had been subjected to discrimination and cruel, inhuman or degrading treatment due to Ireland’s abortion prohibition.

She had to travel abroad for the procedure and was forced to leave the remains of her baby behind before they were eventually delivered by courier.

The UN called for the strict prohibition in Ireland to be reversed.

The Irish Government outlined terms of reference for a Citizens’ Assembly to begin examining the Eighth Amendment of the constitution and advise the Government.

2017: The Assembly recommended that unrestricted access to abortion during early pregnancy be introduced.

The Government promised to hold a referendum in 2018 on whether to change the law.

2018: Housing Minister Eoghan Murphy set the poll date as May 25.

Voters were to be asked if they wanted to repeal the Eighth Amendment, which would give the Government freedom to legislate to regulate termination of pregnancy.

The Government has published proposals for a new law if the referendum is passed giving relatively unrestricted access to abortion during the first 12 weeks, subject to medical advice and a period of reflection.

If, after 12 weeks, a woman’s life is threatened or there could be serious harm to her health, two doctors will consider whether to allow the procedure.

Terminations will not be carried out after the foetus becomes viable, following 24 weeks of pregnancy.