Is a jab that makes you feel full a way to lose weight?

With her trim figure showcased in an elegant lace dress, Caroline Balazs is a great advert for what she preaches.

The mother of two struggled with her weight for years — family photos show her burgeoning bosom and expanded waistline. But since March this year, she has slimmed to a trim size 10.

Her transformation was due not to a diet but to a controversial Botox-type injection called SkinnyJab, which claims to melt away fat, control blood sugar and curb cravings.

The jab is still a new treatment and Caroline, an aesthetic specialist, is one of a handful of practitioners pioneering it in the UK. She says she has treated 350 people since April, with an average weight loss of 13lb after one three-week course of the drug.

SkinnyJab comes in an automatic pen — like an insulin pen — that patients use to inject themselves in the stomach daily. Each pen costs £200 and lasts three weeks. Losing two stone, says Caroline, takes six to nine weeks.

Astonishingly, she predicts the jab will eliminate obesity within a decade.

‘What Botox did to wrinkles, SkinnyJab will do for weight loss,’ she declares — quite a claim, considering more than a million women a year have Botox, and its market value is £3.6 billion.

But could Caroline be right? And can it really be good for you to lose so much weight with an injection?

The core ingredient of SkinnyJab, liraglutide, was developed in America three years ago to help morbidly obese diabetics, but was only licensed in the UK for use in weight loss in January this year. It is not available on the NHS but a few private practitioners offer it as a weight-loss aid, with Caroline the first to market it as ‘SkinnyJab’.

Rachael, who is engaged, says the injection improved her energy and shed pounds

Liraglutide mimics hormones called incretins that our bodies produce after we eat a meal, which make us feel full. But while levels of these natural hormones quickly subside, liraglutide remains in your system, making you feel full for longer.

The drug also reduces the speed at which the stomach empties after eating — again keeping you satisfied longer, Caroline says. Finally, liraglutide plays a role in regulating blood sugar levels and can help prevent highs and lows over the day.

It certainly sounds like the weight-loss solution so many women have dreamt of. Women like Rachael Morris, a 41-year-old company director from Liverpool, who has been using SkinnyJab since April and has so far had three injector pens, costing £600. She has lost 25lb, shedding 9lb in the first week, and gone from a size 16-18 to a 10-12.

She says: ‘What stopped me slimming was time. If I didn’t finish work until late, I just couldn’t be bothered to cook, so convenience food was an easy option.’

She says she exercised regularly but eating microwave meals made her 5ft 5in frame balloon.

Rachael, who is engaged, says she tried ‘every diet going’ without success: ‘It’s harder to lose weight as you get older. I felt horrible, constantly bloated and was struggling every day with low energy.’

SkinnyJab, she says, changed everything. ‘After my first injection, my hunger subsided and my energy increased. I couldn’t believe I was hardly eating anything.’

Rachael is thrilled — but some experts have serious doubts, saying the injection does nothing to combat underlying weight-gain issues.

Dr Michael Barnish, a specialist in micronutrition, says: ‘Many are worried it will prevent people opting for good, healthy lifestyle choices, as it’s an easier option.

‘Obesity is linked with a number of life-threatening illnesses, such as heart disease. But if someone reduces their weight by a few kilograms following the SkinnyJab, this does not necessarily mean their chance of contracting a disease is lower.

‘If we reduce weight with a medicine and mask underlying bad habits such as poor diet and no exercise, in my opinion it is quite likely these diseases will not be halted.’

Nutritional therapist Jeannie Di Bon agrees. ‘You need to be in control of your body and your own weight loss,’ she says. ‘Using something like SkinnyJab involves hoping for a quick fix, which a multitude of past products and fads have shown us doesn’t work.’ 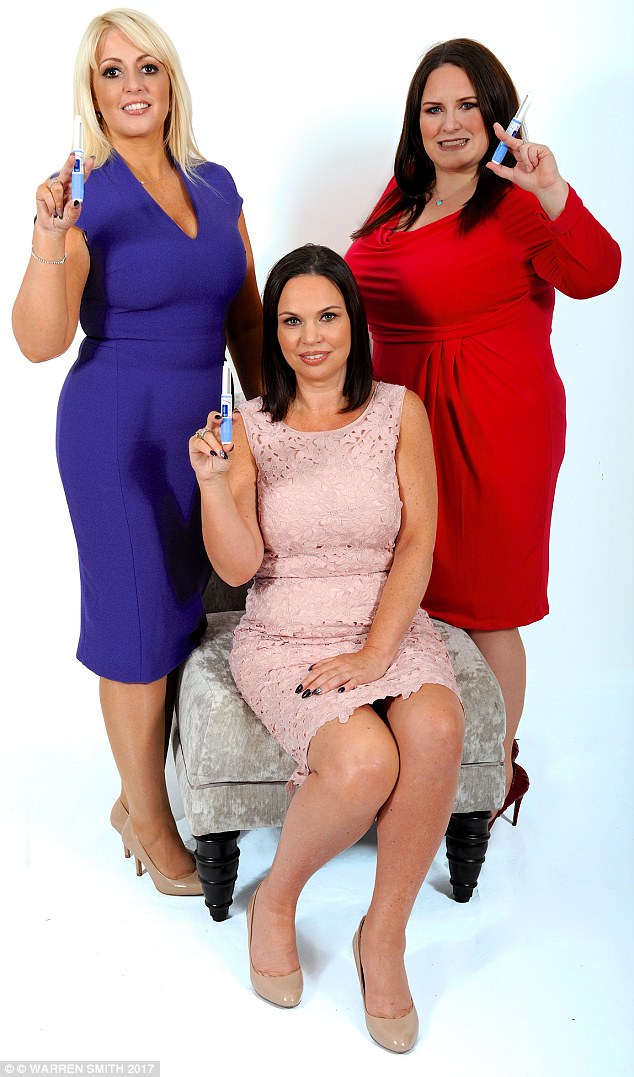 Bridget Clarke, 30, pictured right says Skinnyjab helped her go from a size 22 to a size 16-18

But Caroline disagrees and says she can personally testify to the power of SkinnyJab.

‘I was dumped by my long-term partner in February, who told me it was down to the extra two stone I’d been carrying around since hitting my 40s,’ she says. ‘I was crying for weeks.’

The 48-year-old, who lives in Manchester, visited her GP for help with weight loss in March and learnt about liraglutide, which had just been licensed but was little known in the UK. After obtaining a private prescription from another doctor, she lost 24lb in six weeks, going from a size 16 to a 10.

Caroline, a former intensive care nurse who moved into aesthetic medicine after the birth of her two children, is also a qualified advanced clinical practitioner, meaning she is able to prescribe many medicines. She decided to make the drug more widely available as SkinnyJab.

Today, it is available at her clinic in Warrington, Cheshire, and is soon to be offered at other UK clinics.

Caroline insists the side-effects are minimal, although headaches, constipation and heartburn have been reported. The long-term effects are unknown.

‘The drug works by maintaining your blood sugar and normalising its levels, so you can survive on a low-calorie diet without feeling hungry or getting sugar dips and rushes,’ Caroline says. ‘The body doesn’t understand that it’s dieting.’

Dr Barnish is less sure, however: ‘There is a lack of research so far on the effects of this drug on patients who want to lose weight rather than treat type 2 diabetes. If you’re not a type 2 diabetic, you could run the risk of low blood sugar.

‘Hypoglycaemia can cause fatigue, drowsiness, dizziness and make you feel generally unwell. If it’s severe enough, it could cause collapse or even seizure. Therefore high levels of blood sugar monitoring should be done, which can be time-intensive and requires regular finger pricks.’

Caroline says she carefully assesses patients’ mental and physical state and wouldn’t prescribe the drug to anyone who was underweight.

She warns against using any weight-loss medication without a face-to-face consultation with a reputable practitioner. Her patients can also contact a support service seven days a week, and their blood glucose levels are recorded before they start treatment and after each jab.

And what happens when you stop taking SkinnyJab? Will the pounds pile back on?

Caroline, who stopped taking it five weeks ago and says she has not regained weight, claims this isn’t a concern. ‘Other weight-loss solutions cause the body to go into “starvation” mode, so you put weight back on quickly. But with SkinnyJab, the body is put under no stress.’

There is no research yet to back her claim. Indeed, Caroline advises a ‘review and maintenance syringe every once in a while’, suggesting one or two injectors a year, costing £400.

In the past, when she wasn’t living on high-calorie ready meals and takeaways, Bridget, who is single, was a yo-yo dieter. ‘Finally, I feel hopeful,’ she says.

And no wonder – the results of SkinnyJab were instant. ‘Within hours of my first injection I’d no desire to snack or overeat. It was gone,’ she says. ‘I could only manage small portions and all I felt like eating were healthy foods.’

According to a study by the American Endocrine Society last year, liraglutide ‘may make high-fat foods less desirable to the brain’s reward centres’.

Indeed, Bridget insists: ‘I felt full and satisfied all the time’.

But nutritional therapist Jeannie Di Bon is still not persuaded. ‘Food cravings and hunger are naturally suppressed when you eat the right foods,’ she says. ‘No drugs are needed to achieve this, just the powerful machine that is your own body.’