Is a PANTHER on the loose in the Peak District? Camper says he filmed big cat feeding on dead sheep

Is a PANTHER on the loose in the Peak District? Camper says his mobile phone has captured big cat feeding on dead sheep

A teenage camper has captured footage of what he believes is a big cat feeding on a ‘dead sheep’ in the Peak District, sparking fears that a panther is prowling the British countryside.

Josh Williams, 17, had spent the night wild camping with a friend, in the British beauty spot, when they spotted what looked like a panther in the Peak District.

He quickly whipped out his mobile phone and was able to capture footage of the close encounter last Monday.

Panthers are most commonly found in the humid tropical forests of Asia and Africa, but the teenager said that he saw the big cat walking from Mermaid’s Pool in the Peak District in Derbyshire.

Panthers are most commonly found in the humid tropical forests of Asia and Africa, but the teenager said that he saw the big cat walking from Mermaid’s Pool in the Peak District in Derbyshire

He added that the creature sounded as if it was feasting on the carcass of another animal.

Josh said he was convinced the creature was a big cat and resembled a panther but could not be entirely sure what it was they saw.

He said: ‘We were both confused when we first saw it.

‘We stood staring at it and questioning what it could be for around five minutes before I decided to start recording so that I could zoom in and get a better look.

‘We tried attracting its attention so that it would turn and face us, so that we could get a better understanding of what we were looking at. 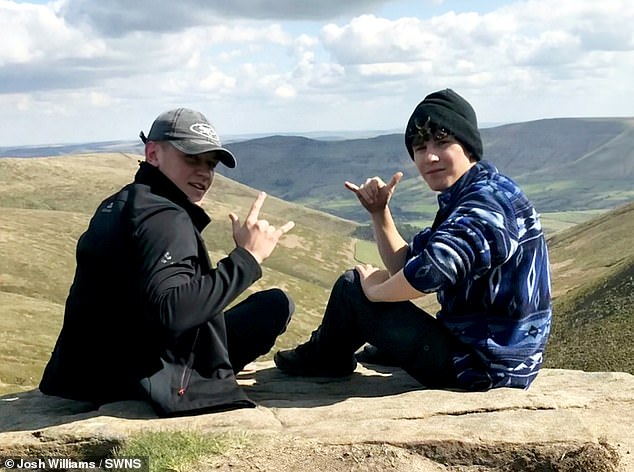 Josh Williams (left) had spent the night wild camping with a friend Ben Burns (right), in the British beauty spot, when they spotted what looked like a panther in the Peak District

‘We honestly had no idea what it could be if not a big cat.

‘It was in a field of sheep with no different animals around, and it appeared to have a long black tail, so it definitely wasn’t a sheep.

‘We didn’t hear much noise coming from the wild cat, just the occasional crunch, which made me think it was feeding on something like a dead animal – most likely a sheep.

‘We could instantly tell it was something different the moment we laid eyes on it – we both saw it at the same time and gave each other a confused look.

‘I could tell we were both thinking the same thing as the day before, we were actually discussing the possibility of us running into a wild cat whilst on our trip. 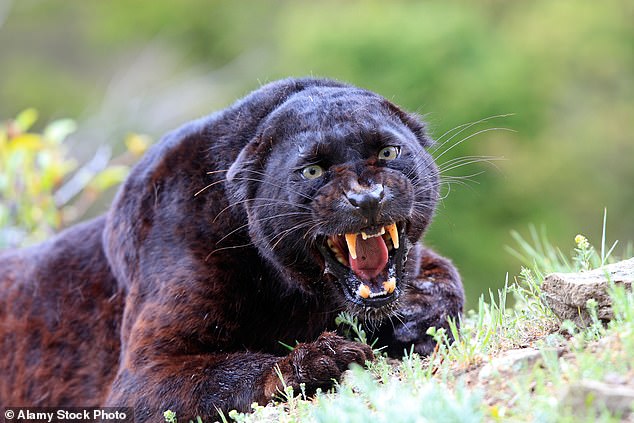 ‘The animals around it were seemingly unbothered, but they were certainly keeping their distance, as if they were used to this happening. It was eerie.

Josh and his friend Ben Burns continued to try and catch the wild cat’s attention, but were reluctant to enter the field the animal was in for their own safety.

Josh said: ‘We were standing looking at the animal for around 10 minutes trying to get its attention, but it didn’t budge – it just kept doing the exact same thing it was doing in the video.

‘We didn’t go closer as we were behind a fence and didn’t want to run the risk of becoming cat food.

‘The reason we didn’t stay for longer was that we had a train to catch and were running a bit behind on time after watching this animal for so long.

‘It just remained in the same position as we walked away.’

Josh said he was honoured to have captured footage of his potential wild cat encounter – with everyone he has shared the video with left shocked at their discovery.

He added: ‘We didn’t shut up about what we saw the entire way home, telling each other it can’t possibly be a wild cat.

‘But then that also begs the question, what the hell is it?

‘I showed the video to my college tutor and friends to make sure I wasn’t going crazy and they were all in disbelief.

‘I was glad I managed to capture it on video after the event unfolded as I knew that nobody would believe me if I told them I had seen a panther in the Peak District the first time I went camping.’