Is a vegan KitKat really as good as the real thing?

Do vegan KitKats REALLY taste as good as the real thing? As the plant-based chocolate bar arrives in the UK, FEMAIL puts it to the test – with surprising results

The bar was developed by chocolatiers and food scientists in Nestlé’s Research and Development centre in York, the original home of KitKat.

Louise Barrett, Head of the Nestlé Confectionery Product Technology Centre told Femail: ‘Our challenge when we set out to create a vegan-friendly KitKat was to recreate this iconic product using plant-based alternatives.

‘To achieve this, we worked very hard to get the right balance between the milk alternative and the cocoa. The result is a vegan chocolate that we’re very proud of, and that we hope will be enjoyed by KitKat fans everywhere.’

Nestle delighted fans last week after launching their highly anticipated vegan KitKat bar. The KitKat V, a plant-based alternative to their best-selling treat, is currently being sold exclusively in Sainsbury’s stores across the UK and is made from smooth chocolate blended with a rice-based alternative to milk

Less sweet, but a great alternative for vegans, FEMAIL tries out the vegan bar… 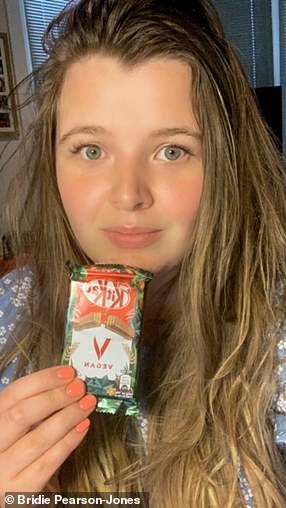 If I didn’t know this was vegan and someone presented it to me as the real thing, I probably wouldn’t have blinked an eye.

But, I did know and could definitely notice a few differences, if really paying attention!

The bar smells delicious and very chocolatey, and other than the green wrapper it looks identical to the usual four-finger bar, and has the same crunch which is perfect for a coffee break or with a cuppa.

The wafer is crispy and indistinguishable from the original, while the chocolate is less sweet and has a slightly more dull flavour than the real deal, which may be down to having having less sugar (14.2g per four fingers rather than 20.5g).

It’s also creamier and a distinctively different texture. The bar is made from cocoa butter (which means it’s higher in fat than the original), meaning there’s a slight sliminess on the tongue if it’s kept in the the mouth for a while – but it’s moreish nonetheless!

Overall, if you’re vegan and have missed the treat I think it would be exactly as you remember, and it’s a good option for anyone hoping to eat more plant-based too.

How does KitKat V compare to the original in nutritional value?