Is adding WATER the key to perfect crispy bacon?

It’s all too easy to end up with limp and greasy strips of bacon when frying in a pan but now cooking experts have shared a hack that guarantees crispy slices every time.

Kitchen testers at food website Delish conducted an experiment to find out if adding a splash of water to a pan helps make bacon slices crispier.

The test showed that water not only gives the meat a crunch, but also stops bacon fat from dangerous spitting.

The bacon cooked the normal way ended up crispy, but the chef ended up with far more bacon grease splatters on the stovetop and on her apron.

The bacon cooked with water did not splatter, and also resulted in stronger, less brittle and even crispier slices, the findings showed. 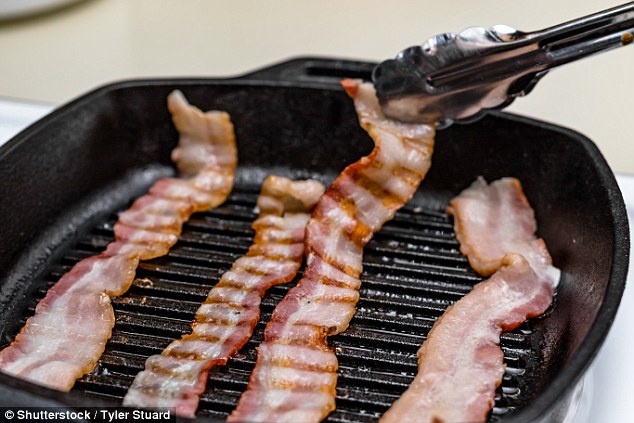 The bacon was also ‘slightly chewy’.

Delish concluded that the test proved that the best way to cook bacon on the stove is to add enough water to cover the bottom of a pan.

However the experts revealed that when cooking six slices of bacon or more, their full-proof technique for crispy bacon is to cook it at 400 degrees Farenheit in the oven for 20 minutes.

Some chefs swear by cooking their bacon in the microwave.

All you have to do is arrange slices of bacon on a plate covered in a double layer of paper towels before covering with another paper towel – these will collect most of the grease.

Then cook on high for two minutes, before turning the bacon over and cooking for another two minutes.

Repeat until they reach the right crispiness for your liking.