Is BBC set to impose no-jab no-job rule on stars to avoid another Strictly vaccine fiasco?

The BBC is considering a ‘no jab, no job’ rule for some of its programmes to prevent a repeat of the Strictly Come Dancing vaccine chaos, as the troubled show is beset with seething unrest.

Sources have told The Mail on Sunday that Corporation bosses are becoming ‘very stressed out’ by the scandal and are now discussing introducing a new policy for future talent. One insider described the current situation as ‘nothing short of a nightmare’.

The controversy was sparked when three professional dancers refused the Covid vaccine. Pop star Tom Fletcher and his dance partner Amy Dowden were last night forced to miss the live show after testing positive for Covid-19, although both are known to have been vaccinated.

As the Corporation battles to keep Strictly going, it has cracked down on the media asking questions about the issue. The BBC is also considering a return to last year’s ‘bubble’ system to keep the participants safe – a move that has provoked fury because one half of the pairing would not be able to live with their family and it would affect non-Strictly work.

The BBC is considering a ‘no jab, no job’ rule for some of its programmes to prevent a repeat of the Strictly Come Dancing vaccine chaos. Pictured: Katya Jones and Adam Peaty

With the saga showing no sign of abating, a source told the MoS: ‘There are people in charge of the entertainment output at the BBC who are very stressed out by this whole situation. It has been nothing short of a nightmare.

‘Other BBC shows are now watching the developments on Strictly very closely and those in charge are talking regularly about ensuring that this never, ever happens again.

‘One of the things they are seriously discussing implementing is the “no jab, no job” rule. While it might be too late for Strictly this series, it would make sure that they don’t find themselves in this situation next year.’

The BBC has said on the record that vaccines are a ‘personal choice’ and is taking a series of measures on set to ensure the safety of the crew and participants.

But legal experts suggested that bosses would be entirely justified in asking those who appear on future entertainment shows to demonstrate that they have been jabbed as part of the Corporation’s ‘duty of care’ to others. 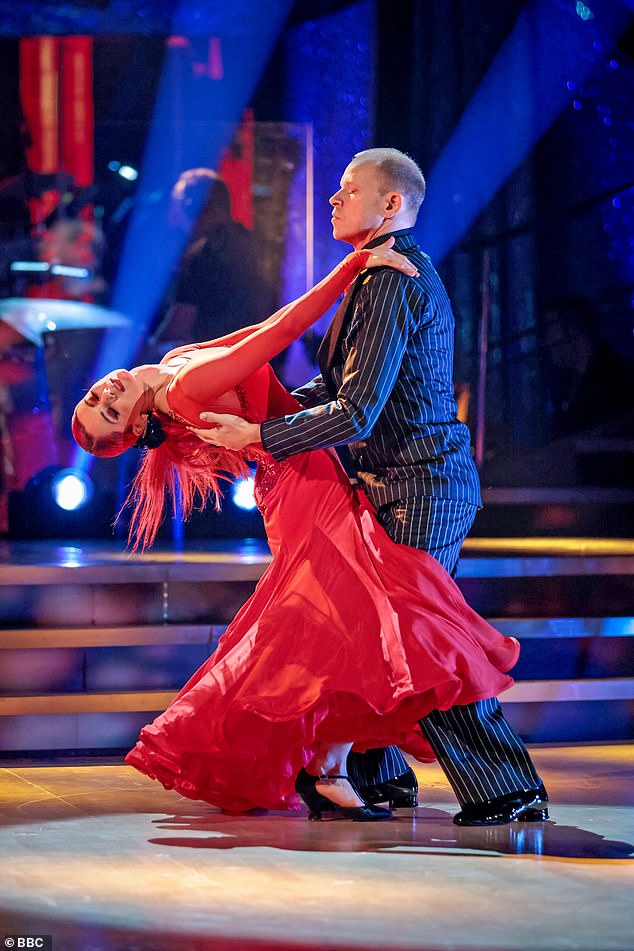 Sources have told The Mail on Sunday that Corporation bosses are becoming ‘very stressed out’ by the scandal and has cracked down on the media asking questions about the issue. Pictured: Diane Buswell and Robert Webb

‘But if there isn’t a good reason for refusing to be vaccinated then they [the BBC] could, mindful of the health of others, insist on those taking part having jabs. In a sense, no jab no jive.

‘If the BBC choose to be liberal, favouring individual choice, then they will balance that against the impact of that decision, say their show being disrupted.’

The MoS last week revealed that two out of the three original dancing refuseniks had instructed lawyers to stop their names being made public, citing privacy laws. One professional dancer has reportedly since had a vaccine.

The unvaccinated dancers are expected to remain in the competition, but there are growing fears that the bubble system could be brought back. ‘The unrest is boiling,’ said one well-placed source on the show. ‘Last year it was understandable as there was no vaccine, but to have to essentially quarantine because a couple of professional dancers won’t have the jab is just so selfish and unfair. If this happens, the talk is that people will start to walk and that really will be curtains for the show.

‘People have been respectful so far. They have stuck to the requests to not discuss the issue in public, but patience is beginning to wear thin.’ On Friday, BBC press officers once again attempted to stop any talk of the jab scandal by telling journalists that a ‘round table’ interview with rugby star Ugo Monye and his partner Oti Mabuse would be terminated if the subject was broached.

At the beginning of the online session, the publicist warned: ‘The questions need to be show-focused and not personal. Asking people their vaccination status is personal and if that is asked, we will wrap it.’ Reigning champion Ms Mabuse has previously publicly confirmed she is vaccinated. 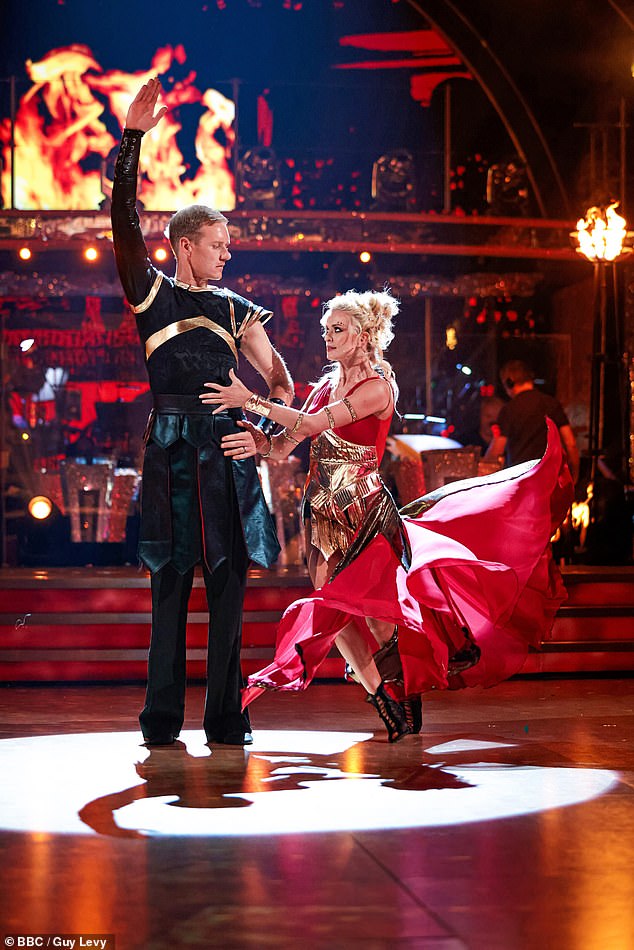 The controversy was sparked when three professional dancers refused the Covid vaccine though one has reportedly since had a vaccine. Pictured: Dan Walker and Nadiya Bychkova

Unbowed, the MoS did ask the dancing partners if there was anything they wanted to say on the vaccination issue, although made clear that we were not asking specifically about their own vaccination status.

Yet the Corporation’s publicist said: ‘Is that what you really want to be the last question?’

Mr Monye said, however, that he was ‘happy to answer it’, adding that he felt the BBC had ‘done their due diligence according to Government guidelines’.

He added: ‘All I can say – and I can’t speak on behalf of Oti or anyone else – is that I feel safe, I feel secure, I feel as if the right protocols and guidelines have taken place so that we can enjoy it to its maximum… I feel really happy.’

The BBC declined to comment on a ‘no jab, no job’ rule, but said: ‘We continue to follow Government and industry guidelines and have in place strict procedures to protect those on the show and the wider production.’

On the issue of bubbles, a spokesperson said: ‘Among the many measures in place on Strictly, the dancers are tested regularly to be in close contact with their partners.’

There has been additional irritation among those involved in the show after McFly singer Tom Fletcher and Amy Dowden announced that they have Covid, yet BBC bosses kept the name of a star who tested positive three weeks ago a secret.

The Beeb refused to reveal the identity of the star, amid speculation that he or she was dancing with one of the three refuseniks. ‘The team are fed up with all this being shrouded in secrecy,’ says a source. ‘The fact that one pairing are happy to come out and say they have it and another dancer doesn’t all seems very suspicious.’

At the end of last night’s live show, the judges combined the votes from this weekend and the previous week, with reality show presenter A.J. Odudu at the top of the leader board and former EastEnders actress Nina Wadia at the bottom.

Public voting also opened last night and one couple will be eliminated today.