Is Chelsea target Wesley Fofana really worth the £80m that Leicester want for him?

After plenty of toing and froing over the price tag, Leicester signed Wesley Fofana for £36.5million from Saint-Etienne on the final day of the 2020 summer transfer window.

There were a few eyebrows raised over the fee as the centre-back was just 19 years old at the time and had only made 20 appearances in Ligue 1.

It was a higher figure than the £27m that Saint-Etienne had received from Arsenal for William Saliba a year previously, a player who had a similar level of experience in domestic football but who had – unlike Fofana – been capped by France at youth level.

But anyone who watched Fofana in his first few months at Leicester, let alone over the course of his whole debut season, quickly realised he was worth it.

Now 21, the defender finds himself facing the same doubts – only with a higher fee and brighter spotlight.

Chelsea have ramped up their interest in him in recent weeks and have seen two bids rejected by Leicester, with the second thought to be worth about £65million. The Foxes will only consider offers in excess of £80million.

Most expensive defenders in history

Not only would that break the world record transfer fee paid for a defender (also received by Leicester, for Harry Maguire in 2019), but it would make Fofana the most expensive player to have never won a senior international cap.

While heed should be taken from how Fofana proved the sceptics wrong two years ago, it is not unfair to ask whether he is really worth such an eye-watering sum.

£80million for a player yet to represent his country at senior level is unheard of and Fofana has still only made 81 career appearances at club level.

The major reason for that is the 21-year-old’s eight-month spell on the sidelines last season with a fractured fibula, which prevented him from reaching a century of games and also set him back in his hopes to make it into Didier Deschamps’ France squad. That is cause for concern in itself as such a serious injury at a young age could be seen as a red flag.

Fofana has targeted a place in France’s World Cup squad in the winter, but Les Bleus are blessed with plenty of centre-back options – many of whom have moved clubs in recent years for significantly less than the fee being touted for the Leicester man. 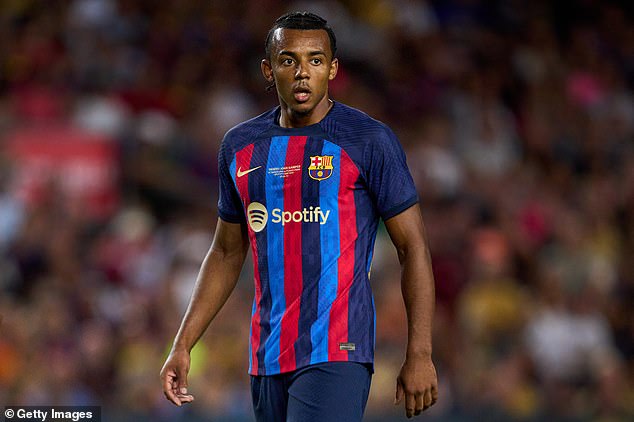 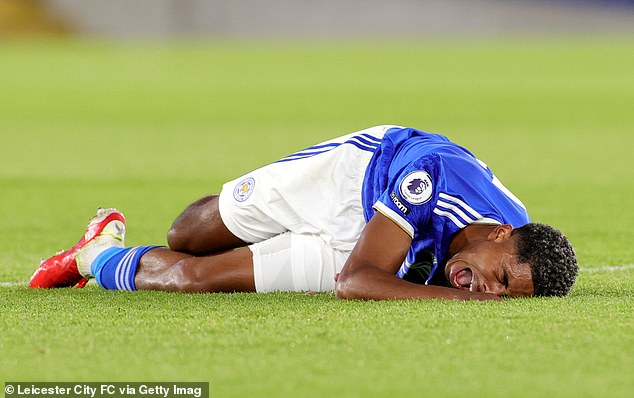 Barcelona signed Jules Kounde for £46million this summer, while Dayot Upamecano (Bayern Munich, £38.5million) and Ibrahima Konate (Liverpool, £40million) were on the move last summer. Meanwhile, as well as Fofana, Chelsea are interested in PSG’s Presnel Kimpembe who is said to be valued at £42million.

While those players are older and more experienced, what Fofana has on his side is potential. If Chelsea do break the bank on him, they are paying for how good he will be in a couple of years’ time.

‘This is a top, top player, no question, at a top level,’ Brendan Rodgers said last season. ‘I’ve worked with lots of top talents who have gone on to become top professionals, but I’ve got absolutely no doubt in this boy.’

That’s not to say that Fofana isn’t ready to play at the very highest level right now. A hybrid of an old-school and modern day defender, the 21-year-old impresses whenever he plays. At 6ft 2in, he is a physical presence, good in the air and a tough tackler, but his positional play is also excellent and he is confident on the ball. 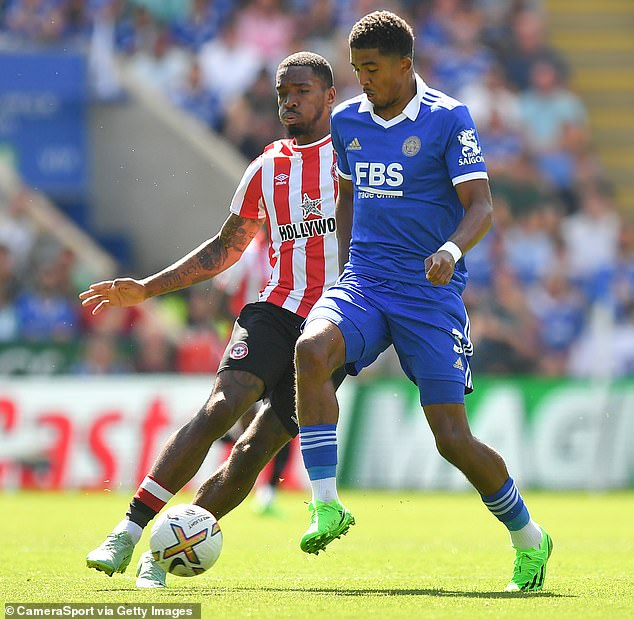 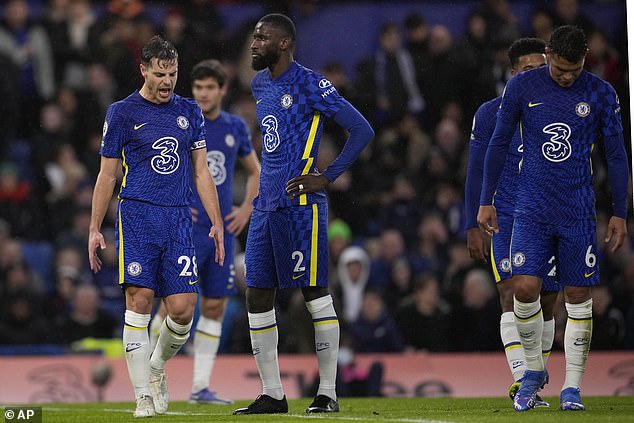 In Fofana’s debut season in the Premier League, Jan Bednarek was the only centre-back to make more interceptions than the youngster (61).

After missing most of last season, the Frenchman wants to win that title this time around. On the first weekend of the new campaign, no player in the Premier League made more interceptions than Fofana’s five against Brentford.

While his raw statistics from 2021-22 are only from a small sample size (seven league games), Fofana ranked higher than Chelsea trio Antonio Rudiger, Andreas Christensen and Thiago Silva for tackles completed, clearances and interceptions per 90 minutes in the Premier League. Only Rudiger had a higher aerial duel success rate. Fofana’s numbers were also better than Kalidou Koulibaly’s in Serie A last season.

It is also worth exploring a wider point about the transfer market here. That is to say that a player is worth as much as the selling club deem them to be worth. Leicester value Fofana incredibly highly, regardless of whether anyone else believes £80million is obscene.

‘Fofana and [James] Maddison are not for sale,’ Rodgers said last week. ‘These are very important players to us. I have close relations with both and speak openly with them. Wesley is a fantastic young guy.’ 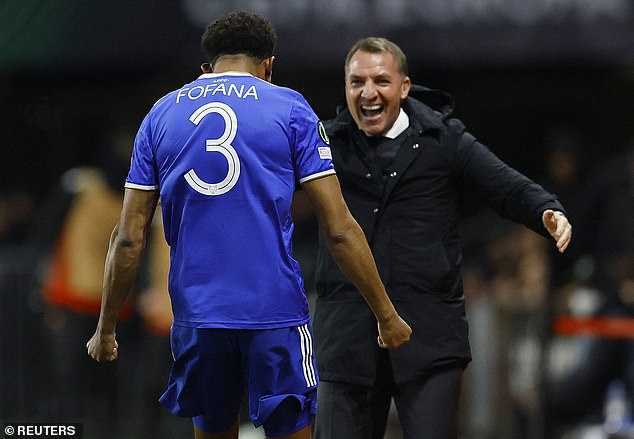 The Foxes believe that Fofana’s value will only increase in the next few years and it was no surprise that in March they tied him down to a contract until 2027.

He is a step above Rodgers’ other centre-back options – which include transfer-listed pair Caglar Soyuncu and Jannik Vestergaard and 34-year-old Jonny Evans – and a replacement who has the same quality and potential would be almost impossible to find with less than three weeks left of the transfer window.

‘It was a massive loss for us because of the nature of how I play, defending forward, anticipating, speed, but also mentality,’ Rodgers said upon the defender’s return.

It is therefore clear that Leicester cannot afford to lose him. They also do not need to sell, despite being keen to decrease the size of their squad in order to bring new players in. 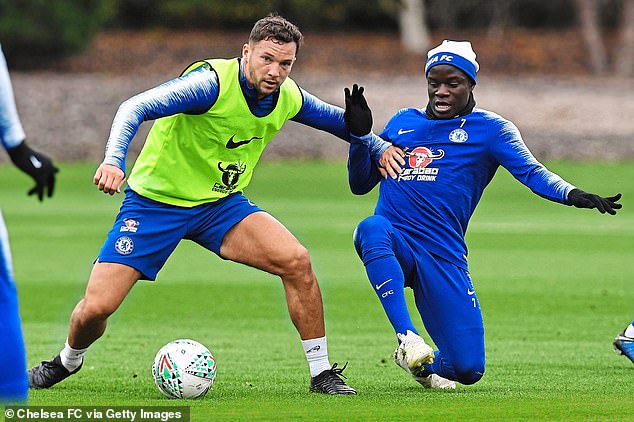 The Foxes have curated a successful business model in recent years where they have made considerable profits from selling players they bought for much less.

Chelsea alone have spent over £110million on N’Golo Kante, Ben Chilwell and Danny Drinkwater, but the fee for Fofana will have to be significant for the two clubs to do business again.

Leicester will point to the £63million fee that the Blues paid for Marc Cucurella last week and suggest that Fofana is worth more than that as he is younger and his potential is higher.

So it is therefore down to Todd Boehly to decide whether he can justify a third big-money defender in his first summer as Chelsea owner. Much like two years ago, a tug of war over Fofana might go right up until deadline day.