Daniel Andrews could be driven from government by his own constituents as voters in the traditional Labor stronghold turn out in force to support his independent rival.

Independent Ian Cook was treated to royal-like status on Thursday as early voters in the Victorian Premier’s traditionally safe seat of Mulgrave arrived to vote.

Situated just across the highway from Mr Andrews’ electoral office, Daily Mail Australia attended the Mulgrave district early voting centre, southeast of Melbourne’s CBD, to conduct its own mini-poll of the masses.

The results indicated a dire outlook for the Premier’s chances of retaining his seat, with not a single person questioned by Daily Mail Australia indicating they would vote for Mr Andrews.

Between 1-3pm, Daily Mail Australia spoke to a random selection of 35 people, of all ages, genders and backgrounds, as they darted in and around of the Noble Park North voting centre – and it makes dire reading for Labor.

And it seems unlike his opponent, the Premier himself wasn’t willing to front up to his constituency voters, dropping his own ballot off early in a different electorate in the city instead – saying he was ‘busy’ on Saturday.

Dan Andrews and his family (pictured voting on Thursday) chose not to submit their ballots in his local constituency, instead opting to do so in the city – unlike his rivals 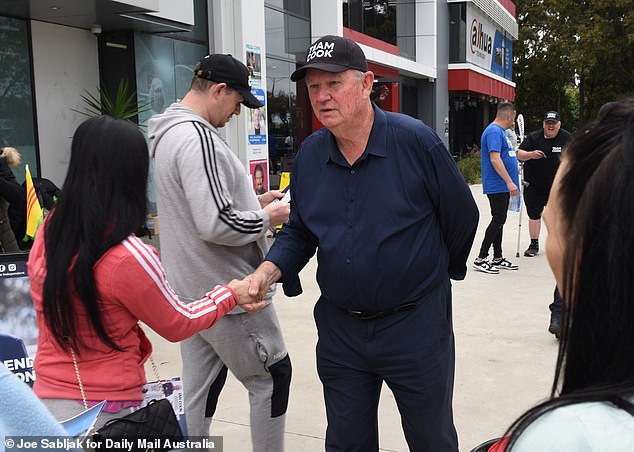 The party is forecast to lose a dozen seats at this Saturday’s Victorian state election – and be forced to rely on the Greens to cling to power.

Betting on Mr Andrews being dumped from his seat offered punters $4 on Mr Cook on Thursday.

‘If you cut off the head of this hydra, what’s left? I’ll tell you what: if the head is cut off on Saturday, and he were to lose his seat, he won’t be staying in Victoria very long at all, I can tell you,’ Mr Kennett said. 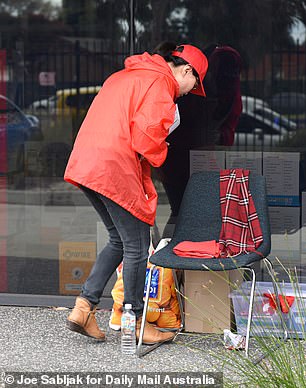 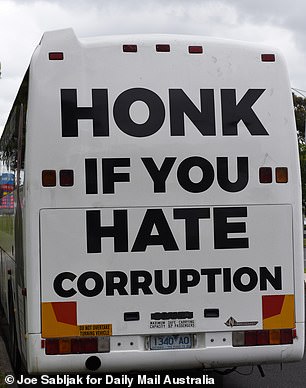 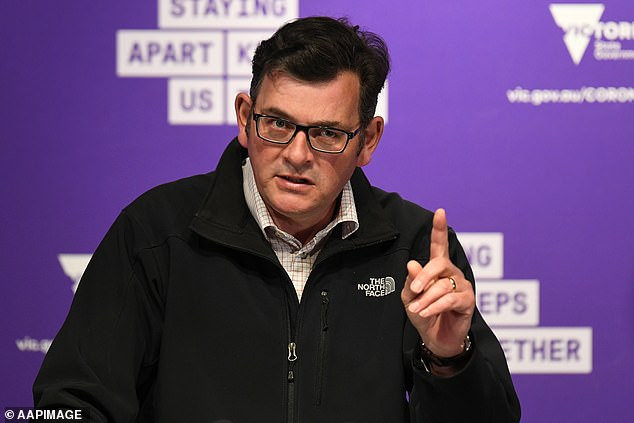 Victorian Premier Dan Andrews as he appeared during Victoria’s six lockdowns. He faces defeat on Saturday

‘He’ll be off overseas so quickly it won’t matter. I think he wants to go to New York. They’ve got good golf courses there, they like the theatre.’

Daily Mail Australia attended the voting centre after reports emerged that with preferences factored in, a sample of 159 voters had Mr Andrews’ main competitor, independent Ian Cook, on a 57.2 per cent lead and the Premier on 42.8 per cent.

On Thursday, the scene outside the voting centre resembled a sea of black caps bearing the name of Mr Cook, who has campaigned off the back of ending corruption.

A bus parked outside the voting centre called on motorists to honk their horn if they agreed.

Mr Cook, 62, had to close down his family-owned catering business I Cook Foods due to the long-running ‘slug gate’ scandal, which began when a Greater Dandenong Council health inspector was accused of planting a slug inside the facility. 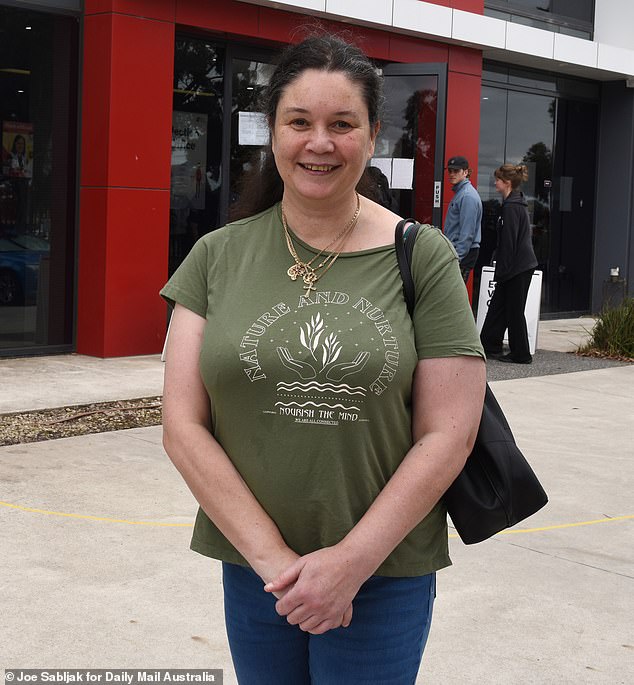 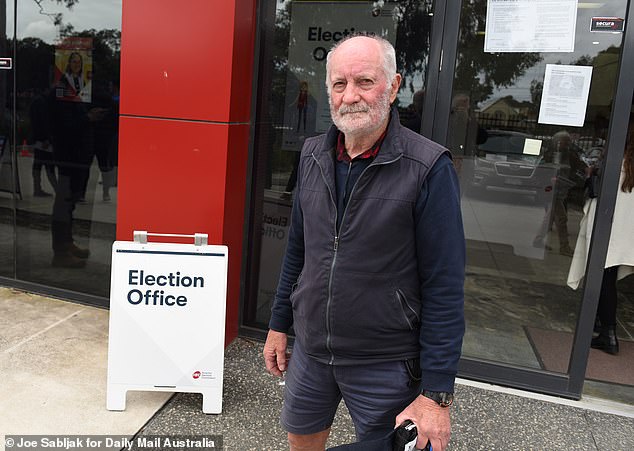 An eclectic mix of voters spoke to Daily Mail Australia about how they voted.

While most didn’t want to be named or pictured, an astonishing number of those spoken to happily shared their opinion.

In short: Dan out. Cook in.

Librarian Tracy Jenkins admitted she had always voted for Mr Andrews until now.

‘I haven’t gone for him this time. I normally do, but I believe there is a strong presence here of another independent. Mr Cook. I met him today and I’m impressed,’ she said.

Standing within the car park outside the centre, Mr Cook quietly greeted every person to walk past him.

He has been there every day since the centre opened on Monday last week.

On the other side of the centre’s door, the only signs of Mr Andrews’ presence came from a couple of volunteers sporting red caps.

Meanwhile, Mr Andrews was voting alongside his family in a city seat away from his own electorate, posting a photo on Facebook before offering an explanation in the comments.

‘Like so many other Victorians, we’ve got a few things happening on Saturday so we voted early and on the way to somewhere else,’ the Premier wrote. 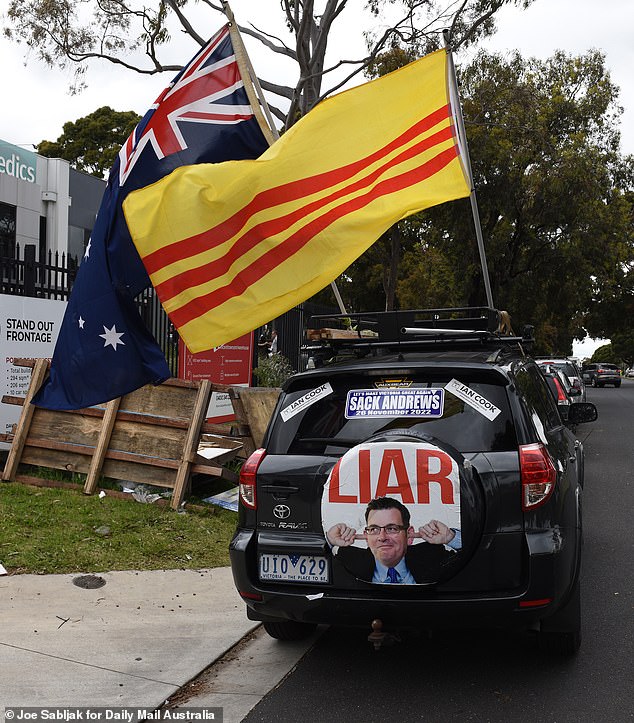 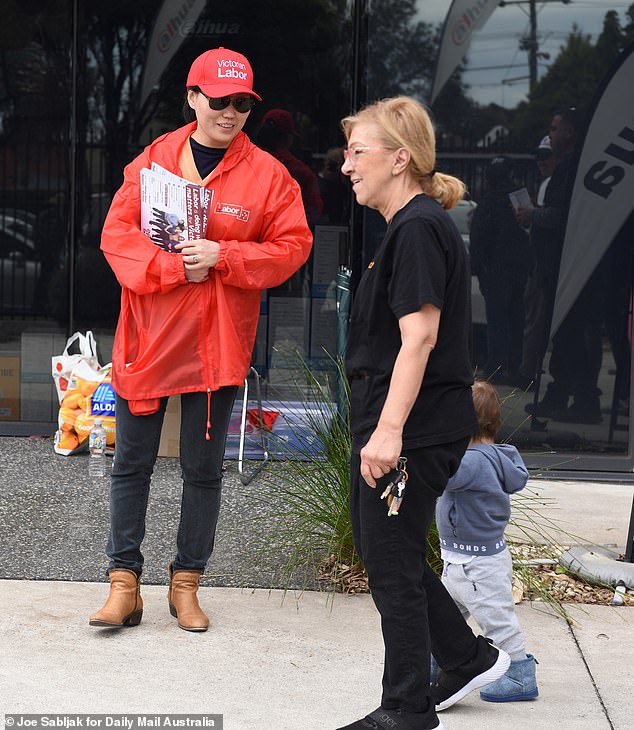 Thursday was the first time his volunteers had worn red, a rival volunteer suggested.

The red shirts scandal, which continues to plague Mr Andrews, refers to a scheme used in the 2014 election when campaign organisers were employed as casual electorate officers.

Mr Andrews’ volunteers refused to be photographed by Daily Mail Australia, ducking their heads and scurrying away when asked.

While the stench of six lockdowns might well be expected to be the obvious blight against Mr Andrews’ name, voters in his own neighbourhood seemingly had numerous other issues with the Premier.

‘I think the policies Mr Cook has to offer are better,’ Ms Jenkins said.

‘I think Daniel Andrews did do a lot of infrastructure in regards to the pandemic and I did think he did do everything going forward, but I think this gentleman needs to have an opportunity in this area. I think it’s time that we had someone new.’

Former salesman John Mitchell, 82, has lived in Mulgrave for 54 years.

So incensed by Mr Andrews’ chances of re-election he erected a sign in his front yard promoting Mr Cook. 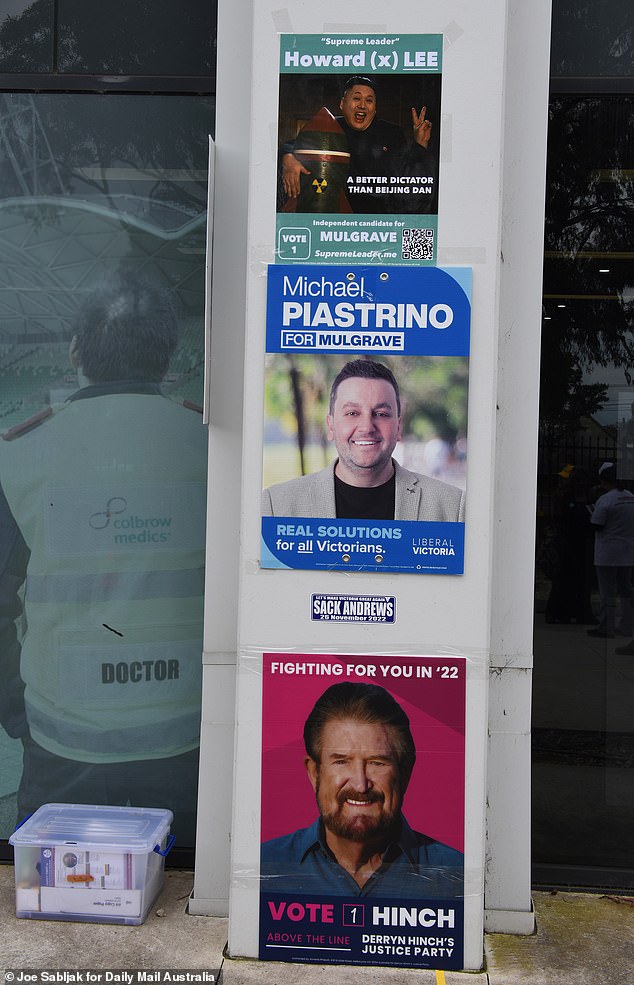 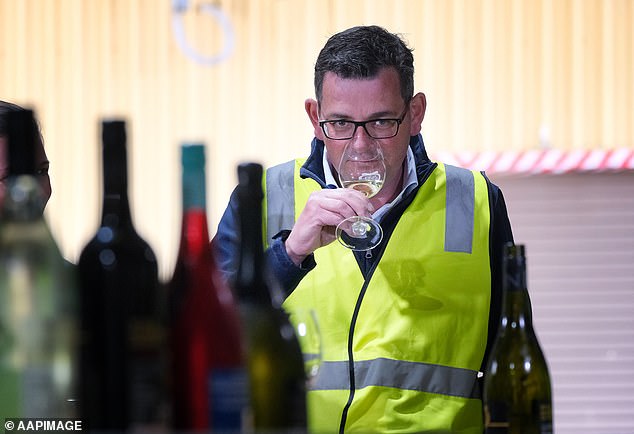 Other candidates running against both Mr Cook and Mr Andrews told Daily Mail Australia they hoped Mr Cook would win (pictured, Dan Andrews during a campaign event at a winery)

HOW THE WHEEL HAS TURNED AGAINST DAN ANDREWS

Independent Ian Cook claims mothers are worried about their children due to the ongoing effects of Mr Andrews’ lockdowns.

‘That issue comes through. Corruption really bites particularly with a lot of the Vietnamese traders,’ he said.

‘I promise you 80 percent of Vietnamese people coming through here are voting for us.’

Mr Cook said stall owners in the local markets are worried about land tax increases, which is seeing rent skyrocket.

The Premier holds Mulgrave in Melbourne’s south-east by a hefty 15.8 per cent margin based on redrawn boundaries.

But Mr Cook believes the boundaries work in his favour.

‘The Greek community is worried about inheritance tax. Labor hasn’t ruled out they won’t do it,’ he said.

‘When you get down to somewhere above Springvale here you’ve got a solid Greek community and they have worked all their lives. They are very family oriented. They don’t want to be leaving stuff to the government to waste, but to their kids to help them get going.’

‘I normally vote Liberal, but I’ve made an exception with Mr Cook. Anything to get this p***k out,’ he said.

‘I put a big sign up in my front yarn and it’s probably the first and last time I’ll do it because I’ve done it for good reasons and you can see looking around here a lot of people feel the same way.’

While lockdown certainly didn’t do Mr Andrews any favours with the voter, it was his involvement with several Independent broad‑based anti‑corruption hearings that really got his goat.

‘He’s a crook. There has been occasion after occasion with the time he’s been in office where anybody else would have honourably stood up and resigned. He has done nothing like that. He’s always buck passing and asking somebody else to take the blame,’ he said.

‘He takes no responsibility and he says anything he likes and then doesn’t follow through – pretends he does. He spends money like there is no tomorrow and our grandkids are going to have an enormous bill to pay off.’

Others, who wished not to be named, said they had gone out of their way to fill in their preferences ‘below the line’ to ensure Mr Andrews did not secure their vote.

On Thursday, other candidates running against both Mr Cook and Mr Andrews told Daily Mail Australia they hoped Mr Cook would win.

It is understood that 11 of the 14 candidates in Mulgrave will steer their preferences to Mr Cook.

In between shaking hands and posing for photographs with strangers, Mr Cook told Daily Mail Australia that he had been humbled by the show of support he had received by the community.

‘All of a sudden it went “bang” and we had 500 people signed-up as volunteers,’ he said. 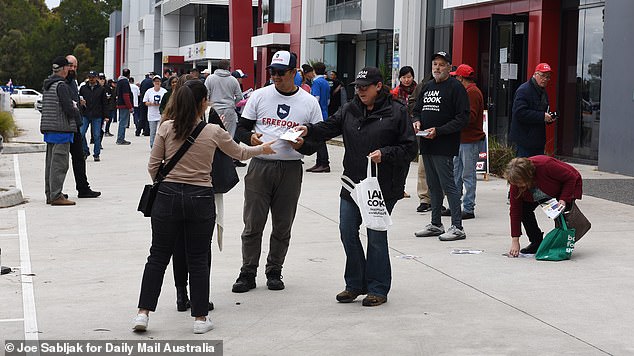 Ian Cook’s supporters flood the voting centre carpark on Thursday (pictured), with other candidates also giving him their seal of approval in the hope of ousting Mr Andrews 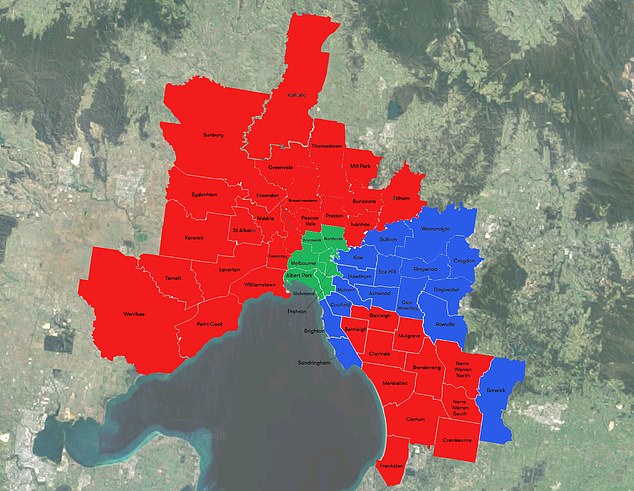 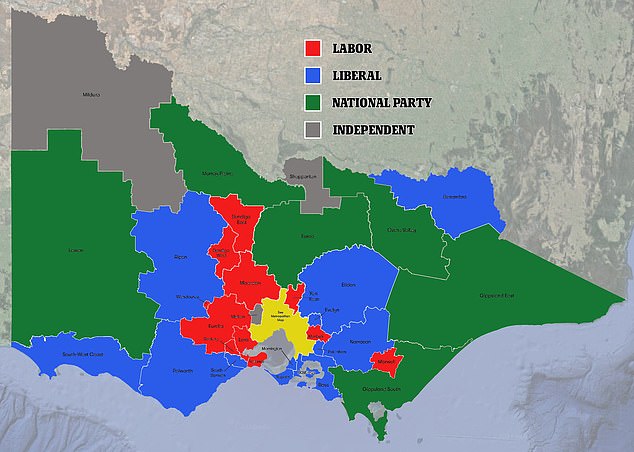 Labor could also potentially lose the sea change seat of South Barwon, near Geelong, along with the Mornington Peninsula seat of Nepean as the safe Labor seat of Melton in Melbourne’s outer west goes to an independent

Mr Cook said he was determined to stand outside the voting centre and speak to as many voters as he possibly could.

Mr Cook said the scene on Thursday was as it had been since the centre opened up last week.

‘The Premier’s supporters are here. You get waves coming through. A couple have had a crack at me, but not many. Usually they just take a brochure and they don’t say a word and hightail it through,’ he said.

‘They don’t want to admit it. They guy had over 50 percent of the primary vote last time and every second person coming through should be saying “I’m going for Dan”, but it is just not happening.’

Mr Cook said said while he would not be so bold as to call the election now, he was in it to win it.

What Daniel Andrews ‘will do if he LOSES the election’

Jeff Kennett, who was Victorian Liberal premier from 1992 to 1999, said that should Mr Andrews lose his own seat, he would be moving to New York.

Mr Kennett, who was Victorian Liberal premier from 1992 to 1999, suggested Mr Andrews could replace former NSW Liberal premier Nick Greiner as Australia’s consul-general in New York, even though he was only appointed last year by former prime minister Scott Morrison’s government.

‘We’ll make a small wager: if he were to lose his seat, I think you’ll find he’ll be off to New York very quickly,’ he said on Thursday.

‘It’s a very nice posting – at the moment Nick Greiner’s there.

‘His term must be coming to an end soon so there you are.’

An exit poll on Mulgrave showed independent challenger Ian Cook leading Mr Andrews, 57.2 per cent to 42.8 per cent, based on a small sample size of 159 voters.

It was commissioned by Mr Cook, who is suing Victoria’s Department of Health and Human Services and Greater Dandenong Council for $50million after his catering business I Cook Foods was shut down in 2019.

A health inspector had linked food from his premises to a fatal listeria case in a private hospital but Mr Cook has alleged a slug was planted, claiming the inspector was caught on camera.

The local council and the state government ran a rival operation supplying foods to hospitals.

‘So out in Mulgrave, there’s a whole lot of business people and they are supporting Ian Cook in droves.’