EXCLUSIVE: Is this a sign Nick Kyrgios will take on Bernard Tomic for $2million? Star is caught practising on grass after his rival offered to play him on the surface as bad boys’ feud goes ballistic

Nick Kyrgios has been spotted training on a grass tennis court in Sydney in the wake of rival Bernard Tomic’s challenge to take part in a winner-takes-all showdown worth $2 million.

Footage obtained exclusively by Daily Mail Australia shows Kyrgios having a hit at the Hunters Hill Tennis Club on the city’s lower north shore, which is a grass turf tennis court – a rarity in Sydney and all over the world, with most courts now synthetic.

After the feud between the pair escalated even further earlier in the week, Tomic challenged Kyrgios to play off on a grass court, with each stumping up $1 million to find out who really is the better player.

This is why footage of him playing on a grass court on Friday is very intriguing.

Tomic chose grass because he wanted to make sure if they do take each other on, Kyrgios wouldn’t have any excuses.

‘Put your money where your mouth is or accept that I’m better than you, full stop,’ the 29-year-old told the Gold Coast Bulletin.

‘I’ve beaten you easy before and I’ll do it again. Plus we’ll play on grass so you don’t make any excuses,’ said Tomic.

The feud between the former friends continues to escalate, with Tomic referencing his long-finished, albeit successful, junior career as to why he was the better player earlier this week.

Kyrgios returned serve on Instagram, laughing at the suggestion.

‘Bernard, I didn’t realise it was this bad. I low key feel bad now,’ Kyrgios posted on his story, highlighting Tomic’s ranking, which is 418th while ‘King Kyrgios’ sits at 76.

‘Hit me up if you need me to help you remember how to play. Geezus. Let’s not forget the time I payed for your flight home from Shanghai because you had no money.’

There is no doubt a $2million showdown between two of Australia’s most controversial sports stars would be a spectacular success and widely viewed.

Both players have a very healthy amount of talent and ego, even if their application to professional tennis isn’t what it probably should be.

The ATP website shows Tomic’s career earnings sit at $8,814,343 with Kyrgios raking in $13,369,428, (both AUD) though of course this doesn’t include the substantial endorsement deals both have had throughout their careers.

It’s still safe to say neither would mind an extra $2million to buy another Lamborghini or Tesla, though. Never mind the huge amount of corporate dollars a showdown would produce. 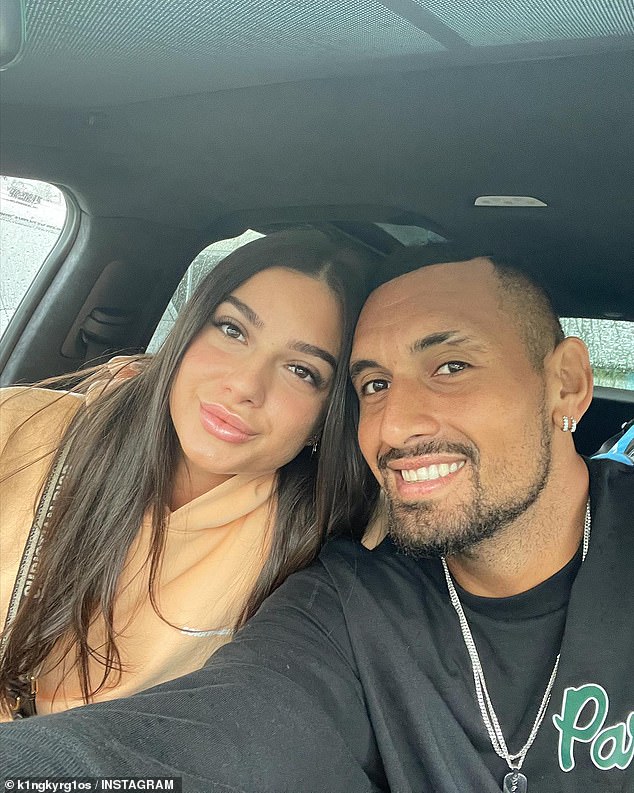 Kyrgios with girlfriend Costeen. The pair are very active and loved up on social media

Kyrgios, along with girlfriend Costeen Hatzi, has found himself in the headlines a lot of late, being shamed for his parking etiquette, hinting at a wedding and racking up the fines on the tennis court for umpire abuse and racquet smashing, amongst other things.

His rival Tomic is currently overseas plying his trade in the Challenger tour, which is one rung below the ATP. He is yet to make it past the second round in a tournament in 2022.