Is health food better for you if it’s shop-bought or homemade?

The demand for healthier choices, such as non-dairy milks and vegan meat alternatives, is huge — and growing.

But supermarket versions aren’t the only option, as some are surprisingly easy and cheap to make in your own kitchen.

But which is better for you?

Here, dietitian Helen Bond shows how you can make nine health foods at home, and compares their nutritional value with the shop-bought version.

Supermarket versions aren’t the only option, as some are surprisingly easy and cheap to make in your own kitchen 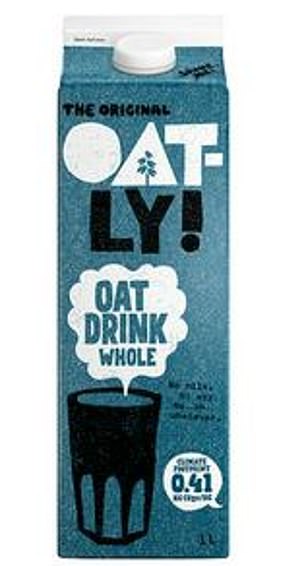 How to make your own: To make 500ml, cover 65g rolled oats in water and leave to soak for 30 minutes.

Discard the water and rinse the soaked oats through a sieve. Put them into a blender and add 500ml cold water. Blend until smooth. Pour through a piece of muslin (or a tea towel). This keeps in the fridge for four days.

How they compare: Manufacturers often add enzymes to oat milks, which break down some of the carbohydrates in oats into their constituent sugars. So a latte made with 200ml of this shop-bought oat milk contains the equivalent of 2 tsp of sugar.

Without the enzyme treatment, homemade oat milk tastes less sweet and less creamy, but is more suitable for those with diabetes and others who must watch their blood sugar levels.

However, an advantage of the shop-bought variety is that it is fortified with calcium and vitamin D, needed for bone health; vitamin B12 for a healthy nervous system; and iodine, for making the thyroid hormones that control your metabolism.

If you’re vegan, you may not get sufficient levels of these from your diet, so buying fortified oat milk is the better choice.

How to make your own: For a litre jar, chop 400g Chinese leaf or other white cabbage into a bowl and add 1 tbsp salt, then set aside for an hour.

Blend to form a paste. Slice two carrots, four spring onions and eight radishes into fine strips and mix into the paste. 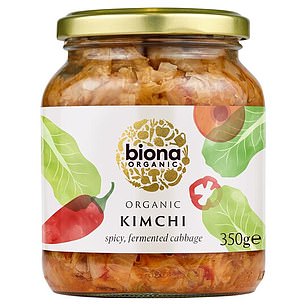 Rinse and pat dry the wilted Chinese leaf, then add to the mixture. Pack into a jar, seal and leave to ferment at room temperature for a day, before transferring to the fridge. This will keep there for several weeks.

How they compare: The fermentation process that occurs when making kimchi (both shop-bought and homemade) produces lactic acid. This nourishes the gut microbiome, the population of bacteria in our guts that is linked to good health.

However, commercial, jarred kimchi is heat-treated, which kills the probiotic (or beneficial) bacteria. In homemade kimchi or shop-bought versions from the chiller, the probiotics are still alive, giving it the edge.

On the plus side, neither has added sugar and both would provide one of your five-a-day with each 80g serving.

But both are similarly high in salt, with almost a quarter of your daily limit per serving. 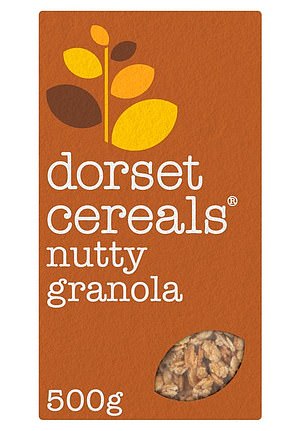 Spread this out on a baking tray and put in the oven at 170c/150c fan/gas 4 for 30 minutes, or until golden. The granola keeps for around four weeks in an airtight container.

How they compare: A 45g serving of this homemade granola contains around ¼ tsp of sugar, compared with 11/3 tsp in the shop-bought version, which has golden syrup as the second ingredient.

Homemade is higher in gut-healthy fibre, too, with 15 per cent of your recommended daily intake in each bowl. The same portion of the shop-bought granola has 11 per cent.

The homemade version contains more than twice the quantity of nuts and seeds than the shop-bought one, so it is 10 per cent higher in calories.

However, these will provide ‘good’ fats. Eating the homemade granola for breakfast with natural yoghurt and berries is a good start to the day, providing around 400 calories.

How to make your own: Heat a litre of whole milk in a pan until it reaches 82c.

Remove from heat and, when the temperature has dropped to 46c, add 2 tbsp of shop-bought natural yoghurt; this will act as the culture for your homemade batch. 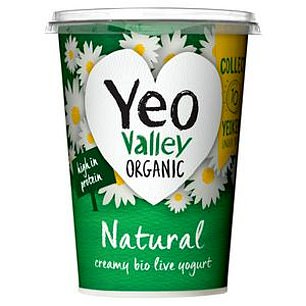 Pour into a screw-top jar and keep in a warm place for 12 hours. Refrigerate the yoghurt for at least three hours before eating and use within a week.

How they compare: Using shop-bought natural yoghurt as a starter culture means your homemade yoghurt will be nutritionally identical (choose a yoghurt with Bifidobacterium and Lactobacillus cultures to maximise the benefit to your gut health).

In a 125g serving, both will supply around a fifth of your daily calcium needs for strong bones and teeth, along with 5.3g protein (a tenth of your recommended daily intake).

Using skimmed milk would lower the calorie content by a third, but research suggests the saturated fat in whole milk doesn’t raise your cholesterol levels. 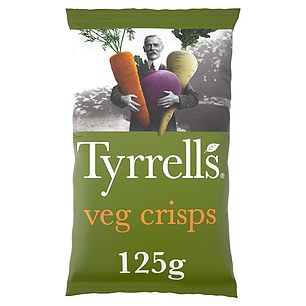 How to make your own: To make three servings, cut 300g of mixed root veg (e.g. sweet potato, parsnip and beetroot) into thin slices.

Pat the vegetables dry, then mix with 2 tbsp olive oil and black pepper. Bake on an oiled tray at 210c/190c fan/gas 6 for 20 minutes, or until crispy. Eat the same day.

How they compare: By baking and not frying, as manufacturers do commercially, you cut the calories by almost half (two large handfuls of these contain 88 calories, compared with around 167 in the shop-bought).

Deep-fried foods don’t generally count towards your five-a-day, but a serving of the homemade crisps can.

For extra fibre, keep the skin on the root veg. 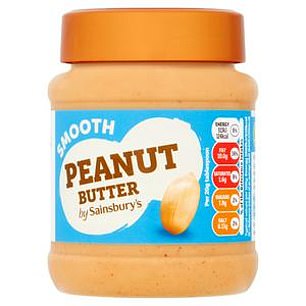 How to make your own: To make a 300g jar, take 300g raw, skin-on peanuts, toast in a medium oven for ten minutes, then put into a food processor.

Blend for several minutes, or until it turns to butter. Stop the motor regularly, scraping down the sides as you go.

How they compare: Homemade peanut butter made simply with peanuts and no salt is just a little healthier than a shop-bought one with added salt, sugar and palm oil, as these other ingredients make up less than 5 per cent of the commercial stuff.

In fact, a tablespoon of shop-bought peanut butter typically has less than 2 per cent of your daily limit of salt.

That said, when you make your own you can add fibre (1.7g versus 1.3g per tablespoon) and antioxidants by using peanuts with the skins on. 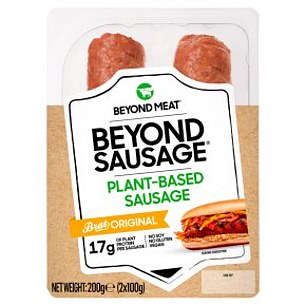 Mix into a dough with 150g wheat gluten (available in health food shops).

Form into sausages, rolling up each in parchment paper and then foil, twisting the ends of each one into a Christmas cracker shape. Steam for 20 minutes over boiling water and serve as is, or brown during a flash fry in vegetable oil.

How they compare: The shop-bought option has the edge for fibre content, as they’re made with fibre-rich pea protein — one sausage has a tenth of your daily intake, versus a third less in the homemade ones. But the homemade version has a higher protein content (with more than half your daily needs) from wheat protein, and barely a trace of saturated fat.

Each Beyond sausage has more than a third of your daily saturated fat limit thanks to coconut oil. There’s also less salt in the homemade version, though both have more than one sixth of your daily limit per sausage.

Nutritional yeast in the homemade version also adds several B vitamins, which are important for energy release — levels of which would otherwise be lower compared with a meat sausage — and these have not been added to the shop-bought vegan sausages. 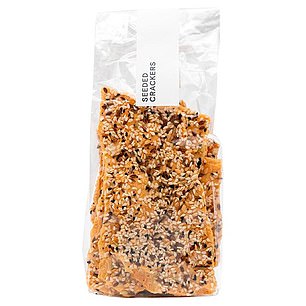 How to make your own: Stir together 150g large seeds (such as pumpkin and sunflower) with 40g smaller ones (sesame, poppy, chia). Stir in 1 tbsp of reduced salt soy sauce and 1 tbsp of rapeseed or olive oil.

Add one egg white, beaten until frothy with 3 tbsp water. Stand for a few minutes until the water is absorbed, then press the mixture onto a baking tray to a thickness of 0.5cm. Cook at 180c/160c fan/gas 4 for around 15 minutes until the seeds are golden. Cut or break into ten crackers.

How they compare: The homemade crackers are around 90 per cent seeds (compared with 27 per cent in the shop-bought ones, which have wheat flour as the main ingredient).

It means you’ll get more calories in the home-baked ones (about 118 versus 79 per 20g cracker), but also more filling protein, vitamin E, magnesium (important for energy release and healthy nerves), and ‘good’ fats. The homemade ones are also lower in salt, though neither supply a significant amount if you only have one or two. 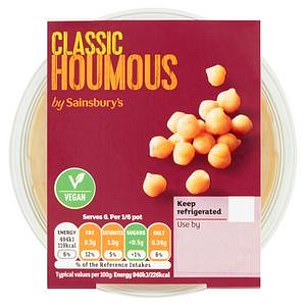 How to make your own: To make around 400g, drain a 400g can of chickpeas in water, reserving the fluid in a bowl.

Whizz the chickpeas in a blender with 1 tbsp of tahini, 100g fat-free natural yoghurt, a pinch of cumin and a garlic clove.

Add some of the chickpea water and lemon juice to achieve the taste and texture desired.

How they compare: The shop-bought hummus contains rapeseed oil (high in healthier monounsaturated fats, but also adds calories), replaced in the homemade version with fat-free yoghurt for a more waistline-friendly, but still creamy, option.

Both contain tahini, which is made from sesame seeds and is high in calcium. You can expect a 100g serving (2 tbsp) of either hummus to provide at least an eighth of your daily calcium requirement, needed for strong bones.

But homemade hummus is the better choice for people watching their blood pressure; shop-bought hummus tends to be high in salt, with more than 10 per cent of your daily limit in a serving.