Is it cruel to bring animals on a plane as ’emotional support’?

The Department of Transportation has been considering new guidelines for flying with emotional support animals since spring 2018, but it doesn’t look like those guidelines will be ready in time for the holiday travel season.

No one knows whether the new guidelines could have helped recent Delta Air Lines passenger Matthew Meehan, who claimed that he had to sit in doggie poop from an emotional support animal on a November 1, 2018 flight from Atlanta to Miami. The dog became sick on a previous flight, the airline reported, leaving the mess for Meehan.

And that was after Delta tightened its rules for flying with emotional support animals.

As an assistant clinical professor of veterinary medicine and veterinary behaviorist, I have experience in small animal care and animal behavior, and I am concerned about the welfare of animals on planes as well as the humans. The issues are more complicated than many imagine.

In recent years, the number of animals flying in the cabin on airplanes has increased exponentially, due to an increase of these emotional support animals

Stressed out by flying? Aren’t we all

Oscar Munoz, CEO of United Airlines, told a business group that the situation aboard has become so ludicrous that his airline was expected to fly a support animal for an emotional support animal.

Last year, United drew a line in the sky when a passenger wanted to fly with an emotional support peacock.

For American Airlines, the last straw was a goat (miniature horses are still allowed). American issued new guidelines in July that also restrict support animals from occupying a seat or nibbling food from a tray table. There’s no mention about whether they can drink on board. Pet owners, however, claim that it is discriminatory to deny them the comfort of emotional support animals.

The DOT and other government agencies have been exploring a revision in the laws. These stricter proposals have received revision requests and support from both the American Veterinary Medical Association and the Association of Flight Attendants-CWA Union.

The American Veterinary Medical Association pushed back on language, however, that would have made its members accountable for verifying that an animal will behave, because there is no way to guarantee the behavior of an animal.

This all took off when the 1986 federal Air Carrier Access Act allowed people with mental health disabilities to fly on a plane with an animal free of charge, if it alleviates the person’s condition.

Over the years, however, airlines have said that some animal-carrying passengers abuse the rules so they can simply fly with their pets for free. Some want to prevent their pets from flying in cargo, where some pets have died.

Many passengers traveling without animals have said they are stressed by emotional support animals. Animals trigger phobias in some people and allergies in others; about 10 percent of the human population is allergic to animals. Cats bear most of the blame, but proteins in dog dander and even saliva can cause an allergic reaction.

Many airlines now require advance notification. Many also want a diagnosis letter for the human stating that the person is psychologically disabled and can not be without the stability provided by that pet. Writing such a letter can pose risks and ethical dilemmas for psychologists, however, a study suggested. Nonetheless, people seeking a letter can usually obtain one online.

The airline industry also considered asking for documentation from a veterinarian that the animal can behave in public and that it is healthy and has been vaccinated. The American Veterinary Medical Association emphasized to the DOT that veterinarians cannot vouch for animals’ behavior and that expanding the scope of the veterinary form could lead to refusals by veterinarians to fill out these forms. That, in turn, could result in certified service animals being denied air transportation.

The airlines dropped that requirement. Instead, many airlines ask that the animal just be clean and not have an odor. 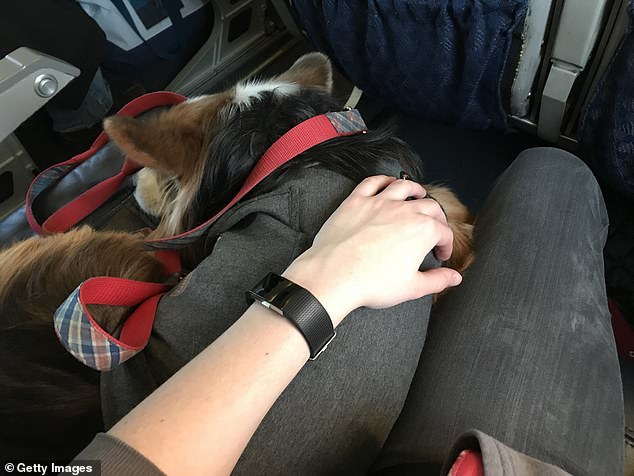 Riding on planes, being in closed-in spaces, and being exposed to loud noises and crowds of people can be overstimulating and scary to an animal, especially one not accustomed to that particular environment

There’s a lot of scientific evidence that being in close proximity to, and living with, companion animals has many psychological and physiological benefits for humans. In children, animal-assisted therapy has been shown to reduce pain perception and provide better coping skills in the hospital environment. Another study found that in children with autism, social behaviors increased in the presence of animals compared to toys.

Studies also have shown a positive effect of service dogs on war veterans and people with traumatic brain injuries.

According to a 2016 literature review by two psychologists and a psychology graduate student, the answer is no. There is little evidence to support that emotional support animals are more effective than traditional pets.

In fact, there are no specific guidelines or standards for evaluating emotional support animals. And, without standards, legal protection is complicated when incidents occur, such as when a pit bull bites a person, as one did on a Delta Air Lines flight, leading the airline to ban that breed.

There’s also evidence that the animals themselves may not fare so well. Riding on planes, being in closed-in spaces, and being exposed to loud noises and crowds of people can be overstimulating and scary to an animal, especially one not accustomed to that particular environment.

In a 2002 study, researchers looked at air travel in beagles. They found that blood and salivary cortisol was much higher than baseline in dogs during air transport, an indication they were stressed. The authors noted that just because the beagles were mainly inactive during transport did not mean they were not stressed. Rather, their behavior indicated that the beagles adopted a conservative-withdrawal approach in response to their stress, rather than fight-or-flight.

In contrast, service dogs are often genetically selected and extensively trained for the tasks they will perform. They need consistent and predictable behaviors in a wide range of situations and environments in order to safely provide service to their humans, especially if a life depends on that particular service.

Training, training methods, the trainer and training tools used can also have a significant effect on behavior and coping skills in animals.

And, whenever an animal is fearful or anxious, he may be more likely to choose an aggression strategy, such as growling, snapping or biting, especially if he feels cornered or trapped. In the end, airlines and regulators are left to develop ways to avoid the downsides of comfort animals, even as consumers have come to expect this accommodation.