Is it ever okay to discipline another child?

Picture this. You’re with your child at the playground and watch another child push your daughter and snatch her toy away.

It’s an age old dilemma for parents. While you do your best to teach your child values and good behaviour, it can be frustrating to see other children act up without punishment.

When you see other peoples’ children behaving badly in the playground, is it socially acceptable to intervene and discipline the child? (stock photo)

But is it socially acceptable to step in and discipline another person’s child? It’s difficult to know where the boundaries lie.

The issue captivated Australia’s imagination in Christos Tsiolkas’ book ‘The Slap’ about a backyard barbecue where a man slaps a child who is not his own and is a constant question on parents’ minds.

So how do we know where to draw the line?

Dr Justin Coulson is one of Australia’s leading parenting experts and Honorary Fellow at the Centre for Positive Psychology in the Graduate School of Education at the University of Melbourne.

He shared his advice about this situation on the Today Show. He discussed how society generally sees discipline as a harsh, punitive measure.

‘It’s really important that we intervene, but the question of discipline comes down to definitions and I don’t want to get too academic,’ he said.

‘I don’t think that any of us want somebody else to hurt our child,’ he said. 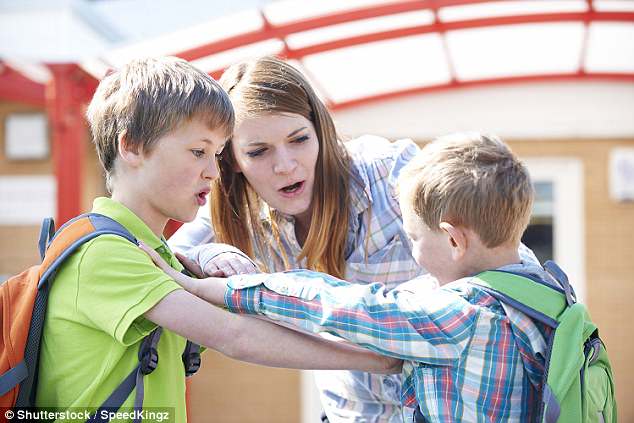 ‘If you look at what discipline actually means, you look up the etymology of the word, where it came from, it comes from the word ‘disciple’, which means to teach, or to guide, or to instruct,’ said Parenting expert Dr Justin Coulson (stock photo)

However, Dr Coulson said discipline is a way to positively guide behaviour.

‘But if you look at what discipline actually means, you look up the etymology of the word, where it came from, it comes from the word ‘disciple’, which means to teach, or to guide, or to instruct,’ he said.

In a move that is sure to ruffle some feathers, Dr Coulson expressed his opinion that people have a duty to correct all children’s behaviour in a positive, constructive manner.

‘Every single one of us has a social requirement to intervene, and to teach, to guide and to instruct. Whether it’s our children, or somebody else’s. We’ve got a social obligation to do that,’ said Dr Coulson.