Is it REALLY the first day of spring?

Britain will emerge from winter’s long, icy grip this week as ‘significant’ warming delivers temperatures as mild as the South of France.

After a ‘Mini Beast from the East’ brought widespread snowfall and temperatures down to -10C (13F) over the weekend, the mercury is expected to climb to 12C (54F) on Thursday – hotter than 11C (52F) Marseille.

As astronomical spring gets underway today, the Met Office say spells of sunshine will feel pleasantly spring-like, although meteorologists are warning of wet and windy weather from Friday to Sunday.

And, looking further ahead to Easter, the Met Office is forecasting a ‘greater than normal chance of snow’ in the North – along with a ‘spell of colder than average weather, with increased likelihood of overnight frosts’.

Three-year-old girl Ava Rowney picks daffodils in a field on the first day of spring today in Spalding, Lincolnshire 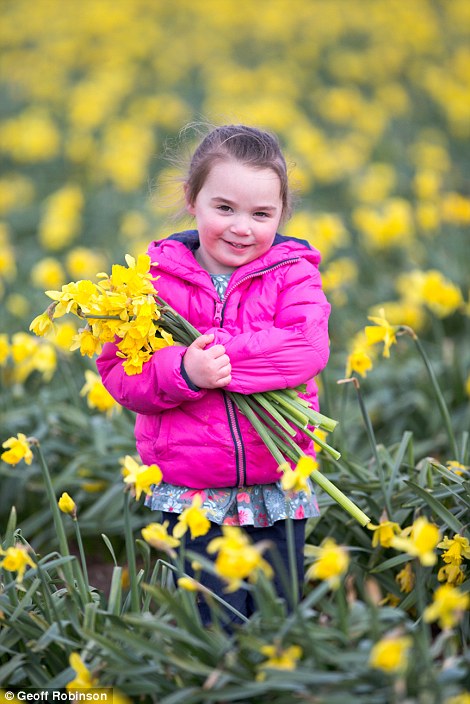 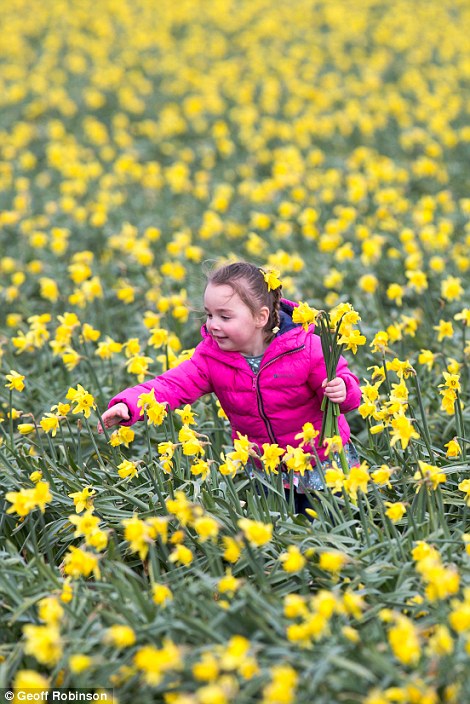 The daffodils in Spalding, Lincolnshire, are said to be four weeks late in flowering this year due to the recent cold weather 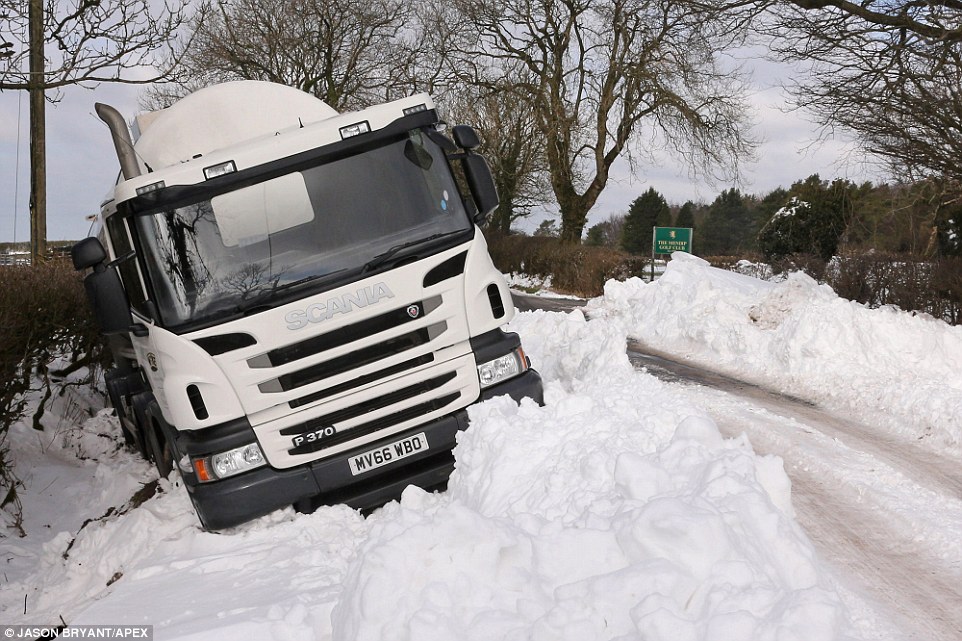 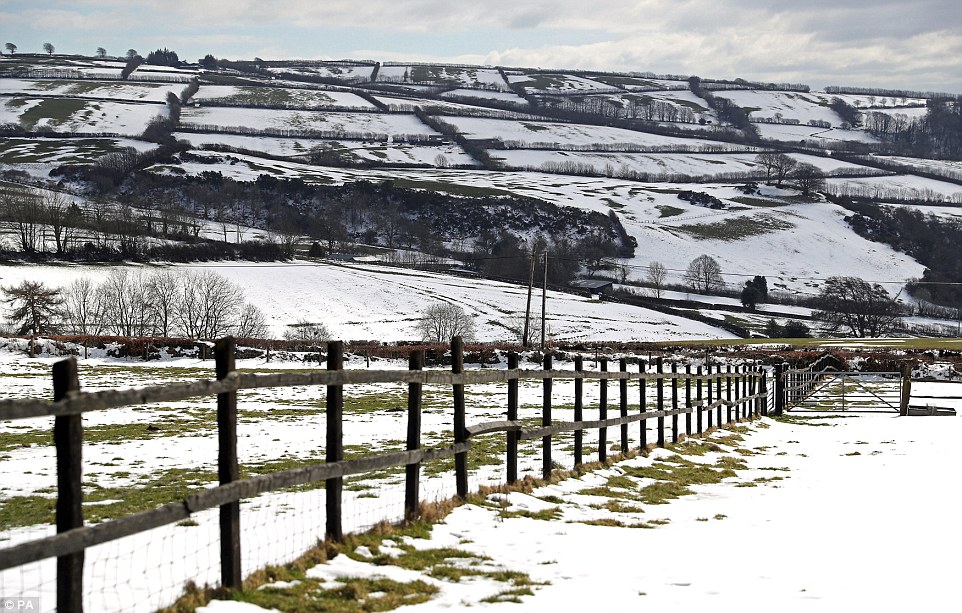 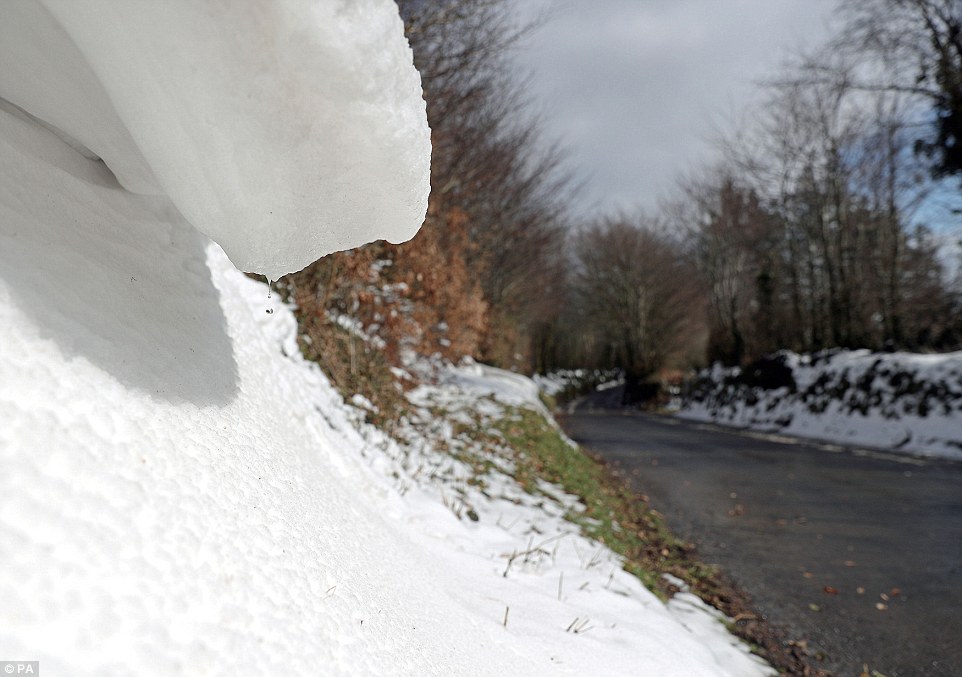 Snow begins to melt near Cutcombe in Exmoor national park today, on the start of astronomical spring in Britain 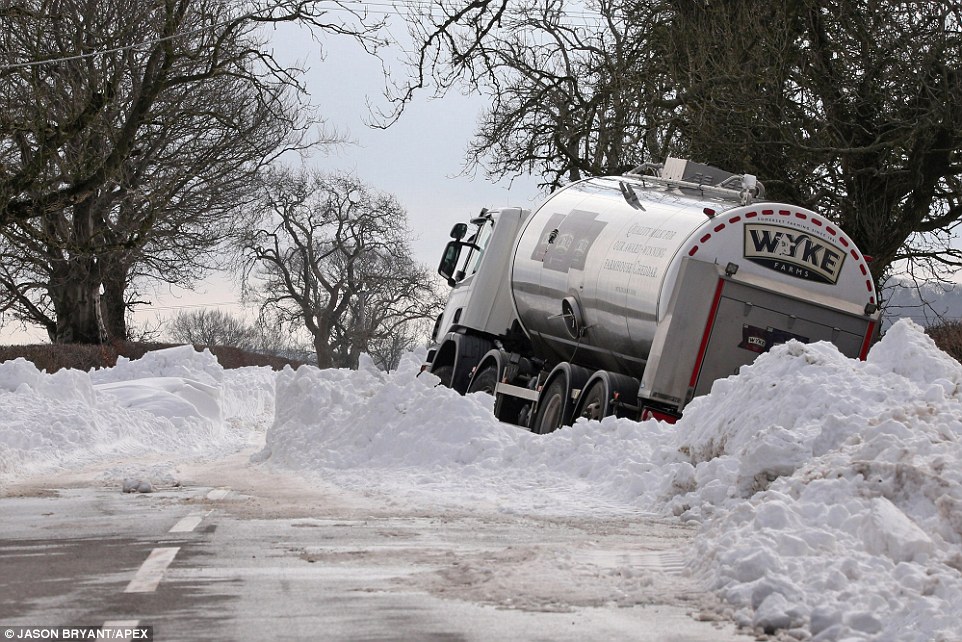 Forecaster Martin Bowles said: ‘It will be significantly milder and the snow will thaw rapidly. Temperatures will be much closer to normal for this time of year, and it will finally start to feel Spring-like with sunny spells for most.

‘Friday will be wet and windy across the country, and it may feel slightly cooler. Saturday and Sunday look similar, with rain showers for most. There could even be some gale-force winds. But on the whole, we will see a very noticeable improvement in the temperatures.’

While meteorological spring began on March 1, astronomical spring started today. The milder weather comes after as much as 6in (14cm) of snow and ice wreaked havoc across the country yesterday and over the weekend.

Snow drifts in some areas are likely to have been much deeper. More than 700 schools in Wales, Somerset, Devon and Cornwall were closed yesterday, flights were cancelled and rural communities cut off.

The worst disruption was in the West Country, where blizzards and 4ft snow drifts forced police to close 65 miles of the A30 from Exeter to Bodmin on Sunday night. Some 82 people, including children and babies, had to be rescued by troops in 4x4s, with many spending a freezing night in a school in Okehampon.

‘Beast from the East’ could be linked to solar cycle

Periods of extreme winter weather like the ‘Beast from the East’ could be linked to the solar cycle, research has suggested.

The study revealed that when the solar cycle is in its ‘weaker’ phase, there are warm spells across the Arctic in winter and heavy snowfall across the Eurasian sector.

Scientists observed that during periods when the winter solar sunspot number (SSN) falls below average, the Arctic warming extends from the lower troposphere to high up in the upper stratosphere.

On the other hand, there is a cooling when the SSN is above average.

Dr Indrani Roy, from the University of Exeter, said: ‘In spite of all other influences and complexities, it is still possible to segregate a strong influence from the sun.

‘There are reductions of sea ice in the Arctic and a growth in the Eurasian sector is observed in recent winters.

‘This study shows those trends are related and current weaker solar cycle is contributing to that.’

The research explored how the 11-year solar cycle – a periodic change in the sun’s activity including changes in the levels of solar UV radiation and changes in the SSN – can be linked with the polar vortex and Arctic oscillation phenomenon, which affects winter Arctic and Eurasian climate.

It can subsequently influence weather conditions in Europe and Asia.

Those rescued included newlyweds Sara and John Lund. They spent their wedding night in the emergency rest centre after becoming trapped by snow on their way to a honeymoon in Cornwall.

Yesterday, towns and villages including Ilfracombe, Lynton, Lynmouth and Combe Martin were effectively cut off by the snow for the second time in a month.

Police in Devon criticised motorists who abandoned their vehicles after heading out on non-essential journeys, saying they had ‘added to the disruption’. Two officers said they spent 90 minutes digging their Land Rover Defender out of a snow drift.

There were fresh fears of a water shortage as residents in Tavistock, Devon, were asked to ration water after a burst main caused flooding and supply problems.

In the Lake District, a climber died on Saturday after he slipped on sheet ice beneath fresh snow and plunged 200ft from the summit of Helvellyn in Cumbria.

In Oxford yesterday, a 40-tonne juggernaut lorry skidded on ice and ploughed off a road bridge on the city’s Eastern Bypass. Police said it was a ‘miracle’ no one was killed.

Meanwhile, at least 15 people had to be evacuated from 13 bungalows on a cliff top at Hemsby, Norfolk, after powerful winds and surging seas caused rapid erosion.

An emergency operation was launched over the weekend as a number of structures plunged over the edge, including a shed, tank and a wooden fence. All but four of Devon’s 307 schools were closed yesterday, along with 97 in Cornwall, 163 in Somerset and 171 in Wales.

The cold weather also forced the cancellation of dozens of flights yesterday, but most airports were running as normal by the end of the day.

A yellow weather warning for ice was in place until 9am today. The alert covered the entirety of England and Wales except for a small part of East Anglia and the East Coast. Forecasters expect the risk of ice to be minimal, however, as milder temperatures are expected to cause rapid thawing.

Although it was a frosty start to today, temperatures are expected to climb to 9C (48F) during the day. It comes after Altnaharra in the Highlands fell to -10.3C (13F) yesterday.

The coldest temperature recorded over the weekend was -6.2C (21F) in Baltasound in the Shetlands on Sunday. The lowest on the mainland was -3.4C (26F) at Fylingdales on the North York Moors on Saturday.

Meanwhile Achnagart in the Highlands has seen a 17 degree range of temperatures in less than 24 hours, with the mercury falling from 10C (50F) yesterday afternoon to -7C (19F) last night.

A couple’s wedding plans were ruined twice by the recent wintry weather in an ‘unbelievable’ run of bad luck.

The pair, from Exminster, are hoping for third time lucky with a ceremony today. The bride and groom cut the cake in front of a handful of guests who made it to the second ceremony. 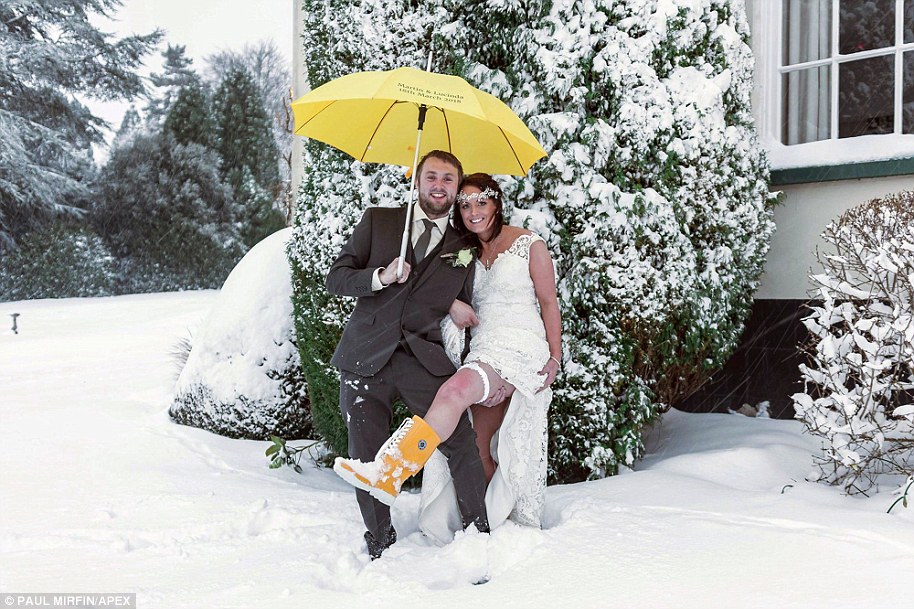 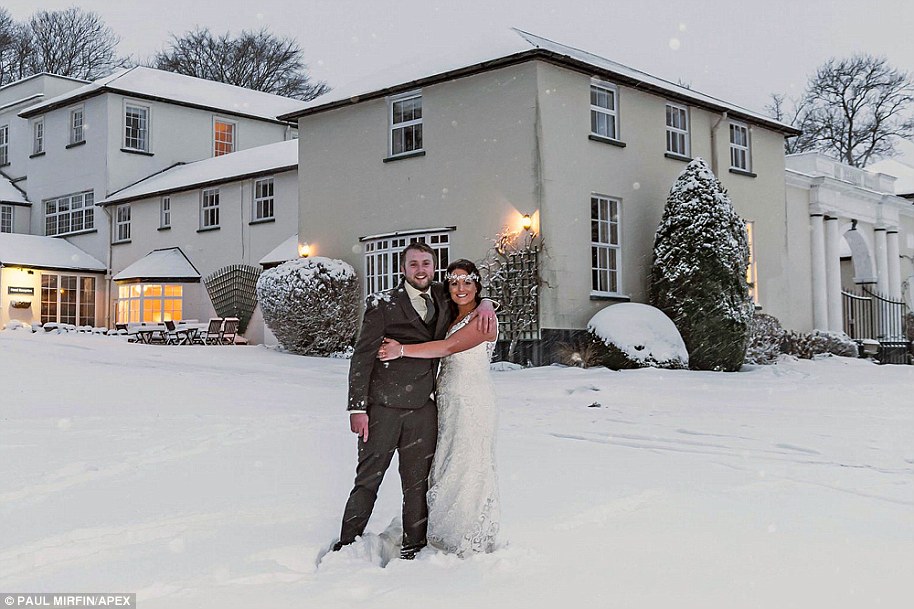 At their first attempt, the registrar and 60 guests failed to make it to the Lord Haldon Hotel because snow had made the road to the venue impassable.

Miss Shaw 32, described how she was ‘really upset and disappointed’ but the couple postponed their big day to last Sunday. She said ‘could not believe it’ when the snow hit again.

‘I thought, ‘it won’t happen a second time, no way’, but then guests were getting stuck and even the groom and best man got stranded half a mile away.’ 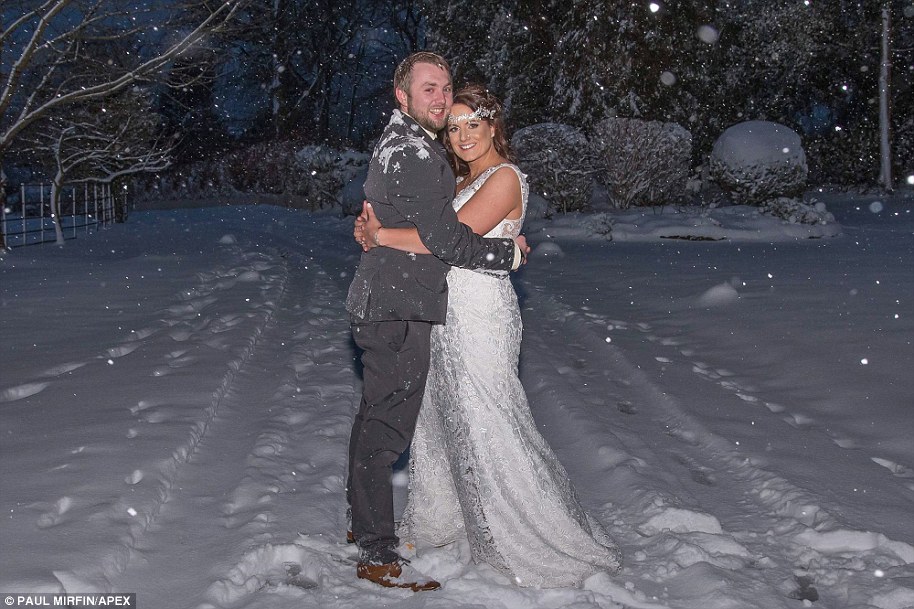 Mr Kelly and his best man finally arrived when a farmer gave them a lift by tractor. The couple were ‘married’ by the hotel’s duty manager Zoe Wakefield in front of the few witnesses who managed to make it.

Ms Wakefield said the ceremony had been ‘nerve-wracking’ but she had ‘remembered the order’ from previous weddings. ‘We wanted to make it a day [Lucinda] would not forget and we felt we did it,’ she said.

To make it official, the couple are arranging for the registrar to officiate a third ceremony later. ‘We can relax now, the forecast is for sunny spells, not snow,’ Miss Shaw said.