Is it time for Britain to get anti-drone technology?

Calls for tougher anti-drone detection systems at UK airports that can spot devices up to five miles away within three seconds will be renewed today, following the suspension of flights at Gatwick Airport.

According to the British Airline Pilots Association (Balpa), there were 117 near misses between manned aircraft and drones up until November this year, compared to 93 for the whole of 2017.

Experts believe a large drone could take down a passenger jet because it could shred an engine if it was sucked in or destroy its windscreen or windows, causing a sudden drop in cabin pressure.

Strong sales of small consumer drones – especially in the run up to Christmas each year – have led to repeated warnings about a possible threat to scheduled flights, which have become a reality just five days before December 25.

More expensive commercial drones can be flown from up to five miles away or even remotely using GPS programming.

Earlier this year, new laws came into force which ban all drones from flying above 400ft and within 1km (0.6 miles) of airport boundaries. Drone users who flout the restrictions could face an unlimited fine, up to five years in prison, or both.

A drone flies in the air, with a British Airways aircraft pictured to the rear in February 2017

Aviation experts will today be looking into how UK airports can be better protected. In May, London Southend Airport tested an anti-drone system which uses a combination of radio frequency and optical sensors to detect nearby drones.

The week-long trial using Metis Aerospace’s Skyperion product saw test drones flown within a 2.5-mile (4km) radius of the airport in Essex – 40 miles away from London – for the two sensors to pick up, and it was said to have been a success.

Meanwhile a system developed by three British companies which is capable of jamming signals on unmanned aerial vehicle was trialled in its first public test by the US Federal Aviation Authority in June 2016.

More recently in November 2017, a ‘detective early warning system’ and ‘drone interference system’ against unmanned aerial vehicles was trialled at Guangzhou Baiyun Airport in China, which has also faced issues with drones near airports.

The Cangqin system – which can work in all weather conditions – can monitor a low-altitude airspace five miles (8km) in diameter, and locate a drone three seconds after it becomes operative within the supervised range.

Back in Britain, research funded by the Department for Transport (DfT) found that a drone weighing 400g could smash a helicopter windscreen, and one weighing 2kg (4lbs) could critically damage an airliner’s windscreen.

Laws introduced to the Commons in May mean people flying drones which weigh 250g (9oz) or more will have to register with the Civil Aviation Authority (CAA). Drone pilots will be required to take an online safety test under the new legislation. 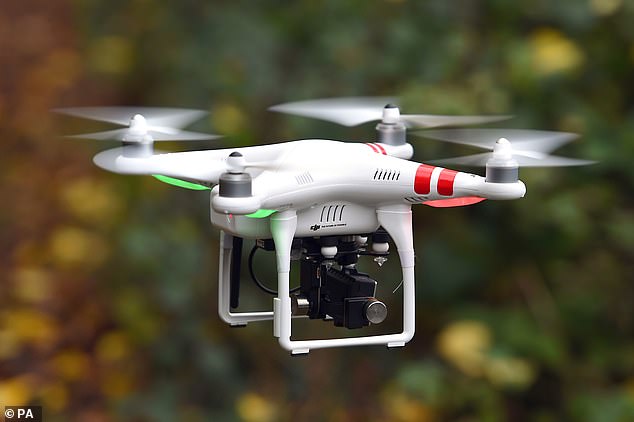 Drone users who flout the height and airport boundary restrictions could face an unlimited fine, up to five years in prison, or both

The requirements are set to come into force in November next year. In July, the DfT said it was considering introducing an age restriction, banning children from owning drones weighing at least 250g.

It also said it was considering giving police the power to issue on-the-spot fines of up to £300 for misuse and the ability to seize drones being used irresponsibly.

She told BBC News: ‘I think it’s important to be clear this is a crime, this drone is being flown illegally. Earlier this year we changed the law to make it illegal to fly within a kilometre of an airport and I know that police are out and trying to bring the drone down as quickly as possible.

‘This is an illegal act. We are also looking to extend police powers and early in the new year we’ll be looking at our next steps on that. The other thing we’re looking at is counter-drone technology. Technology in this area is obviously moving incredibly quickly, but we need to make sure we’re able to stop such activity in future.’

Were drones built by someone who planned to disrupt? Top expert says specialist equipment would have been needed

The drones used over London Gatwick Airport were potentially built by someone who planned to cause disruption, a top expert said today.

Samuel Luff, who has been flying drones for five years, said he believes the operator could have been manning the drone from up to five miles away.

Mr Luff, who runs Apollo Drone Services in Redhill, Surrey, also pointed out that it was raining at the time the drone was first sighted – giving further evidence that the device is specialised enough to work in wet conditions. 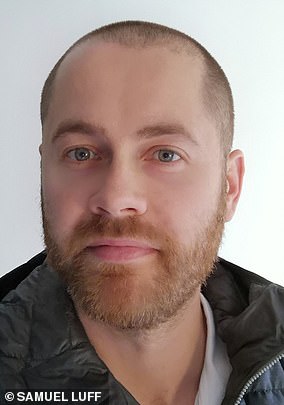 As a licensed and insured drone operator and a drone pilot for close to five years, I am actually amazed that it is only now in 2018 that we are seeing a serious threat at Gatwick Airport.

I have had many conversations with my clients over the years about just how destructive the technology could be in the wrong hands, and in my opinion this is what we are seeing this morning.

From the video that I have watched it is clear to me that the drones we are seeing are not of standard specification and have potentially been built for the purpose to disrupt.

Here’s the thing – the largest seller of drones, DJI, all have built in systems that prevent the operator from flying close to airports, to stop things like this happening.

Someone here has not only got close to the airport but has been seen over the runway itself.

This is not someone making a foolish mistake, this is someone who has planned this and built or modified a drone that can get this close to a runway.

It is also worth pointing out that at 9pm (the approximate time they were seen) it was raining.

Again, this points to something that is much more specialist, and Gatwick Airport has stated that ‘one of the drones is a heavy, industrial type’.

It is entirely possible these people were operating the drone from up to five miles away which will make it very hard to track them down. Drones are too small to be picked up by a radar as well so they can go relatively unnoticed.

What I would like to see here is the Civil Aviation Authority and the police make it very clear to people that breaking drone rules will have serious consequences.

There are thousands of videos online of people flying drones over crowds of people and through city centres. Very rarely do these people get prosecuted and it leads to things like this which damages our industry.

I have seen instances where unlicensed pilots know full well they are breaking the rules but do so anyway because they know that the police simply do not have the time to deal with them.

Drones are used for good all across the UK by sensible, qualified operators and it’s moments like this that further add to the public’s perception that all drones are bad.

Until someone is made an example of then I fully understand their concerns.

Baroness Sugg said authorities were hoping to get Gatwick open as quickly as possible as people travel for the Christmas break.

She added: ‘Our priority is to get that airport open as safely as possible so that people can fly off on their Christmas breaks, or people who are coming in to visit friends and family. The police are working to bring the drone down, and I am confident that they will do so. ‘

Also today, a top expert said the drones used over London Gatwick were potentially built by someone who planned to cause disruption.

Samuel Luff, who has been flying drones for five years, said he believes the operator could have been manning the drone from up to five miles away.

Mr Luff, who runs Apollo Drone Services in Redhill, Surrey, also pointed out that it was raining at the time the drone was first sighted – giving further evidence that the device is specialised enough to work in wet conditions.

This is not the first time an incident involving drones has been reported at London Gatwick.

The airport closed for around 20 minutes following a similar incident in 2017 as concerns were raised that drone pilots were deliberately trying to film close encounters with aircraft.

And in October, it was reported that a drone ‘put 130 lives at risk’ after nearly hitting an aircraft approaching the airport over the summer.

According to the UK Airprox Board, the flying gadget passed directly over the right wing of the Airbus A319 as it was preparing to land at the West Sussex airport in July.

Also in October, a drone collided with a commercial aircraft as it was approaching to land in Canada.

There were six passengers and two crew on the aircraft and the drone connected with its wing, but fortunately it suffered only minor damage, allowing it to land safely at Jean Lesage International Airport in Quebec City.

In June a Virgin Atlantic Boeing Dreamline avoided crashing into a drone by just 16ft (5m), with the jumbo jet recording the nearest miss in British aviation history.

At the time a Virgin spokesman said: ‘It’s vital that action is taken to regulate the use of drones near airports, and we urge the government to consider further proposals.’

Two months later a drone, flying higher than the 400ft limit, came within 50ft (15m) of hitting a Boeing 737 that was landing at Stansted Airport.

Security experts have previously warned that simple and affordable drones readily available on the high street for less than £100 could be turned into flying bombs by lone wolf Islamic State terrorists.

The Oxford Research Group’s Remote Control Project warned in 2016 that terrorists and activists were using the commercially available devices – with the technology of remote control warfare ‘impossible to control’.

In 2015, defence chiefs spoke of their concerns that ISIS was planning to use drones packed with explosives to attack crowds at major events like football matches and music festivals in order to kill scores of people.

Balpa has urged people be aware of the rules before they take their drone out and about.

Dr Rob Hunter, head of flight safety, said: ‘Even two kilograms of metal and plastic, including the battery, hitting an aircraft windscreen or engine or a helicopter tail rotor, could be catastrophic. People who buy these devices need to make sure that they know the rules and stick to them, so they don’t put anyone’s life in danger.

‘Pilots don’t want to ruin anyone’s fun but if you are going to use drones the message is clear: Know the laws or expect serious consequences. Before taking to the air have a really good think about where you are, keep your drone in sight, consider what aircraft might be flying about and keep clear – it is your responsibility.’

** Caught up in the Gatwick chaos? Please email: mark.duell@mailonline.co.uk or tips@dailymail.com **