Is it time to ditch open-plan kitchen and living rooms in favour of ‘broken-plan’ spaces?

The open-plan kitchen-living room has been a feature of modern British homes for several decades.

Indeed, back in the Eighties, knocking down walls to create a decent-sized living space was regarded as somewhat essential for the growing modern family.

But is it now the case that more and more of us are keen to reintroduce a greater sense of privacy and cosiness?

Or, at least, that one big room does not necessarily work when some members of the family want to watch TV, while others are happy to engage with their laptops, and the rest prefer peace and quiet to read their books or Kindles?

Certainly, Mary Duggan, a judge for the RIBA House Of The Year award, believes that the rise of technology is contributing to a waning open-plan trend. Instead, we could be entering the age of so-called ‘broken-plan’ living.

‘The ‘broken-plan’ layout helps break up a space and provide a structure to a large, rectangular room that, due to its size, may lack atmosphere,’ says James Bernard, the director of Plus Rooms, a design and build company that has completed more than 1,000 kitchen extensions (plusrooms.com).

‘The result, if you get it right, can be a cosier feel in relaxation areas and more privacy.’

So how do you achieve the look? Partitions can be created using statement furniture, such as high-backed sofas and chairs, cupboard units, a bookcase or half-wall, allowing the space to be both free-flowing and divided.

Colour and texture can also be implemented. Different coloured walls and different flooring (using carpet in the living space and tiles in the kitchen, for example) can create a sense of division and give each space its own identity. 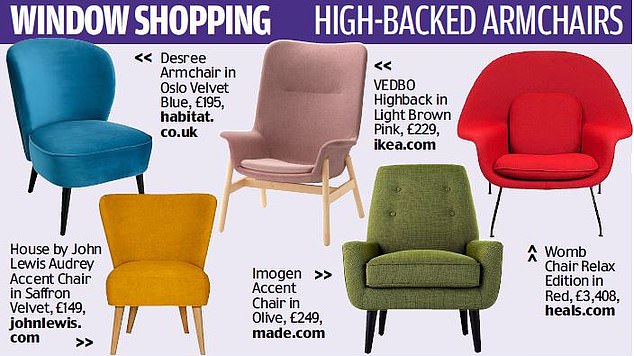 Shanti and Tom Sundaram, 61 and 58 respectively, have lived in their five-bedroom house in South East London for 20 years.

Their ground-floor layout once comprised a dining room, kitchen, living room and utility room, but, three years ago, they approached Plus Rooms, having decided they wanted more space for socialising with friends after two of their three children had moved out.

‘We gained more space by building a rear L-shaped extension. We didn’t want open-plan, although it was quite trendy, preferring a bit of sectionalisation,’ says Shanti.

Instead, they created different spaces linked by open doorways and partial walls.

Division between an informal area, where they have a table and chairs, and the sitting room was created by a corner, L-shaped half-wall. Contrasting bold primary colours on either side of the walls compartmentalised the space.

Shanti adds: ‘We knocked down one of the kitchen walls into the hallway to create a larger kitchen/dining room.

‘There is now a much better flow of light and space. We can use the rooms separately, because of the divisions, but still interact with people in different rooms. It’s fun and easy to live in.’ 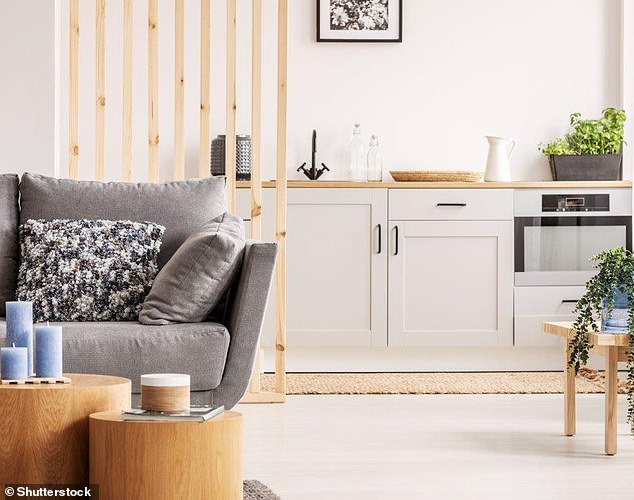 Open living: The open-plan kitchen-living room has been a feature of modern British homes for several decades

The five-bedroom houses at Crest Nicholson’s Upper Longcross development in Chertsey, Surrey, have a kitchen/dining area that is divided from the living space with a half-wall — a recent design created in direct response to customer feedback.

Marcus Evans, director of sales and marketing at Crest Nicholson Regeneration, explains: ‘We had purchasers telling us that they struggled to envision furniture placement and how their future home would look with other floorplan styles.

‘As a result, we have started installing partial walls in homes across many of our developments, allowing buyers to adapt the floorplan to suit their lifestyle.

‘We’re already seeing a strong response to this new offering and our sales of “broken-plan” homes have significantly increased.’

Upper Longcross is a new Garden Village, which, eventually, will have 1,700 homes.

Prices for the remaining two five-bedroom houses start at £1.2 million (crestnicholson.com). Avril and Tim Pearce, who are selling their five-bedroom house in Bramhope, Leeds, have their kitchen divided from the dining room by a line of units set into a slightly higher wall.

‘Opting for a “broken-plan” kitchen and dining area gave us the feeling of space you naturally get with an open-plan layout, but it also means that when you’re sat at the dining table, it doesn’t feel like you’re eating in the kitchen,’ says Avril.

‘You can talk without having to raise your voice to be heard over people having a conversation in the kitchen, but then, as soon as you stand up, you have the social benefits of an open-plan design.

‘It’s definitely something on which guests give us a lot of compliments.’

Ed Heaton, a partner and founder of buying agency Heaton & Partners (heatonpartners.com), says: ‘We have seen a steady increase over the past year or so of buyers looking for “broken-plan”.

‘While open-plan remains popular, many struggle with planning one huge, open space, so prefer to break the space into a number of different zones.

‘These are typically people who like to have some structure in their lives, and “soft” compartmentalisation can offer exactly that.’