Is it time to invest in Japan and its ‘cheap’ stock market?

Japan has a new Prime Minister after the ruling Liberal Democratic party’s leadership was secured by Fumio Kishida, who having suceeded Yoshihide Suga will be tasked with reviving an economy badly damaged by the Covid-19 pandemic.

Japan’s stock market has had a year of ups and downs, to add to many years of soap opera, but some investors believe it continues to look cheap versus global peers, such as the US, and potentially offers a lucrative opportunity over the longer term.

Japanese stocks have have had a mixed year, but analysts believe the market continues to look cheap

Japanese stock markets have had a volatile year.

The Nikkei 225 hit the 30,000 mark in February, the index’s highest level in 30 years, buoyed by the Bank of Japan’s pandemic-driven monetary stimulus and asset purchase programmes.

But a series of Covid-related setbacks pared back gains for the index, which is up less than 6 per cent year-to-date.

Index provider MSCI’s data shows Japanese stock markets have fared reasonably but not spectacularly in previous years, having delivered average annualised returns of 7.6 per cent over five years, compared to a world average of 11.9 per cent.

To put that in context, the UK has managed just 0.6 per cent on the same basis, while the US and China have delivered 15.4 per cent and 7 per cent respectively. 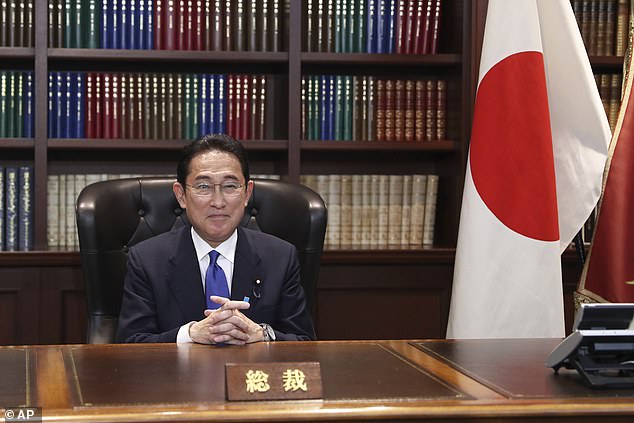 What’s important to investors who back Japan is that its corporations have undergone a steady process of reform in recent years, hiring independent directors and putting a greater emphasis on providing value to shareholders.

The desire is to make the nation a more shareholder-friendly place and Japan was one of the best dividend performers globally through 2020, when companies all over the world were forced to cut investor pay outs.

Ben Conway, head of fund management at Hawksmoor, says the arrival of a new PM is unlikely to shift the Japanese market’s long-term outlook.

He said: ‘Japan is certainly still cheap versus other markets. We do not place too much importance on the political situation as we think the reasons for investing in Japan: cheap valuation and a clear improvement in corporate governance, won’t be – or haven’t been – affected by a new PM.’

Japan’s stock market is often referred to as cheap but investors should weigh that assertion carefully.

Duncan Lamont, of Schroders, cautions that no global stock market really looks cheap right now but says: ‘In relative value terms, Japan, looks to offer better value, but it has been a perennial underperformer so is not without risk. The same goes for the UK.’

That is in contrast to the US, which looks particularly expensive across a variety of metrics. Yet US shares have been in that position for some time and continued to deliever high returns.

Certainly the gap between Japan and the US in valuation terms using the popular cyclically adjusted price to earnings ratio has widened substantially.

Schroders’ analysis shows that while the US is trading at well above long-term averages across Cape, forward and trailing price-to-earnings, price-to-book and dividend yield measures.

Japan is relatively speaking cheaper that the US but only trading in line with its own long-term averages.

How major markets stack up on valuation across different measures

The potential value in Japan has not gone unnoticed in the UK, with personal investors pouring a total of £223million into Japan funds from the start of the year to the end of July, according to data from the Investment Association.

This reflects underperformance for these active funds versus the Nikkei 225’s 27.9 per cent one-year return, 74.7 per cent five-year return and 238.5 per cent 10-year return.

‘The key opportunities remain in investing with managers who can access the very cheapest parts of the Japanese market, combined with a willingness to engage with corporate management to unlock value,’ says Conway.

‘It also lies with investing with managers who can take advantage of the high valuation dispersion within the market’.

He highlighted Jupiter Japan Income, Polar Capital Japan Value and M&G Japan Smaller Companies as good examples of funds set to benefit from the value on offer in Japanese stocks.

He says: ‘It focuses on identifying typically large and medium-sized businesses that are financially stable, with high quality and committed management teams, and net cash on their balance sheet.

‘As an income orientated strategy, it also aims to own businesses that can ably grow their earnings and cash flows to enable them to pay rising dividends.’

Vaid also highlighted the ‘highly-regarded fund management team’ behind Baillie Gifford Japanese, which ‘seeks out attractively valued growth companies of all sizes’ with investment decisions based on ‘detailed analysis of a company’s individual merits and longer-term potential for growth’

The high-conviction BG Japanese fund counts a number of well-known global brands among its holdings, with Nintendo, Sony and Softbank all among its 10 biggest positions, with a relatively low ongoing charges figure of 0.61 per cent. 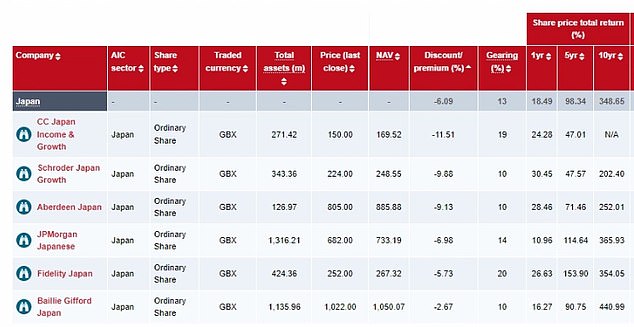 But there are cheaper ways of buying exposure to Japanese equity markets, via passively managed exchange-traded funds.

The average total expense ratio of MSCI Japan ETFs is between 0.12 per cent per annum and 0.59 per cent, according to justETF.

There are also a number of potential bargains to be had currently in the world of UK-listed, investment trusts investing in Japan, which are on average currently trading on a 6.7 per cent discount to net asset value, according to Association of Investment Companies data.

A similar, but less severe, situation is true of the Japanese Smaller Companies investment trust sector, which is currently sitting on an average discount to NAV of 1.8 per cent.

In fact, every investment trust in the Japan sector is currently available at a discount, ranging from 13.64 per cent to NAV for CC Japan Income & Growth to a 2 per cent discount to NAV for Baillie Gifford Japan.

JPMorgan Japanese is currently trading at a 7 per cent discount to net asset value of £748million, which analysts at Kepler said reflects a good opportunity for investors to ‘buy the dip’.

The London-listed investment trust has returned 56.6 per cent and 121.2 per cent over three and five years, respectively, outperforming the average of its Japan-focused peers over those periods. It has also outperformed on a NAV total return basis.

However, JPJ has had a more difficult 12 months, having underperformed its peers and the broader index.

Kepler analysts said: ‘We think JFJ is an attractive strategy for a growth-focussed investor. This is not just because of its impressive track record, but because of how its managers are focussed on capitalising on the secular trends driving Japan.

‘These trends often have long runways of growth, given the amount of time it takes for them to be realised. Two examples of multi-year trends are corporate governance reforms and Japan’s ageing population, with major progress still being made to resolve these issues.’