Is Karl Stefanovic trying to lure Carrie Bickmore over to Nine?

For months there’s been rumours that Carrie Bickmore and Lisa Wilkinson have been locked in a ‘bitter feud’ after the latter took up a role on The Project, this year.

Carrie and Karl were spotted in deep conversation at a recent luncheon in Melbourne and New Idea speculates that Karl was trying to persuade the blonde beauty to make the controversial move.

Is Karl Stefanovic trying to lure Carrie Bickmore over to Nine? Today show host to ‘get his revenge on Lisa Wilkinson by coaxing unhappy Project host over to rival network after she threatens to quit Channel 10 show’

The magazine claims the ploy would be Karl’s chance to ‘get revenge on Lisa’ after she abruptly quit the Today show last year following a pay dispute with the network.

New Idea further reports that Carrie has become ‘increasingly unhappy’ behind the desk at The Project, as Lisa continues to conduct ‘all the high-profile interviews’ with celebrities such as Amy Schumer and Celine Dion.

It was reported back in October last year that while Carrie was quick to congratulate Lisa for quitting the Today show, behind closed doors she is said have been annoyed by the news that Lisa would be joining her desk on the Channel 10 news program. 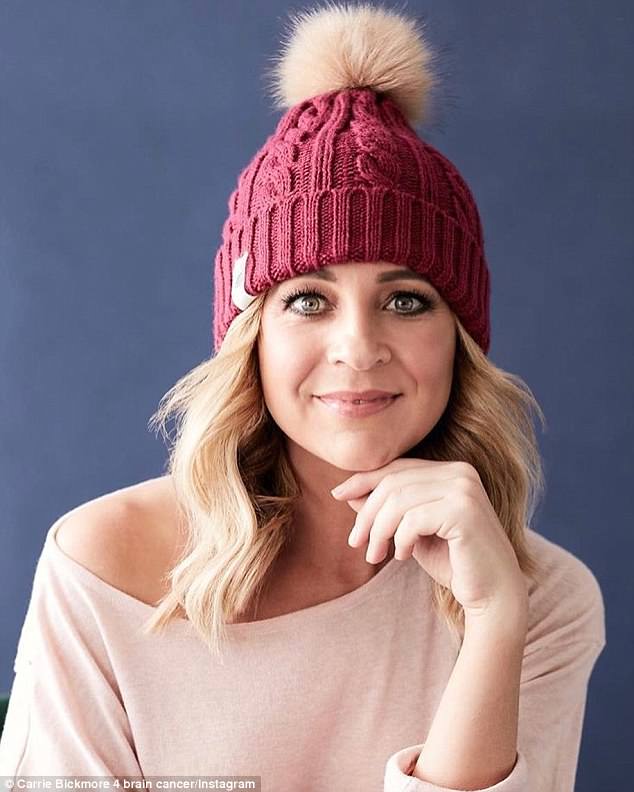 Not happy: New Idea further reports that Carrie has become ‘increasingly unhappy’ behind the desk at The Project, as Lisa continues to conduct ‘all the high-profile interviews’ with celebrities such as Amy Schumer and Celine Dion

According to The Daily Telegraph, Carrie was ‘less than impressed’ with Ten’s decision to recruit the decorated reporter.

‘[She is] p**ed off at Wilkinson being shipped in to sit alongside her,’ insiders allegedly told the publication at the time.

The Daily Telegraph noted that the centre of Carrie’s frustration was likely to be her comparably meek pay packet of a rumoured $500,000 – an amount almost four times less than Lisa is said to be earning in her role on The Project.

Lisa sensationally revealed she was quitting the Today show last year and defecting to Channel Ten, taking up a role on The Project in 2018.

The veteran magazine editor and journalist abruptly left the network after failing to achieve pay parity with co-host Karl.

Earlier this year, Lisa once again denied rumours of any feud with her new colleague, Carrie.

‘Carrie and I have been mates for years. I’m a huge admirer of her wonderful work and passion for the causes she believes in,’ she gushed to TV Week.

‘To be working with Carrie was one of the big reasons I decided to go to Ten. And we couldn’t be more excited to be working together.’

Meanwhile, New Idea claims if Carrie was to move to Nine it would help ‘ease the tensions’ Karl is having with his Today colleagues, particularly with Georgie Gardner, following the now infamous ‘Ubergate’ scandal.

Karl and his brother Peter were reportedly overheard ‘b**ching’ during a speakerphone conversation about their Nine colleagues and management by an Uber driver.

The driver later sold the details of the chat to New Idea magazine in a rumoured $50,000 deal.

Despite the whole affair generating negative headlines for Channel Nine, the Stefanovics continue to enjoy lucrative positions in the network.

They offered individual apologies following their ‘Ubergate’ scandal, with Peter stating he felt ‘awful for any embarrassment I’ve brought to my colleagues’.