Is mindfulness the new paracetamol? Brain scans show practice can act like a painkiller

Trendy mindfulness meditation could be used as a painkiller, a study suggests.

The practice involves ‘being present’ with your thoughts and feelings, normally using breathing techniques to sit silently and actively think about parts of your body.

It is said to help people feel less distressed when they face stressful emotional situations, but now scientists say they have proven for the first time it can also treat physical pain.

They put 28 healthy Americans through an eight-week mindfulness course and then compared them to a control group.

Participants were gently scolded on their arm during a brain scan to establish a baseline pain response.

This test was then repeated after the eight week course and the results compared.

Those who practiced mindfulness showed less activity in pain regions of the brain compared to the control group.

A separate experiment on long-term mindfulness followers indicated they had physical changes to their brains that influenced their perception of pain.

Researchers claim the results suggest mindfulness could be used instead of opioids or other painkillers for people with chronic aches.

Practicing mindfulness is on the rise, particularly in America with some studies estimating 5.7million adults have tired it at least once.

In the study, University of Wisconsin researchers put three groups of Americans through an eight-week stress reduction course.

Using drugs in pain management has come under scrutiny due to a rise in opioid addictions in the US fuelled by an overreliance on prescription painkillers.

There are also fears of a similar burgeoning crisis in the UK, with opioid hospitalisations soaring over the last decade as more Britons turn to painkillers while on NHS waiting lists for operations like hip or knee replacements.

Mindfulness is a popular form of meditation in which you focus on being intensely aware of what you’re sensing and feeling in the moment.

The practice involves breathing methods, guided imagery, and other practices to relax the body and mind and help reduce stress.

It is often touted as a universal tool for boosting mental wellbeing by reducing stress, anxiety and depression.

Of these 28 had mindfulness techniques included in their course, while the others did not to act as a control.

The course consists of a weekly 2.5 hour group class, a one-day retreat, and 45minutes of self-practise at home per day.

It incorporates simple yoga, mindfulness meditation and body scanning, technique where a person pays attention to their body and sensations in a gradual sequence from head to toe.

Mindfulness specifically is a form of guided meditation where people pay attention to the present moment and their immediate thoughts and feelings.

It generally involves breathing methods, guided imagery, and other practices to relax the body and mind and help reduce stress.

Over time the technique is said it improve mental wellbeing by helping people become aware of the present moment, helping them enjoy the world around them and understand themselves better.

In the study scientists took images scans of the participants’ brains and looked for two parts of the organ that normally activate in response to pain.

The researchers carefully applied heat to the participants’ forearm, carefully increasing the temperature to mimic a pain response.

Publishing their findings in The American Journal of Psychiatry, researchers found people who took the mindfulness course had less activity in one of the pain response areas in their brains.

‘Our finding supports the idea that for new practitioners, mindfulness training directly affects how sensory signals from the body are converted into a brain response,’ he said.

The researchers also examined the brains of ‘experienced’ mindfulness practitioners, those who go on intensive mediation retreats.

Dr Wielgosz said these scans showed mindfulness training had actually altered the areas of brain that shape how we experience pain.

‘Just like an experienced athlete plays a sport differently than a first-timer, experienced mindfulness practitioners seem to use their mental “muscles” differently in response to pain than first-time meditators,’ he said.

Concluding their study, the researchers their findings could be used a basis for further research to ultimately reduce the burned ongoing pain inflicts on people’s live. 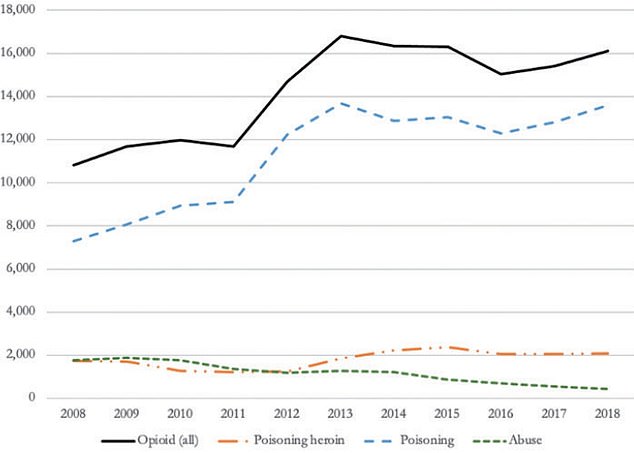 Opioid hospitlisations in England (the black line) have grown to just over 16,000 cases in 2018 up from about 10,000 in 2008, a rise of about 50 per cent in a decade, this was driven primarily by a growth in the number of opioid poisonings which are considered more serious (the dotted blue line) than opioid abuse (the green dotted line)

In the US, one fifth of Americans are estimated to live with some form of chronic pain.

America is still living with the fallout of the opioid epidemic that started in the early 2000s.

In 2019, the Center for Disease control revealed that nearly 71,000 Americans died from drug overdoses.

In Britain, the National Institute for Care Excellence estimates that 28million, about four out of 10 Britons , lives with some form of chronic pain.

One of the most common causes of chronic pain in the UK is arthritis, a condition causing pain and swelling in people’s joints, more common among older people.

Medics are on the hunt for alternative ways to manage pain due to increasing concerns over the use of opioids both in the UK and the US.

A study, published in February, found hospitalisations for opioid overdoses in Britain have soared by 50 percent in a decade.

The researchers, from the London School of Economics, highlighted there had been a six-fold increase in patients with multiple underlying health conditions needing emergency care for opioid use, suggesting they may have misused them as part of pain management.

HOW AMERICA GOT HOOKED ON OPIOIDS AND IS THE SAME HAPPENING in BRITAIN?

New research has shown hospital admissions for opioids has soared 50 per cent in the last decade in England adding to fears the UK could be facing a similar opioid crisis to the one in the US which has devastated thousands of families.

However, that same year – now regarded as the year the painkiller epidemic took hold – a CDC report revealed an unprecedented surge in rates of opioid addiction.