Is Public Health England facing the chop? Boris Johnson tells Tory MPs he plans review of ‘institutions’ amid fury over testing and warns he will not return to austerity or freeze public sector pay to cover the cost of coronavirus

By David Wilcock, Whitehall Correspondent For Mailonline and Daniel Martin, Policy Editor For The Daily Mail

The Prime Minister informed a meeting of the 1922 Committee of backbench Conservatives that he was planning a review of ‘a number of institutions’ once coronavirus is beaten back, according to the Times.

Tory MPs are  furious at what they see as PHE’s hampering of efforts to develop viable antibody tests that could potentially allow people who have had the virus to return to work and life to return to something approaching normal.

In the virtual meeting last night Mr Johnson also warned he will not freeze NHS pay or return to austerity to get Britain out of the economic black hole caused by coronavirus.

The Prime Minister insisted his plans to revitalise left-behind parts of the UK would go ahead to stimulate economic growth amid signs that the UK is already in a pandemic-induced recession.

Asked whether nurses could expect a pay freeze as part of any recovery plan, Mr Johnson (seen with Carrie Symonds at the Clap for Carers on Thursday) said ‘absolutely not’ 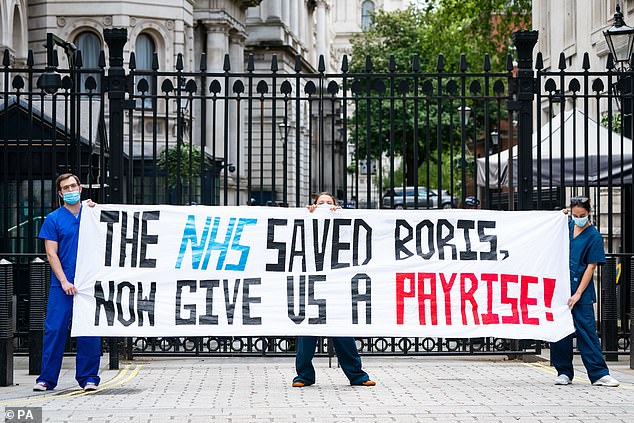 In a virtual meeting with Tory MPs, the Prime Minister said he would speed up his plans to reform hospitals, schools and the police

Mr Johnson was asked whether austerity would be part of the response but said quite the opposite: in fact he would spend more on infrastructure projects and the Northern Powerhourse.

He spoke a lot about the government we must address the concerns of the poor, saying it was important to look after them.

Asked whether nurses could expect a pay freeze as part of any recovery plan the PM, who spent a week in intensive care being treated for coronavirus, said ‘absolutely not. Anyone who suggests that can sit on it’, according to the Telegraph.

The PM said this was a completely different Tory government to anything known before, pointing out that many working class people had entrusted them with their vote.

He laid out his ‘grandmother’s footsteps’ plan to end the lockdown as he vowed to accelerate his domestic agenda in the wake of the virus.

Former Brexit secretary David Davis backed the approach this morning, tweeting: ‘Pleased to hear Boris Johnson dismiss austerity as a way to pay off the deficit after the crisis.

‘To attempt it would be economic nonsense. It should be paid off over 50 years, along with some limited QE (quantitative easing).’

In the virtual meeting with Tory MPs, the Prime Minister said he would speed up his plans to reform hospitals, schools and the police.

He told them his aim was to ‘build a platform’ for this country to recover from the ‘once-in-a-generation shock and repay the trust of those who put us here’. And he vowed not to bring back austerity.

Mr Johnson also explained that he wanted to ease the lockdown in such a gradual way that it would not provoke a second wave of the disease.

This is similar to the playground game of ‘grandmother’s footsteps’, in which children have to creep up on the grandmother to avoid provoking her.

The PM said the government had to be very careful when dealing with this virus, saying it was a question of driving forward very cautiously.

But he said he wanted to come out of the lockdown as quickly as possible.

The PM spoke to about 150 of his MPs, although many complained they could not hear him because so few participants had ‘muted’ their computers.

Mr Johnson talked about not letting the crisis define the UK, and not to let it get in the way of the country’s ambitions.

He vowed to push ahead on the domestic agenda on hospitals and police, and said he would go faster on building better infrastructure and education.

Mr Johnson also defended his government’s record on testing, saying the UK was testing more people per head of population than any other country bar two.