Is shelling out £20 on an Ostrich egg a cracking idea?

Smooth as a slab of marble, shiny as a bowling ball and as big as my head, an ostrich egg is a thing to behold.

It’s also extremely heavy — at 2 kg, it weighs the same as a whole chicken.

The 4 mm shell is so thick that if it falls on the floor, it’s more likely to dent the tiles than smash into pieces. And it makes everything in my kitchen look like it’s shrunk to The Borrowers proportions, from the teeny-tiny egg cup it’s balancing on to the teaspoon I’m using to bash the shell.

Expect to see a lot more of these enormous eggs in the months to come. It’s ostrich-laying season — which runs from April until September — and this week these brutes went on sale at Waitrose, costing £19.99 each.

They’ve also popped up on the menu of a London restaurant, Florentine, where you can tuck into a Full English breakfast made with a fried ostrich egg — for £65. (The dish is so popular there’s a waiting list.) It sounds expensive, but one ostrich egg is equivalent to 24 normal-sized chicken eggs — and can feed up to ten people.

Sarah Rainey with her soft-boiled ostrich egg, which is extremely heavy at 2kg

At 20cm tall and 45cm around, a single egg provides 2,000 calories and 144g of protein — three times an adult’s recommended daily allowance.

They also contain calcium, iron and vitamin A, and are lower in cholesterol and saturated fat than chickens’ eggs.

Sourced from a free-range flock of South African black ostriches on a farm in Lincolnshire, the Waitrose eggs come from specialist supplier Clarence Court. There are 27 ostriches on the farm, who produce around 2,300 eggs in a season. They’ll be restocked weekly, but you’ll need to be quick if you want to get your hands on one.

‘They’re rich and buttery,’ she adds. ‘They’re great for baking because the white is lighter than a chicken’s egg. And if you want to make a load of scrambled eggs, this is much easier than breaking egg after egg into a pan. They’re becoming more readily available because there are more breeding pairs than ever.

‘But they’re still rare — an ostrich only lays every other day.’

Armed with an arsenal of tools — from a hammer to a hacksaw — and some vast catering pans borrowed from a restaurant down the road, I’m going to try five standard cooking methods.

How long does it take to boil an ostrich egg? Is my biggest pan vast enough to fry one? And can you really feed a whole family with a single egg?

Time to get cracking…

Tools: Hammer (to crack the shell), hacksaw (to saw the top off the white).

Method: First, I pour boiling water into a ten-litre saucepan. It takes four kettle-loads to fill it.

Next, I carefully lower the egg into the water. It’s so heavy the ladle nearly snaps and I scald my hands trying to stop it toppling off.

I set a timer for 50 minutes and leave it bubbling away. When the egg is cooked, it needs to be plunged into a bowl of ice-cold water to stop it cooking further. Even this requires an industrial-sized bowl.

Meanwhile, I toast some giant soldiers — made by slicing a loaf lengthways.

I sit the egg upright in a bowl and use a hammer, rather than a spoon, to smash the top of the shell. It’s as thick as a china cup and withstands some strenuous blows before it begins to weaken, sending shards ricocheting around the kitchen. A pair of safety goggles wouldn’t go amiss.

Eventually, I’m in, and I use a miniature hacksaw to saw into the white and neatly remove the top from the egg.

Taste: Forget the taste — the first thing that hits me is the smell.

A foul cloud of sulphur seems to erupt and soon the room is filled with the pungent aroma of egg. Holding my nose, I grab a buttered soldier and dig in. While the centre of the yolk is still runny, the outside is rock-hard.

The white, meanwhile, looks suspiciously gooey. The egg is so massive that heat doesn’t seem to penetrate it evenly. Worse, I keep finding pieces of shell which have fallen inside, adding an unwelcome crunch to every mouthful.

Verdict: 2/5 — While it looks impressive, that eggy stench is too off-putting.

Timing: Seven minutes and 30 seconds on a high heat.

Method: With my hammer skills perfected, it’s much easier to break into the egg this time — and I don’t have to worry about keeping the yolk whole. I smash a hole in the shell, peel back the membrane (a white, fibrous protective layer) and tip the egg into a large bowl.

Next, it’s time to season it with salt and pepper, a glug of milk and start whisking — just as you would a normal egg.

It feels much thicker and gloopier than a chicken’s egg and takes some serious elbow grease to bind together.

Meanwhile, I melt a huge slab of butter — almost half a pack or 100g — in a deep saucepan, before tipping in the egg. 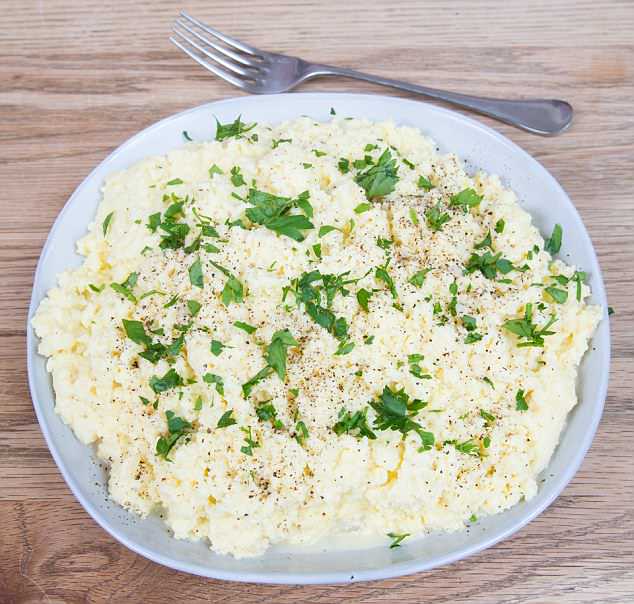 After a few minutes of continuous stirring, it starts to catch.

Strangely, it also foams. Once the egg is at the right consistency — I like mine fluffy — I take the pan off the heat.

Taste: Rich and creamy, this is among the best scrambled egg I’ve ever tasted.

There’s a towering mound of it, too, with enough to serve ten people, and all I had to do was crack one egg.

The only downside is the watery residue, which starts to develop after about five minutes.

This happens with any scrambled egg, as moisture seeps out of the cooked bits. But the bigger the egg, the more residue there is — and if you leave it too long it looks unappetising.

Verdict: 4/5 — Delicious, as long as you eat it while it’s piping hot.

Method: I prepare it the same way as the scrambled egg, but use plenty more herbs and seasoning (you could also add chopped ham and grated cheese).

It needs to go in a frying pan, so I melt 50g of butter. Once the pan is hot, I tip in the whisked egg mixture and jiggle it around with a wooden spoon as it cooks, so it doesn’t solidify.

There’s a lot of liquid and it keeps dribbling over the sides of the pan.

If this was a normal omelette, I’d be tempted to flip it, but there’s just too much egg — and it’s too valuable to risk a spillage. 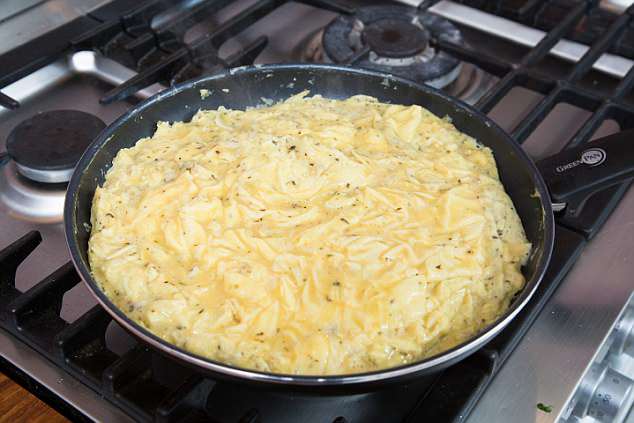 The ostrich egg omelette is edible, but no better than a standard six-egg omelette

Instead, after around nine minutes and once it’s golden-brown on the bottom, I use a palette knife to flip half the omelette over the other half and let the egg finish cooking.

Taste: The creaminess is the same as the scrambled egg, and the crispy base is tasty — but for some reason my omelette looks grey.

This is a chemical reaction which happens when the hydrogen sulphide in the white reacts with iron in the yolk, normally when it’s been overcooked.

While the outside is done, the omelette still looks oozy in the middle — so I’m not sure where I went wrong. It’s so big it barely fits on a dinner plate.

Verdict: 3/5 — Edible, but no better than a standard six-egg omelette.

Tools: Hammer, pliers (to prise off jagged bits of shell), a large bowl and an even larger non-stick saucepan — mine is 30cm in diameter.

Method: The trickiest part of this technique is getting the egg yolk out whole.

Ostrich farmer Angela Pober suggests finding the ‘soft end’ of the egg and trying to break in here first. ‘This is where the chick uses its beak to peck out,’ she explains.

‘The pointy end is much harder. If you tap the soft end repeatedly it should start to chip away.’

I locate the soft end and attack it with the sharp end of a hammer. After several blows, cracks start appearing and I can pull pieces of shell off with my hands. The aim is not to break the membrane too early, or raw egg will dribble out.

Once I’ve made a large enough hole in the shell, I use the pliers to neaten it up — this will stop the yolk from being punctured by spiky shell edges. 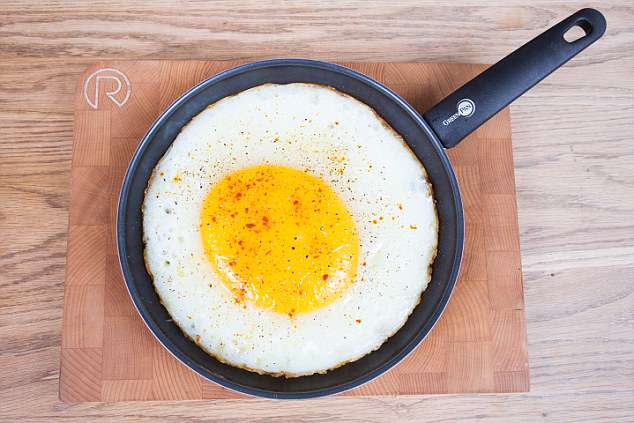 Then, I use a sharp knife to pierce the membrane and peel it back with my fingers. Wobbly and gelatinous, the yolk peers back at me like an eyeball.

In one swift movement, I upend the egg and it plops, yolk intact, into a bowl.

Next, I slide it gently into the pan, containing a drizzle of olive oil over a medium heat. There’s so much liquid that it almost overflows. As it cooks, I baste the egg with spoonfuls of hot butter to get the top layer to cook.

It certainly looks like a normal fried egg and tastes great: the yolk is rich, buttery and pleasingly runny, while the white is crispy underneath and browned at the edges.

The serving suggestion on the box is to put this in the middle of the table at a party, surrounded by crudités.

You might need to invite some neighbours round, though; there’s more than enough for one family.

Verdict: 5/5 — A show-stopping party-piece that’s even tastier than a chicken’s egg.

Tools: Hammer, pliers, large resealable plastic bag (for poaching the egg inside), bag-sealing clip and a sieve (to scoop it out once it’s cooked).

Timing: 23 minutes and 30 seconds if you want a runny yolk.

Method: Poaching an egg is difficult at the best of times — but when it comes to ostrich eggs, it’s a Herculean task. Having scoured the internet in search of ‘how-to’ guides, this seems to be a world first — nobody has ever poached a whole ostrich egg before.

Not only do I have to get the yolk out intact, requiring a delicate juggling act of hammering, cracking, peeling and gingerly tipping it out, but I have to get it into a 2.5 litre plastic bag.

The idea — as invented by Jamie Oliver, who uses cling film pockets to poach his eggs — is that the bag will bind the egg together as it poaches, rather than letting it whirl around in the water. 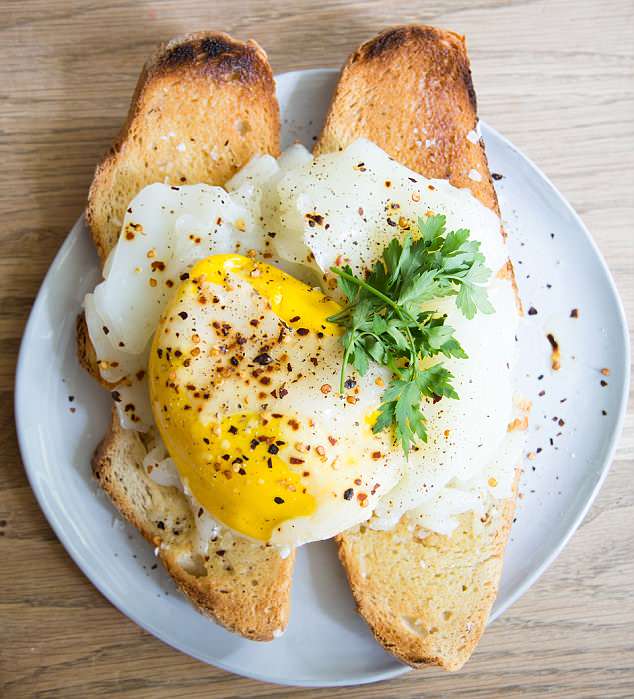 The poached ostrich egg on toast, a show-stopping party piece tastier than a chicken’s egg

I seal the egg inside the bag, clip it shut and lower it into the huge catering saucepan, which is simmering away with four kettles’ worth of boiling water.

As the bag fills with steam it can inflate, so you’ll need to prod it down every so often — and keep checking to make sure it’s cooking evenly.

Once it’s done, I use a sieve to take it out of the pan, open the bag and tip the egg out on to two super-sized slices of toast.

Taste: The lack of previous attempts really should have been a warning. My poached ostrich egg is a disaster.

It looks less like an egg and more like a creature from the deep. The white is gungy and translucent, and the yolk has hardened to a rubbery texture. Even camouflaging it with some herbs doesn’t make me want to tuck in.

Strangely, when I cut into the yolk it’s runny in the very centre, but that’s the only thing going for it.

Verdict: 0/5 — I couldn’t stomach this if you paid me, and poached eggs are impossible to share so I don’t see the point.