Is the boss who quit in hugging row poised to win back Ted Baker?

Is the boss who quit in hugging row poised to win back Ted Baker? Four months after leaving, founder Ray Kelvin is linked to buy-out plans

Ted Baker founder Ray Kelvin is understood to have considered making a swoop on the business that he left under a cloud in March.

Fashion market sources have told The Mail on Sunday the 63-year-old has indicated he is prepared to throw his significant shareholding, more than a third of the company, behind a buy-out that would take the business private and leave the existing management in charge.

Such a deal would result in it disappearing from the London Stock Exchange for the first time in more than two decades.

Holding position: Ray Kelvin with Mary and Michael Parkinson at a book launch

Kelvin left Ted Baker with immediate effect in March after he was buffeted by allegations of misconduct and that staff had been subjected to ‘forced hugging’.

The company appointed a law firm to undertake an investigation into the allegations made against him. It concluded the following month, but with the company making no comment on the claims. Instead it vowed to retrain staff on ‘acceptable workplace conduct’ and to maintain a confidential whistle-blowing hotline.

Today Kelvin still owns 35 per cent of the shares worth £32.14 each at their peak in March last year, valuing the business at £1.4 billion. But a brutal time for fashion firms – and an investor retreat after the hugging scandal – have left the shares languishing at £8.38 on Friday.

That means, with his backing, a private equity firm or a consortium of investors would be able to snap up the business for just over £242 million at Friday’s price. Retail market sources said he would invite his friend and former finance director Lindsay Page to help him run the business if he takes it private. 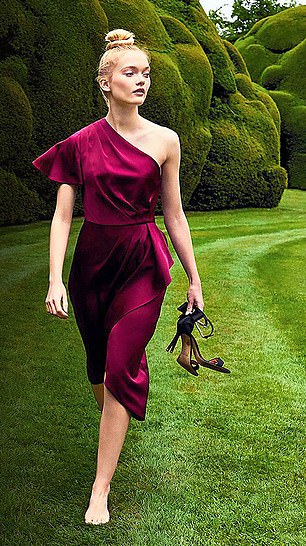 Page, a former partner at accountancy firm Binder Hamlyn, is currently overseeing operations as chief executive following Kelvin’s departure. Kelvin is understood to have aired the idea to close associates.

Sources said manoeuvres have so far been ‘discreet’ and it is not known if any attempt to buy the business is progressing or whether advisers have been appointed.

Kelvin is understood to be in the US on an ‘extended holiday’ with his family although he is believed to have maintained contact with his business associates. Sources said the scandal, which first emerged through an online petition, could discourage some private equity firms.

But one source dismissed the suggestion private investors would be put off when a prized asset was available at a significant discount. One fashion source said: ‘Ted Baker is still a great brand and has proved resilient even in retail’s toughest times.

‘The bottom line though is that Ray Kelvin is Ted Baker.

‘Private equity firms will find a way to make that work even if Ray takes some arms-length or advisory role. But it would be very difficult while it remains listed on the stock exchange and everyone, including Ray and Lindsay, knows that taking it private is the only thing that makes sense now.’

Another source suggested London-based Permira and Bridgepoint would be ‘the kind of private equity firms that would know how to handle a brand like Ted Baker’. Kelvin’s parting message was also cryptic. He said: ‘As a shareholder in the business I’ll support Lindsay in his leadership and be available to him and the team wherever I can offer helpful advice.

‘I’m extremely proud of what we’ve achieved in building Ted Baker to the global brand it is today. The past few months have been deeply distressing and I’ll now be taking time privately with my family to consider what my next adventure will be. Bye for now, Ray.’

Kelvin has always denied all allegations of misconduct. However, a return to the business would still be controversial after the testing time it has faced since accusations broke just weeks before Christmas.

Ted Baker has not made any comment on the specific allegations against Kelvin. After his departure it said that, as a result of his resignation, the independent investigation by the law firm Herbert Smith Freehills had focused on ‘the company’s policies, procedures and handling of HR-related complaints’.

But some shareholders have continued to be dissatisfied with the outcome, with one reportedly demanding a ‘fresh pair of eyes’ and ‘a non-hugging version of Ray Kelvin’.

Chairman David Bernstein has said he wants ‘a better environment for all employees’. Ted Baker and Kelvin declined to comment.