Is this America’s biggest miscarriage of justice? Chicago drops SEVEN convictions for inmates

More than a half century after the assassination of Malcolm X, two of his convicted killers were last year formally exonerated after years of doubt about who was responsible for the civil rights icon’s death.

Manhattan judge Ellen Biben dismissed the convictions of Muhammad Aziz and the late Khalil Islam, after prosecutors and the men’s lawyers said a renewed investigation found new evidence that they were not involved with the killing and determined that authorities withheld some of what they knew.

FBI files showed FBI Director J. Edgar Hoover ordered agents to tell witnesses not to reveal they were informants when talking with police and prosecutors.

Aziz told the court last year: ‘The events that led to my exoneration should never have occurred. I am an 83-year-old man who was victimized by the criminal justice system.’

He and Islam, who maintained their innocence from the start in the 1965 killing at Harlem’s Audubon Ballroom, were paroled in the 1980s. Islam died in 2009, aged 74. 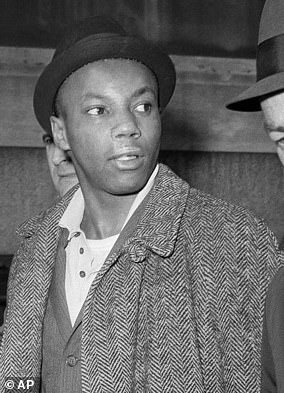 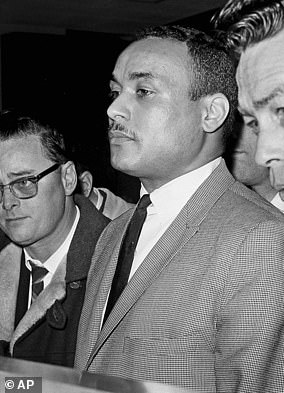 Aziz, pictured at left being escorted by detectives after his arrest in New York in 1965, and alleged accomplice Islam, who died in 2009, were exonerated after prosecutors and defense lawyers said they were not involved in the assassination 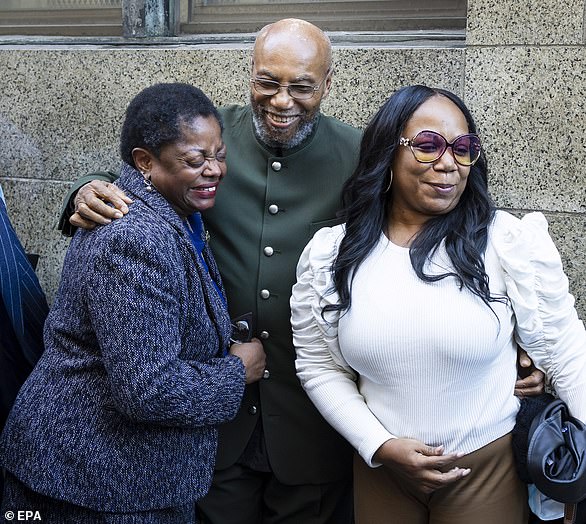 Aziz and Islam, then known as Norman 3X Butler and Thomas 15X Johnson, and a third man were convicted of murder in March 1966. They were sentenced to life in prison.

The two offered alibis, and no physical evidence linked them to the crime. Halim was paroled in 2010. He identified some other men as accomplices, but no one else has ever been held accountable for the crime.

The investigation found information in FBI files about witnesses who couldn’t identify Islam and implicated other suspects.

The judge in the case told Aziz: ‘We are moving today to vacate the convictions and dismiss the indictments.

‘I apologize for what were serious, unacceptable violations of law and the public trust.’

The files showed that Hoover ordered agents to tell witnesses not to reveal that they were informants when talking with police and prosecutors, Vance said.

‘There is one ultimate conclusion: Mr Aziz and Mr Islam were wrongfully convicted of this crime,’ Vance said – adding that there is no prospect of retrying the 56-year-old case.

He apologized for law enforcement’s ‘serious, unacceptable violations of law and the public trust’.

Dewey Bozella spent 26 years in New York’s notorious Sing Sing prison for a murder he did not commit.

For more than a quarter of a century he knew daily despair as he battled to clear his name over the brutal killing of a 92-year-old woman.

He could have become a free man four times if he had pleaded guilty. Each time he refused, maintaining his innocence.

Born in Brooklyn, Bozella was nine years old when he saw his father beat his pregnant mother to death. Later one brother was killed in a stabbing and another shot in the head.

Bozella became a petty criminal, but tried to start a new life by moving to upstate Poughkeepsie and taking up boxing at a gym run by former heavyweight champ Floyd Patterson. 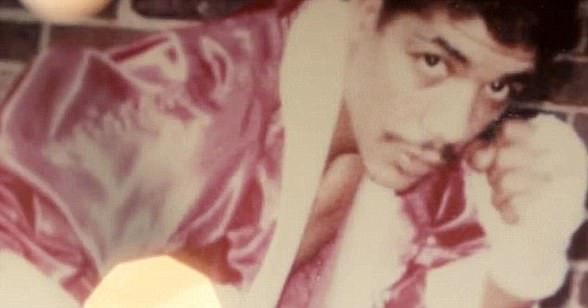 But at 18 he was arrested for a local woman’s murder. Seven years later he was convicted of the killing.

Bozella said he had been bicycling far from the scene, but two convicts claimed he was the murderer in return for their own freedom. He received a sentence of 20 years to life.

‘Every day I had to ask myself, ‘How do I survive this nightmare, Sing Sing,’ a place where hate and anger are the order of the day,’ Bozella told ESPN in 2011.

‘I didn’t merely want to survive, I wanted to thrive. Boxing awakened me. I felt free during my workouts for the first time. I was no longer a prisoner.’

In 1990, Bozella won a second trial. The prosecutor offered him a deal – admit the crime and go free. Stubbornly, Bozella refused. And then the jury convicted him. 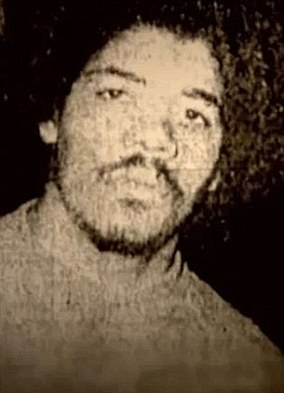 Bozella had to spend 19 more years at the Sing Sing Correctional Facility in Ossining  where he became the prison’s light-heavyweight boxing champion.

He fell in love with a woman who was visiting another inmate, and got married.

He said: ‘I learned to take myself from the bad position and make it a better position. If I have to die in prison, that’s just the way it is.’

Bozella wrote the same letter to the Innocence Project week after week, asking them to take up his case.

Five years after receiving the first letter, the Innocence Project agreed, but  police had destroyed all of the physical evidence in the case.

The law firm WilmerHale eventually took on the case and tracked down the senior detective who investigated the murder. It was to be a vital breakthrough.

Arthur Regula had kept the only copy of the case file and had taken it home with him after he retired.

He told ESPN: ‘I had figured some day someone would come knocking on my door. There were certain things in the case that made me have doubts. I just could never throw it away.’

The file revealed that prosecution witnesses had lied, and that another suspect had confessed to the crime – information withheld from Bozella’s lawyers all those years.

Bozella prepared for his first professional fight in 2011 and then-President Barack Obama telephoned him. 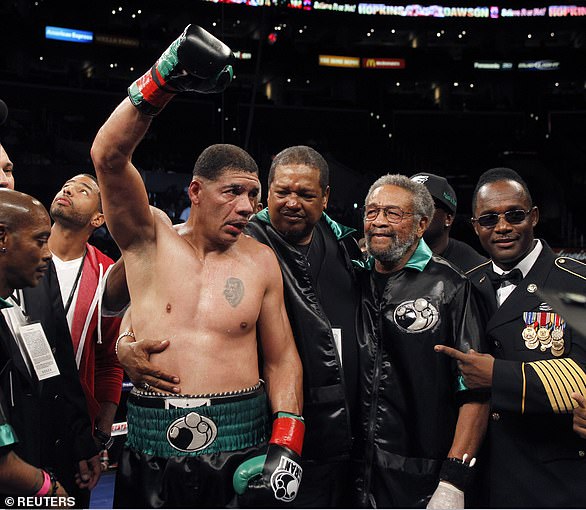 Dewey Bozella, who was freed after 26 years in prison, prepared for his first professional fight in 2011 and then-President Barack Obama telephoned him

Mr Obama said: ‘I heard about your story and wanted to call and say good luck in your first professional fight.

Bozella told ABC New York station WABC-TV about the dream that kept him going through the years.

He said: ‘My message is to never let fear define who you are, and never let where you came from determine where you are going.

‘When I was in prison, they were telling me, ‘You can’t do this, you can’t do that, it’s never going to happen.’ And now look. It was something I believed in my heart would happen.’

Man spent 19 years in jail after wrongfully convicted of murder 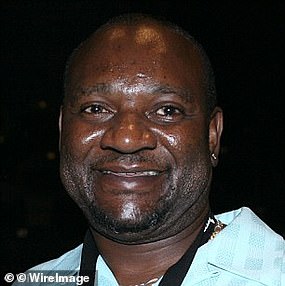 Darryl Hunt was 20 when he was convicted of first-degree murder in the death of Deborah Sykes, a copy editor at the Sentinel, a former afternoon newspaper

Darryl Hunt was 20 when he was convicted of first-degree murder in the death of Deborah Sykes, a copy editor at the Sentinel, a former afternoon newspaper.

Sykes was found dead in 1984 on a grassy slope close to her office with 16 stab wounds to her body.

Hunt barely escaped the death penalty, and was convicted again at a second trial in 1990.

In February 2004, DNA evidence led police to Willard Brown, who confessed to the killing.

Following his release, Hunt was awarded more than $1.6 million from the city of Winston-Salem, and dedicated the remainder of his life to fighting for justice for the wrongfully convicted.

Hunt worked with the Innocence Project and started his own organization, The Darryl Hunt Project for Freedom and Justice Inc.

‘[Hunt] was very determined to do his best to right wrongs and to help those leaving prisons have a better life with his project,’ said the Reverend Carlton Eversley of Dellabrook Presbyterian Church.

‘He emerged from prison a man of grace and forgiveness with a remarkable lack of anger and bitterness,’ Jim O’Neill, district attorney of Forsyth county, told the Winston-Salem Journal.

Police in Winston-Salem, North Carolina said Hunt was found unresponsive inside a car on University Parkway near the College Plaza shopping center after he was reported missing the previous day.

A person who knew Hunt told the newspaper he had been diagnosed with prostate cancer about 18 months earlier.

‘The burdens he had had become more intensified recently; they were constantly with him. He had been through so much,’ said Jet Hollander, an activist who worked with Hunt.

A close friend of Hunt’s told the Journal he was struggling with depression and that he was hurt by the 2014 separation from his wife April, whom he married in 2000.

‘Darryl had a lot of pride, dignity and didn’t put himself out there for his own care,’ said the Reverend John Mendez of Emmanuel Baptist Church. ‘He was trying to make some sense out of his life.’

Teenager, 18, locked away for 15 years after witness said she was ’65 percent sure’ he was rapist

Jimmy Ray Bromgard was sentenced to 40 years in prison for the brutal rape of an eight-year-old girl in 1987 – a crime he did not commit.

He was convicted after a witness who said she was ’65 per cent sure’ pointed to him as the perpetrator.

Hair fibers taken from the victim’s bed at her home in Billings, Montana were found to be indistinguishable from Bromgard’s hair.

But an inept forensic analyst told a jurythat there was less than a one-in-ten-thousand chance that the hairs did not belong to Bromgard. 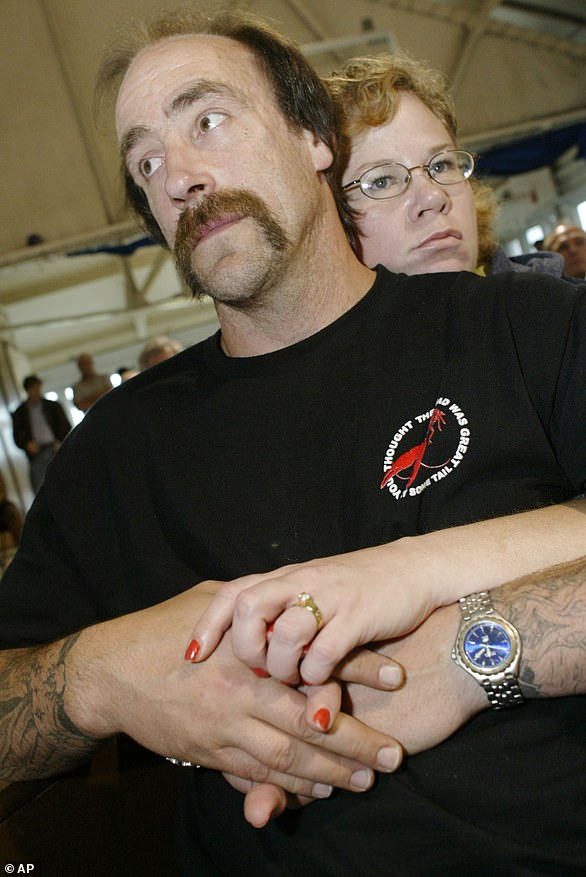 This was based on a complete lie as no standard exists to match hair to that microscopic level.

Bromgard, who was 18 at the time and also burdened by a useless defense attorney, told the court that he was at home and asleep when the crime occurred.

He was found guilty and sentenced to life in prison in 1987. He spent almost 15 years in prison before he was turned down for release by the parole board because he refused to take part in a sex offenders’ program in jail.

DNA testing of semen samples from the victim’s underwear were found not to belong to Bromgard.

He was freed in 2002 and has received compensation for the miscarriage of justice.

Anthony Hicks was stopped for a traffic violation in 1991 when he was charged with robbing and sexually assaulting a woman in her Wisconsin home.

Another inmate thought he looked similar to a police sketch of the suspect leading to the charge – before hair fibers were found at the scene. 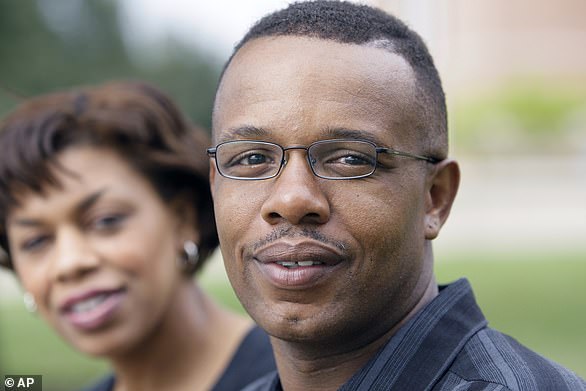 He was sentenced to 20 years in jail.

After serving five years, Hicks was allowed access to his evidence and had it DNA tested.

He was exonerated in April 1997 after the genetic tests proved he could not have committed the crime. Hicks received $25,000 in compensation.

Man sentenced to DEATH for kidnap, rape and murder of young girl in Idaho was released after 18 years

Charles Irvin Fain was given the death penalty for the kidnap, rape and murder of a young girl in 1982 in Nampa, Idaho.

Fain was originally questioned after he was reportedly seen near a river where her body was found.

He was asked to submit hair samples – which the FBI found were similar to those found at the crime scene. 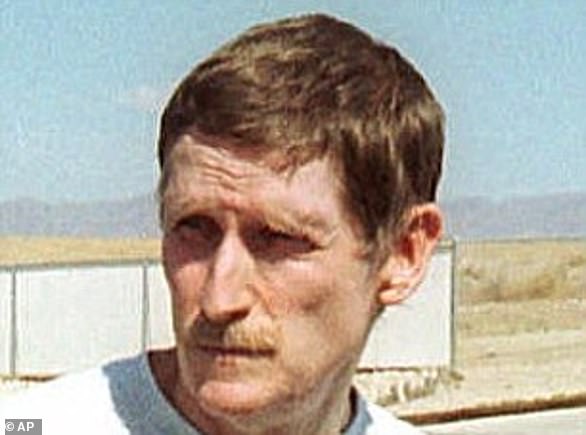 Charles Irvin Fain was given the death penalty for the kidnap, rape and murder of a young girl in 1982 in Nampa, Idaho

A hair analyst later testified that Fain’s hair shared an uncommon trait as that found at the scene – despite there not being scientific evidence on the frequency of varying characteristics in hair.

Fain has always maintained his innocence – and in 2001, DNA proved he was telling the truth.

Mitochondrial DNA testing conducted on appeal showed that pubic hairs found in the girl’s underwear did not belong to Fain.

He was released in 2001 – having served 18 years for heinous crimes he did not commit.