Is this Emirates’ first ever premium economy seat? Firm behind newly unveiled design says the customer is a ‘Middle Eastern-based airline’

A newly unveiled airline seat is being tipped as the seat Emirates will install in its first ever premium economy cabin.

Design firm Haeco Cabin Solutions showcased its new Eclipse seat at the Aircraft Interiors Expo, explaining that it’s for ‘long-haul premium economy’ and that its launch customer would be a ‘Middle Eastern-based airline’ who will begin flying it in 2020.

Given that last year Dubai-based Emirates announced that it would be launching a premium economy class cabin from 2020, aviation websites have been putting two and two together.

The brand new Eclipse seat unveiled by Haeco  Cabin Solutions, which is being tipped by some aviation specialists as the seat Emirates will install in its first ever premium economy cabin

For example, Simple Flying wrote: ‘There is probable cause to believe it could be Emirates.

‘The airline is known to be implementing premium economy in the future, and this seat fits that mission.

‘In fact, the seat represents a good middle ground between the carrier’s economy and business cabins.’

When approached by MailOnline Travel, Emirates refused to comment.

According to Haeco Cabin Solutions, the Eclipse seat has an innovative layout and design and could be also used for short-haul business class travel.

Doug Rasmussen, president and group director of Haeco Cabin Solutions, said: ‘We saw an opportunity to develop a premium product for an emerging new class between premium economy and business class seating that would be appreciated both by passengers and airlines. 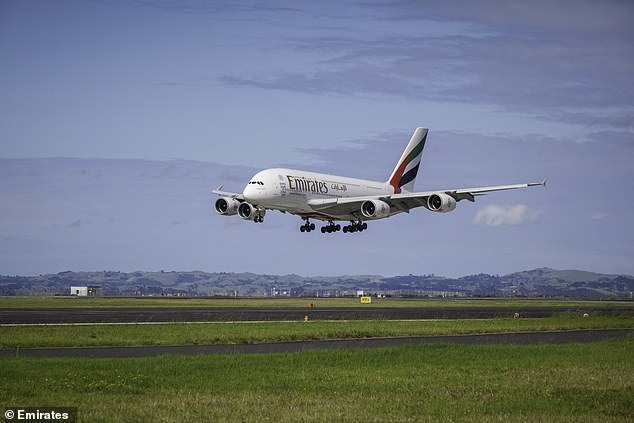 ‘We harnessed our decades of experience in providing premium seating products and services to take a holistic approach to creating a new standard. The unique advantages of the Eclipse seat, together with the integrated cabin, can create up to a 14 per cent increase in passengers within the same cabin space.’

Customer deliveries will start in the first quarter of 2020 after the Eclipse Cabin has been certified. It has already achieved technical viability with Boeing and configurations for the Boeing 737 and 787 are now available.

It was announced last May that Emirates is to launch a premium economy class.

Premium economy will be on the Airbus A380s that Emirates ordered last year, of which the first six will be delivered in 2020, Clark said in a company podcast on its website.