Is this the end of the hongi? NZ deputy PM says traditional greeting may have to be scrapped

Is this the end of the hongi? New Zealand’s deputy PM says traditional greeting may have to be scrapped for good because of coronavirus

New Zealand’s Deputy Prime Minister Winston Peters has been swiftly rebuked for suggesting COVID-19 might bring an end to the iconic Maori greeting, the hongi.

Mr Peters, a proud Ngati wai iwi member and the most senior Maori in Jacinda Ardern’s government, made the claim on Tuesday as New Zealand considers the reintroduction of social norms.

‘One of the things you’ve got to have regard for is whether the hongi in this circumstance is ever going to come back again,’ he said on Tuesday.

New Zealand’s Deputy Prime Minister Winston Peters has been swiftly rebuked for suggesting COVID-19 might bring an end to the iconic Maori greeting, the hongi. Meghan Markle is seen receiving a hongi from Jerry Mateparae, the High Commissioner of New Zealand to the UK, in 2019

‘There’s a famous old saying which says that cultures that don’t adapt, die.

‘Our lives and all people’s lives are on the line here,’ Mr Peters said.

‘In terms of colds, flus, influenza and COVID-19, it surely makes sense for us to consider it.’

Mr Peters referenced the devastating impact of the Spanish Flu in New Zealand a century ago, when Maori died at rates ‘eight times’ that of the Pakeha (European) population.

The world-famous nose-pressing practice, like all social interactions, has been on ice during New Zealand’s lockdown due to fears it could spread the deadly coronavirus. 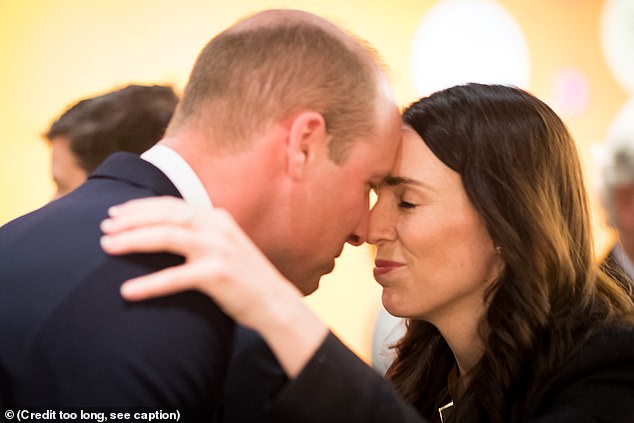 What is the hongi and why is the traditional Maori greeting so sacred to the people of New Zealand?

The hongi is the traditional Maori greeting that sees two people welcome each other by rubbing or touching noses.

It is a New Zealand tradition that comes from the Maori legend on how women were created.

The hongi is an important part of New Zealand’s culture and those who are offered the greeting should always accept, because of its significance.

If a New Zealander should perform the hongi would you, it means that you are to be ‘unified’ with the person and that you are now more than a guest.

Hongi roughly translates to ‘sharing of the breath’ and when you complete it as a guest, you are given a sense of responsibility for the island.

To display this, you may be given some tasks to complete to show your loyalty and appreciation.

In the past, you may have had to fight on the island’s behalf but in modern times you must complete personal tasks such as no trace on the island and respecting its natural beauty.

The government has included the Maori practice in its lockdown advertising, plastering posters across the country with the statement ‘Do not shake hands, kiss hello or hongi.’

Labour’s deputy leader Kelvin Davis, a Ngati manu iwi member and the Maori-Crown Relations Minister, backed the reintroduction of the practice, within time.

‘There will always be a place in Maori society for the hongi,’ he said.

‘It’s up to Maori to decide when it would be appropriate to reintroduce … to go back to our traditional ways.’

Prime Minister Jacinda Ardern agreed, saying it was up to community leaders to decide on their own ‘tikanga’, or cultural practice.

‘I have seen iwi leaders, actually determine for themselves how they are going to keep their people safe, and what they wish to do with cultural practice in this environment,’ she said.

‘There’s still absolutely a place for hongi,’ he said.

‘Just as there is for hugs and kisses between family members and loved ones.

‘I accept we’re in special circumstances now and we are seeing our freedoms gradually given back to us but I reject the idea that this is a permanent position where loved ones, family and whanau, can’t embrace in the future.’