Is this the future of air travel? BA reveals robotic air stewards and self-packing luggage

They may look like sketches from a sci-fi film – but these futuristic images are in fact a glimpse of what air travel could look like in the coming decades.

The series of photographs, which feature in a British Airways exhibition at London’s Saatchi Gallery, are inspired by a study undertaken by BA into the future of flyingcould look like in the coming decades.

One image includes a robotic air stewardess, who’s able to interpret every passengers’ needs through emotional analysis and cater to this by bringing each person what they need before they’ve even asked.

The AI, known as AVII, would produce a log for the cabin crew based on individual personal requirements, enabling them to build a stronger relationship with each traveller and deliver intuitive service.

Our next commercial carrier? British Airways have envisioned a brand new form of jet, which would resemble a UFO 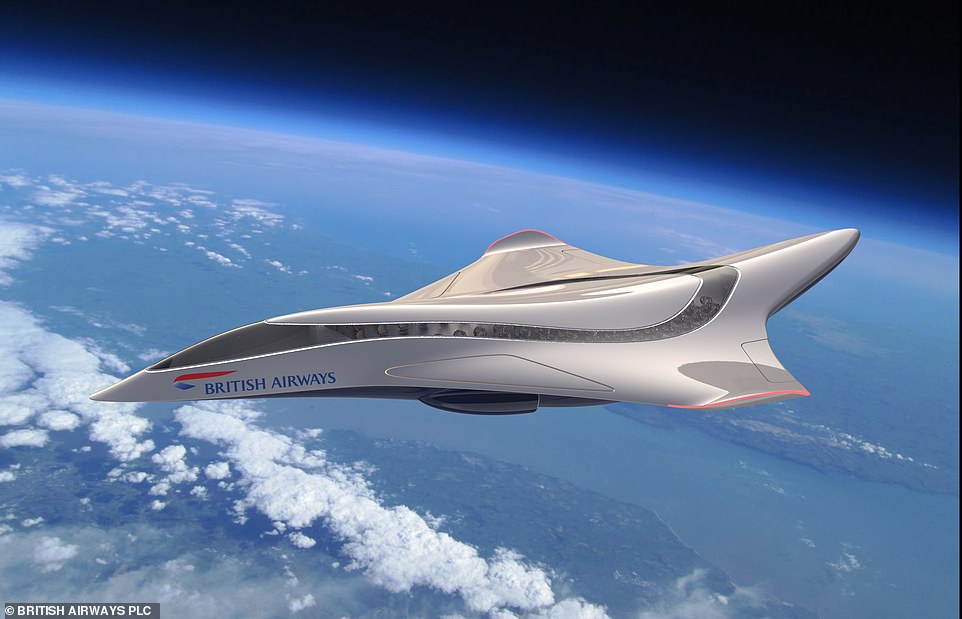 The future? The Curio, a hypersonic aircraft – meaning it exceeds the speed of sound – which circumnavigates the world, collecting travellers from ‘megacities’ as it flies on a non-stop mission

Another set of images reveals potential plans for Curio, a hypersonic aircraft – meaning it exceeds the speed of sound – which circumnavigates the world, collecting travellers from ‘’megacities’ as it flies.

Numerous smaller modular crafts would transport customers from their own homes in each of those megacities directly to the larger aircraft, all interlocking into assigned compartments.

The BA study and exhibition doesn’t stop at flying technology, with various weird and wonderful ideas for the future of luggage also included.

In one example, we are told that in 2050, a sphere-shaped device will use nanotechnology, soft robotics and bio tech developments that are currently in their embryonic stage at labs around the world, ‘AER’ will pack your belongings for you, organising them into three categories: biodegradable, fragile and compressible.

It will then use generative design to autonomously pack your items in the most efficient manner and allow owners to simply touch the section of the carrier that you wish to open and using a DNA scanning technology that identifies the owner, the carrier will open.

To double check everything is inside, run your hand over the carrier and watch as the cover transforms from opaque to transparent. Once you’re ready to go, the carrier will transport itself to the airline pick-up point and meet you at your final destination.

Using its shape-shifting features it will change its physical form to suit the environment, while protecting all your belongings. 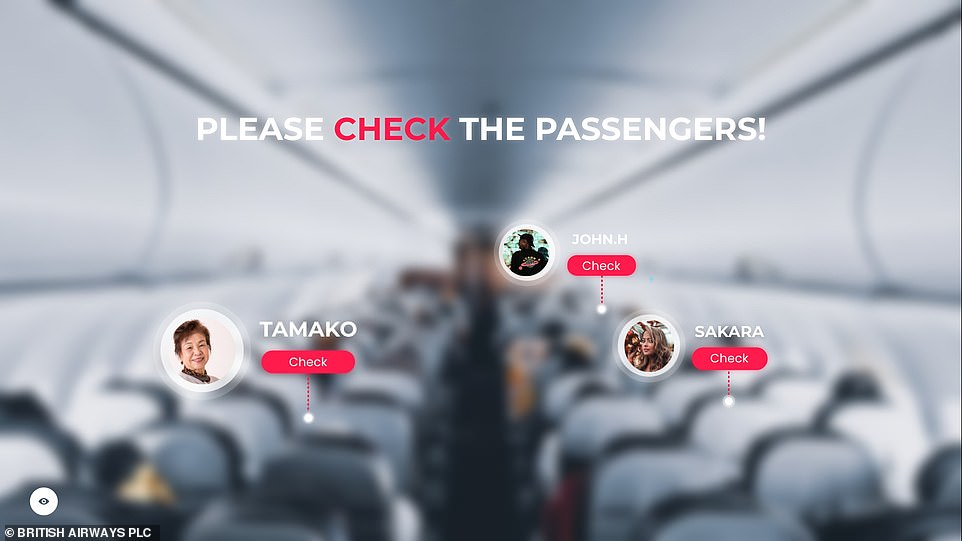 Artificial intelligence: One image includes a robotic air stewardess, who’s able to interpret every passengers’ needs through emotional analysis and cater to this by bringing each person what they need before they’ve even asked 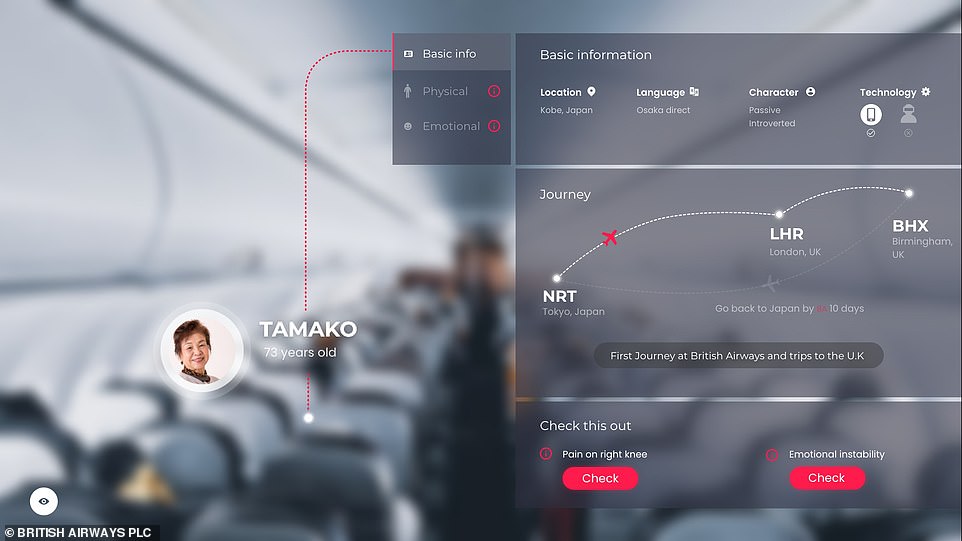 Bespoke service: In their vision, British Airways staff would be able to scan the cabin and use technology to download information about each passenger and tailor service accordingly 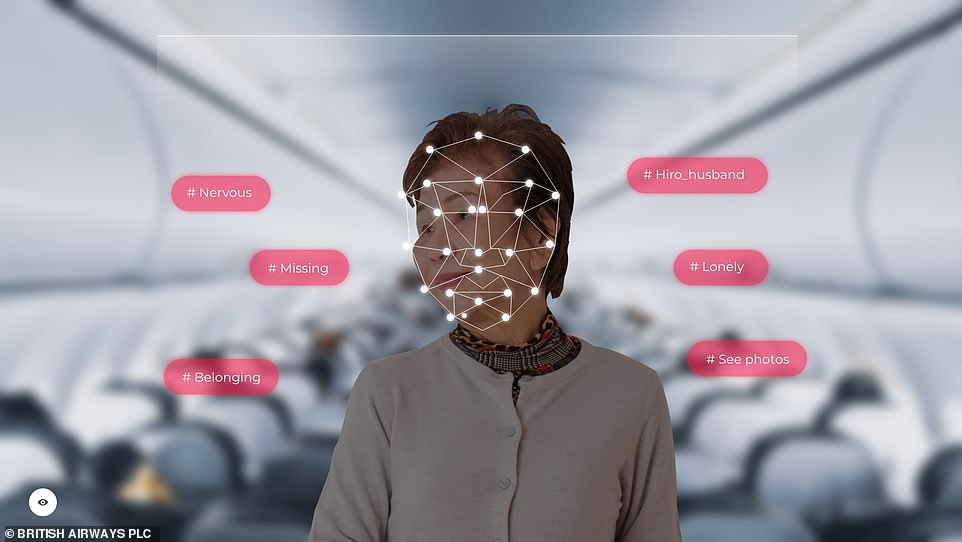 Are you OK, madam? A future passenger is analysed for her facial expressions by the AI stewardess, who’s able to decipher her mood and comfort levels during the journey 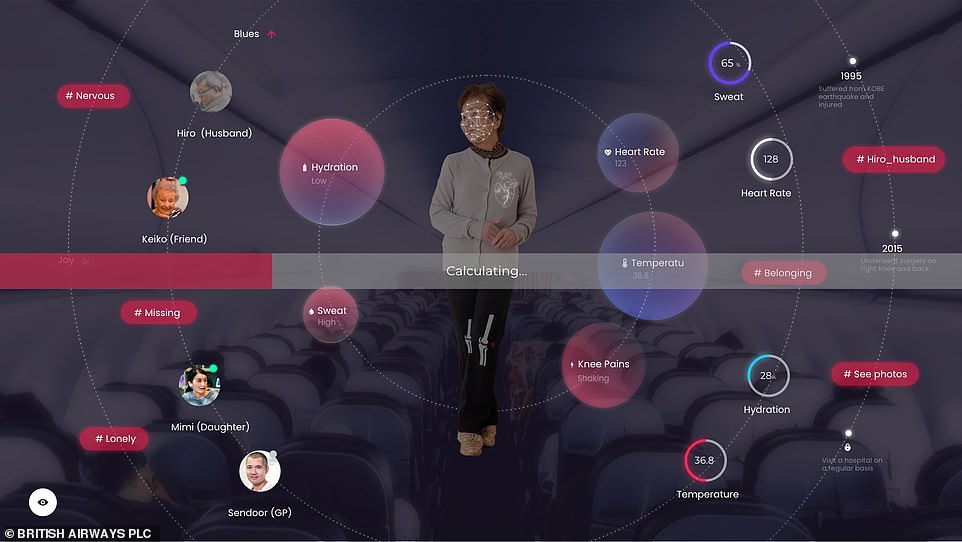 Over-delivering: The Flight of the Future exhibition was commissioned by the airline to mark its centenary year, in collaboration with the leading data-led trends agency Foresight Factory

The Flight of the Future exhibition was commissioned by the airline to mark its centenary year, in collaboration with the leading data-led trends agency Foresight Factory.

The report is one of the largest global consumer travel studies of its kind – surveying 13,000 consumers across ten countries – and consultations with leading sector experts and futurologists to offers a picture of what flying will look like in 20, 40, 60 and even 100 years into the future.

British Airways’ Chairman and Chief Executive, Alex Cruz, said: ‘The findings of the BA 2119: Flight of the Future Report not only offer us unprecedented insight into how consumers across the world feel about flying now, but what they will expect from us, as airlines, in the future.

‘In the last ten years alone, the airline industry and flight experience has changed in so many significant ways, including improved fuel efficiency, noise reduction, in cabin design and luxury. It is therefore not hard to see how, at this rate of progress, these seemingly unreal predictions will come true.

‘This is a really exciting way to mark our centenary, which has seen us remember the past, celebrate the present and predict the future in collaboration with fantastic partners from across industry and academia.’ 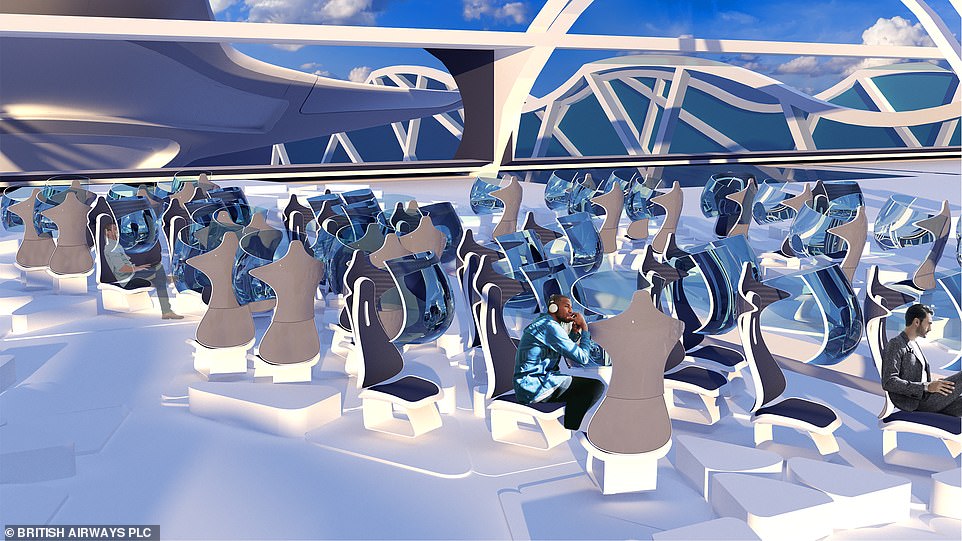 Communal space: One potential project could be a super-sized communal space, which would allow people to dine or conduct meetings in maximum comfort – as opposed to being relegated to their seats 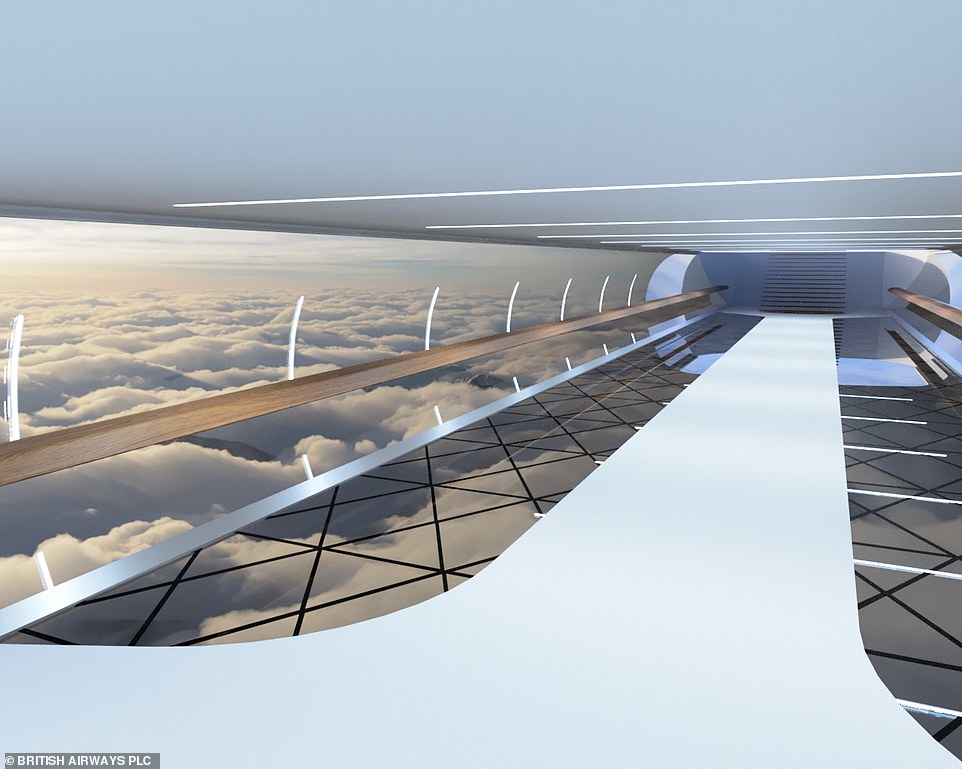 Now that’s a view! In the future, airline passengers may be able to stroll along the wings and enjoy an incredible view 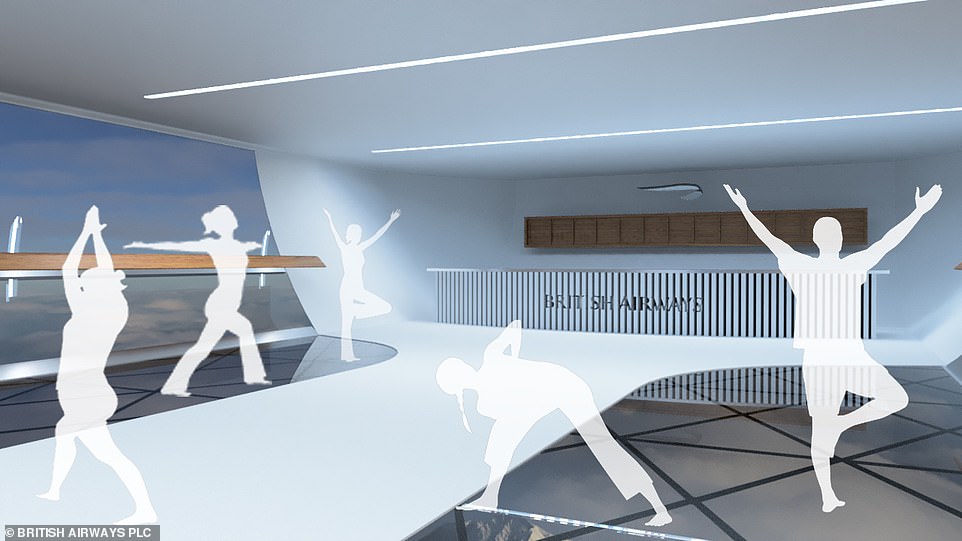 Getting fit in the friendly skies: Passenger could use their flight time to exercise and burn off their in-flight meals

The concepts in the BA 2119: Flight of the Future Report have been brought to life by post-graduate students at the Royal College of Art in a special exhibition at the Saatchi Gallery in London which runs throughout August.

Built by award winning VR creators and an Oscar-winning practical effects team, Fly enables visitors to become a time-travelling pilot, from the earliest imaginings of Leonard da Vinci and his ornithopter, to the Wright Brothers’ success on Kitty Hawk, to that first inaugural passenger flight to Paris.

Users will experience Concorde, the brand new A350 and the imagined flight of future.

WHAT IS ALTITUDE SICKNESS?

Altitude sickness can occur when you travel to a high altitude, or in this case low, too quickly.

Breathing becomes difficult because you aren’t able to take in as much oxygen.

Age, sex or physical fitness have no bearing on your likelihood of getting altitude sickness.

Just because you haven’t had it before doesn’t mean you won’t develop it on another trip.

Symptoms of altitude sickness usually develop between 6 and 24 hours after reaching altitudes more than 9,842 feet (3,000m) above sea level.