Is this the most self-centred press conference EVER?

Viewers have accused government minister Robert Jenrick of being smug and arrogant after a self-congratulatory appearance at today’s Downing Street coronavirus briefing.

Mr Jenrick, 38, is the Secretary of State for Housing, Communities and Local Government and gave today’s government update on the battle against the pandemic.

However, viewers took to social media to accuse him of bigging up the role of his own department during the outbreak, complimenting his own work and his department’s 16 times in five minutes.

Near the start of the conference, the minister hailed his department and said it had played a ‘vital role in bringing people together to tackle the virus’.

He said: ‘At the start of March I established a taskforce to support local resilience forums, standing them up at a local level across the country to prepare each and every community for a range of different scenarios

‘Recognising the unprecedented challenge we face, I took the decision to embed some of the finest military planners in the world from our armed forces.

‘This combined expertise and leadership is ensuring a consistent co-ordinated response across the country.’

He added: ‘The Prime Minister will set out on Sunday our approach to the second phase of this pandemic and as we look ahead to supporting businesses as they are able to reopen, my department will lead our work on how our local economies can adapt, evolve, recover and grow.

‘I will continue to support mayors and local government leaders who will play a critical role in this work.’

Addressing VE day celebrations, he said: ‘My department, like others, had been helping to plan some of the public celebrations but we know that sadly we will now need to mark this important occasion from home instead.’

Reacting to his comments, one Twitter user said: ‘One word describes Robert Jenrick and his delivery of the coronavirus briefing today. Smug.’

While another added: ‘Jenrick in smug and triumphant tones telling us how well he thinks he’s done and how important he is. Appalling delivery and content.

‘Hancock needs to have a word with him about tone.’

A third commented: ‘Self-satisfied, or what? Get on with it, Mr Jenrick – this is NOT a time for self-congratulation. And please don’t come back.’

Robert Jenrick has been criticised for a self-congratulatory performance at Wednesday’s Downing Street coronavirus briefing.

However, it is not the first time he has come under fire during the lockdown.

In early April, he drove around 40 miles from his own home to visit his parents in Shropshire and drop off supplies.

This came despite him urging the nations to stay at home for ‘all bar the most essential activities’.

He later insisted that he was dropping off essentials, including medicines, though neighbours said they were already doing this.

Mr Jenrick later faced questions over his decision to see out the lockdown at a house in Herefordshire, despite being the MP for Newark in Nottinghamshire.

After it emerged he traveled 150 miles from London to the country pad near Leominster – despite having a £2.5million flat in the capital – he said it was his family’s main home.

But his wesbite says that he, his wife Michal and their three daughters ‘live in Southwell near Newark, and in London’.

Mr Jenrick told the evening Number 10 press conference that the number of coronavirus deaths had increased by 649 on yesterday with the total now at 30,076.

This is not the first time Mr Jenrick has come under fire during the coronavirus outbreak.

In April he was criticised after he drove to visit his parents in Shropshire with supplies, despite urging others to stay at home for ‘all bar the most essential activities’.

The minister tweeted: ‘For clarity – my parents asked me to deliver some essentials – including medicines. They are both self-isolating due to age and my father’s medical condition and I respected social distancing rules’.

But the couple’s neighbours told the Guardian that they had already been dropping off supplies at Mr Jenrick’s parents’ house during the lockdown. This was not denied, though a source close to Mr Jenrick said he had been asked to collect and deliver medication to them too.

Commenting on the minister’s visit to his parents, the Prime Minister’s official spokesman on Friday said: ‘The Secretary of State has set out in two different statements the reasons for the journeys which he made. We’re confident that he complied with the social distancing rules.’

He later faced questions over his decision to see out the lockdown at a house in Herefordshire, despite being the MP for Newark in Nottinghamshire.

After it emerged he traveled 150 miles from London to the country pad near Leominster – despite having a £2.5million flat in the capital – he said it was his family’s main home.

But his wesbite says that he, his wife Michal and their three daughters ‘live in Southwell near Newark, and in London’.

Parliamentary expenses records show that he has claimed £100,000 in rent, council tax and travel expenses since elected in a 2014 by-election. 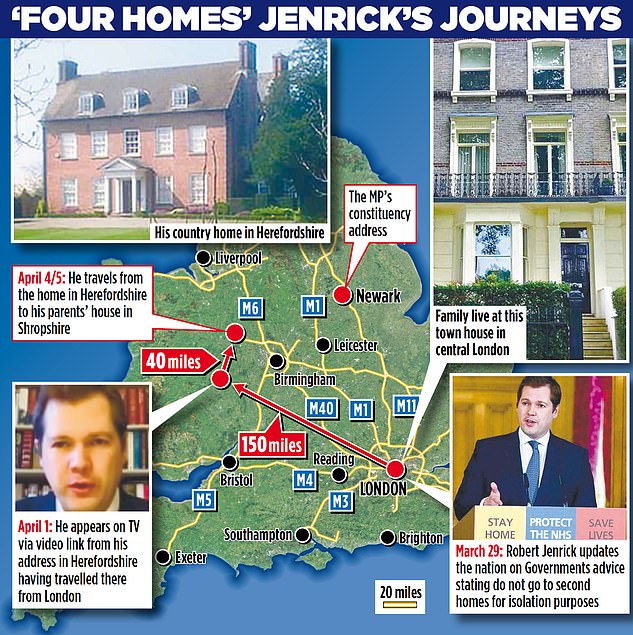 One of Mr Jenrick’s neighbours in Herefordshire said the idea that the country manor was his main home was ‘codswallop’.

The minister, a successful commercial lawyer with a string of multi-million pounbd properties, is also under fire for claiming he understands what it is like to be ‘cooped up’.

Mr Jenrick stayed in his £2.5million London home for the first six days of the lockdown until March 29 when he travelled 150 miles to his country house in Herefordshire to be with his family.

He later claimed that he considers the Herefordshire property to be the family home – but his official Conservative website says different. It fails to mention his 17th-century Grade I listed country house.

He and his wife are understood to spend most of the week in the capital because of Mr Jenrick’s ministerial work and his wife’s job as a partner for a major US law firm in the City.