Is this the new St Moritz? Investment in Switzerland’s Andermatt is paying off

Zermatt, Courchevel, Gstaad, St Moritz – they’re all starry names in the skiing firmament. And now Andermatt is doing somersaults to join them, with a level of investment and ambition that has catapulted the once sleepy little Swiss town into an Alpine superstar.

Little over a decade ago, the population of Andermatt was 1,200. Now, swimming with high-end hotels and properties, it swells to 14,000 or more on a good winter’s day.

The transformation is down to one man: Samih Sawiris, an Egyptian property gazillionaire who heard the town was for sale, and helicoptered in to check it out. 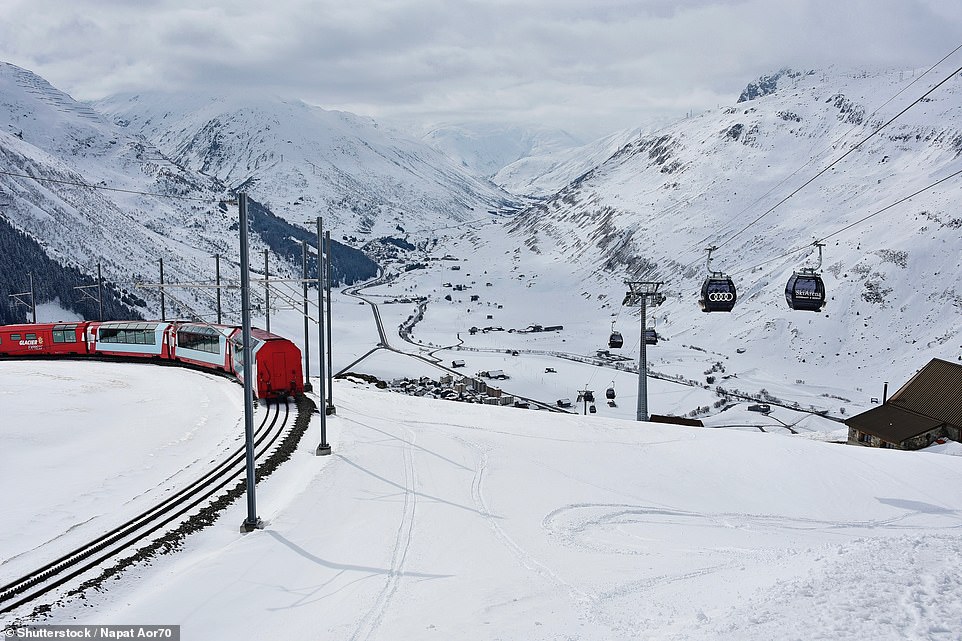 Picturesque: The Glacier Express trundles through the snowscape above Andermatt

When he called a meeting in the town hall, the mountain folk expected to hear from a man with broken English who knew all about Red Sea resorts but nothing about winter sports.

Instead, he knew all about skiing and addressed them in fluent Swiss German. The locals were charmed. So much so that 96 per cent of Andermatt voted in favour of the £1.4 billion development. Perhaps it was his bold claim during the pitching process in 2005 that the town would be ‘better than St Moritz’ that sealed the deal.

I’m spending three days here with my fiance, Dan, and, with the help of our amiable instructor Matthieus, we’re taking full advantage of the recent linking of Andermatt to neighbouring towns Sedrun and Disentis. This has created 110 miles of skiing, the largest in central Switzerland.

Once a resort purely for experts, it now caters for wobbling novices like me. What’s more, snow is reliable throughout the season, with the Ski Club of Great Britain saying Andermatt has ‘one of the best snow records in the Alps’. 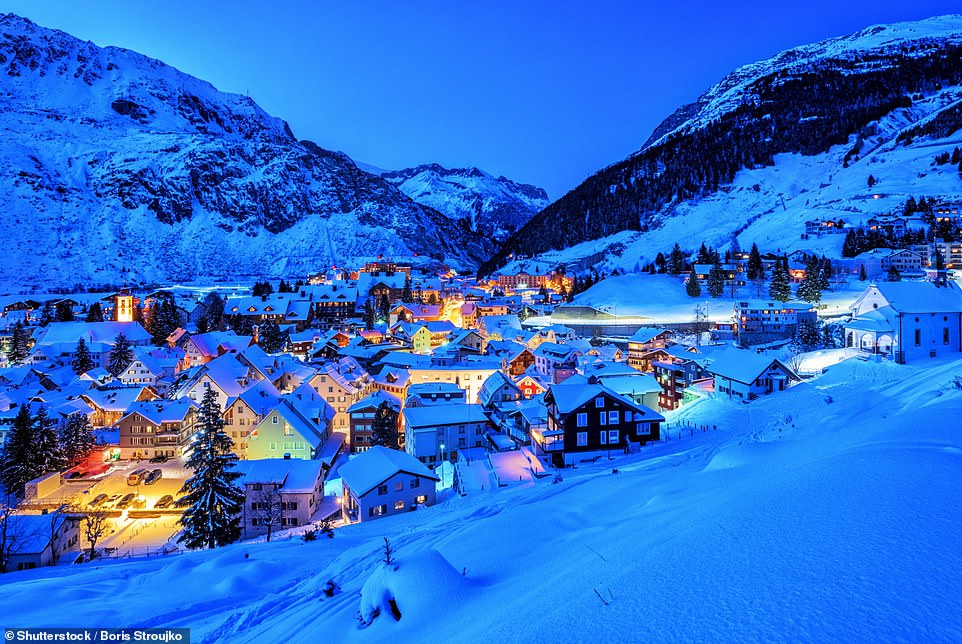 ‘Andermatt has one of the best snow records in the Alps’, says the Ski Club of Great Britain 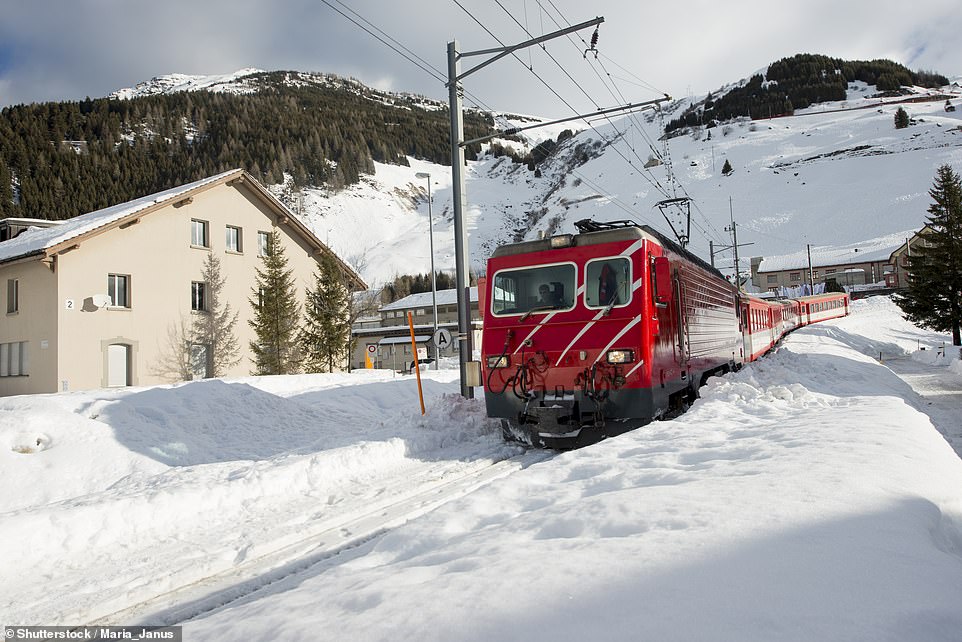 Snow progress: A train inches its way through a very wintry Andermatt 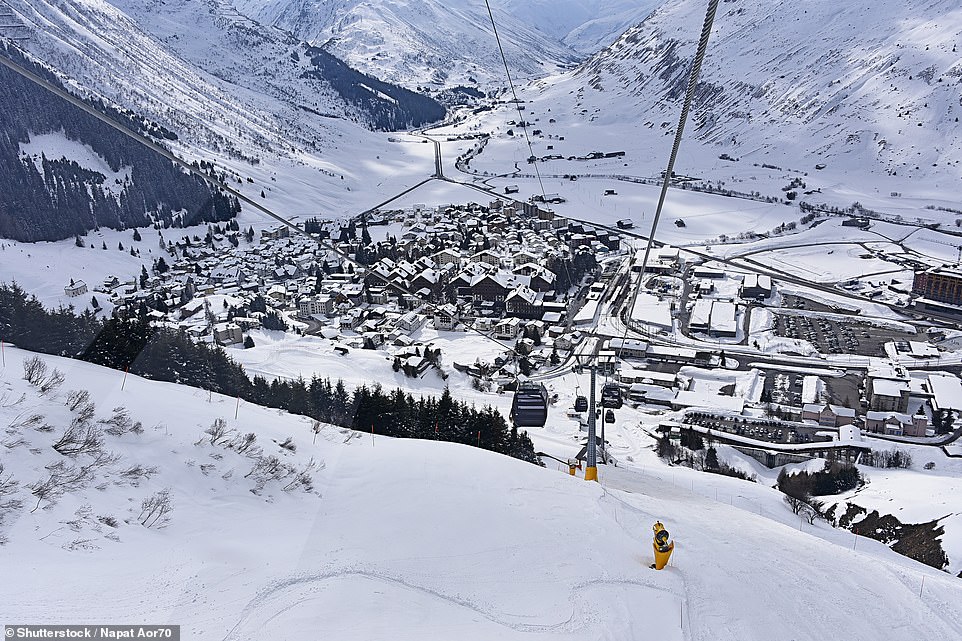 And whereas the likes of Zermatt and St Moritz specialise in pricier hotels, there are plenty of reasonably priced options.

Our base is the Radisson Blu. After a day on the slopes, we adjourn to the spa to massage our muscles with the help of the pool’s Jacuzzi-style side-benches while admiring the mountains through floor-to-ceiling windows. On one occasion, we have the spa to ourselves as we alternate between baking in the sauna and cooling down underneath the wooden bucket shower, which releases gallons of freezing water at the pull of the chunky rope.

Switzerland and mountains means fondue. So, on Matthieus’s recommendation, we walk five minutes from our hotel in the new town to Ochsen, a tiny restaurant in the centre of the old village. 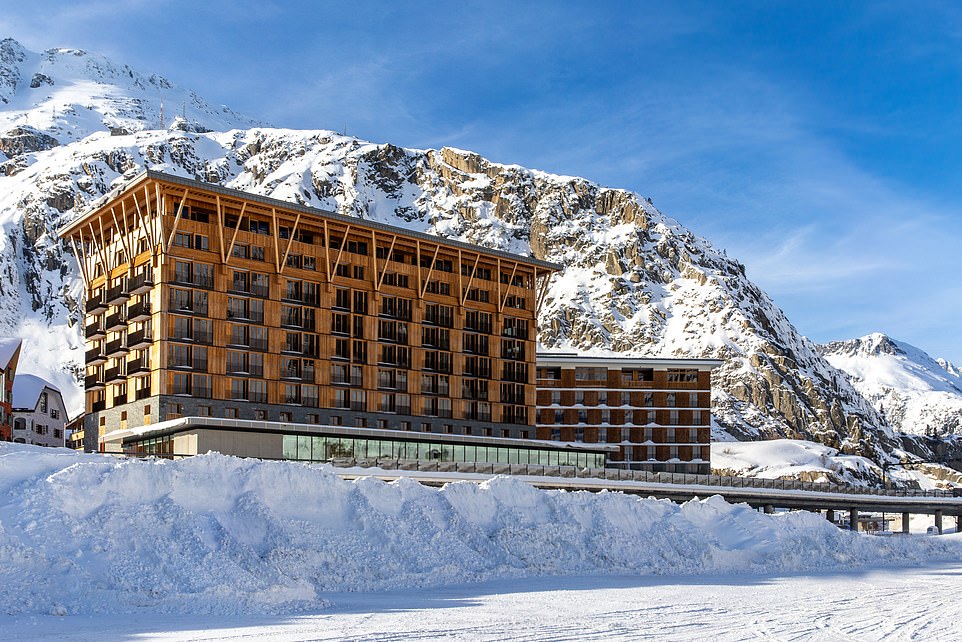 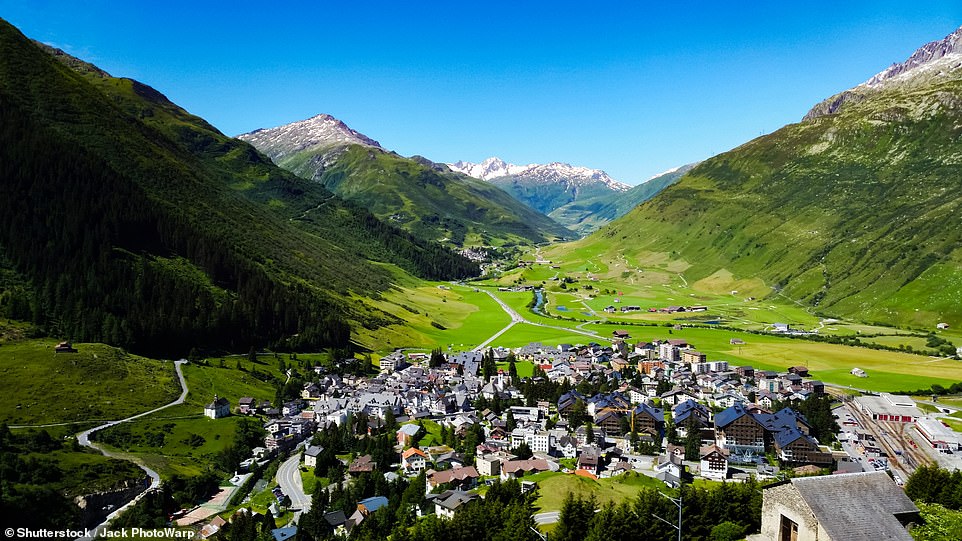 In the summer Andermatt looks just as pretty. In the winter its population swells from around 1,200 to 14,000 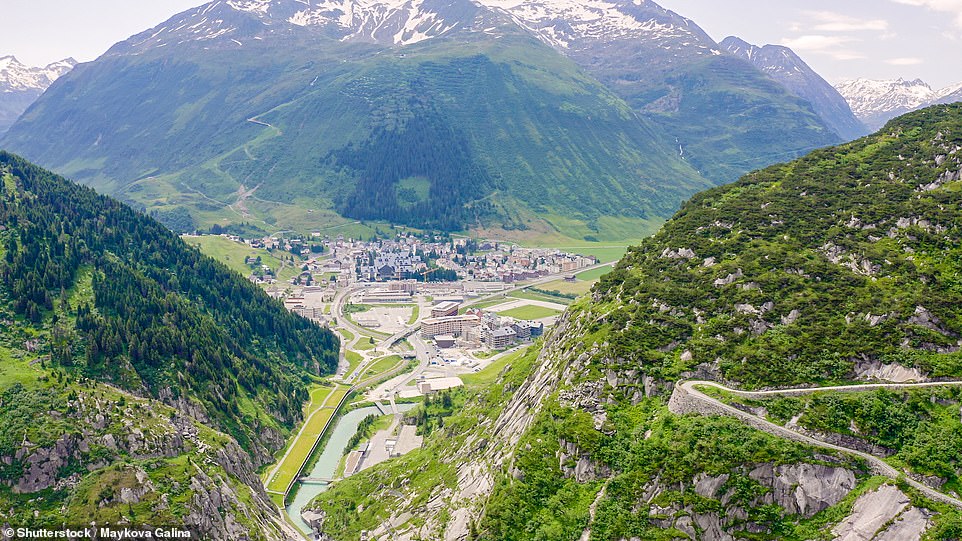 Harriet spent her last evening in the village in The Chedi hotel, a ‘dazzling’ five-star property 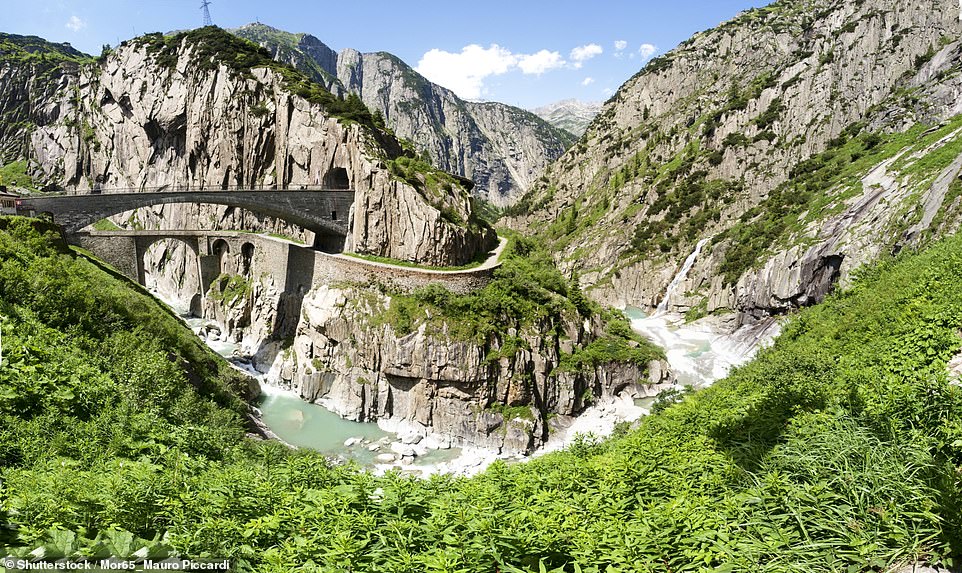 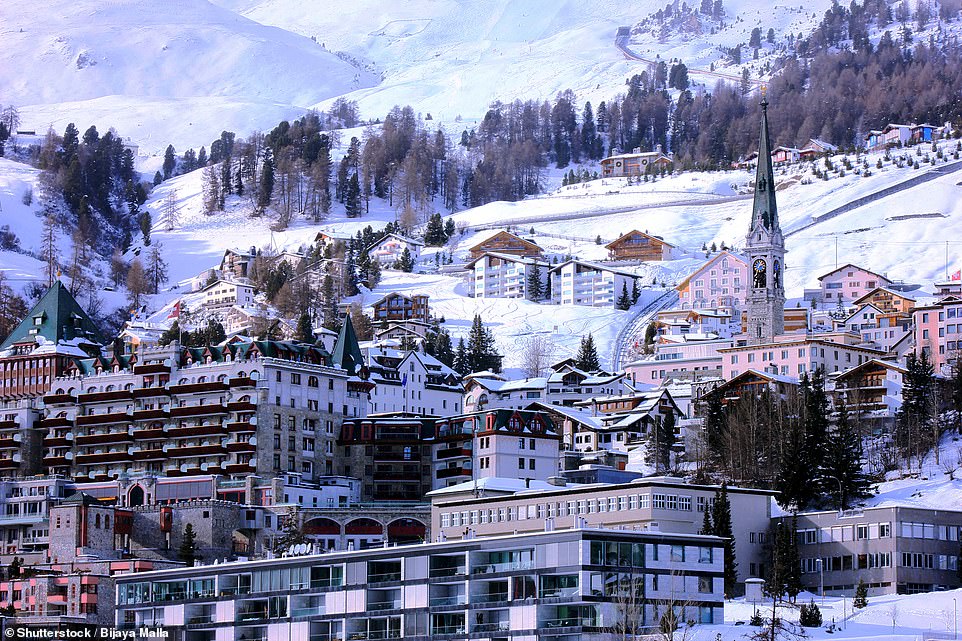 The competition: The luxury resort town of St Moritz, which has twice hosted the Winter Olympics and is home to the world’s oldest ski school

And here’s the thing about skiing.

After all that exercise it’s perfectly acceptable to gorge on raclette – a pan of bubbling cheese and herbs served with bread – and then order a second plate.

You can’t come to Andermatt without visiting The Chedi, the resort’s dazzling five-star hotel – one of the finest in the Alps – which is encased in giant twinkling pine trees and has ski butlers and 200 fireplaces.

We spend our last evening at its swanky restaurant and sit on giant benches next to giant tables with giant menus that make us feel like we’re part of The Borrowers cast.

We end with a tour of a walk-in humidor cheese room by the restaurant’s erudite manager, Angela. We whittle dozens down to ten, including a nutty gruyere, a spicy Appenzeller and a floral goats’ cheese.

Andermatt may not be St Moritz just yet, but if this hotel is anything to go by, it’s well on its way.