Is THIS the world’s strongest baby?

A father says his baby learned to stand at eight-weeks old, after being inspired by seeing him watch strongman clips on YouTube.

Tezra Finn-Johnston, 31, and girlfriend Emily Derrick, 23, who live in Kingswood, Bristol, first noticed their daughter’s strength when they left hospital.

The couple claim at that early stage she was able to support her own head.

She was born on January 31 and weighed just 5lbs 9oz and was on the 5th percentile – weighing less than five per cent of other babies her age.

Now 15-weeks-old, Lula is able to stand unassisted, supporting her own weight.

Tezra Finn-Johnston, 31, and Emily Derrick, 23, from Kingswod, Bristol, say their daughter Lula (pictured) who is just 15-weeks-old is able to stand unassisted, supporting her own weight

Tezra and Lula have been watching strongman clips on YouTube and think she might have been inspired.

The first-time dad said: ‘When she was about a month old, she was having a tantrum and I tried to sit her on my knee to calm her.

‘Instead of sitting down, she just stood on my knee and wouldn’t bend her legs.

‘I tried to hold her and supported her, and she managed to take her own weight.

‘Everyone seems to think that it’s unusual that she can hold herself up, even just sitting, let alone standing. 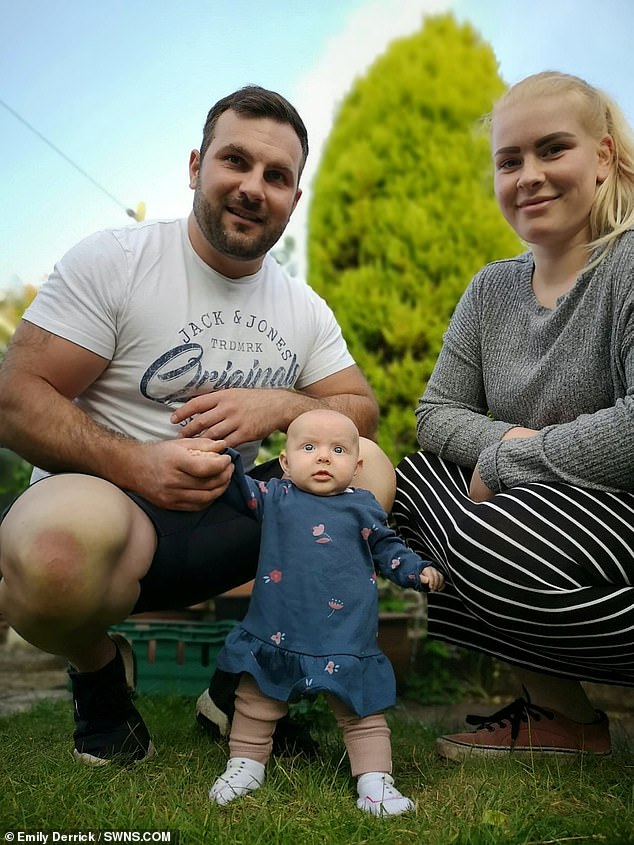 ‘I asked my mum – I’m one of four, and none of my siblings could hold their weight at her age.

‘From everything I’m reading, it should be about nine months to a year that they should be able to support their own weight.’

The pair first noticed their daughter’s strength when they brought Lula home from the hospital, five days after she was born.

When do babies start standing alone?

According to the NHS, a baby is usually able to stand supporting their own weight with both their hands being held at around 6-8 months.

Tezra continued: ‘Pretty much from the day we left hospital she was able to support her head a little bit more than we thought she should be able to.

‘She was holding it up for a few seconds and that shouldn’t be for a few weeks, but pretty much straight away she was able to do that.

‘Then we watched this Babies documentary on Netflix and on there they said babies are inherently programmed to crawl from birth.

‘So I put her down on the mat and she was trying to crawl a bit. 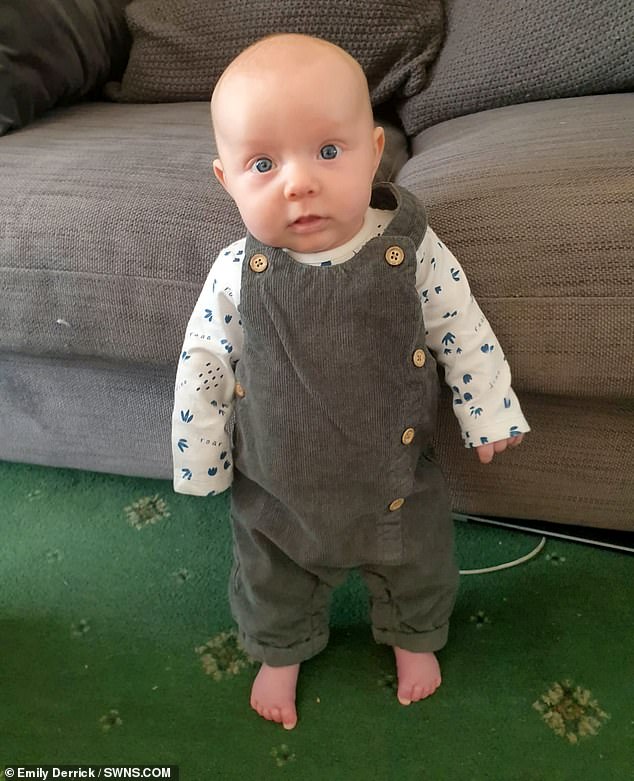 Tezra says Lula (pictured) was able to push herself up and propel herself from his hands with her legs, when he put on a mat to crawl

‘Then I put my arm behind her and she was able to push herself up the mat – propelling herself from my hand with her legs.

‘She can also do it lying on her front as well.

‘We noticed that and she was able to do that first time, so that was impressive.

‘I’m just assisting her in doing what she likes doing – the first time we did it, she smiled at me.

Tezra is a big fan of strongman competitions, regularly watching videos on Youtube.

The father who claims Lula looks engaged when they watch the videos together, jokes she might have been inspired by these to train herself. 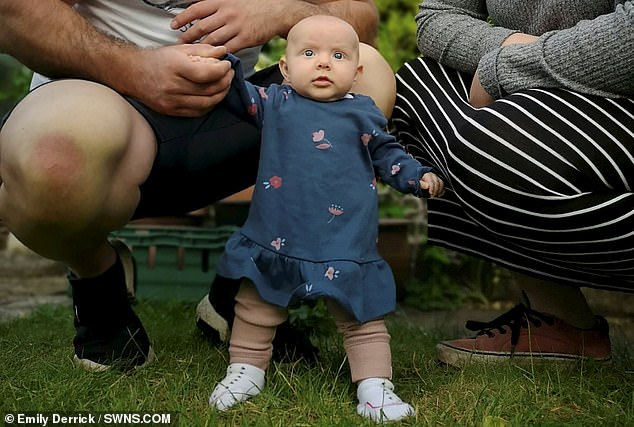 Tezra revealed he got a few ideas from Netflix’s Babies documentary, but advises others not to try the same. Pictured: Lula at 15-weeks-old, standing unassisted

Tezra thinks another reason for her strength might be a good muscle-to-weight ratio, based on the fact she was a small baby at birth.

He also states her genes could be a reason, because he’s always been able to build muscle quickly.

Tezra said: ‘I don’t advise other people to try this with their baby, but I watched Babies on Netflix, and in there I just got a few ideas from that really.

‘When I was about 13, I started doing weight training and arm-wrestling – I was able to beat adults. Since then I just took up the weights.

‘I just really enjoy being strong – not so much fit, but more the strength side of it. 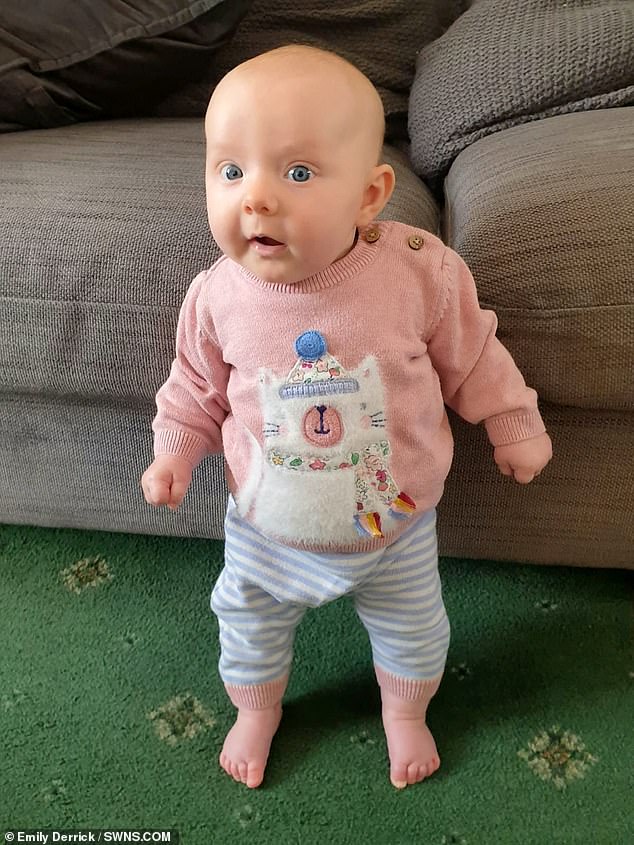 Lula (pictured) isn’t able to walk yet, but Tezra and Emily fear her first step could be closer than they think

‘I’ve always been interested in lifting as heavy as I can.

‘Only recently, since they’ve had YouTube, I’ve started watching some of the strong men on their private channels.

‘Eddie Hall, they call him The Beast – he was the World’s strongest man 2017 and he’s got his own Youtube channel, so I’ve been watching that.

‘Lula sits on my knee and we both watch that, so I like to think she is training herself.’

Baby Lula isn’t able to walk yet, but the parents are fearing her first step might be closer than they think.

Emily who is a Postwoman, said: ‘When I give her rattles and stuff to play with, she doesn’t seem young enough to want them.

‘She just seems a lot older than she actually is. 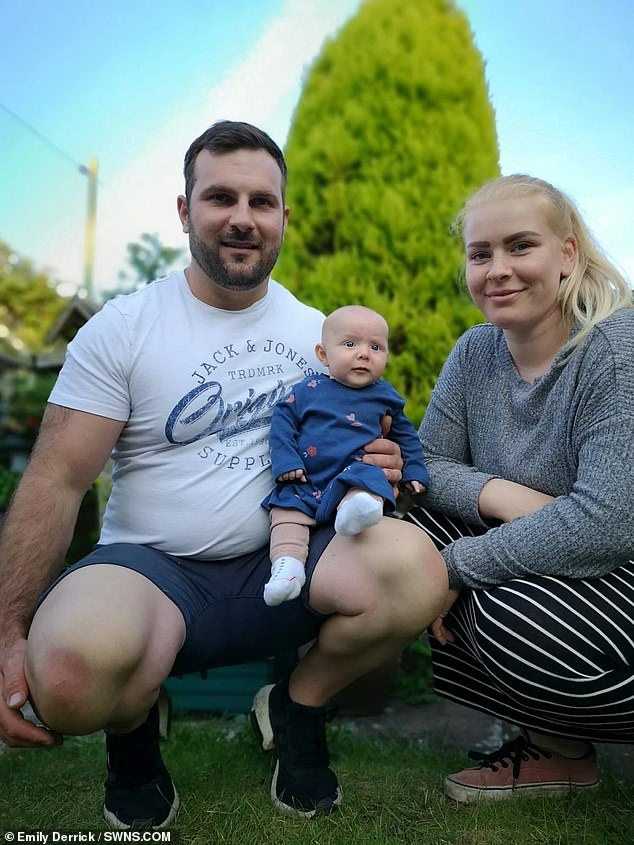 Emily claims Lula seems older than she is, saying she doesn’t like to play with rattles. Pictured: Tezra and Emily with Lula