Is your airline SPYING on you? Passenger finds camera embedded in his Singapore Airlines TV screen

Is your airline seat SPYING on you? Passenger finds a CAMERA embedded in his in-flight TV screen

Could airlines be using secret cameras hidden in TV screens to spy on their customers at 38,000 feet?

A Singapore Airlines passenger discovered to his alarm that his TV screen on a recent flight with the carrier had a camera embedded in it.

While Singapore has said the camera is disabled, it’s led some to speculate that other airlines might have the same system but with the cameras switched on. Or that in-screen working cameras could be used to spy on passengers during flights in the future.

Concern was raised earlier this week when traveller Vitaly Kamluk boarded a Singapore Airlines Boeing 787 flight and noticed a tiny camera at the bottom of his seat-back in-flight entertainment screen. It was unclear where he was flying from or to.

Mr Kamluk took a picture of the screen, circling the small camera, and posted it to Twitter asking why it was there.

He tweeted: ‘Just found this interesting sensor looking at me from the seat back on board of Singapore Airlines.

‘Any expert opinion of whether this a camera? Perhaps @SingaporeAir could clarify how it is used?’

Almost immediately, Singapore Airlines responded to Mr Kamluk to confirm it was a camera, but said it was not switched on and that there are no plans to use them as cameras.

The carrier tweeted: ‘We would like to share that some of our newer in-flight entertainment systems provided by the original equipment manufacturers do have a camera embedded in the hardware. 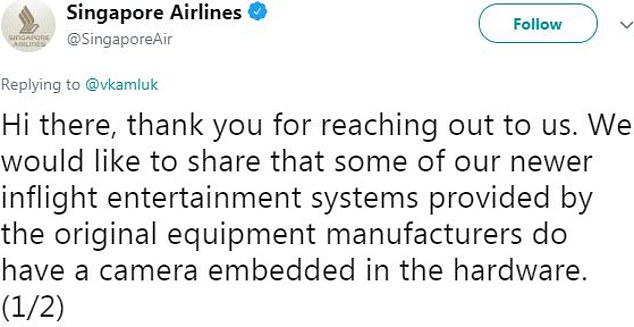 In a series of tweets, Singapore Airlines confirmed there are cameras in the in-flight entertainment screens but that it has no plans to switch them on

‘These cameras have been disabled on our aircraft, and there are no plans to develop any features using the cameras.’

Another on social media then asked the airline why the screens have a camera if it has no plans to use them.

The carrier responded: ‘These cameras on our newer IFE (in-flight entertainment) systems were provided by the original equipment manufacturers. We have no plans to enable or develop any features using the cameras.’

It begs the question that if IFE systems are being made by manufacturers with cameras, could different airlines actually be using them, if not now but in the future?

Claire Reilly, an editor for electronics website CNET, wrote in a blog post: ‘You can bet that the “original equipment manufacturers” who installed these cameras weren’t trying to meet a growing demand for seat-cam footage of tired plane passengers.

‘We aren’t livestreamed entertainment in this grim, dystopian future: We are an audience to be marketed to, data to be mined and a captive set of eyeballs to be coerced.

‘Cameras are in our advertising billboards, in our devices and on every second street corner, tracking our movements and slowly building up a picture of our lives in minute-by-minute real time. Add airplanes to the mix and you have a terrifying new way to calculate your social credit score.’