ISIS claims it is ‘stronger than ever’ with new generation

Triumphant Iraqi soldiers parade the streets of Mosul as Raqqa lies in ruins.

Once ruling an area the size of the UK, ISIS now clings on to just 10 per cent of its failed proto-state.

Experts believe it will reincarnate as an underground insurgency while gathering support in Africa – but ISIS leaders are far from lowering the black flag of the Caliphate.

New propaganda claims the group is ‘stronger than ever before’ because a generation of young boys is ready and willing to fight to the death.

New propaganda claims ISIS is ‘stronger than ever before’ because a generation of young boys is ready to fight to the death. Pictured: Previous ISIS video propaganda 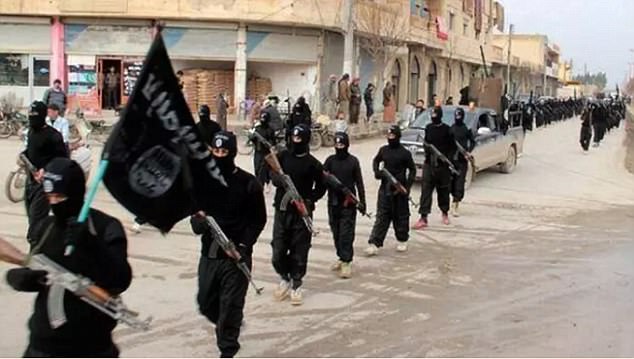 Once controlling an area the size of the UK, ISIS now clings on to just 10 per cent of its failed proto-state. Pictured: ISIS fighters in Raqqa at the height of the proto-state’s power

The group’s latest al-naba newsletter released online on Thursday claims ‘many cities’ across Syria and Iraq are ‘filled with faithful believers’.

The editorial claims the Caliphate ‘is stronger than it was at the first stage’ because it has ‘generations ready to fight.’

The group has long emphasised the training of young boys, which it calls ‘cubs’, often showing them carrying out shootings and beheadings in gruesome propaganda videos.

The article asks the ‘true believer’ to act regardless of ‘whatever is lost’ and ‘fight the infidels wherever they are, everywhere they are.’

Refuting the western narrative that ISIS is almost defeated, it adds: ‘Because of the firm foundation on which this state was founded… we say that the results that our enemies see in the near term are not what we see.’

The reality, in fact, is that the final ISIS fighters are struggling to hold its last remaining territory on the Iraq-Syria border. 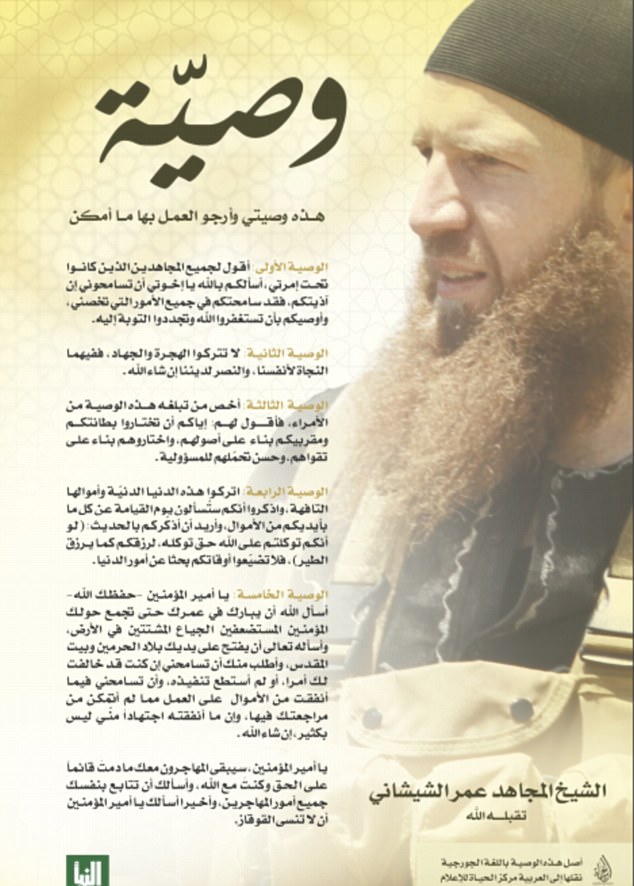 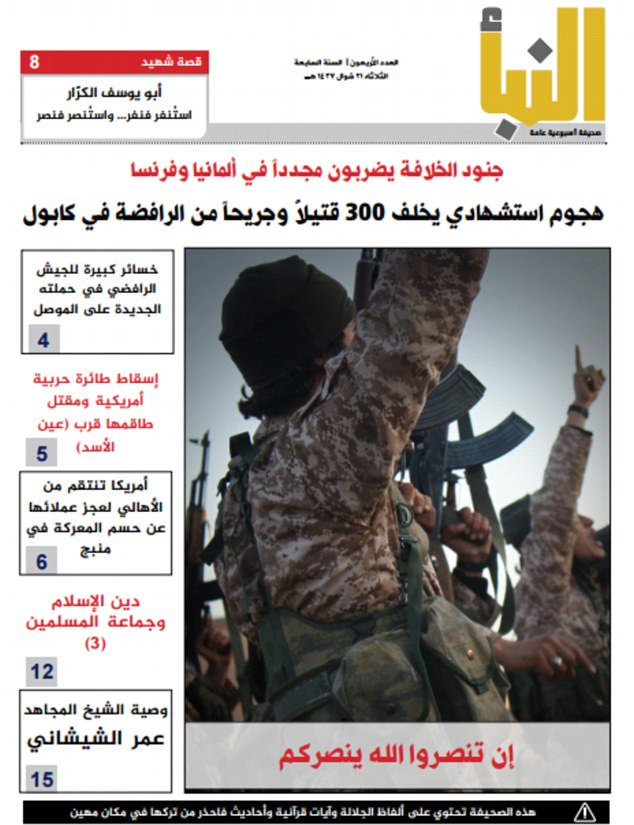 Syrian and Iraqi forces closing in on the last scraps of Islamic State’s caliphate straddling the remote border area between the two countries have already witnessed the jihadists’ likely response.

While their comrades mounted last stands in their Syrian capital of Raqqa and the city of Hawija in Iraq, IS militants seized the Syrian town of al-Qaryatayn and launched its biggest attack for months in Ramadi late last month. That is the kind of guerrilla insurgency both countries foresee IS turning to.

‘It is expected that after the Daesh terrorist organisation’s capacity to fight in the field is finished, its remnants will resort to this type of (guerrilla) operation. But for a certain period of time, not forever,’ said a Syrian military source, using an Arabic acronym for Islamic State.

The continued ability for IS to mount attacks in areas where it was thought to have been eliminated will hinder efforts to stabilise regions when the fighting wanes. 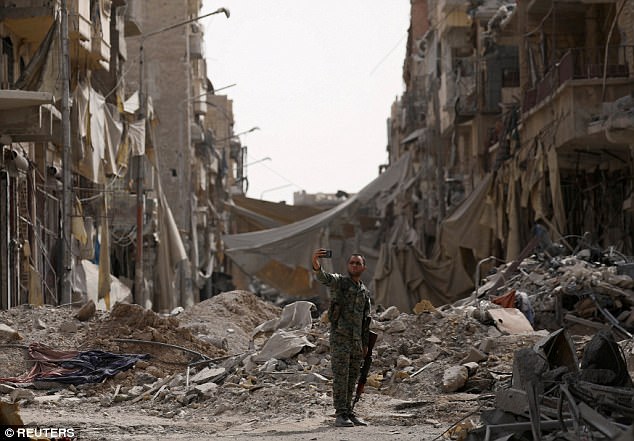 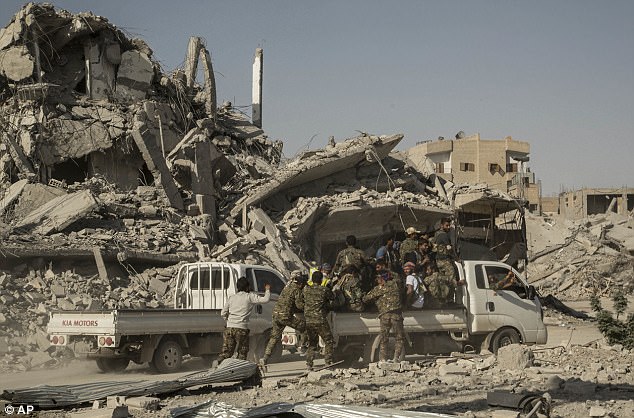 Members of the U.S.-backed Syrian Democratic Forces (SDF) ride near near the main traffic circle in Raqqa Syria

In Iraq, where Islamic State originated, it has a proven record of falling back upon local networks from which it can rise anew when conditions allow. So far, it has not shown it has the same capacity in Syria, and it might find doing so more challenging there than in Iraq.

The sectarian divisions on which it thrives are less pronounced in Syria, and it faces competition there for jihadist loyalty from other powerful militant groups.

‘Daesh is in essence an Iraqi organisation, it will survive to some extent in Iraq. Syrian members will dissolve in other Syrian Salafi jihadist groups,’ said Hisham Hashami, an adviser on Islamic State to the Iraqi government.

But in both countries it has shown it can exploit holes left by overstretched enemies to carry out spectacular attacks – the one in Syria’s al-Qaryatayn most clearly – that spread panic and tie down opposing forces.

It has also proved able to carry out bombings and assassinations in areas controlled by the Iraqi and Syrian governments, US-backed Kurdish militias and rival jihadist rebel groups, signalling an ability to survive underground.

A jihadist from a Syrian rebel faction opposed to Islamic State said the group had won enough support among young men to give it a latent capacity to revive.

‘I believe that it is possible, given that its ideology has spread widely among the youths, that something new will emerge,’ the jihadist said, pointing to the highly effective propaganda machine deployed by Islamic State over the last three years. 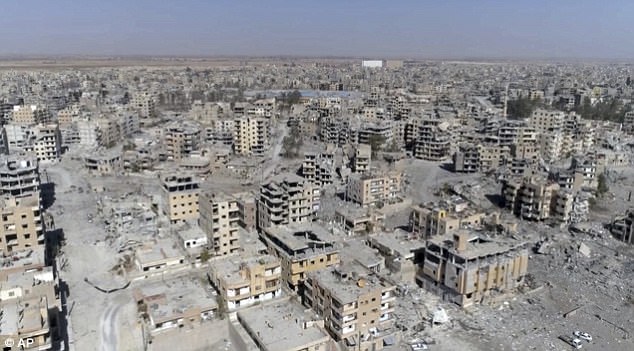