ISIS commander code-named ‘Prince of Battles’ is captured in Iraq

ISIS commander code-named ‘Prince of Battles’ because of the large number of assaults he took part in, is captured in Iraq

An ISIS commander known as the Prince of Battles because of the number of attacks he took part in has been captured in Iraq, local media reports.

The terrorist was arrested on Sunday in western Mosul having fled to Iraq from Syria, where ISIS is staging its last stand.

He ‘was involved in several fights against security forces in Anbar province’ which sits along the border with Syria, Iraq’s Alghad Press agency reported.

Mosul became a stronghold for ISIS after the terror group captured it in 2014 in an assault which announced the group to the world as a major security threat.

It was from the minaret of Mosul’s Great Mosque of al-Nuri that Abu Bakr al-Baghdadi proclaimed ISIS’s ‘caliphate’ before the city was recaptured in 2017, though not before the terror group destroyed the mosque.

Now, with it’s so-called caliphate in ruins, many ISIS fighters have fled back into Iraq in the hopes of fighting a guerrilla war against the government.

‘He has just returned from Syria, where he escaped after the liberation of Iraqi territories from the terrorist group.’

At the height of its power, ISIS controlled a swathe of territory that covered much of northern Iraq stretching to the outskirts of Baghadad, across to Aleppo in Syria. 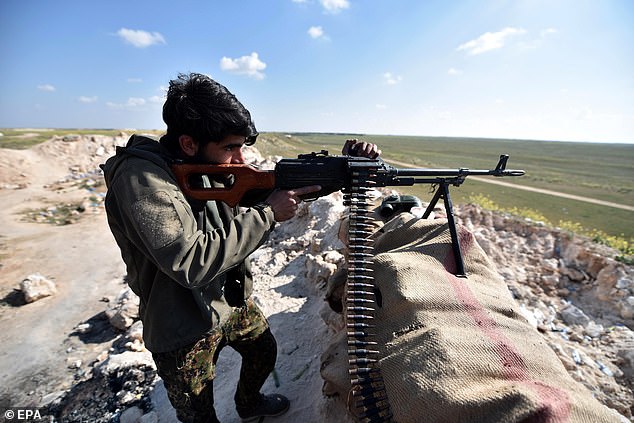 At its height ISIS controlled a swathe of territory across Iraq and Syria but has since collapsed and now controls a small enclave near the town of Baghouz, Syria, which is surrounded (file)

It has now lost 99 per cent of the territory it once controlled and is staging a last holdout near Baghouz, in Syria.

Every day, hundreds of fighters, their families and civilians are either fleeing or being captured by the advancing forces, including a number of foreigners.

With the terror group facing ruin, President Trump has vowed to pull US troops out and hand responsibility for containing the remaining fighters to Turkey.

The US has also told its allies to take any ISIS members on foreign soil back home, or risk having them turned loose.

That includes British ISIS bride Shamima Begum, who fled east London to join the group in 2014, before being found in a refugee camp earlier this month.

She has been stripped of her British citizenship and banned from returning to the UK after the Home Secretary deemed her a security risk, but her family has threatened a legal challenge.