ISIS killer ‘was summoned to meet anti-terror cops before rampage’

The ISIS gunman who killed four people in France last week had been summoned to meet anti-terror police shortly before his shooting rampage, it has emerged.

Radouane Lakdim, a Moroccan-born French national, had been on a list of suspected extremists since 2014 and was being monitored, sparking criticism of the country’s security services.

The 25-year-old killed four people and injured four others on Friday in three separate shootings in the towns of Carcassonne and Trebes, where he took hostages at a supermarket before being shot dead by police.

A police source has since revealed Lakdim had been sent a letter in March asking him to arrange a face-to-face meeting with agents from France’s domestic intelligence agency DGSI.

The attempt to engage with Lakdim emerged as France says farewell to one of his victims, hero policeman Arnaud Beltrame, who died saving hostages at the supermarket in Trebes.

France is preparing to say farewell to hero policeman Arnaud Beltrame who died saving hostages from ISIS killer Radouane Lakdim. Beltrame’s coffin is pictured being loaded on to an aircraft at Carcassone airport this morning 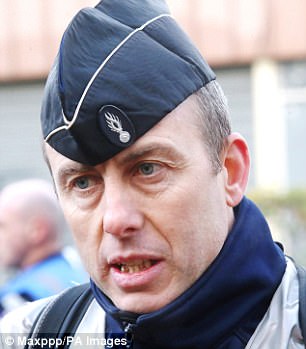 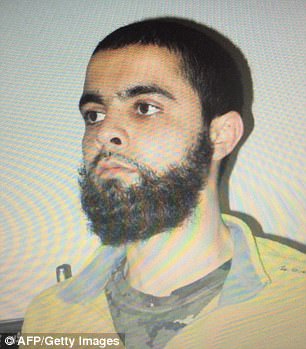 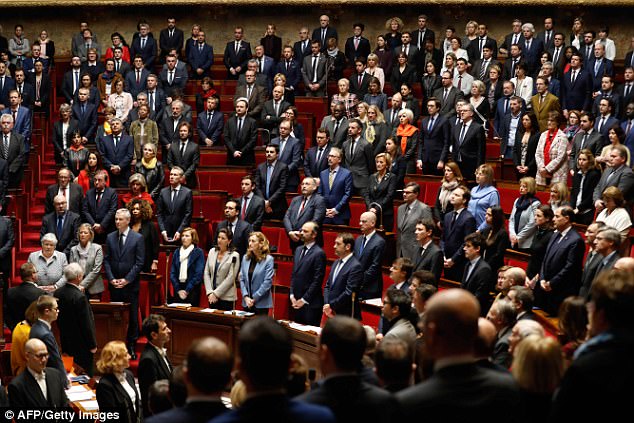 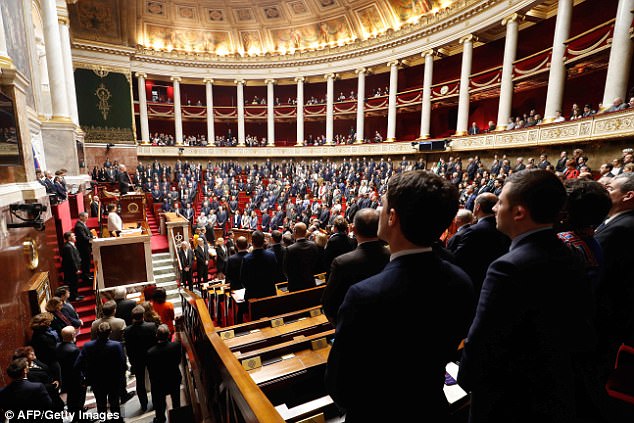 French President Emmanuel Macron will lead a national commemoration on Wednesday for the officer, who agreed to swap himself for a captive but was then killed by Lakdim who slit his throat.

The ceremony will be held in the main courtyard of the Invalides monument, home to Napoleon’s tomb, in the presence of Beltrame’s family and the families of other victims of the attack.

Three people, including Beltrame, were killed in the supermarket while a fourth person was killed earlier during a carjacking in the nearby city of Carcassonne.

The fact that Lakdim was on France’s terror watchlist has led to accusations from the right and far-right that Macron’s government is too soft on Islamists, while far-right leader Marine Le Pen has called for the interior minister to resign.

Experts point out that France has around 20,000 people suspected of being Islamic extremists and security forces have been successful in thwarting a series of attacks in recent years thanks in part to tough new anti-terror laws.

Since the violence on Friday, police have arrested Lakdim’s 18-year-old girlfriend, a radicalised Muslim convert, as well as a 17-year-old friend.

A French prosecutor said yesterday that the girlfriend is a radicalised convert to Islam and that she shouted ‘Allahu akbar’ or ‘God is Great’, when she was arrested. 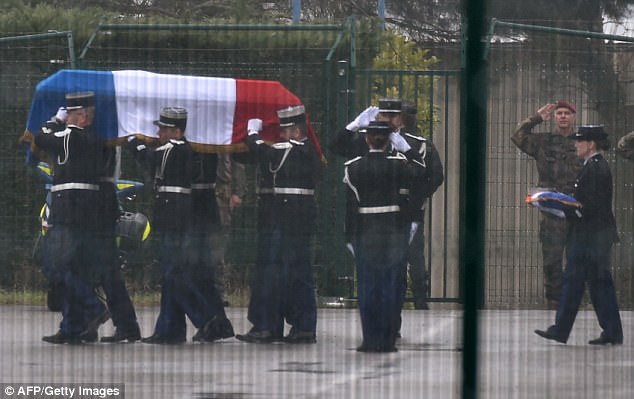 French President Emmanuel Macron will lead a national commemoration on Wednesday for Arnaud Beltrame. French gendarmes carry a coffin draped in the national flag containing the body of their slain colleague this morning 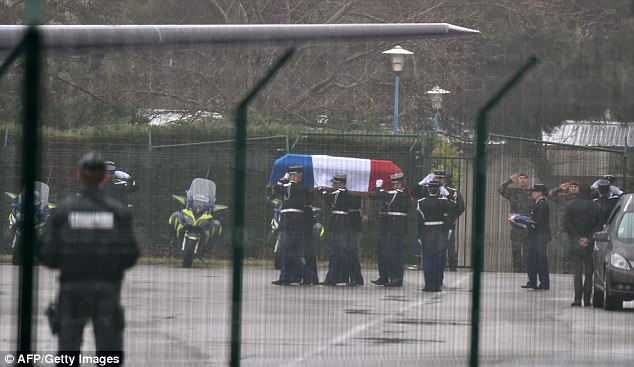 A ceremony will be held in the main courtyard of the Invalides monument, home to Napoleon’s tomb, in the presence of Beltrame’s family and the families of other victims of the attack

She was taken into custody hours after Lakdim, killed four people on Friday before being killed by police who stormed the supermarket in Trebes.

The woman told investigators that she converted to Islam when she was 16. She denied ‘having been informed and associated with the deadly project of her boyfriend,’ Molins said during a news conference.

But Molins said the girl posted online a Quran verse ‘indicating that infidels were promised to hell’ just a few hours before the attacks.

On Friday, Lakdim carried out the attacks in Carcassonne and Trebes after dropping his younger sister at school in the morning, Molins said. 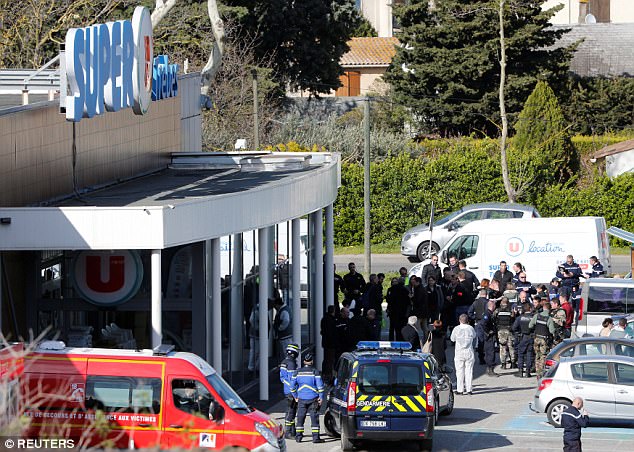 The 25-year-old killed four people and injured four others on Friday in three separate shootings in the towns of Carcassonne and Trebes, where he took hostages at a supermarket before being shot dead by police

ISIS claimed that the attacker was answering its call to target nations in the U.S.-led coalition fighting jihadists in Syria and Iraq.

When Beltrame entered the supermarket during the hostage situation, he started a negotiation with Lakdim, who had found shelter in the store’s vault with the hostage.

‘He (Beltrame) raised his hands in the air, dropped his weapon and asked to take the place of the person taken hostage,’ Molins said.

A few minutes after Beltrame entered the vault and offered himself as a hostage, Lakdim released the woman he was holding.

Beltrame then contacted his colleagues to ask them to leave the premises. He added the attacker was demanding the release of Salah Abdeslam, the sole surviving assailant of the November 13, 2015, attacks in Paris that left 130 people dead.

Beltrame surreptitiously left his cellphone on so that police outside could hear what was going on inside the supermarket. Molins said that several explosive devices were placed around the supermarket by Lakdim and the attacker threatened to set them off. 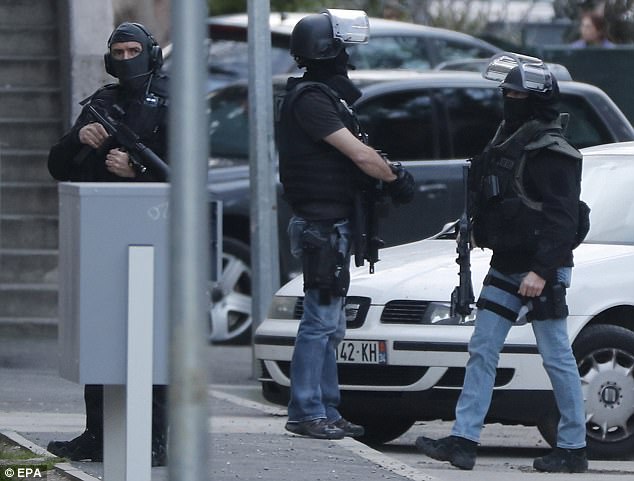 French Police raid the apartment of Redouane Ladkim in the Ozanam district of Carcassonne, on March 23

Beltrame died in a local hospital on Saturday from several stab wounds ‘including a very severe injury in the trachea and larynx,’ Molins said.

The prosecutor said Lakdim arrived in France with his family in 1992 soon after he was born in Morocco.

Both a French and Moroccan national at first, he was then naturalised as a French citizen in 2004 when he was 12, following his father’s naturalization.

Molins said Lakdim had been listed on a police register for radicalized people since 2014 because of its suspected links with the local Salafist circles. He was still under an ongoing and effective intelligence monitoring in the days leading up to the attacks, the prosecutor said.

But the surveillance didn’t allow police to detect any warning signs that he was going to commit a violent action or any intention to go to Iraq or Syria, Molins said. When he was jailed in 2016, the prison administration noticed no visible sign of radicalisation.