Islamic State has killed 41 US-backed fighters in Syria who are battling to force the jihadists from their stronghold.

Suicide bombers were sent to the city of Hajin on the Iraqi border as part of a counter-attack against the Syrian Democratic Forces’ advance.

The American-backed coalition fighters had been trying to oust the jihadis from the city when the attack took place yesterday, a war monitoring agency said.

The SDF launched an offensive against the jihadists last month in the Hajin pocket on the eastern banks of the Euphrates, in Deir Ezzor province and as a result ISIS has staged a bloody fightback.

Five Syrian men were executed by ISIS earlier this month in Hajin in Syria on the border with Iraq, where the jihadi group have dug in against an offensive by US-backed forces 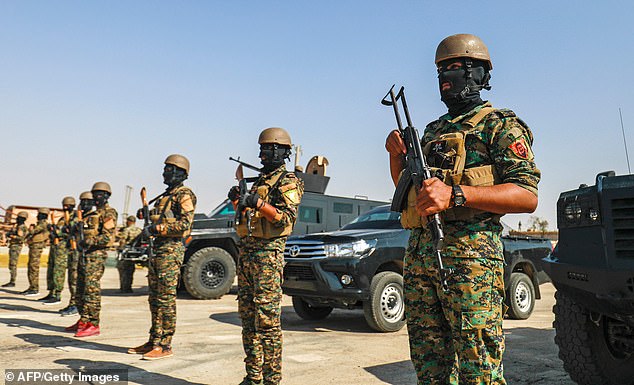 Members of the Syrian Democratic Forces (SDF) gathered in the town of Shadadi last month. Around 41 fighters were killed in a suicide attack last night

The IS-linked Aamaq news agency said that more than 40 SDF fighters were killed and posted a video of six gunmen captured alive.

The monitoring group said the fighting continued until early this morning and that IS gunmen attacked SDF positions on the eastern banks of the Euphrates river in eastern Syria.

SDF fighters have been on the offensive since September under the cover of airstrikes by the US-backed coalition to capture the last IS-held pocket in Syria.

In a statement on the Telegram messaging app, IS said it had attacked the village of Sousa late last night and detonated a car bomb near the village of Al-Baghuza further south, down the Euphrates river.

Last week in the same city ISIS executioners killed five Syrian ‘spies’ in the same region where they kidnapped 700 refugee hostages from the Al-Bahra refugee camp, including 90 jihadist widows.

Since September 10, 270 SDF fighters and 496 IS jihadists have been killed in the offensive, the observatory says.

The coalition estimates that 2,000 IS fighters remain in the Hajin area. 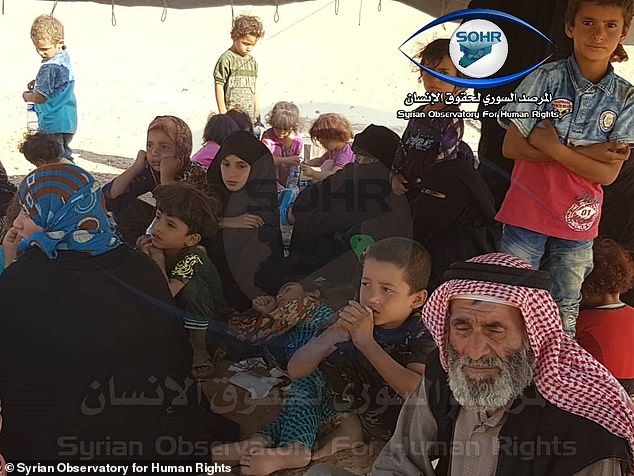 The Syrian Observatory for Human Rights said refugees were displaced from the Hajin area in after Islamic State attacked and abducted 130 families, including 90 women 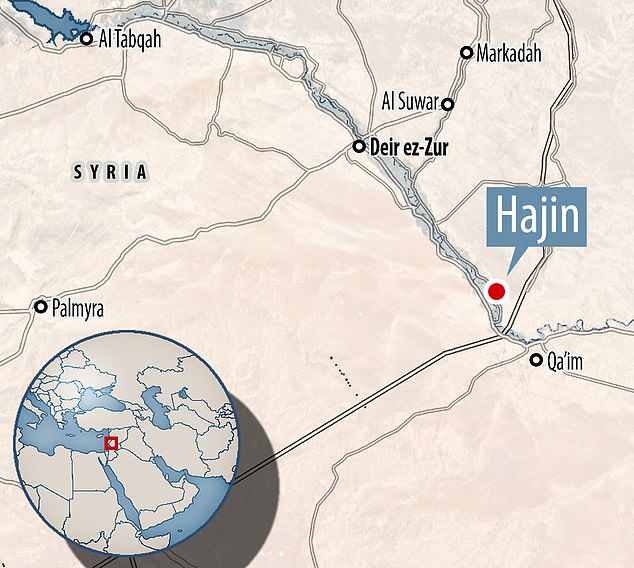 Last week, the observatory said coalition air strikes had killed 41 civilians in Sousa, 10 of them children, on October 18 and 19.

But the coalition said it had targeted an IS command post on October 18, and denied carrying out any strikes in the area the following day.

Six days later ISIS fighters attacked eight positions of the SDF, north of the town of Hajin in the southeastern Deir Ezzor countryside, killing eight and capturing three others.

Islamic State jihadis overran large swathes of Syria and neighbouring Iraq in 2014, proclaiming a ‘caliphate’ across land it controlled.

But the jihadist group has since lost most of that territory to various offensives in both countries.

In Syria, its presence has been reduced to parts of the vast Badia desert and the Hajin pocket.

Syria’s war has killed more than 360,000 people since it erupted in 2011 with the brutal repression of anti-government protests.